ABSTRACT: Chlorella pyrenoidosa is a fresh water microalgae used as substrate for production of value added products like biodiesel. In this investigation C.pyrenoidosa was grown for ten days in an internally illuminated bubble column photobioreactor at:  450 lux green light (495–570 nm), 480 lux red light (620–750 nm), 1663 lux blue light (450–495 nm), 1986 luxwhite light (380 to 750 nm).The results after a period of ten days of growth, showed that C.pyrenoidosa has grown better under blue light when compared to the other types of light. C.pyrenoidosa biomass produced 33.8% of lipid contentwhen grown under blue light, indicating its potential as alternative source of biodiesel.

INTRODUCTION: The world has been facing energy crisis in the last decade, in conjunction with irreversible reduction of traditional material of fossil fuels, unsustainable use of energy, accumulation of greenhouse gases in the atmosphere and global warming problem. With the necessary need to decrease carbon production and the decreasing reserves of crude oil, liquid fuels derived from plant material also called biofuels appear to be an attractive substitute source of energy. Microalgae are single-celled organisms that turn solar energy into various forms of chemical energy such as lipids, proteins and carbohydrates. Algae production is being investigated because of the potential to obtain pharmaceuticals, pigments, carbohydrates, fats and other chemicals, used widely in industry 1.

In addition, algae can be used for wastewater treatment 2 and their ability to produce oxygen from CO2 also contributes to the preservation of the ecological balance.

Microalgae can be produced in photobioreactors (PBR). The most important factor in the design of PBR is the lighting system 3. Most of the energy used in a photobioreactor is for lighting 4. To have widespread commercial use, photobioreactors are required to be cheap, durable, and reliable and have an efficient light source.

In order to cultivate microalgae commercially, a durable, reliable, low cost and high efficiency light source is required. Nowadays, among the variety of light sources, light-emitting diodes (LEDs) are the only ones that can achieve this criteria. LEDs are light and small enough to fit into almost any type of photobioreactor and their advantages such as lower heat generation, longer life-expectancy, higher conversion efficiency and others has made them commercially viable 5. For the growth of the different kinds of algae, different nutrients in the growth medium and different wavelengths may be necessary.

In this study all environmental conditions, except for the wavelength of light and light intensity, were kept constant when growing Chlorella pyrenoidosa in internally illuminated bubble column photobioreactor. In the experiments red, blue, green and white LED lights were used as illumination sources. The results after a period of ten days of growth showed the effect of the four illumination sources relative to cell mass and biochemical composition of algal biomass.

Design of the Photobioreactor:

Fig. 1 illustrates the design and dimensions of the photo bioreactor assembled with two acrylic columns, each with an external diameter of 0.165 m and the inner diameter 0.155 m.  The height of the acrylic column was 0.43 m. The aspect ratio of the present bubble column reactor is 2.77.In general aspect ratio of a bubble column reactor ranges from 2-3. Four glass housings were installed within the column, each housing with 0.02 m diameter and a height of 0.38 m. Algal culture as grown in the inside column to a final volume of 4.5 l provided with an illuminated surface area of 0.1219 m2. Ambient air was filtered (0.2 µm pore size) and bubbled along with pure CO2 through a porous plate sparger located just above the bottom of the inside cylinder. The gas flow rate of CO2 and air was adjusted at 1% and both were mixed in a gas mixing chamber prior to entering the Bioreactor.

To compensate evaporation losses, a constant volume of culture was maintained by replenishing the nutrient rich medium (3 liters).  The pH was monitored continuously using pH probe and controlled manually. Temperature generated due to sparging and metabolic reactions inside the reactor was controlled using the coolant that is pumped outside chamber through a recirculation process. The coolant (water) was supplied from overhead tank into the external column.

FIG 1: EXPERIMENTAL SETUP OF PHOTO BIOREACTOR WITH MIXING CHAMBER [INSIDE THE BOX: TRIANGULAR ARRANGEMENTS OF THE LIGHTS FOR BETTER PENETRATION OF LIGHT ON ALL SIDES INSIDE THE REACTOR].

Estimation of Lipid, Carbohydrate and Protein: The carbohydrate content was analyzed based on the procedure published by earlier scientists6. In short, 0.1 g dried algal pellet was acidified by adding 20 ml 2.5 M HCl. The acidified solution was then hydrolyzed at 100°C for 30 min and neutralized to pH 7. The volume was adjusted to 100 ml. The filtered sample was subjected to 3,5-dinitrosalicylic acid (DNS) assay 7.

Lipid extraction was performed in a way that was similar to the procedures reported by earlier studies 8. Briefly, 1.0 g dried cells were ground in amortar and pestle. The dried powder is then transferred to a 50 ml glass centrifuge tube. Chloroform was then added to the tube to make the chloroform/ methanol (2:1, v/v). The tube was vortexed for 5 min and was allowed to stand for 24 h. After that, the tube was centrifuged at 4,000g for 15 min to remove the algal solids. The supernatant was collected and the solvent was vaporized using Rotovap at 650C. Oil left in the flask without solvent was weighed to calculate lipid content.

Protein estimation is done using Lowry’s method 9. Briefly, 0.1 g algal powder is taken and 2ml of 5%TCA is added. The mixture is centrifuged at 2000rpm for 10min.Solution containing pellet is dissolved in 1.5ml of 0.1N NaOH. From the above prepared solution 0.2 ml is taken into 20ml test tube and 5ml of alkaline copper solution is added. After incubation at room temperature for 15min, 0.5ml of Folin-Ciocalten reagent is added. Again the mixture is incubated for 30min and OD values were taken at 540nm.

The specific growth rate (μ) of C.pyrenoidosa under green, red, blue and white lights was calculated using the formula

The doubling time (td) of C.pyrenoidosa was also calculated for the four different wavelengths of lights using the equation td= 0.693 / µ. 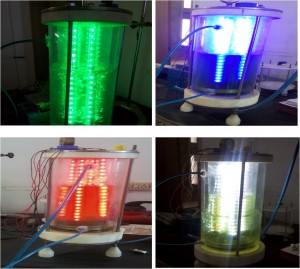 Fig.2 shows the set up of different wavelengths of light in internally illuminate bubble column photobioreactor. The effect of four different LED lights on the growth of Chlorella pyrenoidosa was observed for 10 days. There was a significant difference in the growth of algae when they were grown in four different lights (Fig. 3). The growth of C.pyrenoidosa growth increased till 8th day in all the wavelengths and after that growth became constant as microalgae could have entered the stationary phase either due to unavailability of nutrient medium or substrate inhibition.

In addition to differences in the energy intensity, specific components of light are known to impact the cellular regulatory processes including: chlorophyll synthesis, photo damage repair, and cell division. For example, blue light was shown to be essential for the division of Chlamydomonas reinhardtii cells 11. Evidence for the influence of blue light on short-term growth rate is equivocal 12. Previous studies 13 also reported that the blue LED allows the light intensity to penetration deep into the batch culture thus enhancing the doubling of microalgae and cell density. 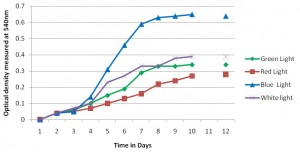 TABLE 2: BIOCHEMICAL ANALYSIS FOR C.PYRENOIDOSA UNDER DIFFERENT WAVELENGTHS OF LIGHT

The biochemical analysis was performed on the dry biomass obtained from photobioreactor after 10 days of cultivation. From Table 2 it was found that the protein and carbohydrate content was high in algal biomass grown under blue light when compared with other wavelengths of light. Lipid productivity is a product of lipid content and dry cell weight of algal biomass, which in turn decides its suitability as alternative source of biodiesel. As the dry cell weight of C.pyrenoidosa in other light intensities was less when compared with blue light, the lipid analysis was performed only for the algal biomass grown in blue light. It was found that the lipid content was 3.38mg/g in that biomass sample.

CONCLUSION: Growth of C.pyrenoidosa was more in the presence of blue light compared to green, red and white lights asblue LED allows the light intensity to penetration deep into the batch culturecompared to the other lights. Specific growth rate of C.pyrenoidosa  under  blue light was found to be maximum (0.506 day-1) and showed a rapid doubling time of 32.64 h. Also the protein and carbohydrate content were found to be more in blue light when compared to other three wavelengths of light.

ACKNOWLEDGEMENTS: We thank the Management of Sreenidhi Institute of Science and Technology (SNIST) and Technical Education Quality Improvement Programme(TEQIP-II) funded by World bank  for their financial support in carrying out this in-house project.