INTRODUCTION: Albendazole is a benzimidazole drug used for the treatment of a variety of parasitic worm infestations. It has low water solubility, limiting its oral absorption and resulting in a lower bioavailability 1. So we prepared the chewable albendazole tablets 2-7. Mainly, the chewable tablets are designed especially for children and such persons who may have difficulty in swallowing the tablets.

These are intended to be chewed in the mouth before swallowing and are not intended to be swallowed intact and facilitate more rapid release and hence more rapid absorption of active ingredients and provide quick onset of action. Hence, we formulated the albendazole chewable tablets to improve the compliance in children and rapid action in the dissolution of the drug. The formulation of the drug product can have a significant effect on the rate of disintegration and dissolution

Methods: We employed three methods for the preparation of granules, and the amounts of all ingredients required for the tablets are shown in Table 1.

Nonaqueous Granulation: All the ingredients were separately weighed and sifted using mesh no. 40. Albendazole, Lactose monohydrate, Starch, and Sodium Starch Glycolate was mixed in a polybag for ten minutes. For the preparation of binder dispersion, isopropyl alcohol was taken in a beaker, stirred with a glass rod to disperse starch until no lumps were observed. Then the above dry mixture was granulated with binder solution and dried in the tray drier at the temperature of 40-50 ºC until the moisture reduces down to NMT-2%.

Aqueous Granulation: All the ingredients were separately weighed and sifted using mesh no. 40. Albendazole, Lactose monohydrate, Starch, and Sodium starch glycolate were mixed in a polybag for ten minutes. For the Preparation of binder dispersion, purified water was taken in a beaker, stirred with a glass rod to disperse starch until no lumps were observed. Then the above dry mixture was granulated with binder solution and dried in the tray drier at the temperature of 40-500 ºC until the moisture reduces down to NMT-2%. The dried granules were passed through mesh no. 30. Then Mannitol (pearlitol200) was passed through mesh no. 30, Sodium saccharine, Carmofine, and pineapple flavor were passed through mesh no. 100. All these were then added to the dried granules and blended for ten minutes. Finally, the above blend was lubricated with Magnesium stearate, Talc, Aerosil for two minutes.

Direct Compression: All the ingredients were separately weighed and sifted using mesh no. 40. Albendazole, Lactose monohydrate, Starch, and Sodium starch glycolate Mannitol (pearlitol200) were passed through mesh no. 30. Sodium saccharine, Carmofine color, and pineapple flavor were passed through 100 mesh, and required quantities were blended for ten minutes in poly bag. Finally, the above blend was lubricated with Magnesium Stearate, Talc, and Aerosil for two minutes.

Finally, the preparation of tablets using the above three methods with the suitable ingredients by weighing of each tablet of 785mg and the powder blend was evaluated for flow properties such as bulk density, tapped density, compressibility index, Hausner’s ratio, angle of repose and results are presented in Table 2.

Bulk Density: 10 An accurately weighed quantity of powder, which was previously passed through sieve # 40 [USP] was carefully poured into the graduated cylinder. Then after pouring the powder into the graduated cylinder, the powder bed was made uniform without disturbing. Then the volume was measured directly from the graduation marks on the cylinder as ml. The volume measured was called as the bulk volume, and the bulk density is calculated by the following formula;

Tapped Density: 10 The same measuring cylinder which was used for the bulk volume was set into tap density apparatus. The tap density apparatus was set to 300 taps drop per min and operated for 500 taps. Volume was noted as (Va) and again tapped for 750 times, and volume was noted as (Vb). If the difference between Va and Vb not greater than 2% then Vb is considered as final tapped volume. The tapped density is calculated by the following formula.

Angle of Repose: 11-12 The angle of repose of powder was determined by the funnel method. The accurately weighed powder was taken in a funnel. The height of funnel (h) was adjusted in such a way that the tip of the funnel just touches the apex of the heap of the powder. The powder was allowed to flow through the funnel freely on to the surface.

Evaluation of Tablets: The mechanical strength of the formulated and prepared tablets of albendazole were evaluated the parameters such as hardness, weight variation, thickness, friability, and disintegration time.

Tablet Hardness: 13 Hardness is the crushing strength of tablet, which determines the ease of handling and rigors of the transportation. For each formulation, 3 tablets were used for the study. The hardness of the tablet was determined and expressed in kg/cm2.

Thickness: 14 The thickness of the tablets was measured using manual Vernier Calliper and expressed in mm.

Friability: 15 It is a measure of the mechanical strength of tablets. The friability of the tablet was determined using Roche Friabilator. It is expressed in percentage (%). 10 tablets were initially weighed (W0) and transferred into the friabilator.

The friabilator was operated at 25 rpm for four mins. The tablets were weighed again (W). The percentage friability was then calculated by

Dissolution: 16 Dissolution of core tablets of albendazole formulation was studied using USP II dissolution rate test apparatus employing paddle stirrer. 900 ml of 0.1N HCL was used as dissolution medium. A 410mg tablet was used for the test. The stirrer was adjusted to rotate at 50 rpm, and a temperature of 37 ± 0.5 ºC was maintained throughout the experiment. 10 ml of samples were withdrawn at various time intervals and analyzed by measuring the absorbance at 309.0 nm. The volume withdrawn at various intervals was immediately replaced with a fresh quantity of dissolution medium. The above results are given in Fig. 1. 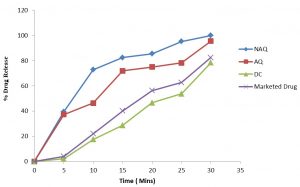 RESULTS AND DISCUSSION: Albendazole chewable tablets are prepared by using the three methods, which are non-aqueous granulation, aqueous granulation, and direct compression. The physical properties of formulated granules show the parameters in their limits, which are Hausner’s ratio are in the range of 1.10 - 1.15, so the value indicates the fair flow.

ACKNOWLEDGEMENT: The Authors are thankful to SSJ College of Pharmacy management for providing all the necessary facilities during this research work.