ABSTRACT: Surgeries like vasectomy, tubectomy, and medication (contraception) for the population control are not fully restraining the population growth.  Medicine available to control birth rate carrying side effects. The attempt of exploring the importance of Ayurveda the present work was carried out. The methanol extract of the plant Elytraria acualis was prepared by maceration technique. Extract affects fertility by reducing the sperm count and motility in the albino rats. The male albino rats were divided into three groups of eight animals in each. The first group was considered as control and Group II, III was treated with dose 200mg/kg and 300mg/kg extracts respectively. The treatment of the extract was carried out by gastric gavage for 21 days through oral. On 22nd day all rats were sacrificed to study sperm count and motility. The blood samples were centrifuged to separate serum. The serum samples used for the serological parameters. The reduced levels of vital reproductive organs weights and sperm count, motility were observed in the treated rats compared to control. The cholesterol, triglycerides increased and glucose levels were decreased in the serum of treated rats. The glycogen and protein levels of testes and liver were decreased in the treated groups than to the control group. The histological sections of testes in treated groups were observed that loss of interstitium and degenerated germinal cells were also observed in the treated groups. The effect of the extract was more in group –III compare to group- II.

INTRODUCTION: Indian Ayurveda explored in treating several ailments by using natural products derived from the medicinal plants. Using synthetic drugs to cure many diseases are adversely effecting immune system of the body. The commercially available contraceptives for both men and women are causing side effects. Since they are harmful the scientific community putting efforts to find out non side-effecting contraceptives. In that attempt researcher of pharmacology trying to find out the medicinal plants which have the contraceptive property for both male and female.

Among the many plants have been screened for antifertility like Sesbania sesbain 1, Trygonella poenumgacum 2, Ballota undulate, 3 Mentha arevensis 4, Ocimum gratissimum, 5, 6, etc. The present approach is to screen the extract of   E. acaulis for antifertility activity in male albino rats.

MATERIALS AND METHODS: Elytraria acaulis plants were brought from the village Gudur, Warangal district. The whole plants were dried under shade. Then the dried parts were powdered. The powder passed through sieve plate no. 20 to collect the fine powder. The powder was used for the preparation of extract. 50 g of powder was mixed in the 250 ml of methanol shaking randomly, then left for 24 h. Then the solution was filtered off to collect filtrate and marc was added to 250 ml of methanol by shaking. After 24 h, the solution was again filtered to get the filtrate. Then both filtrates were mixed and allowed to distillation to get the extract and preserved in refrigerator prior to use.

Male albino rats weighing about 170-230 g were selected for the study. The rats were brought from the Mahaveer Enterprises, Hyderabad. The rats were acclimatized to lab conditions with 25 ± 5 ºC temperature and 35 to 50% humidity, with the approved Institutional Ethical committee (IAEC/03/UCPSc/KU/10). The rats were kept in polypropylene cages and given standard rat pellet (Hypro, Pune) as diet and water ad libitum. The male albino rats were divided into 3 groups. The group –I was controlled, group- II, and group-III were treated. The group –II rats were treated with a dose of 200 mg/kg and group-III rats were treated with 300 mg/kg of methanol extract. The administration of extract was done for 21 days through oral.

Blood samples were collected on 22nd day through retro-orbital puncture. Then the rats were sacrificed and dissected and vital organs were separated. The vital organs were weighed and cauda epididymis was teased finely in 20 ml of normal saline for collection of sperms. 1 ml of the saline was placed on Neubauer chamber and covered with coverslip to count sperms 7. The sperm motility was calculated by

The number of sperms was in millions/ml. The blood samples were centrifuged to separate serum and serum samples were used for serological tests. The serological tests were performed using commercially available kits. Glycogen, proteins were estimated in liver and testis by modified Anthrone and Lowry methods respectively. The testes were processed for the histological studies. The results were assessed by performing one way ANOVA, Dunnet multiple comparison test with significance p<0.05.

TABLE 5: EFFECT OF ELYTRARIA ACUALIS EXTRACTS ON GLYCOGEN AND PROTEIN CONTENT OF TESTIS AND LIVER 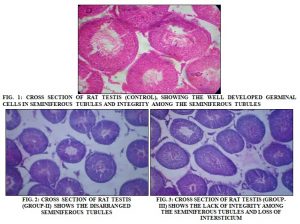 CONCLUSION: The decreased sperm count, motility and vital reproductive organs weights revealing the effect of extracts on fertility. The biochemical parameters like tissue glycogen, protein in liver and testis were decreased whereas serum cholesterol, triglycerides, SGOT, SGPT were increased in the treated groups. The results were explaining the antifertility activity of the plant. Though, the histological sections also supporting the results still there is a need for further studies to confirm the antifertility activity of Elytraria acaulis.