EFFECT OF ETANERCEPT AGAINST MYOCARDIAL ISCHEMIA/REPERFUSION INJURY IN MALE MICE

EFFECT OF ETANERCEPT AGAINST MYOCARDIAL ISCHEMIA/REPERFUSION INJURY IN MALE MICE

INTRODUCTION: The myocardial ischemia is energetic stress, while reperfusion is associated with abrupt ionic shifts and considerable oxidative stress. Cells die by necrotic and apoptotic pathways after the acute injury, the healing myocardium is undergone to biomechanical stress and inflammation, which can cause by a smaller but more sustained wave of cell death, these changes in the metabolic and functional characteristics of surviving cells1.

When ATP levels decrease, cells lose function of the Na+/K+ ATPase and Na+ levels increase. In an effort to neutralize the decreased intracellular pH, cells activate their sodium ion-hydrogen ion exchanger (NHE). The majority of eukaryotic cells to maintain ionic homeostasis and to protect cardiac myocytes from intracellular acidosis using this exchanger. The NHE is an integral plasma membrane protein that electrochemical exchanges extracellular Na+ for intracellular H+ with 1:1 stoichiometry. If the intracellular [Na+] is excessive, osmolar disturbances such as cellular oedema and swelling may occur. The myocyte will correct the osmolality by pumping Na+ outward and moving Ca+2 inward. The osmolar load of the cell with the use of the Na+/Ca+2 exchanger (NCE), which exacerbates the hypercalcemic intracellular state. The Ca+2-ATPase pump will pump excess Ca+2 into the sarcoplasmic reticulum (SR). If the SR overfills with excess Ca+2, a vicious cycle of Ca+2 uptake and  release will result that uses excessive ATP without achieving calcium ion homeostasis 2.

Cardiomyocyte apoptosis is one of the major mechanisms underlying I/R injury. The progressive loss of cardio -myocytes due to apoptosis plays a critical role in cardiac dysfunction after acute myocardial infarction3. B cell lymphoma-2 (BCL-2): The protective role of anti-apoptotic Bcl-2 in the heart is demonstrated by the fact that cardiac-specific over expression of Bcl-2 significantly reduces infarct size after I/R 4. The decreased bcl-2 content facilitates MPT opening in the presence of oxidative stress. The current results indicate that the ischemia induced decrease in bcl-2 content in combination with increased ROS generation from the damaged electron transport chain will trigger MPT opening and increase cardiac injury during early reperfusion 5. In the ischemia/reperfusion injury tissue, the intracellular calcium and ROS level will increased, these factors all contribute to induce apoptosis induce factor (AIF) to release and translocate to the nucleus, in the end, the caspase-independent apoptosis will happen, if we prevent this cell death, the prognosis of ischemia/reperfusion will be favourable 6 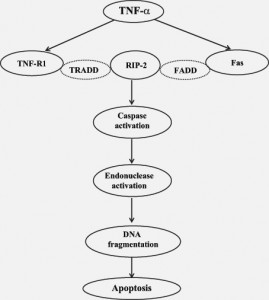 Etanercept is a fully humanized, dimeric, recombinant  protein generated by the fusion of 2 soluble (p75) TNF  receptors with the constant fragment (Fc) of human immunoglobulin G1 (IgG1), which includes the CH2 and CH3 domains of the immunoglobulin. This is the fraction that provides stability to the molecule 7.

A forty adult males Swiss Albino mice weighing 28-35 g were   purchased from Animal Resource Center, the National Center for Drug Control and Researches. The animals were apparently healthy and they were housed in the animal house of College of Medicine/University of Kufa in a temperature-controlled (24 ± 2 °C) room with ambient humidity and alternating 12-h light/12-h dark cycles and were allowed free access to water and standard chow diet until the start of experiments. The mice were left for two weeks without interference for acclimatization. They had no manifestation of any illness upon examination.

In vivo myocardial I/R model was modified from a previous study 8. Briefly, Animals were intraperitoneally anesthetized with 100 mg/kg ketamine and 10 mg/kgxylazine 9. after anaesthesia, shave the neck area and the left side of the rib cage and disinfected by 80% ethanol 10. Place the mouse on its back checked the reflexes by pinching the tail and hind feet to be sure that the mouse has sufficient anesthesia. Under microscopic view, perform a midline cervical incision separating the skin, muscle, and tissue covering the trachea. When the trachea was exposed, the trachea was intubated through oral route with a cannula sized either 22 or 20 G according to the weight of the animal. As the small catheter was reserved for the smaller animal, the tube was visible through the trachea which was already exposed.

The mice were intubated and mechanical ventilation is then achieved by connecting the endotracheal tube to scientific ventilator (Harvard Model) at a respiratory rate of 138 breath/minute with a tidal volume of 20 mL/kg body weightb 11. A left thoracotomy was carried out to expose the heart. Zoom in the microscope on the heart, the LAD is then transiently ligated (or can be tied with a slipknot) using a 6-0  polyprolene suture for a 30 -minute ischemic period 12. The chest wall closed by the enclosing the ribs with figure eight of 5-0 silk suture. The pectoral muscles should be returned back into the original position (first the minor, then the major partly overlying it), then the skin was closed with 5-0 silk suture.

The rate of ventilator was gradually decreased until reach 80 breaths /min. and watched for the spontaneous breathing, and when it was sufficient, and the decision was made for gentle and careful extubation after free the mouse from tapes. Finally, the mouse should be transferred into a clean cage oxygenated with 100% oxygen and placed near the fair heating lamp. Immediately after finishing the reperfusion time the moue was sacrificed, starting by injection of highdose from ketamine and xylazine, after giving good time for the animal to go into deep anesthesia, the mouse is positioned and the chest is opened in flap like manner revealing the heart then a needle of the syringe is introduced into right ventricle to aspirate around 0.5 ml of blood for later plasma analysis. After that hearts were rapidly removed for quantification of myocardial injury and apoptosis and biochemical studies 13.

After the 1st week of acclimatization, the mice were randomized into four groups as follows:

Preparation of samples for caspase 3:

Rinse cardiac tissues two times with PBS, remove any remained PBS after the second rinse. Solubilize tissue in Lysis Buffer #6 and allow samples to sit on ice for 15 minutes. Assay stored at ≤ -70° C. Before use, centrifuge at 2000x g for 5 minutes and transfer the supernate to a clean test tube. Assay was done by diluted the lysates 6-fold with IC Diluent #8 and made further serial dilutions in IC Diluent #3.

Preparation of samples for Bcl-2:

Rinse cardiac tissues two times with PBS, remove any remained PBS after the second rinse. Solubilize tissue in Lysis Buffer #12 and allow samples to sit on ice for 15 minutes. Assay stored at ≤ -70° C. Before use, centrifuged samples at 2000 x g for 5 minutes and transfer   the supernate to a clean test tube. Sample protein concentration may be quantified using a total protein assay; dilution is made by IC Diluent #4

Statistical analyses were performed using SPSS 20.0 for windows.lnc. Data were expressed as mean ± SEM. Analysis of Variance (ANOVA) was used for the multiple comparisons among all groups followed by post-hoc tests using LSD method. The histopathological grading of heart changes is a non-normally distributed variable measured on an ordinal level of measurement; therefore non-parametric tests were used to assess the statistical significance involving this variable. The statistical significance of difference in total score between more than 2 groups was assessed by Kruskal-Wallis test, while Mann-Whitney U test was used for the difference between 2 groups. In all tests, P < 0.05 was considered to be statistically significant.

Etanerceptreduced cardiac caspase 3:At the end of the experiment, the level of myocardial Caspase 3 was significant (p < 0.001) increased in induced untreated (control) group as compared with the sham group. There was an insignificant difference between control vehicle (saline) and control group. The myocardial Caspase 3 of etanercept treated group was significantly (p < 0.001) lower than that in the control group. Etanercept treated group showed a significant (p < 0.001) increase in the level of caspase 3 as compared with the sham group, Fig. 4 and Table 1.

At the end of the experiment, the level of myocardial Bcl-2 was significantly (p < 0.001) reduced in induced untreated (control) group as compared with the sham group. There was an insignificant difference between control vehicle (saline) and control group.  The myocardial Bcl-2 in etanercept treated group was significantly (p < 0.001) higher than that in the control group. Etanercept treated group showed significant (p <0.001) increase in the level of Bcl-2 as compared with the sham group, Fig.5 and Table 2. 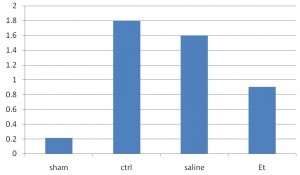 FIG. 4: THE MEAN OF CASPASE 3 (pg/ mg) IN THE FOUR EXPERIMENTAL GROUPS AT THE END OF THE EXPERIMENT.

TABLE 1: MYOCARDIAL CASPASE 3(pg/mg) OF THE FOUR EXPERIMENTAL GROUPS AT THE END OF THE EXPERIMENT (N = 6 IN EACH GROUP

* Vs. sham group, **vs. Control group. The data expressed as mean ±SEM.

FIG.5: THE MEAN OF Bcl-2 (pg/ mg) IN THE FOUR EXPERIMENTAL GROUPS AT THE END OF THE EXPERIMENT.

TABLE 2: MYOCARDIALBCL-2(pg/mg) OF THE FOUR EXPERIMENTAL GROUPS AT THE END OF THE EXPERIMENT (N = 6 IN EACH GROUP

* Vs. sham group, **vs. Control group. The data expressed as mean ±SEM.

TABLE 3: THE DIFFERENCES IN HISTOPATHOLOGICAL SCORING OF ABNORMAL HEART CHANGES AMONG THE FOUR EXPERIMENTAL GROUPS 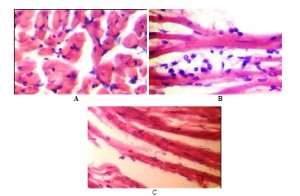 FIG.7: REPRESENTATIVE PHOTOMICROGRAPH OF A SECTION OF THE HEART TISSUE SECTION STAINED WITH HAEMATOXYLIN AND EOSIN (X 40). A, the sham group shows normal architecture (score 0); no interstitial edema, no diffuse myocardial cell swelling and necrosis, no neutrophils infiltration, no hemorrhage, and no evidence of apoptosis. B: Photomicrograph of cardiac section for the control group showed hemorrhage, necrosis and neutrophil infiltration. C: Photomicrograph of cardiac section in etanercept treated group show almost normal cardiac structure,most tissues reveal a mild histological changes.

ACKNOWLEDGMENT: Praise be to our almighty Allah, the Gracious, who gives me the power and motivation to perform and present this work. With deep sense of gratitude, I wish to express my sincere thanks Prof. Dr. Najah R. Al Mousawi for his guidance, valuable advice and support. I am especially grateful & indebted to Assist. Prof. Dr. Fadhil Ghaly Yousif for his great efforts, guidance, valuable advice in this research. I am grateful to the College of Medicine University of Kufa, Postgraduate Studies Department and the Department of Pharmacology and Therapeutics, for offering me the opportunity to continue my higher studies. Also, I would like to express my deep thanks to Dr. Qasswar Al-Terrahei for his kind help in the field of histopathology. My deepest thanks to Dr. Maitham Ghaly Yousif for his help in ELISA technique.