Introduction: Gastric ulcer is a major disease of gastrointestinal system which affects 10% of the world population with different etiologies 1. Gastric ulcers of common pathologies may be induced by a variety of factors, such as stress, smoking and noxious agents, including non-steroidal anti-inflammatory drugs (NSAIDs) (worldwide used for the treatment of pain, rheumatic and cardiovascular diseases) 2. Also NSAIDs are the one of the causing agent used in the gastroprotective activity in experimental animals 3.

Plants produce a vast and diverse assortment of organic compounds or secondary metabolites, the great majority of which do not appear to participate directly in growth and development are often referred to as natural products 4. Phytochemicals rich plants are traditionally used to cure various maladies. Morus alba L. (Family: Moraceae) is dominantly one of them and commonly known as mulberry 5. Generally, it is used as foliage to feed the silkworms (Bombyx mori L.) and ruminants 6, 7. Leaves of the plant contain protein, crude fibres, neutral dietary fibres 8, moran 20K and 1-deoxynojirimycin (DNJ), isoprene-substituted flavanones: kuwanon G and kuwanon C 9, 10. Kuwanon C, mulberrofuran G, albanol B 11, 12, quercetin 3-(6-malonylglucoside), rutin, isoquercitrin, astragalin are the flavonol glycosides present in the Morus alba leaves 13. 1-Deoxynojirimycin (DNJ), a polyhydroxylated piperidine alkaloid present in both leaves and bark, known to be one of the most potent a-glycosidase inhibitors 14, 15. Mulberry (M. alba) leaf extract provides a viable treatment for Alzheimer’s disease through the inhibition of amyloid beta-peptide (1-42) fibril formation and attenuation of amyloid beta-peptide (1-42)-induced neurotoxicity 16. The extract of mulberry leaves exhibited free radical scavenging and antioxidant activities responsible for depigmentation 17, 18.

On the basis of literature review, the aim of the present study was to evaluate the effect of ethanol extract from Morus alba L. (family: Moraceae) leaves supplementation on gastric tissue glutathione level in indomethacin induced ulcers in rats.

The fresh leaves of Morus alba L. were collected in February 2011, from the garden of the institute. The plant materials were taxonomically identified and authenticated by Dr. D. C. Saini, Scientist E at Birbal Sahni Institute of Palaeobotony, Lucknow with reference no. 13597.

Fresh leaves of the plants were cleaned, dried under shade at room temperature and powdered. Dried plant materials were pulverized to fine powder and that was passed through 20 mesh size. The plant material was first defatted with petroleum ether in soxhlet and then extracted with 50% ethanol. Obtained semisolid material was filtered and filtrate was dried in rota evaporator to yield 21.63% w/w. Ethanol extract of M. alba leaves (EMA) was stored in desiccator for further preliminary phytochemical screening and pharmacological evaluation.

Wistar albino rats of either sex were obtained from animal house of the department. They were housed in an environmentally regulated room on a 12 hrs light: 12 hrs dark cycle with 25±2°C and had free access to food and water. The experimental protocol was approved by the Institutional Animal Ethics Committee of Institute and experiments were conducted according to the CPCSEA, India (CPCSEA-837/ac/2004) guidelines on the use and care of experimental animals.

Different doses (5, 50, 300 and 2000mg/kg, p.o.) of EMA to the animals were used for acute toxicity in accordance to Organization for Economic Cooperation Development guideline 423 27. Three female rats, each sequentially dosed at intervals of 48 hrs, were used for the test. Once daily cage side observations included changes in skin, fur, eyes, mucous membrane (nasal), autonomic (salivation, lacrimation, perspiration, piloerection, urinary incontinence and defecation) and central nervous system (drowsiness, gait, tremors and convulsions) changes. Mortality, if any, was determined over a period of 2 weeks.

Selection of doses: For the assessment of activity, two dose level were chosen in such a way that, one dose was approximately one-tenth of the maximum dose during acute toxicity studies, and other dose, which was one-fifth of maximum dose (i.e., 200, 400 mg/kg, p.o.).

Vehicle control, EMA in doses 200 and 400 mg/kg and ranitidine 50 mg/kg were administered orally for 7 days in their respective groups on the eighth day, experiment was performed by the standard method with some modifications as described by Gupta et al 28. Briefly, wistar albino rats were fasted for 18 hrs and deprived of water for 12 hrs. Again, animals in group 1 received 1% w/v CMC solution, groups 2 and 3 were administered with EMA at the doses of 200 and 400 mg/kg, p.o., respectively, 1 hr before the indomethacin administration (20 mg/kg, p.o.). Group 4 was administered with the reference drug ranitidine (50 mg/kg, p.o.). The animals were sacrificed after 1 hr. Each stomach was then opened along the greater curvature, rinsed with normal saline and examined grossly. Ulcer index was determined using the following scoring system: 0=normal mucosa, 0.5=blushing, 1=spot ulcers, 1.5=haemorrhage streaks, 2= 3 mm <ulcers <5 mm and 2.5=ulcers>5 mm 29.

Effect of extract on liver:

All groups of rats treated were utilised to estimate the reduced glutathione (GSH) content in stomach tissues as non-protein sulfhydryls according to the method described by Sedlak et al 30. Glandular segment from each stomach was homogenised in 5ml ice-cold 0.02M EDTA solution

Aliquots (4 ml) of tissue homogenate were mixed with 3.2 ml of distilled water and 0.8 ml of 50% (w/v) trichloroacetic acid in glass tubes and centrifuged at 3000 rpm for 15 min, 2 ml supernatant was mixed with 4ml Tris buffer (0.4 M, pH 8.9) and 5,5ʹ-dithio-bis (2-nitrobenzoic acid) (DTNB; 0.01 M) was added. After shaking the reaction mixture, its absorbance was measured at 412 nm within 5 min of the addition of DTNB against blank with no homogenate.

Gastric wall mucus was determined according to the method of Corne et al 31. The glandular segment from stomach was removed, weighed and incubated in tubes containing 1% Alcian blue solution (0.16M sucrose in 0.05M sodium acetate, pH 5.8) for 2 hrs. The Alcian blue binding extract was centrifuged and the absorbency of supernatant was measured at 498 nm. The quantity of Alcian blue extracted (µg/g of glandular tissue) was then calculated.

The samples of stomach from different groups were preserved in 10% buffered formalin and processed for routine paraffin block preparation. Sections of thickness of about 5µm were cut and stained with haematoxylin and eosin.

The EMA was found to be safe up to 2000 mg/kg with no signs of mortality or change in behavioural pattern. This result suggests that plant extract is not toxic and to be safe.

Effect of extract on liver:

Blood serum levels of Alanine transaminase (ALT) (P<0.01) were increased significantly in rats in alcohol and indomethacin induced ulcer model and that were replenish by EMA in both doses and were statistically significant (P<0.05). Other parameters, AST, ALP, total protein, albumin, bilirubin direct and bilirubin total were in normal range. The data are presented in the Table 2.

TABLE 1: EFFECT OF EMA ON INDOMETHACIN INDUCED ULCERATION IN RATS.

All values are expressed as mean±S.E.M., n=6. Anova followed by dunnet’s test. * P<0.05 when the values in the groups are statistically significant against the control value.

Histopathology study: Histopathological studies (Fig.3A-D) further confirmedthat pre-treatment with the EMA at 400 mg/kg inhibited indomethacin induced ulcer, congestion, oedema, hemorrhage and necrosis in gastricmucosa. In reducing congestion and hemorrhage, the EMA (400 mg/kg, p.o.) efficacy was comparable to that of ranitidine. 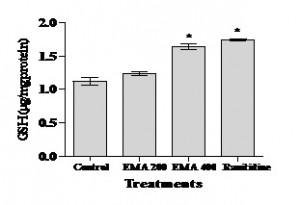 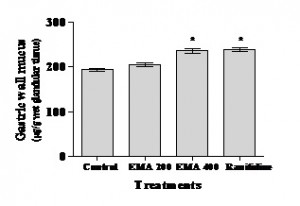 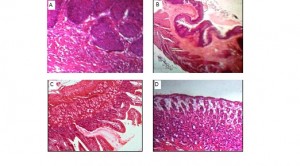 Discussion: The gastric ulcer produced by indomethacin is due to the fact that this compound inhibits the synthesis of cytoprotective prostaglandins, synthesized by COX-1 and COX-2 in the stomach tissue 32. Recently, it has been also shown that ROS possess an important role in the pathogenesis of mucosal damages caused by indomethacin, other agents besides the inhibition of COX enzymes 33. Gastric mucus protects gastric epithelium from acid and proteases present in the luminal side of the stomach 34 and it is considered the first line of mucosal defense because it decreases physical damage to the epithelium by ingested foods. It is an important barrier against self-digestion and acts as an antioxidant, scavenging free radicals in the mucosa 35. Ulcerogenic substances cause disruptions in this barrier and permit contact between the gastric juice and epithelial cells, leading to mucosal damage 36. Thus, the increased stimulation of mucus production by 1.46-fold over the control group is a relevant part of the mechanism of gastric mucosal protection by EMA.

Endogenous NP-SH compounds help preserve the integrity of the mucus wall by uniting its subunits by disulfide bridges, preventing the mucus from fetching soluble, and easily withdrawn by ulcer causing agents 37. NP-SH compounds also prevent the production of free radicals and act as recycling antioxidants 38. The rats that were pretreated with an inhibitor of NP-SH compounds presented ulcer areas similar to those of the vehicle-treated rats, indicating the importance of an intact NP-SH barrier to the maintenance of the EMA gastroprotective effect 39.

Protection offered by the EMA against indomethacin-induced gastric ulceration may be linked to their advantageous medicinal attributes occasioned by secondary metabolites. These include ability to scavenge free radicals and regulate mucosal membrane permeability thereby countering the effect of indomethacin on gastric acid secretion. This is in agreement with the scientific community, where gastroprotective potentials of plant extracts against indomethacin-ulcerated rats were associated with their secondary metabolite 40, 41.

Conclusions: In conclusion, it appears that Morus alba L. possess gastroprotective principles which protect against gastric mucosal damage induced by indomethacin. Probably these effects are due, partly at least, to the presence of flavonoids, glycosides phenolics and tannins in the ethanol extract of the Morus alba leaves. The biochemical parameters also suggest the normal functioning of the liver.

Acknowledgements: The authors wish to thank Prof (Dr.) R M. Dubey, Vice Chancellor, IFTM University, Moradabad for his generous support for the study. This study is a part of PhD from UP Technical University, Lucknow.