ABSTRACT: Cotylophoron cotylophorum, the parasite of ruminants cause a disease called paramphistomosis. Paramphistomosis in domesticated ruminants cause considerable economic loss to the livestock industry in India. In the present study, the anthelmintic activity of Terminalia chebula was assessed based on its effects on the motility and acetylcholinesterase (AChE) of the digenetic trematode C. cotylophorum in vitro. The flukes were exposed to five different sub-lethal concentration of ethanol extract of Terminalia chebula (TcEE) for 2, 4 and 8h. The motility response of the drug-treated parasites was recorded with the aid of Electronic micromotility meter (EMM). Acetylcholinesterase (AChE) activity of the C. cotylophorum was assayed following standard method. The maximum inhibition of motility and AChE activity was observed at 0.5 mg/ml concentration after 8 h of exposure. Inhibition of AChE activity increased with an increase in the drug concentration and the period of exposure.  AChE is an enzyme involved in neurotransmission. The ethanol extract of Terminalia chebula (TcEE) inhibits the AChE and affect the motor activity of the parasites, thus the parasite lose its biochemical hold fast and get expelled from the host.

INTRODUCTION: Cotylophoron cotylophorum is a gastrointestinal digenetic trematode, lives in the rumen of livestock. It has a complex life cycle which requires an intermediate host, planorbid snail. It parasitizes a wide range of hosts. Heavy infection of C. cotylophorum causes paramphistomosis in cattle, sheep and goats. Paramphistomosis has been a neglected trematode infectious disease; recently, it emerged as an important cause of productivity loss 1, 2. Clinical symptoms include decreased appetite, listlessness, weight-loss, fluid foul-smelling diarrhea, dehydration resulting in death of the host 3. Anthelmintic drugs are used to treat the parasites of intestinal tract.

The continuous use of synthetic anthelmintics very often do not control the parasites to the desired extent. This condition has been identified due to emergence of drug resistant population of worms affecting the animals 4. Anthelmintics from the natural sources may play a key role in the treatment of parasitic infections, which have suggested to the proposal of screening medicinal plants for their anthelmintic activity 5, 6.

Medicinal plants are the major source of many primary and secondary metabolities. These biodynamic compounds are of therapeutic value. A number of medicinal plants are used to combat parasitism, and in many parts of the world are still using to treat parasitic infections in man and animals. Plant-derived anthelmintics, especially, the phytochemicals have gained considerable importance due to their potential health benefits 7. Many biochemical constituents of plants have been shown to possess excellent biological activities 8. Plant extracts with high concentration of secondary metabolites such as saponins, tannins, flavanoids have been found to kill or eliminate gastro-intestinal parasites.

The fruits of Terminalia chebula are astringent and used as laxative, cardiac tones, dentrifiers for strengthening of gums. It is used to treat various conditions like jaundice, colic, asthma, hoarse voice, hiccup, vomiting, diarrhea, and abdominal distention. It is also used for treating parasitic infection. The compounds present in T. chebula were found to be responsible for many pharmacological activities such as anti-bacterial, anti-microbial, anti-fungal, anti-viral, anti-oxidant, anti-ulcer, anti-helmintic, etc., 9, 10, 11.

The most common effects of any anthelmintic drug given for parasitic infection is paralysis of parasite musculature, either by the inhibition of neuromuscular transmission or enzyme involved in energy production. All broad spectrum anthelmintic regardless of their mode of action drastically reduced parasite acetylcholinesterase (AChE), thus making it as a potential target 12. The present study was undertaken to evaluate the anthelmintic efficacy of T. chebula based on its effect on the motility and AChE of C. cotylophorum.

Preparation of solvent extracts of T. chebula: The dry fruits of T. chebula (Fig.1) were collected and various solvent extract were prepared following the method of Harbone 14. The dry fruits of T. chebula were coarsely powdered and soaked in hexane, followed by chloroform, ethyl acetate and ethanol successively. Extracts were filtered using Whatman filter paper No.1. and concentrated by distillation using, rotary evaporator (evator). The concentrated extracts were completely dried to remove the last traces of the solvents using Lyodel Freeze Dryer (Delvac). 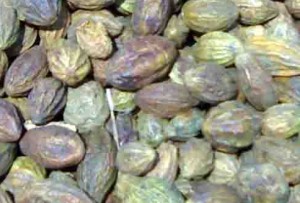 Qualitative measure of motility and viability of drug-treated flukes:

The flukes were maintained in vitro in various concentration of effective solvent extract of T. chebula for 2, 4 and 8 h. The motility response of the drug-treated parasites was recorded with the aid of Electronic Micromotility Meter (EMM) 15. EMM is sensitive and has been designed to provide the accurate quantitative measure of motor activity of the parasites. Movement of the parasites causes a deviation in the path of light rays, and consequently a variation in the electrical signal was detected by a photodetector located at the level of light path. The average deviation of the signal was then amplified and processed using a microprocessor. A temperature controller system is also connected to the EMM. Desired temperature can be set and maintained to record the motility of the parasites. The percentage inhibition in the motor activity of the parasite was calculated using the formula

C – Deviation of voltage signal in the control fluke

T - Deviation of the voltage signal in drug-treated fluke.

AChE was assessed following the method of Elman et al 16. The protein content of the sample was estimated following the procedure discussed by Lowry et al 17. The enzyme activity was expressed as n moles of acetylcholineiodide hydrolysed/min/mg protein. Percentage inhibition in the AChE activity was calculated.

The data obtained were analyzed statistically. Statistical analyses were performed with the Statistical program for the social sciences SPSS version 16.0. The significance of drug induced inhibition in the motility and AChE activity of the parsites was assessed using analysis of variance (ANOVA) for different concentrations of T. chebula.

Qualitative measure of motility and viability of drug-treated flukes:

Ethanol extract of T. chebula (TcEE) was very effective against C. cotylophorum causing 100% mortality after 4 h exposure at 5 mg ml-1 concentration (Table 1). Based on this visual observation, five different sub-lethal concentrations (0.1, 0.2, 0.3, 0.4 and 0.5 mg ml-1) of TcEE were selected for the further quantitative measure of the motor activity of the parasites by EMM and for AChE assay.

Effect of TcEE on AChE activity:

TABLE 1: CHRONOLOGICAL OBSERVATIONS ON THE VIABILITY AND MOTILITY OF C. COTYLOPHORUM EXPOSED TO VARIOUS EXTRACTS OF T. CHEBULA

TABLE 3:    IN VITRO EFFECT OF TCEE ON ACETYLCHOLINESTERASE OF C. COTYLOPHORUM

DISCUSSION: The present study revealed the anthelmintic activity of T. chebula against   C. cotylophorum. The quantitative measurement of motility of drug-treated flukes clearly indicates the direct impact of the drugs on the motility of the parasites.  Inhibition in the motility of Fasciola gigantica and Fasciola hepatica exposed to flukicidal drugs has been reported by several investigators 18, 19. Motility studies directly correlate with the neuromuscular physiology of the trematodes 20. AChE is an important enzyme of neuromuscular transmission found in a number of helminths 21. AChE has been demonstrated to be present in the secretions of a number of both adult and larval parasites, regulating the motor activity of the helminth parasites 22. A number of functions have been proposed to AChE, including a

‘biological holdfast’, inhibition of mucus secretion and regulation of the immune response 23, 24. AChE acts upon the host intestinal wall as a local anesthetic, preventing peristalsis and parasitic expulsion 25. The principal physiological role of AChE is believed to be the termination of transmission at cholinergic synapses by rapid hydrolysis of the neurotransmitter acetylcholine 26, 27, 28. Any major disturbance in neuromuscular coordination is likely to cause the fluke to become detached, and this may ultimately lead to its elimination from the host.

In the present investigation, TcEE induced flaccid paralysis of the flukes and inhibited the AChE activity of C. cotylophorum. The inhibition of AChE activity was dose and time dependent. Similarly, Veerakumari reported the dose and time dependent decrease in the AChE activity of C. cotylophorum treated with praziquantel, levamisole and benzimidazoles in 1996 13. The inhibitory effect of oxyclozanide on the neuromuscular system of Fasciola gigantica was also reported by Kumar and Tripathi 29. Similar inhibitory effect of A. sativum, P. granatum and S. aromaticum on the motility and AChE activity of C. cotylophorum are on recorded 30, 31. Inhibition of acetylcholinesterase secretion has proved to be a good parameter for the interpretation of in vitro anthelmintic activity. The inhibition of AChE leads to the accumulation of ACh of parasite resulting in flaccid paralysis and expulsion of the worms by intestinal peristalsis from the host. The present study elucidates the anthelmintic potential of TcEE and it could be added in the armoury of anthelmintic herbal medicine to combat C. cotylophorum infection in livestock.