ABSTRACT: Subcutaneous implantation of the drug is known to be the first medical approach aiming to achieve prolonged and continuous administration of drugs. The purpose of the research was to achieve sustained delivery of Tramadol Hydrochloride from biodegradable Gelatin-Sodium Alginate polymeric implant. Implants were prepared by using Gelatin-Sodium Alginate polymer in two ratios 70:30 & 80:20% w/w by heating and congealing method and then exposed to formaldehyde vapor for different periods (3, 6, 12 & 24 h) for hardening. Implants formulated with 80:20 Gelatin-Sodium Alginate ratio and hardened for 12 h were chosen for further studies based on drug loading and release performance. Effects of different excipients were studied on drug loading efficiency and drug release profile. Morphology of implant matrices, as studied by SEM, supported the experimental results. The release kinetics of drug was evaluated by fitting the data in four different kinetic models, namely, Zero order, First order, Higuchi and Korsmeyer‐Peppas. Implants were found to follow Korsmeyer Peppas Model the best in most cases. Good correlations were obtained with the Higuchi model as well. According to these models, the drug release mechanism was diffusion controlled.

INTRODUCTION: When considering new options for drug delivery, the most direct approach is usually parenteral administration as innovative pharmaceutical treatments require innovative methods of administration. The development of sustained-release dosage forms is more likely to succeed commercially such as implants providing controlled, local release of active substances are of interest in different medical applications, assuming that they provide the desired efficacy and safety.

The plethora of drug therapies and types demand different formulations, fabrications conditions, and release kinetics. No single polymer can satisfy all the requirements. Therefore there have been tremendous advances in the area of biodegradable polymers over the last 30 years 1.

Present investigation explores the scope to formulate and evaluate sustaining the release of drug by using Gelatin-Sodium Alginate combination biodegradable implants. Tramadol Hydrochloride was chosen as a model drug because it is centrally acting analgesic with a low affinity for opioid receptors and is used treat many long term conditions like rheumatoid arthritis, restless legs syndrome, motor neuron disease, fibromyalgia 2.

Its limiting side effects in the treatment of acute and chronic pain are reported to be less intense and less frequent than other opioids. The drug has a good bioavailability and elimination half-life (5–6 h). It is prescribed 3–4 times a day and therefore is a good candidate to be formulated in sustained release dosage form 3. The goal in designing sustained delivery systems is to reduce the frequency of dosing or to increase the effectiveness of the drug by localization at the site of action, reducing the dose required or providing uniform drug delivery 4.

Preparation of Implant: Tramadol Hydrochloride implants were prepared by using biodegradable polymers Gelatin and Sodium Alginate in two different ratios 70:30 and 80:20, respectively. Implants with 10% drug load for each formulation were prepared using heating and congealing method. Gelatin was weighed & sprinkled with water for 30 min. Then Sodium Alginate was added to hydrated gelatin at 60 °C with continuous stirring until gelatin was dissolved and then glycerin (plasticizing agent) was added into it.

Tramadol Hydrochloride was dissolved with acetone and added to the previous mixture. After homogenous mixing of all ingredients, the solution was poured in a glass Petri dish and kept in an ice bath for 1 hr. Then it was allowed to set by placing in the refrigerator for 3 days and hardened with Formaldehyde 5, 6, 7. After that, the implants were dried at room temperature for 3 days and cut into thin films.

Hardening of Implants: In an empty glass desiccator, a Petri dish containing 37% v/v formaldehyde solution was placed below the perforated plate. Petri dishes containing the implants were kept on top of a perforated plate, and the desiccator was closed immediately. Then implants were removed from the desiccator after 3, 6, 12, and 24-hour intervals, respectively, which allowed the implants to react with formaldehyde vapor for the said hours. After that, they were dried at room temperature for 3 days to make sure that the residual formaldehyde gets evaporated 5, 6, 7, 8.

Digital Photographic Imaging: Photograph of the drug-loaded implants was taken with the help of digital camera Canon Ixus, 10.0 Mega Pixel. Fig. 1(B) shows some randomly selected digital images of the implants. 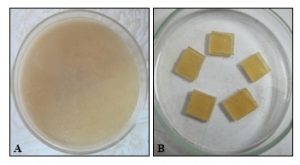 FIG. 1: IMAGES OF GELATIN- SODIUM ALGINATE IMPLANTS (A) AFTER POURING INTO PETRI DISH (B) AFTER CUTTING

FIG. 2: SEM MICROGRAPH OF TRAMADOL HYDROCHLORIDE IMPLANT WITH Mg STEARATE (A) BEFORE DRUG RELEASE (B) AFTER DRUG RELEASE

Determination of Drug Content (Loading Dose): The amount of drug that was loaded in implants during the fabrication process was determined by spectrophotometric analysis. First, the implants were weighed and then crushed Fig. 5 in a mortar and pestle. Then it was dissolved in 1 ml hot buffer by vigorous ultrasonication. For precipitating the polymer and extracting the drug, 9 ml of phosphate buffer (pH 7.4) was added. Then it was centrifuged at 3000 rpm for 15 min to separate the solid material. The supernatant from the solution was collected, and it was analyzed at 271 nm with UV spectrophotometer with phosphate buffer (pH 7.4) as blank. 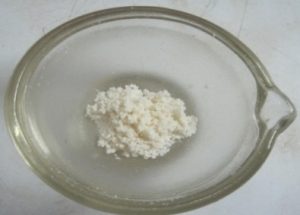 In-vitro Drug Release Studies: For in-vitro dissolution of Tramadol Hydrochloride implants at least 3 samples were taken from each formulation and transferred to 50 & 100 ml rubber capped glass vial containing Phosphate Buffer (pH 7.4) in order to observe the drug release profile Fig. 6. Then they were kept in static condition for certain time period and after predetermined time intervals with mild stirring of the dissolution vessel 10 ml of sample was withdrawn using conventional disposable syringe (10 ml). To replace the withdrawn sample, 10 ml of fresh phosphate buffer was added to the vessels. The withdrawn samples were analyzed for determining the percentage release of drugs by UV spectrophotometer at 271 nm (λmax of Tramadol Hydrochloride). All data were used in statistical analysis for the determination of mean, standard deviation and release kinetics 13, 14.

The Drug Loading Efficiency of Implants: The loading dose has a significant effect on resulting release kinetics along with drug solubility. In case of freely water-soluble drugs, the porosity of matrix upon drug depletion increases with increasing initial drug loading. This effect leads to increased absolute drug transfer rate. The loading efficiency of the implant is dependent on several factors related to the drug, polymer, and solvent properties. Implants were analyzed for actual Tramadol Hydrochloride content against theoretical drug content. The percentage of loading efficiency (%LE) of implants was determined with the formula: 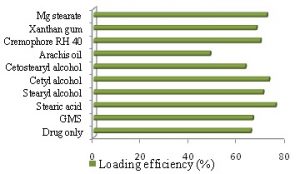 In-vitro Drug Release Studies for 70:30 and 80:20 Ratio: The profile and kinetics of drug release are important because they correlate the in-vitro, in-vivo drug responses by comparing results of pharmacokinetics and dissolution profile patterns 17, 18, 19. The drug release mechanism from the matrix is a consequence of concomitant processes such as diffusion of the active ingredient through the polymer matrix along a concentration gradient, erosion of biodegradable polymers by hydrolysis or combination of drug diffusion and polymer degradation 16. The formulation containing Gelatin-Sodium Alginate in the ratio 80:20 and hardened for 12 h showed maximum sustained action of drug release Table 2 and Fig. 8.

TABLE 2: TIME TAKEN FOR DRUG TO BE RELEASED FROM IMPLANTS 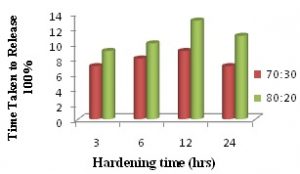 Drug Release Profile from 80:20 Gelatin-Sodium Alginate Polymer Ratio with 12 h Exposure Time: Effect of Excipients: Excipients have various effects on drug release profile. The rate and extent of drug release can be controlled by the use of excipients in the formulation. These agents can act as rate modifier by increasing or retarding the rate of release depending upon the nature of the agent. They probably extend their effects by influencing the way of formulation formed and therefore on the release characteristics of the sustained release implants. Result of in-vitro release are summarized in Table 3 and also graphically represented in Fig. 9 as compared to the drug only implant. 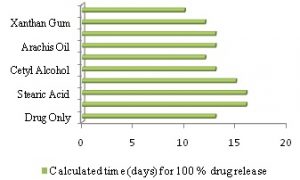 The in-vitro release data of Tramadol Hydrochloride were analyzed using Higuchi, Korsmeyer Peppas, First order, and Zero order model to identify drug release characteristics for implants 20, 21, 22. R2 values in Table 4 show the Korsmeyer-Peppas model to be the best fit. Good correlations were also obtained with the Higuchi model. The Korsmeyer-Peppas equation describes the mode of release of drugs from swellable matrices and Higuchi describes the release of drugs from the insoluble matrix as a square root of time-dependent process based on the Fickian diffusion 23. According to these models, Tramadol Hydrochloride release from implants is diffusion controlled where the drug is leaving the matrix through pores and channels formed by the entry of dissolution medium. 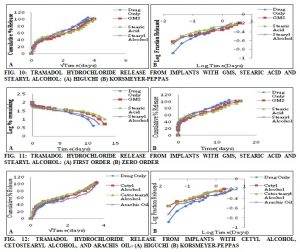 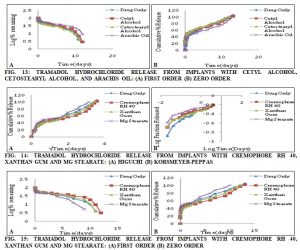 CONCLUSION: Polymeric drug delivery systems are attractive alternatives to control the release of drug to obtain defined blood levels over a specified time. The patients suffering from some disease conditions often benefit from such long-term drug delivery systems 24. This interest has been fostered by the potential advantages provided by these technologies, including a decrease of overall drug dose and possible reduction of local or systemic side effects. Biodegradable polymers are highly desirable in these situations because they degrade in the body to biologically inert and compatible molecules, and no surgical retrieval is required.

As a result, biodegradable polymers offer a novel approach for sustained release drug delivery systems that are simple and convenient to the patient 1. Tramadol Hydrochloride release from Gelatin–Sodium Alginate implants sustained up to 16 days through the drug is highly water soluble. The polymer content had a significant influence on drug loading efficiency. Variation in polymer ratio and inclusion of different excipients affected the drug release characteristics. Since this delivery system has been found to provide sustained drug release, it can be an attractive candidate for further development.

ACKNOWLEDGEMENT: The authors are thankful to Beximco Pharmaceuticals Ltd., Bangladesh, for providing support with the active ingredient.