ABSTRACT: Preliminary screening study had employed to extract inhibitors of calcium oxalate (CaOx) crystallization in-vitro from four plant species, namely Saraca asoca, Berginia ciliata, Boerhavia diffusa, and Crateva nurvala These plants were selected based on their frequent medicinal usage by folks. Plant material (150 g) used for this study was successively extracted with Soxhlet apparatus using the solvents in order of increasing polarity (ethyl acetate, acetone, ethanol and water). Each time the marc was dried and later extracted with other solvents. All the extracts were concentrated by distilling the solvent in a rotary vacuum evaporator. An extracts were prepared at different concentration (1 mg-10 mg/ml). Nucleation assay and aggregation assay of calcium oxalate crystals were measured using spectrophotometric methods. The plant extracts promoted the precipitation of calcium oxalate particles in buffer and inhibited calcium oxalate crystal aggregation which clearly indicates the antilithiatic activity of these plants. Phytocompounds present in this plant may be responsible for the anticrystallization activity. Statistical difference and percentage inhibitions were calculated and assessed. The results were compared with a marked polyherbal combination,cystone, under identical concentrations. Among all the plant extracts, the extract of B. ciliata was significantly more effective in inhibiting the nucleation and aggregation of COM crystals in a dose-dependent manner.

INTRODUCTION: Urolithiasis is the third most frequent problem affecting the urinary tract 1. Urolithiasis affects 10-12% of the world population especially in industrialized countries. It has a recurrence rate of 50% 2. Urolithiasis, which is referred to as the process of formation of calculi (singular calculus) in the urinary system, includes nephrolithiasis (Renal Calculi or Kidney Stones), ureterolithiasis (Ureter Calculi) and cystolithiasis (Bladder Calculi).

Urolithiasis is a complex process that results from several physicochemical events, including crystal nucleation, aggregation, and growth of insoluble particles in the kidney 3. The treatment modalities like Extracorporeal shockwave Lithotripsy (ESWL) and chemotherapy are observed in the management of kidney stones in which ESWL get side-lined due to high recurrence rate as well as it is not affordable to common people.

The chemotherapeutic agent also does not have an effective drug till date. Plants are a rich source of many natural products. In India, plants have been used for a long time in traditional medicine like Ayurveda, Unani, and Siddha. The medicinal value of the herbal drug is due to the presence of certain chemical substances in these plants. These natural compounds physiologically affect the human body, interact with the disease-causing compound or pathogens, their growth and function at different stages of development, and make the body disease-free 4. In the last decade, there has been considerable interest in resurrecting medicinal plants in western medicine and integrating their use into modern medical systems. The reasons include low cost, nutritional value, drug resistance, less side effects, easy availability, and economic value.

Collection of Plant Material, Preparation of Extracts and Phytochemical Screening: S. asoca (bark), B. ciliata (rhizome), B. diffusa (root) and C. nurvala (bark) were procured from Yogesh pharma Pvt. Ltd., Nanded (MS), India. It was identified and authenticated at the Department of Botany, Babasaheb Ambedkar Marathwada University Aurangabad, India. The plant parts were washed thoroughly with water to remove dust and dried under the shade. The dried parts were ground using a blender to obtain the coarse powder and kept in an air-tight container till further use.

Powdered plant material (150 g) was successively extracted with Soxhlet apparatus using the solvents in order of increasing polarity (ethyl acetate, acetone, ethanol, and water). Each time the marc was dried and later extracted with other solvents. All the extracts were concentrated by distilling the solvent in a rotary vacuum evaporator.

In-vitro Calcium Oxalate Assay: Desired amounts of extract were weighed and dissolved in the required quantity of distilled water to get final concentrations of 1, 2, 5, 7. 5 and 10 mg/ml. Then the extract was centrifuged, the supernatant was transferred into a fresh sterile tube and stored at 4 ºC until use. Cystone was used as a standard drug for comparative study.

Nucleation Assay: The nucleation inhibition in presence and absence of extracts were determined by the reported method of Atmani and Khan 5.3 mM/L and 0.5 mM/L of calcium chloride and sodium oxalate solutions were prepared in a buffer containing tris 0.5 mM/L and NaCl 0.15 mM/L of pH 6.5. Both the solutions were filtered thrice. For the assay, 950 µL of calcium chloride and varying concentration of plant extract (100 µL) was pipette out against a blank (without extract).

Crystallization was initiated by adding 950 µL of sodium oxalate solution at 37 °C. The optimal density was monitored at 620 nm after 30 min of reaction using UV-visible spectrophotometer 1800. The induction time in the presence of the extract was compared with that of control in order to calculate the rate of nucleation. The results were expressed in percentage.

Aggregation Assay: The crystal aggregation inhibition in the presence and absence of extracts were determined by the method of Hess 6. CaOx monohydrate (COM) crystals were prepared by mixing calcium chloride and sodium oxalate at 50 mM/L. Both the solutions were equilibrated at 60 °C for 1h and cooled to 37 °C overnight. The crystals were harvested by centrifugation and then evaporated at 37 °C. COM crystals were used at a final concentration of 0.8 mg/ml buffered in tris 0.5 mM/L and NaCl 0.15 mM/L of pH 6.5. Experiments were conducted at 37 °C in the presence or absence of plant extract after arresting the stirring. The rate of aggregation was estimated by comparing the slope of turbidity in the presence of the extract with that obtained in control.

Data Analysis: The results are expressed as mean ± SD. Student’s t-test and one-way ANOVA were applicable and used to analyze level of statistical significance between groups. P<0.05 were consi-dered statistically significant. Linear regression analysis was used to calculate the IC50 values.

RESULTS AND DISCUSSION: The extracts of S. asoca, B. diffusa, C. nurvala and B. ciliata at various concentrations had a significant inhibitory effect on nucleation and aggregation compared with the cystone. In nucleation assay, the number of crystals formed was estimated as the turbidity of the solution. There was a steep decrease in the absorbance with increasing concentration of the extract Fig. 1. All four extracts showed a dose-dependent inhibition of nucleation comparable to standard drug cystone. The IC50 value (mg/ml) of the plant extracts were found in the order of S. asoca >C. nurvala>B. diffusa >B. ciliata Table 1. It was interesting to note that inhibition of nucleation of B. ciliata extract was greater than cystone. Aggregation is the most effective mechanism to increase the size of the particle and to constitute the structure of urinary stones.

The percentage inhibition and IC50 value of all extracts against CaOx crystal aggregation rep-resented in Fig. 2; Table 2. When compared with standard drug cystone, all extracts showed better activity against CaOx crystal aggregation. However, B. ciliata ethanolic extract showed good inhibitory activity on crystal aggregation but was less potent than the cystone at the same concentration range. The R2 was > 0.9 (P< 0.01) for all plots. The results are encouraging, and from the obtained data, it can be postulated that ethanolic, aqueous, ethyl acetate, and acetone extracts contain phytochemicals that might inhibit the growth of COM crystals. COD crystals are less tightly bound to the epithelial cell surfaces than COM crystals and therefore cause less tubular injury 7. Similar inhibition of COM stones was also reported for Tamarindus indica pulp 8 and Herniaria hirsute 5. All these extracts have several polyphenolic constituents, e.g., alkaloids, flavonoids, saponins, terpenoids and tannins, saponins. The rhizomes of B. ciliata contain more polyphenolic compounds like gallic acid and bergenin 9. B. ciliata, B. diffusa, S. asoca and C. nurvala which are selected in this study are commonly used by local healers to expel stones. Its common use assures its importance for the treatment of urolithiasis. In other studies, indigenous plants reported antiurolithiac activity. Here few data mentioned in comparison with our experimental results. Saponins are reported to have anti-crystallisation properties. The inhibitory activity of saponin fraction against urolithiasis was already reported in Solanum xanthocarpum 10 Herniaria hirsute 5. Ramet al studied and demonstrated Terminalia species have the ability to prevent urinary stone formation so, that small particles do not form into large particles and they are excreted from the kidney and reduce the chance of their retention in the urinary tract 11. Pauzi et al concluded that E. hirta (hexane extract) had the best inhibition result with no significant difference (p<0.05) with standard drug cystone among all type of solvents 12. Karunasree V et al reported the chloroform extracts of Semecarpusana cardium, Terminalia chebula and Tinospora cordifolia possess the antiurolithiatic activity maybe because of the non-polar active principles residing in these plants 13. Yadav et al. exhibited Bryophyllum pinnatum leaf extracts shows the preventive effect on ethylene glycol-induced formation of renal calculi through dissolution of preformed stones and prevention of the formation of CaOx crystals 14. 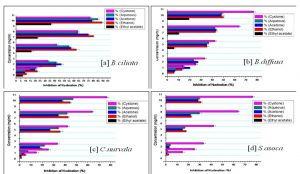 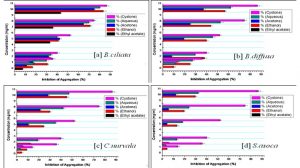 CONCLUSION: In conclusion, the plant extract of Saraca asoca, Bergenia ciliata, Crataeva nurvala, and Boerhavia diffusa can inhibit the nucleation and aggregation of CaOx crystallisation in-vitro. However, the mechanism of action of the extract in animal models of lithiasis needs to be investigated. As the observed activity of the plant extract might be due to other phytochemicals present in it.

ACKNOWLEDGEMENT: Authors are thankful to the Director of the school of life sciences, Swami Ramanand Teerth Marathwada University, Nanded, for providing the instrumentation facilities.

CONFLICTS OF INTEREST: No conflicts of interest relevant to this article were reported.