ABSTRACT: Background:  Inflammatory bowel disease (IBD) is an immune-mediated chronic intestinal condition. Conventional treatment regimens utilizing corticosteroids, anti-inflammatory and other immunosuppressive therapies have major limitations owing to their associated side effects and compliance issues. Objectives:  To evaluate the effect of ethanolic extract of Ficus hispida Linn. in inflammatory bowel disease (IBD) in suitable experimental animal models (albino rats) in comparison with standard drug. Methods: Healthy albino rats were divided into 6 groups (control, standard & Test I, II & III) of 6 animals each. Colitis was induced by intra-colonic administration of acetic acid under anaesthesia. Then the animals were fed with gum acacia (control), standard drug (sulfasalazine) and test drug (FH) according to their groups. At the end of 14 days, blood sample was collected for serum LDH estimation. The animals were then sacrificed, colon excised and assessed for disease activity index (DAI), colon mucosal damage index (CMDI). Plant extract was also subjected to NO scavenging activity analysis. Results:  The results were analysed by one way ANOVA followed by Dunnett's t test. The ethanolic extract of FH produced a significant improvement in both morphological and histopathological score compared to standard drug sulfasalazine. There was also a dose dependent reduction in serum LDH level in the test group. FH also showed NO scavenging activity. Conclusion:  FH is effective in the treatment of IBD. It is due to its anti-inflammatory and free radical scavenging activity

The available treatment choices have major limits owing to the associated adverse effects and compliance issues.1 As a result, there is high prevalence of complementary and alternative medicines for treating the mentioned disease.

Ficus hispida (FH) Linn. belongs to the family Moraceae is a shrub, grows up to 5 meters in height.3 Traditionally, different parts of the plant have been used in the treatment of ulcers, psoriasis, anemia, piles, jaundice, vitiligo, haemorrhage, diabetes, convulsion, hepatitis, dysentery, biliousness and as lactagogue and purgative.4 Since ages, extracts of leaves, bark and root have been used by the tribals of Assam and Manipur in the treatment of jaundice 5 and diabetes.6 Mandal SC et al suggested that the plant has anti-diarrhoeal activity and validates its use in folk medicine for gastrointestinal diseases. 7

The study was conducted in the Department of Pharmacology, Regional Institute of Medical Sciences (RIMS) Hospital, Imphal for a period of 2 years (October 2011-August 2013). Fresh aerial parts of the plant Ficus hispida Linn. were collected from Lamphel area in the month of  october 2011. The plant was identified and authenticated by Prof. P. Kumar Singh, Dept. of Life Sciences, Manipur University. A sample of the plant was deposited at the department herbarium and allocated MUH number 003616. The extraction was done according to the method described by Sivaraman et al using Soxehelet apparatus.8

Acute oral toxicity was studied with oral administration of extract, using the Organisation for economic co-operation and development (OECD) 2006 guidelines.9 As per the limit test, female Wistar albino rats were fasted overnight and given 2000 mg/kg of Ficus hispida extract orally, the next day. Animals were observed for 48 hours, with special attention during the first 4 hours, and daily thereafter for a period of 14 days, for any signs of toxicity or mortality. No toxicity was observed at a dose of 2000 mg/kg. The study was approved by the Institutional Animal Ethics Committee (IAEC) 1596/GO/a/12/CPCSEA  according to the regulation of Committee for the Purpose of Control and Supervision of Experiments on Animals (CPCSEA). Throughout the experiments, animals were handled according to the suggested ethical guideline for the care of laboratory animals.

The animals were divided into 6 groups (control, standard & test I, II & III) of 6 animals each and were treated with respective drugs as shown in the table I. Control group included positive control and negative control.

After overnight fasting and under light ether anesthesia colitis was induced by intra-colonic administration of 1 ml of 4% acetic acid according to the method described by Millar et al to the animals in all the group except negative control. 10 The negative control group was given 0.9% normal saline instead of acetic acid.  The animals were treated with respective drugs in each group for 14 days along with normal diet. On the 15th day animals were sacrificed by high ether anaesthesia and dissected open to remove the distal colon and assessed for colon mucosal damage index (CMDI) morphologically and disease activity index (DAI) by histopathology.

Macroscopic scoring was done and evaluated according to the formula of CMDI described by Morris et al ranging from 0-5 (Table 2).11 The histological scoring (Table 3) was performed as a combined score of inflammatory cell infiltration (score 0-3) and tissue damage (score0-3). The combined histological score ranges from 0 (no changes) to 6 (extensive cell infiltration and tissue damage).12

Under light ether anesthesia about 0.5-1 ml of blood was drawn from orbital sinus using capillary tube and centrifuged at speed of 5000 rpm for 10 min and the serum was used for LDH estimation. Serum LDH was assayed according to the method described by King using colorimeter.13

Nitric oxide scavenging assay was performed using Griess reagent method using colorimeter and absorbance was measured at 546 nm.14 The % inhibition of OD was calculated by using the formula:

The animal carcasses were buried deep in the ground covered with lime and disinfectants after the experiment.15]

TABLE 1: SHOWING THE VARIOUS GROUPS AND THE DRUGS THEY WERE TREATED WITH.

Histopathological scoring was done on the colonic tissue according to the method described by Siegmund et al and was given a score from 0-6 based on cell infiltration and tissue damage. There was no microscopic change (Fig.2) in the normal saline group. Acetic acid group showed a score of 5.50±0.54 (Table 5).

Values are mean±SD, n=6 in each group, *p<0.01, **p<0.001 when compared to control.TABLE 5:  EFFECT OF FICUS HISPIDA L. ON HISTOPATHOLOGICAL SCORE IN COLON IN ACETIC ACID INDUCED COLITIS IN RATS.

TABLE 7: EFFECT OF FICUS HISPIDA L. ON NO SCAVENGING ACTIVITY.

Values expressed as absorbance are the mean ± SEM, n= 3, Significance 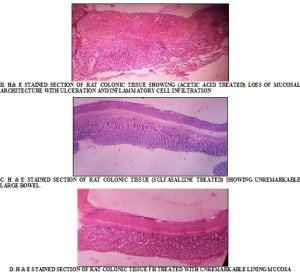 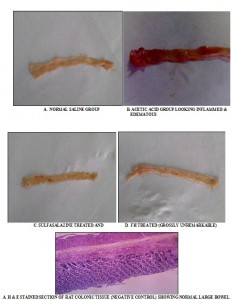 DISCUSSION: IBD could be considered as an imbalance between pro-inflammatory and anti-inflammatory mediators. Monocytes/macrophages, polymorphonuclear leucocytes (PMNs) and endothelial cells are mainly involved in inflammatory response and their activation forces them to aggregate and infiltrate the tissue, where they undergo respiratory burst, which increases their oxygen use resulting into oxidative damage to the tissue and triggers the production of pro-inflammatory cytokines, ROS and other mediators of inflammation. Initiation and perpetuation of inflammatory cascade by ROS causes subsequent tissue damage through the activation of nuclear factor kappa B (NF-kB), which is a ubiquitous transcription factor involved in the regulation of several genes in immune and inflammatory responses. Oxidants are potent activators of NF-kB while the groups of structurally diverse anti-oxidants of herbal origin are capable of inhibiting NF-kB activation.16

Induction of colitis in rats using acetic acid is a classical method used to produce an experimental model of human IBD. It is both rapid and reproducible and produces diffuse colonic inflammation and definite ulcers resembling many histological characteristics of human UC. In this study colitis was induced by administration of 1 ml of 4 % acetic acid intrarectally. The results confirmed the suitability of the method since an acute and invariably ulcerative colitis was developed in experimental rats.

Several major causative factors in the initiation of human colitis such as enhanced vasopermeability, prolonged neutrophil infiltration and increased production of inflammatory mediators are involved in the induction of this animal model. It affects the distal colon portion and induces non-transmural inflammation, massive necrosis of mucosal and submucosal layers, mucosal edema, neutrophil infiltration of the mucosa and submucosal ulceration.

The protonated form of the acid liberates protons within the intracellular space and causes a massive intracellular acidification resulting in massive epithelial damage. Inflammation is the pathogenesis of IBD and several pathways are associated with inflammatory response in IBD. The inflammatory response initiated by acetic acid includes activation of cyclo-oxygenase and lipo-oxygenase pathways.17

The FH treated rats showed a dose dependent decrease in macroscopic and histopathological score by reducing inflammatory cell infiltration and tissue damage. The colonic damage as determined histopathologically paralleled to that of macroscopically visible damage. A significant increase in serum LDH level was observed in control group 253.67±22.35 IU/ml. There was a dose dependent decrease in serum LDH level in FH treated group.

Increased oxidative stress and increased iNOS activity is a notable feature of IBD.18 Increased iNOS activity yields more oxidative free radicals such as peroxynitrite (ONOO−) to impair the structure and function of the cells. Excess of NO is responsible for the increase in the disease severity by increasing vascular permeability and decrease in the antioxidant defense mechanism by inhibiting the SOD enzyme.19 In our study FH showed a significant NO free radical scavenging activity with maximum % inhibition at a concentration of 100µg/ml.

CONCLUSION: FH is effective in the treatment of IBD by reducing the DAI, CMDI & serum LDH level. It also has NO scavenging activity. The effect of FH in IBD was due to its anti-inflammatory and free radical scavenging activity. The phyto-chemicals probably responsible for its protective effect are oleanolic acid and β-sitosterol, β-amyrin, hispidin etc.

ACKNOWLEDGEMENT: The author acknowledges Department of Biotechnology, Tezpur University for funding the study and thanks the faculties and residents of the Department of pathology and pharmacology for their support.