ABSTRACT: The present experiment was aimed to examine the effect of furosemide (loop diuretic) on ingestive behavior & some hematological parameters.  The adult Wistar rats (n=6/ group) were divided into control group (n =6; Group I) and experimental group (n =6; Group II). The experimental group received furosemide intraperitonially (40mg/kg BW) for a duration of 30 days. The control group of rats was injected with distilled water of same volume intraperitonially. Body weight, food and water intake was measured each day. At the end of the experimental procedure; blood samples were collected to measure the hematological parameters such as total leukocyte count (TLC), blood cell (RBC) count , Packed cell volume (PCV) and hemoglobin (Hb) concentration. The results were analyzed statistically by using student‘t test. P < 0.05 was considered as significant. Our present results showed that, administration of furosemide showed a significant increase   (P < 0.001)  in the ingestive behavior and  body weight. Further, the RBC count, PCV, Hb concentration also showed a significant increase (P < 0.05) whereas the TLC showed a significant decrease (P < 0.05). The present data suggests that furosemide intake alters the ingestive behavior, body weight and causes the variations in observed hematological parameters.

INTRODUCTION:Diuretics are substances that promote diuresis (increased excretion of water in urine) 1. Diuretics are mostly used to decrease ECF volume. Commonly used diuretics are loop diuretics; aldosterone antagonists; thiazide diuretics; a large quantities of osmotically active substances, carbonic anhydrase inhibitors, xanthenes etc 1. Loop diuretics have been effectively utilized for several years in medical practice. It is  prescribed most often for the treatment of various conditions like congestive heart disease; renal failure; cirrhosis of liver; nephrotic syndrome, edema  Inhaled furosemide has proven to be the most efficacious loop diuretic in the treatment of asthma. Furosemide has also shown beneficial effects as an adjunctive agent in the treatment of intracranial hypertension. More recently; the use of continuous infusion loop diuretics has attracted tremendous attention. This method has been found to be beneficial in patients with a diuretic resistance 2.

Several other potential advantages of continuous infusion loop diuretics have been identified; such as; decreased electrolyte loss secondary to a lower dosage of diuretic, production of a more reliable urine flow & decreased alterations in fluid balance 2. Patients suffering from various conditions like congestive heart failure; chronic renal insufficiency; post cardiac surgery participated in various clinical trials to evaluate the benefits of loop diuretics 3. Several potential adverse reactions have also been found in patients treated with a high dose of furosemide 3.

Further studies are needed to establish firmly the benefits of continuous infusion of loop diuretics. The health professionals should also be educated on its potential benefits as a therapeutic alternative 4. The beneficial and adverse effect of furosemide has been demonstrated in a number of clinical trials 5.  Not enough literature is available which can analyze the side effects of furosemide in normal healthy people.

Therefore; the present study was conducted to   find out the after effects of furosemide infusion   on some hematological parameters; ingestive behavior and body weight in normal healthy Wistar rats.

MATERIALS AND METHODS: All experimental procedures and animal maintenance were confined to the strict guidelines of Institutional Ethics Committee and to that of Federal laws for the use of animals in the experiment. Adultalbino rats (150- 200) gm of Wistar strain of either sex were used in the present study. The rats were procured from the central animal breeding center of our university. Animals were housed individually in polypropylene cages (29cms x 22cms x 14cms) during the experimental period at 28±2oC temperature and 50±5% humidity.

Body weight: The body weight of the animals was recorded by weighing them in an animal weighing balance daily. The fractions of weights were adjusted to the nearest gram unit.

Food intake: Food intake of the animals was studied by keeping weighed food pallets in the food cup every day between 9-10 AM during the entire experimental protocol. After 24 hours, the leftover food pellets and spilled rat feed were collected from the tray and weighed. The difference between the food provided and the leftover and spilled food was taken as the food consumed by the rat in 24 hours.

Water intake: The rats were provided tap water ad lib. The measured volume of 100 ml was filled in plastic drinking bottles (125ml). The stopper of this bottle had a metallic nozzle of 5cms length and 0.5 mm bore diameter. The bottle was placed in the bottle holder of the cage. The nozzle of the bottle was passed into the cage at an inclined angle so that the tip of the nozzle was convenient for the rats to lick it up.  The following day (after 24 hours), the remaining water in the bottle was measured and the difference was taken as 24 hours water intake. The water consumption was measured everyday between 9 and 10 AM and the bottles were refilled to 100ml. The procedure was repeated throughout the experimental period.

At the end of experiment, all rats were anaesthetized with sodium pentobarbital (40 mg/kg body weight). About 5 ml blood was collected by heart puncture (with the help of vacutenner). The blood samples were collected and investigated for packed cell volume (PCV) using the Wintrobes method, Hb concentration by Sahlis haemoglobinometry   and RBC, WBC counts by the haemocytometer method 6.

Statistical Analysis: Data were computed for mean values ± standard deviation (SD).  Comparisons between control and stress were performed by student t test with a significant criteria of P<0.05. 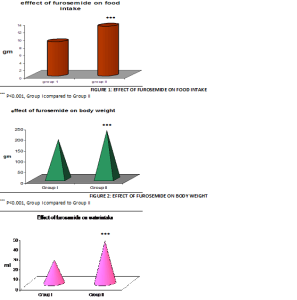 Furosemide promotes water loss from the body. So when there is water deprivation in the body; two mechanisms come into play to regulate the water intake that is stimulation of hyperosmotic and hypovolemic thirst mechanisms 8.

Further, hypovolemia also facilitates the production of erythropoietin which is the potent stimulus for erythropoiesis 9. In the present study, due to increased RBC, there is a corresponding PCV and Hb concentrations.

Previous studies have shown that, high dose of furosemide for a long duration results in a deterioration of nutritional status including both the macro and micronutrients 10.  The significant increase in the food intake and body weight in the present study might be due to the stimulation of the hunger and satiety center to compensate the nutritional loss of macronutrients and micronutrients. Literature survey shows that malnutrition is one of the most important causes of leucocytopenia 10, 11. The observed leucocytopenia in the present study also supports the previous study.

To conclude, the results of the present study suggest that administration of furosemide in normal rats causes a significant increase in the body weight, food and water intake and variations in the observed hematological parameters. Further studies are required in this field to find out the exact cause and mechanisms of the effects of furosemide.