Background: Noise has been recognized as one of the risk factors for cardiovascular diseases. Garlic is one of the oldest medications used in human culture. Garlic is used in herbal medicine for thousands of years and also as one of the main food ingredient. The present study was aimed to investigate the cardioprotective effect of garlic after noise exposure in Wistar albino rats.

Conclusion: The result indicated that noise exposure affects the mitochondrial performance in the myocardium and that long-term consumption of garlic is beneficial. As garlic is already under human consumption, dietary supplementation of garlic for prolonged period may be beneficial as one could not avoid noise in the modern way of living.

INTRODUCTION: Noise is one of the most widespread sources of environmental stress in the modern living environment 1. World Health Organization has declared noise to be an international health problem, when it exceeds an intensity of 90 dB 2. Further, adaptation to noise does not occur even after 30 days of exposure and stress induced oxidative damage to the brain has been reported 3. Noise has been recognized as one of the risk factors for cardiovascular diseases, because it increases heart rate 4, peripheral vascular resistance 5 and arterial blood pressure 6, 7, 8.

Recent reports on noise indicate that noise affects all the organ systems in the body. Chronic exposure to environmental noise, characterized by loudness and low frequency, increases the risk of cardiovascular diseases, particularly hypertension and ischemic heart disease, as well as gastrointestinal and respiratory diseases and deteriorates the immune system 9, 10, 11, 12, 13.

Further, the epidemiologic studies on the relationships between heart diseases and noise pollution suggest a higher risk of heart attack in persons exposed to elevated levels of traffic noise 14. It has been predicted that the cardiovascular disease will be the most important cause of mortality by the year 2015.

Mitochondria exists as ‘closed spaces’ inside the cell in which most of the energy metabolism takes place, hence known as the power house of the cell. Mitochondrial electron transport chain is widely viewed as the main locus inside the cell for generation of reactive oxygen species 15. Over the past few years, mitochondrion has emerged as the central regulators of cell death in a variety of disease states. Hence, understanding the mitochondrial function is essential in order to define the mechanisms leading to cell death and to design strategies aimed at improving myocardial protection 16.

Since cardiovascular diseases are the leading cause of mortality and morbidity in the modern world 17, it is necessary to understand the role noise stress on heart mitochondrial enzymes and a possible antidote. It has also been proved that antioxidants decrease cellular oxidation, thereby reducing the damaging effects of noise exposure 18.

Garlic (Allium sativum Linn.) is used in herbal medicine for thousands of years 19. The Egyptians cited 3500 years before, the usage of garlic for the treatment of heart diseases, tumors, bites and worm infections 20. Garlic contains 0.1-0.36% of volatile oil consisting of sulfur-containing compounds: allicin, diallyl disulfide (DADS), diallyl trisulfide (DATS), etc. These volatile compounds are generally considered to be responsible for most of the pharmacological properties of garlic.

The biological effects of additional constituents of intact garlic are due to lectins, prostaglandins, fructan, pectin, adenosine, vitamins B1, B2, B6, C and E, biotin, nicotinic acid, fatty acids, glycolipids, phospholipids and essential amino acids which have been studied for over several decades 21. There are several reports supporting the pharmacological importance of garlic for hypoglycemic, hypolipidemic, antimicrobial, antitumor, antioxidant and antiatherosclerotic effects 22, 23, 24, 25, 26, 27.

To the extent if it occurs, it suggests that garlic homogenate may provide a nutritional benefit for people exposed to noise stress environment.

Plant materials: Garlic bulbs were obtained from a commercial source and were identified and the voucher specimen (CAS-BH-15) was deposited at the Center for Advanced Studies, Department of Botany, University of Madras, Guindy campus, Chennai, Tamil Nadu, India.

Preparation of the aqueous Garlic Homogenate: Garlic cloves were peeled, sliced, ground into a paste and then suspended in distilled water and a concentration of 125 mg/kg was administered to the rats29. Rats were fed freshly prepared aqueous garlic homogenate within 30 min of its preparation.

Animals: Healthy adult male Wistar albino rats, weighing 150-170 g were used in this study. Animals were maintained in standard conditions with food and water ad libitum, under 12 h light/dark cycle (lights on at 07:00 h) at 25±2°C. All animal procedures were approved by the Institutional Animal Ethical Committee (IAEC) (IAEC No. 08/032/07), University of Madras, Chennai, India as well as by the Committee for Purpose of Control and Supervision of Experiments on Animals (CPCSEA), Government of India.

Noise Stress Procedure: Animals were exposed to noise level of 100 dB (4 h/day) by a white noise generator (0-26 kHz) connected to two loudspeakers (15 W) located 30 cm above the animal cage. The background noise level in the room was recorded to be 44±2 dB, due to the ventilation system. The intensity of the sound was measured by a sound level meter (Cygnet systems-D 2023 Serial No. F02199, India) and maintained at 100 dB intensity 30. To avoid the influence of handling stress on evolution of effects due to noise exposure, control rats were kept in the above described cage during the corresponding period of experiment, without exposing to noise. Animals were exposed to 1 day, 15 days and 30 days of noise stress.

Heart Mitochondria Isolation and Enzyme estimation: At the end of experiment animals were euthanized by cervical dislocation and the heart was dissected out and was homogenized in ice-cold medium containing sucrose (0.32 mM), ethylene diamine tetra acetic acid (1 mM) and Tris–HCl (10 mM; pH 7.4) at 4°C using Potter–Elvehjem homogenizer with a motor driven pestle. The homogenates were then centrifuged at 1000g for 5 min at 4°C.

Statistical Analysis: Data are expressed as mean ± SD. Data comparisons were carried out by one-way analysis of variance (ANOVA) followed by Tukey’s multiple comparison fixing the significant level at p < 0.05. SPSS 12.0 software was used to analyze the data. 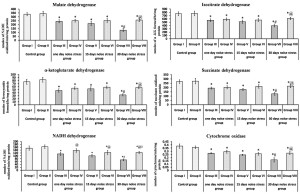 DISCUSSION: The most likely metabolic source of reactive oxygen species (ROS) is the mitochondrion where ‘leakage’ of superoxide occurs 38 in proportion to the rate of oxygen consumption 39. Increased metabolic activity with intensified reactive oxygen species production during noise exposures were also reported 40. In the present study the suppression of mitochondrial tricarboxylic acid cycle enzymes (malate dehydrogenase, isocitrate dehydrogenase, a-ketoglutarate dehydrogenase, succinate de-hydrogenase) and electron transport chain Complex I (NADH dehydrogenase) and Complex IV enzymes (cytochrome C oxidase) was observed. The decrease in these enzymes clearly indicates a reduction in the glucose metabolism and possibly a reduction in oxygen supply.

Increase in the heart rate and blood pressure has been observed in using grinder unit with 90 dB noise level 41. Hence in our study, 100 dB used was definitely a stressor and might increase the autonomic response. Noise influences blood pressure and heart rate by its direct effect on arterial wall tension and by the activation of adrenergic system 42. It has been postulated that persons exposed to environmental noise for prolonged periods, might develop increased blood pressure and thus an increased risk for cardiovascular diseases 43.

It is a known fact that stress activates the sympathetic nervous system which in turn increases the heart rate and it is also essential to remember that only at the expense of diastolic duration the heart rate increases. However, the myocardium receives blood supply only during diastolic phase and diastolic time is an important determinant of myocardial oxygen supply 44. It is now clear that during stress there will be a reduction in blood supply thereby a decrease in the oxygen level.

A sufficiently prolonged reduction in coronary blood flow can result in severe damage to the myocardium; this causes cellular injury and eventually leads to cell death due to apoptosis and/or necrosis 45. Again the fall in these enzyme activities is well correlated by few reports. The increase in energy demands 46 and the decrease in blood flow induce an energy imbalance by the Ca2+ overload 47. This is accompanied by disruption of the mitochondria 48, with inactivation of tricarboxylic acid cycle enzymes and an altered mitochondrial respiration 49. Hypoxia in mammalian cells is often correlated with a reduction in cytochrome levels and mitochondrial enzyme activities 50. A significant increase in systolic blood pressure, diastolic blood pressure and heart rate in individuals working in lock factories have also been reported 41. Moreover, it has been reported that both acute and subchronic noise stimulations lead to ultrastructural modifications in atrial myocardial mitochondria 51.

Particularly in heart muscle, extraction ratio for oxygen is high. Hence, the decrease in oxygen level may inhibit these enzymes. Most studied and reported health-promoting effect of garlic is cardioprotective 52, 53, 54, 55. Several flavonoids were found to possess a vasodilatory effect 56, 57, 58, 59. Since garlic contains flavonoids 60, the above effect may be mediated by garlic. It is also well established that Allium species has been found to be antihypertensive 61. Although garlic appears to hold promise in reducing parameters associated with cardiovascular disease, more in-depth investigations are required. S-allylcysteine is a sulfur containing amino acid derived from garlic and has been reported to have antioxidant property 62.

Pretreatment with S-allylcysteine for a period of 45 days significantly increased the activities of mitochondrial and respiratory chain enzymes and decreased the activities of lysosomal enzymes in isoprotereno induced cardiac toxicity in rat 63. In this study, restoration of mitochondrial enzymes towards normal by garlic homogenate treatment was observed only in 30 days noise stress exposed treated animals but it still showed a marked decrease from control indicating that the noise-induced factors are multi-facet and the dose of garlic used may not be adequate to overcome these changes induced by noise stress.

CONCLUSION: From the above results, it is clear that noise affects the mitochondrial performance in the myocardium and that long-term consumption of garlic is beneficial. Moreover, control animals fed with garlic did not show any alteration in the enzymes, its usage is recommended. As it is under human consumption, based on the current study reports dietary supplementation of garlic for prolonged period may be beneficial as one could not avoid noise in the modern way of living.

ACKNOWLEDGEMENT: We are gratefully thankful to University of Madras, for providing research facilities.