ABSTRACT: Asthma is obstructive disease characterized by bronchoconstriction and inflammation for which beta 2 (β2) agonists that act through the β2 adrenoceptor are the first line agents of choice. Glycine16Arginine (Gly16Arg) is a common single nucleotide polymorphism (SNP) of β2 adrenoceptor whose effects on treatment response remain inconclusive. Hence the study aims to understand and determine the effect of the Gly16Arg SNP on β2-agonist binding and treatment responsiveness. Structure guided mutagenesis was performed with discovery studio tool, energy minimization was performed using Chemistry at Harvard Macromolecular Mechanics(CHARMM) force field, protein confirmation was studied using Ramachandran plot, Molecular docking analysis was performed using Autodock 4.2 and statistical analysis was performed using Graph pad prism 6.0. Statistically significant difference was observed between the binding energies of Glycine16 (Gly16) and Arginine16 (Arg16) groups. Further, the binding energies of β2 agonists were found to be comparatively less in Arg16 group than the Gly16 group suggesting that the Arg16 variant carriers may be poor responders of β2 – sympathomimetic therapy. Presence of functional non synonymous single nucleotide polymorphisms in the β2 adrenoceptor significantly alters β2sympathomimetic binding. Patients with Arg16 variant may therefore be poor or non-responders of conventional bronchodilator therapy

Bronchoconstriction occurs as a result of airway smooth muscle contraction and mucus secretion from the sub mucosal glands caused by increased parasympathetic tone 3. Hence bronchodilators play the central role in the symptomatic management of acute as well as chronic asthmatic episodes. The bronchodilators are generally β2-adrenergic agonists that cause smooth muscle relaxation, resulting in dilation of bronchial passages 4.

The human β2 adrenoceptor is a 413 amino acid G-protein coupled receptor encoded by the adrenergic receptor beta 2 (ADRB2) intronless genes located on chromosome 5q31.325. Binding of β2-sympathomimetics to the extracellular ligand binding domain causes displacement of boundguanosine diphosphate (GDP) by guanosine triphosphate (GTP) followed by the dissociation of the α-subunit from the βγ dimer. The separated α subunit activates the effector, adenyl cyclase resulting in intracellular accumulation of cyclic adenosine monophosphate (cAMP). Increased cAMP formation in the bronchial smooth muscle cell results in relaxation through cAMP-dependent protein kinase a mediated phosphorylation 6. The β2-adrenergic agonists used are broadly classified as short acting and long acting β2 agonists on the basis of their duration of action. The basic structural unit of the β2 agonists is a benzene nucleus attached to an ethyl amine group. For instance, isoprenaline is a synthetic catecholamine whereas salbutamol and terbutaline are non – catecholamine derivatives and structural changes in these ligands renders longer halve lives by conferring resistance to catechol-o-methyl transferases 7, 8.

The common bronchodilators used include Salbutamol, Levosalbutamol, Terbutaline, Isoprenaline, Procaterol etc. Variations in bronchodilator response have been reported due to several single nucleotide polymorphisms associated with the ADRB2 gene. Pharmacogenetic screens have identified approximately more than 50 SNPs within the coding and promoter regions of ADRB2, some of which are known to alter response to β2-adrenergic agonists 9-11. The common non synonymous SNPs of the β2 adrenoceptor that tend to alter the protein conformation are Gly16Arg, Glutamate 27 Glutamine (Glu27Gln), Valine 34 Methionine (Val34Met) and Theonine 164 Isoleucine (Thr164Ile). The most prominent coding SNP is Gly16Arg and Gly16 receptor has been reported to be associated with increased agonist-promoted down regulation than the Arg16 variant, but there is discrepancy in the existing data 12-14.

A few initial studies have reported that Arg16 homozygotes have increased bronchodilator response to short acting β2-agonist than Gly16 homozygotes15-17. However, further studies have reported the Gly16 allele to be associated with increased bronchodilator response while a few studies have reported no significant association between Gly16Arg functional SNP and drug responsiveness. Thus the results remain inconclusive 18-21. Hence, in order to understand and determine the effect of the Gly16Arg SNP on β2-agonist binding and responsiveness, a receptor – ligand interaction study was carried out with both the wild type and Arg16Gly mutant variants of β2 adrenergic receptor.

The high resolution crystal structure of human β2-adrenergic G protein coupled receptor was retrieved from the protein data bank. FASTA sequence of the retrieved structure revealed the presence of glycine at position 16 22. Hence the Arg16 variant was prepared by structure guided mutagenesis using the Discovery Studio tool. Both the wild type and mutant targets were pre-processed by standard methods prior to binding analysis.

CHARMM is a general and flexible program for macromolecular energy minimization and dynamics calculations that utilizes both classical and quantum mechanical energy functions for molecular systems 23. Energy minimization of both the wildtype and mutant targets were carried out under CHARMM27 force field. Gradient was set to 0.05.

Three dimensional structure and conformational stability of the protein was analyzed by means of Ramachandran plot. Ramachandran plot analysis was carried out individually for the energy minimized Gly16 and Arg16 receptors.

In order to understand the difference in binding conformation and affinity, salbutamol was individually docked to both the wild type and mutant variants of human beta 2 adrenergic receptor. Autodock 4.2 tool was used for molecular docking analysis. Both the receptor and ligands were prepared by addition of hydrogen’s and gasteiger charges. A grid defining the active site was constructed before running the docking simulation. Genetic algorithm was adopted for conformer search while docking 24.

Energy minimization of the Gly16 and Arg16 variants was carried out. The initial and post minimization potential energies of both the allelic variants are listed in Table 1.

A shift in the position of the residues and difference in dihedral angles is noted between the proteins bearing glycine and arginine at position 16 respectively. The difference in the amino acid pattern as observed in the ramachandran plot is suggestive of Arg16 single nucleotide polymorphism to be non-synonymous that alters the conformation of the wild type variant. Thus the ligand binding domain of the ADRB2 gene product is altered and β2 – agonist binding to the altered active site is ultimately affected. This finding correlates with the results of the active site analysis.  The active site residues of the gly16 and arg16 variants differ to a considerable extent suggesting a conformational difference of the ligand binding region. The active site residues of the two variants are listed in Table 2.

Desolvation energy is a prime parameter that decides a molecules interaction with its pharmacodynamic target. In the biological environment, all drug binding pockets of a target protein remain solvated and hence a ligand cannot as such occupy the active site unless it dislodges the water molecules. The similarity of docked structures is measured by computing the root mean square deviation and clusters are created based on the comparison of conformations and estimated RMSD values. The docking score of selected ligands with the Gly16 variant and Arg16 variant receptors are shown in Table 3 and 4 respectively.

The hydrogen bonding interactions established by the ligands with the active site of both Gly16 and Arg16 receptors are shown in Table 5. The number of hydrogen bonds and the residues involved are significantly different between the two groups due to the conformational change induced by the non-synonymous single nucleotide polymorphism.

Statistically significant difference was observed between the binding energies of Gly16 and Arg16 groups. A p-value of 0.017 was observed at a confidence interval of 95% which clearly indicates that presence of Arg16 single nucleotide polymorphism alters β2 – sympathomimetic binding and activity. Further, the binding energies of β2 agonists were found to be comparatively less in Arg16 group than the Gly16 group suggesting that the Arg16 variant carriers may be poor responders of β2 – sympathomimetic therapy. 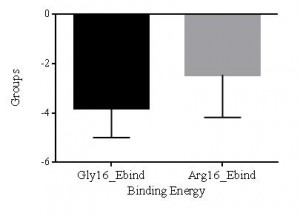 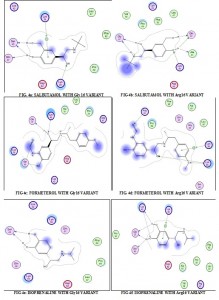 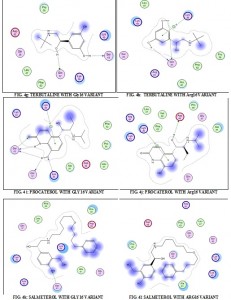 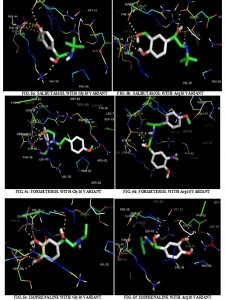 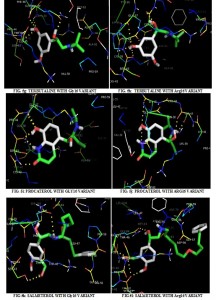 CONCLUSION: Presence of functional non synonymous single nucleotide polymorphisms in the β2 adrenoceptor significantly alters ligand binding. Binding of β2 sympathomimetic to the Arg16 variant was found to be considerably less than that of the Gly16 variant. Hence pharmacogenetic screenings of patients who are non-responders of β2 sympathomimetic therapy should be carried out individualize therapy regimens. Further, a constant demand for novel molecules that bind to the mutant variants of common receptors exists.

ACKNOWLEDGEMENT: The authors are thankful to the management of Vels University for providing excellent research guidance and support.

CONFLICT OF INTEREST: The authors do not have any conflict of interest