The effect of different percentages of a hydrophilic polymer and impact of granulation technique on the release profile of gliclazide from matrix system was investigated. Matrix tablets of Gliclazide were prepared by both direct compression and wet granulation process using METHOCEL K15M CR. Release kinetics of Gliclazide matrix tablets were determined using USP paddle method at Phosphate buffer (pH 7.4) and conducting for 10 hours. Statistically significant differences were found among the drug release profile from different polymeric concentration and granulation process. The release mechanism was explored and explained with zero order, first order, Higuchi and Korsmeyer model. It’s found that at lower concentration of polymer (15%) most of the formulation tends to Higuchi release kinetics and at higher concentration (30%) best fit with Zero order release kinetics.   Higher polymeric content (30%) in the matrix decreased the rate of the drug due to increased tortuosity and decreased porosity. At lower polymeric level (15%) the rate of drug release was elevated. In this study effect of granulation process on drug release also examined and found that wet granulation extend the release more than that of the direct compression technique.

INTRODUCTION: Matrix systems appear to be a very attractive approach from the economic as well as from the process development and scale-up points of view in modified-release system 1. Methocel (HPMC) is used frequently as a rate-controlling polymer in matrix tablets. Methocel offers the advantages of being non-toxic and relatively inexpensive; it can be compressed directly into matrix and is available in different chemical substitution, hydration rates and viscosity grades 2.

When hydrophilic matrices interact with aqueous media (water, buffers, physiological ﬂuids, etc.), both the polymer hydration (glassy/rubbery transition) and the dissolving of soluble components take place. Dissolution of the drug at the tablet surface causes a burst effect in the release proﬁle of the system. This is more or less pronounced depending on the drug solubility and the polymer hydration rate 3. The release kinetics working after the initial which in turn depends on the relative position of the eroding front (separating the release environment from the gel and generally moving outwards) and the swelling front (separating the dry glassy tablet core from the gel layer and moving inwards).

Additionally, in the case of sparingly soluble drugs, a third front, the diffusion front can appear between the outer  portion of the gel layer, where the drug is completely dissolved and the inner one, where un dissolved drug particles still exist 4. Delivery of drug from hydrophilic matrices is known to be affected by many factors such as the polymer swelling and erosion behavior, the drug dissolution characteristics, the drug/polymer ratio, the granulation technique and the tablet shape 5.

The purpose of the present study is to develop a reproducible extended release dosage form of Gliclazide using water swellable pH independent hydrophilic matrix to evaluate in-vitro release characteristics of Gliclazide from formulated tablets. The particular emphasis has been given on Methocel K15M CR- a hydrophilic matrix system on the release profile of drug.  The sustaining behavior of this polymer has been assessed by varying the polymer percentage in the formulation. Effect of granulation process on drug release also was compared in present study.

In this study, Gliclazide has been a drug of choice. It is a member of second generation sulphonylurea oral hypoglycemic agent used in the treatment of non-insulin-dependent diabetes mellitus (NIDDM). It improves defective insulin secretion and may reverse insulin resistance observed in patients with NIDDM.

Currently, both conventional and modified release preparation are available. But most of them are failed to give reproducible and desirable drug release profile. So, a lot of researches are carried out to prepare modified release gliclazide tablets with pharmacokinetic characteristics suited to the circadian glycemic profile of type- 2 diabetes. This approach will minimize the complications associated with diabetes mellitus. The development of a generic version of gliclazide will reduce the total requirement of API and reduce the price of drug and make the drug more affordable to the patients. To achieve this objective, the present study will be effective to formulate an appropriate modified release oral dosage form.

Preparation of Gliclazide Matrix Tablet by:

Direct Compression: Individual ingredient was taken according to Table 1 and was sieved through 30 mesh sieve. At first, Gliclazide and Methocel K15M CR were mixed uniformly. Latter lactose was added with this mixture and finally magnesium stearate was added with it. Tablets were made by a compression machine (Erweka, TR 16, Germany) using a 5X10 mm caplet shaped punch and die set.

Wet Granulation: Individual ingredient was taken according to Table 1 and was sieved through 30 mesh sieve. At first, Gliclazide and Methocel K15M CR were mixed uniformly and latter lactose was added with this mixture. Then about 30% (w/w) purified water was added with the mixture drop wise with continuous rubbing to get desirable soft granules. This mixture was passed through 1mm sieve to reduce the particle size and dried at tray dryer at 75°C to reduce the LOD below 15%. The granules were again passed through wet miller and dried at tray dryer to reduce the LOD below 2%.  Finally, magnesium stearate was added to it for lubrication. Prepared granules were then compressed following the same procedure as for direct compression.

In vitro dissolution study of Gliclazide tablet: In vitro dissolution study was carried out for 10 hours in a USP XXII dissolution apparatus (Erweka DT700, Germany) using paddle method. Rotation of the paddle was set at 100 rpm and dissolution media was 900 ml phosphate buffer of pH 7.4 maintaining the temperature at 37±0.5°C. Dissolution samples were withdrawn at predetermined intervals and were filtered through syringe filter. The samples were directly or after appropriate dilution were analyzed by a spectrophotometer (Shimadzu UV 1800, Japan) to determine the absorbance at the wavelength of maximum 226 nm and 290 nm using 1cm cell and then the difference between these two absorbance’s were calculated.

The total % of Gliclazide release from the formulation DK15M15, DK15M20, DK15M25, DK15M30 was 88.22%, 64.566%, 56.83%, 55.293% respectively. It has been observed that the release rate has been extended with the increase of polymer % and with the decrease of lactose % which is due to a decrease in the total porosity i.e. release is extended to long period. Lactose causes a decreased tortuosity of the path of the drug due to its preferential solubility than Methocel K15 M CR, by its swelling effect; additionally weakened the integrity of the matrix (Nixon, Patel and Tong, 1995). The highest percent of drug release within 10 hours is obtained from DK15M15 where polymer content is 15% of total tablet weight. But in DK15M30, the polymer content is 30% of total tablet weight and lactose content is 52.83%, the release of drug is controlled with 55.29 % within 10 hours. 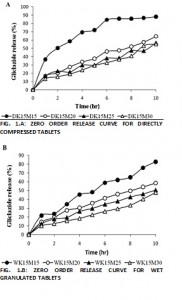 From table 3, it is shown that the formulation WK15M15 follows Higuchi release model where the formulations WK15M20 and WK15M25 follow first order kinetics. But WK15M30 best fit with zero order release. With the increase of polymer concentration gliclazide release tends to Higuchi to zero order release. Formulation WK15M150 follows Fickian (case I) diffusion (n: 0.394 < 0.45) and others follow Anomalous/non- Fickian transport (n: >0.45 or < 0.89). 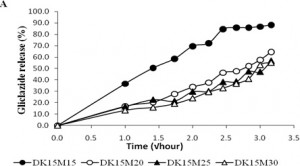 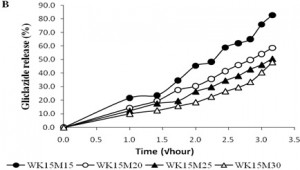 CONCLUSION: From the investigation it was found that tablets prepared by direct compression offered maximum drug release in all polymeric contents than those were prepared by wet granulation technique. It was also observed that higher polymer content in the matrix decreased the rate of the drug due to increased tortuosity and decreased porosity and at lower polymeric level the rate of drug release was elevated. The tablets showed good tableting properties which may also be taken in account to evaluate the polymeric content and granulation process. The result generated in this study showed that the profile and kinetics of drug release were functions of polymeric content and granulation process.