ABSTRACT: Practising complementary and alternative medicinal therapy has become a boom worldwide. There is a dearth in communication between doctors and the patients regarding concomitant use of complementary medicines like ayurvedic churnas and other drugs of natural origin with allopathic drugs. This usage might magnify or oppose the effect of synthetic drug leading to interactions. Use of herbals along with allopathic treatment is inevitable in treatment of chronic diabetes which might lead to drug interaction. The present study was undertaken to evaluate pharmacokinetic interaction between herb Gymnema sylvestre and allopathic drug Sitagliptin Phosphate in streptozotocin and high fat diet-induced type II diabetes mellitus in rat model. Female Sprague Dawley rats were grouped into following groups. Group 1: Vehicle Control (VC), Group 2: Disease Control (DC), Group 3: Sitagliptin Phosphate (STG) (20 mg/kg), Group 4: Gymnema sylvestre (GYM) (400 mg/kg), Group 5: Sitagliptin Phosphate (20 mg/kg) and Gymnema sylvestre (400 mg/kg) (STG + GYM). After giving proper treatment to the rats, blood samples were withdrawn from retro-orbital plexus at 0th, 2nd, 4th, 8th and 12th hours on first day of treatment with Sitagliptin Phosphate and combination of Sitagliptin Phosphate with Gymnema sylvestre in order to check alteration in absorption parameter by determining the change in area under curve (AUC) of STG, using a newly developed and validated HPTLC method. It was found that, AUC of STG gradually decreased in presence of Gymnema sylvestre at the given dose. Further studies need to be carried out at various other doses to evaluate possible interactions.

INTRODUCTION: Due to the increasing prevalence of diabetes at an alarming rate, the search for a holistic approach in treatment, and the attitude that some patients have about synthetic medicines are leading individuals to embrace alternative therapies. The accelerating trend and inclining mind set of the population towards  usage of as CAM (Complementary Alternative Medicine) is well documented, especially among diabetic patients 1.

Although herbal medicines are widely used across the globe for prevention, treatment and management of disease, their standardisation, quality control and regulations still possess a great demur 2, 3.

Herbal products which lack quality control and standardisation checks, physicochemical testing of raw materials as well processed formulations may prove to be of great threat when consumed by an individual. In addition to this, the insufficient in-vivo pharmacokinetic and pharmacodynamic data of the bioactives might rise complexities 4. A major factor impeding the therapeutic utilisation of medicinal plants is the lack of information on various herb-drug interactions.

Except for the use and pharmacological activity of the plant, not much information has been available on their safety, mechanism of interactions with  other medicines 5, 6. Gathering all the necessary data has become utmost important in this area as millions and millions of people consume herbal drugs concomitantly along with prescription drugs.

These interactions are not due to an alteration in the plasma concentration of either drug but rather because of the net effect that can be additive, synergistic or antagonistic. These adjectives can refer to alteration in the object drug's intended therapeutic effect, or can refer to the change in the toxicity levels and adverse side-effects as well 8. On the other hand, pharmacokinetic interactions witness changes in parameters like absorption, distribution, metabolism or elimination of the object drug due to the presence of the interfering drug. Unlike pharmacodynamic interactions, these interactions do result in changes in the plasma concentration of the object drug, and as a consequence, the toxic or sub-therapeutic levels occur more frequently.

Reported Herb-drug Interaction with medicinal plants used in diabetes: Herbs used in treating diabetes have been reported to interact with some of the prescription drugs. The interactions mentioned either prove to be useful or deleterious depending upon the mechanism of action of both- the herb as well as the drug. Few interactions proved to be a boon to the patients consuming herbs along with prescribed drugs, while some led to deleterious outcomes. Bitter melon is said to have a positive outcome in controlling diabetes 9. Fenugreek is reported to have synergistic effect in controlling hyperglycaemia and hyperlipidaemia when given along with Sitagliptin Phosphate 10.  Garlic preparations have been found to increase the bioavailability of Propranolol 9.

Onion consumption reduces oxidative stress which proves to be great for the human body 9. Concomitant use of Ashwagandha along with anxiolytics and anti-stressors lead to synergistic effects. Several reports have highlighted garlic’s potential for increasing the risk of postoperative bleeding if consumed along with NSAID’s. A clinical trial suggested that garlic changed some pharmacokinetic of Paracetamol. Animal and clinical studies imply hypoglycaemic effects, which could explain the fall in glucose levels in patients taking chlorpropamide by producing active nitrogen compounds. Garlic tend to reduce the efficacy of anti-AIDS drugs like Saquinavir 11, 12. Ginkgo biloba is one of the common herb involved in drug interactions is reported to have potent drug interactions with Nifedipine, Fluoxetine, Buspirone, Insulin, Monoamine oxidase inhibitors  and with drugs metabolized by cytochrome P450 enzyme system.

Hence, Ginkgo should be used with caution 11.  Case reports demonstrate that patients taking Warfarin or Aspirin have experienced severe spontaneous bleeding after self-prescribing Ginkgo at recommended doses. Ginseng also showed interactions with anticoagulant effects of Warfarin and Monoamine oxidase inhibitor Phenelzine 9. It interacts with drugs that decrease the seizure threshold, thereby increasing the risk of seizures 9. It is documented in literature that it alters the action of drugs like Furosemide, Estrogen, Corticosteroids  9. Ginseng contains glycosides which have structural similarities to Digoxin, thus it is said to interfere with Digoxin assay.

Rationale behind the study: Type II diabetes mellitus is generally associated with alteration in the lipid levels. There are various treatments available for the same; be it the traditional complementary medicines as well as allopathic drugs. There might be interaction taking place when both therapies are practiced concomitantly. On the basis of folklore use and literature, the following herb and drug of synthetic origin were selected for the interaction study.

The antidiabetic activity of Gymnema sylvestre has been documented in ayurvedic books and also published in the literature, but very few literatures are available to confirm the safety of consuming the herb along with oral antidiabetic drugs.

Since no studies were performed on evaluating the interaction of consumption of Gymnema sylvestre along with drug from new class of DPP-IV inhibitors i.e. Sitagliptin Phosphate, these two were selected as herb and drug respectively for studying herb-drug interaction at pharmacokinetic level.

Animals: Female Sprague Dawley rats were procured from the Bombay Veterinary College and Glenmark Pharmaceuticals, Mumbai, India. Rats were housed in standard polypropylene cages (three animals per group) and kept under good hygienic conditions in the animal house of the institute. Animals were maintained under standard experimental conditions i.e. in a 12-hour light- dark cycle, temperature (24 ± 2°C) and relative humidity (60%) controlled facility of the institute. Standard laboratory diet and water ad-libitum was provided to rats throughout the study. The experiment was carried out in accordance with the ethical guidelines of committee for the purpose of control and supervision of experiments on animals (CPCSEA), Government of India. The study was conducted after the approval of protocol by Institutional Animal Ethics Committee (IAEC) affiliated to CPCSEA with protocol number IAEC/PR/2014-2015/03.

Bioanalytical Method Development and Validation: High Performance Thin Layer Chromatography (HPTLC) was selected as a chromatographic method in order to find the area under curve (AUC) of Sitagliptin Phosphate when given alone and in the presence of herbal extract-Gymnema sylvestre in rat plasma. A new bioanalytical HPTLC method was developed to determine Sitagliptin Phosphate in rat plasma and validated using EMA and US-FDA guidelines.

After one week of acclimatisation of rats, study was initiated. Rats weighing above 250 grams were randomly divided into groups containing equal number of animals (n=6) and were fed with high fat diet throughout the study except for the vehicle control group. Intraperitoneal shot of 40 mg/kg Streptozotocin (STZ) was administered to overnight fasted rats except for the vehicle control group. After 24 hours of STZ challenge, the rats were subjected to blood withdrawal for the estimation of serum glucose levels. The rats found to be hyperglycaemic were selected for the study.

Bioanalytical Method Development and Validation: Bioanalytical procedure was optimized using spiked sample of STG (100 µg/ml). In eppendorf tube of 2 ml capacity, 250 μl of plasma was transferred and spiked with 50 μl of 100 μg/ml methanolic solution of Sitagliptin Phosphate using a micropipette. To this 50 μl of 30 μg/ml standard solution of IS Zolpidem Tartrate was added. To this 1 ml of extracting solvent i.e. methanol was added and the tube was vortex mixed for 2 minutes followed by centrifugation at 6000 rpm for 10 minutes at– 5°C. Supernatant (1ml) was transferred to a glass tube and evaporated to dryness using solvent evaporator under stream of nitrogen gas. The temperature of water bath in evaporator was set at 60°C. The residue was reconstituted using 100 μl of methanol and 30 μl was applied on chromatographic plate for analysis. Extracts of blank plasma were prepared using above procedure in which drug solution was replaced with 50 μl of methanol. The optimized procedure used is summarized below.

The final optimized method was statistically validated and was found to be precise, accurate, stable, robust and rugged. Few of the validated parameters are mentioned below:

Selectivity: No interferences from plasma components were seen at the Rf of Sitagliptin Phosphate and IS- Zolpidem Tartrate. The method was found to be selective at LLOQ (10 μg /ml) for Sitagliptin Phosphate. The blank responses were found to be less than 20 % of area response of LLOQ and 5 % for IS Zolpidem Tartrate. Fig. 1 and 2 denote densitograms of blank plasma and drug respectively. 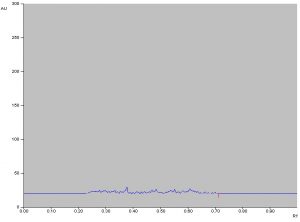 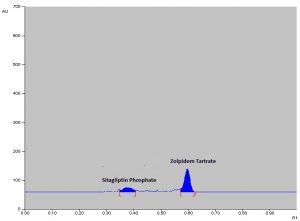 Calibration Curve (CC): Using the selected model, the method developed was linear over the whole range of concentration from 10 to 200μg/ml. All the three calibration curves passed the criteria for linearity. The results of back calculated concentration of calibration standards are presented below in Table 1.

Where, n=5 indicate number of replicates

TABLE 3: RESULTS OF RECOVERY STUDIES OF SITAGLIPTIN PHOSPHATE AND IS- ZOLPIDEM TARTRATE:

TABLE 4: RESULT OF PHARMACOKINETIC ANALYSIS- PERCENTAGE DECREASE IN AREA OF SITAGLIPTIN PHOSPHATE IN THE PRESENCE OF GYMNEMA SYLVESTRE IN RAT PLASMA

DISCUSSION: It can be inferred that the presence of Gymnema sylvestre decreased the bioavailability of Sitagliptin Phosphate when administered concomitantly in rats. Thus stating that there exists a pharmacokinetic interaction at absorption level. This may be attributed to the fact that being an herb, Gymnema sylvestre might have altered the bioavailability of Sitagliptin Phosphate by any of the following mechanism of absorption interaction:

Effects of P-Glycoprotein: P-Glycoprotein is a multidrug-resistance gene product found in a variety of human tissues, including the gastrointestinal epithelium. This efflux pump is expressed at the luminal surface of the intestinal epithelium and opposes the absorption of unchanged drug by transporting compounds out of enterocytes back into the gastrointestinal lumen. Sitagliptin being a substrate for P-glycoprotein, this might be the reason for decreased bioavailability of Sitagliptin.

ACKNOWLEDGEMENT: We would like thank our Principal, Dr. Vilasrao J. Kadam for providing us with all the facilities necessary to carry out the research work.