ABSTRACT: Improper diet can affects the brain and can increase the risk for mental disorders and neurodegenerative diseases like autism. Dietary modification can sometime be helpful to children with autism. The present study examined the effects of a high lipid diet on orally administered ampicillin -induced neurotoxic rats and compared with propionic acid models of autism. Forty young male western albino rats were divided into four equal groups. The first group served as the control; the second group was given an oral neurotoxic dose of propionic (PA) (250 mg/kg body weight/day) for three days. The third group received an orogastric dose of ampicillin (50mg/kg for three weeks) with a standard diet. Groups 4 was given an orogastric dose of ampicillin and fed with high-lipid diets, for 10 weeks. The possible effects of ampicillin (Amp) in presence of high lipid diet on selected neurotransmitters (5HT, DA, NA, glutamate and glutamine) and a cytokine IL-6 were tested and compared with the neurotoxic effect of propionic acid (PA). The results show a significant improvement of the neurotoxic effect of ampicillin when rats were fed with high lipid diet.

INTRODUCTION: Autism is a complex neuro developmental disorder caused by interaction between genetic and environmental factors 1. Although autism is behaviourally defined and its biochemical defects are still not well understood, however children with autism show higher rates of in vivo lipid metabolism than healthy controls 2, 3. Foods and nutrients can impact the symptoms of autism as the foods eaten by the child can have a direct effect on brain.

Deficiencies in essential fats or enzymatic defect that removes essential fats from brain cell membranes are common in people with autism 4. To secure normal mental capacity a dietary supplementation with vital lipids is required throughout our whole lifespan. The intestinal microbiota plays a crucial role in the development of autism. Individuals with Autism Spectrum Disorders (ASD) often suffer from gastrointestinal problems 5. GI problems in children with autism may contribute to the severity of the disorder. The cause of these GI problems are partly relate to abnormal gut flora and possibly to the excessive use of oral antibiotics which can alter gut flora. Several studies have reported significantly higher oral antibiotic use in children with autism vs. typical children 6-7.

Antibiotics may play key roles in modifying the gut bacterial flora adversely, allowing the overgrowth of harmful bacteria that are normally suppressed by an intact normal gut flora or probiotics 8, 9. Antibiotics can also disturb normal flora to allow the overgrowth of propionic acid producing bacteria which in turn has been associated with the development of autism 10. Ampicillin-induced neurotoxicity has also been described in the literature in very low birth weight neonates 11. A recent study by El-Ansary 12 has shown ampicillin-induced neurotoxicity that might induce autistic traits in animal model of autism.

Microbes in the GI tract are essential for host digestion including the breakdown of complex carbohydrates including dietary fibers, production of short chain fatty acids and synthesis of Vitamins. As a result, the composition of the microbiota has the ability to influence host metabolic functions. Dietary fat also influences the composition and metabolic activity of the gut microbiota.

Dietary factors can affect multiple brain processes by regulating neurotransmitter pathways, synaptic transmission, membrane fluidity and signal-transduction pathways. Dietary lipids, which were originally thought to affect the brain through their effects on cardiovascular physiology, are garnering recognition for their direct actions on the brain. Dietary fat also influences the composition and metabolic activity of the gut microbiota. The fact that dietary factors and metabolic activity of the gut microbiota impact the symptoms of autism, this study was designed to see the effect of high fat diet on disturbed gut flora which was induced through the orally administrated neurotoxic doses of Amp 12 in rats and was compared with the rodent model with autistic features. Rodent model was developed through orally administered neurotoxic dose of PA 13.

Experimental Animals: The experimental assays for this study were performed on 40 young (approximately 21 days old) male western albino rats (45 to 60 g). Rats were obtained from national research center and allowed to drink water ad libitum for a period of one week before stating the treatment.

Experimental Design: Animals were randomly assigned to four groups of ten rats each.

Group 1: The first group of rats received only phosphate buffered saline and were used as a control group (n = ten).

Group 2: The second group was given oral neurotoxic doses of PPA (250mg/kg body weight/day for three days; n = ten) and were referred to as the oral buffered PA-treated group 14.

Group 3: The third group received an orogastric dose of ampicillin (50mg/kg for three weeks) with standard diet and referred to as the ampicillin group.

Groups 4: These were given orogastric doses of ampicillin (50mg/kg for three weeks), and were fed with a high-lipid diet for 10 weeks. This dosage was appropriate and selected according to clinical guidelines and the diagnosis and treatment manual (30-100mg/kg in humans) 15, 16.

Diet: The standard rats/mice chow consisted of 47% complex carbohydrates, 21% protein, 4.0% fat, 5.0% fiber, and 8.0% ash. The special diets characterized as lipid-rich diet was made by adding corn oil to the regular chow.

Tissue Preparation: At the end of the feeding trial, the rats were anesthetized with carbon dioxide and decapitated. The brain was removed from the skull and was dissected into small pieces and homogenized as a whole in 10 times w/v bi-distilled water to be used for IL-6 Selected samples were kept at -80 °C until further use for neurotransmitters (noradrenaline, dopamine, serotonin) assay using HPLC.

The electrochemical detector model HP 1049 A (Hewlett-Packard) with glassy carbon working electrode was used at a voltage setting of +0.65 V for monoamines. The detector response was plotted and measured using a chromate-integrator. The concentration of Noradrenaline, dopamine, serotonin in each sample were calculated from the integrated chromatographic peak area and expressed as ng/100mg wet tissue.

Assay of IL-6: IL-6 was assayed using a Quantikine ELISA kit (R & D Systems, Minneapolis, MN, USA. A microplate was precoated with a monoclonal antibody specific for rat IL-6. Fifty microliters (50μL) of each standard, control, or sample were placed in separate wells. The reagent was mixed by gently tapping the plate frame for one minute after being covered with the adhesive strip provided. The plate was incubated for two hours at room temperature and the immobilized antibody bound any rat IL-6 present.

After washing away unbound substances, an enzyme linked polyclonal antibody specific for rat IL-6 was added to the wells. Following a subsequent wash step to remove unbound antibody-enzyme reagents, 100μL of substrate solution was added to each well and the plate was incubated for 30 minutes at room temperature. The enzyme reaction yielded a blue product that turned yellow when the stop solution was added. The intensity measured for the colour, was in proportion to the amount of rat IL-6 bound in the initial step. The sample values were then read off the standard curve.

Assay Glutamine and Glutamate: Rat brain Glutamine or glutamates were measured independently using   ELISA Kit, a product of Cusabio. Antibody specific for Gln, or Glut has been pre-coated onto a microplate. Standards and samples are pipetted into the wells and the respective immobilized antibody binds any Gln, or Glut present. After removing any unbound substances, a biotin-conjugated antibody specific for Gln or Glut was added to the wells. After washing, avidin conjugated Horseradish Peroxidase (HRP) was added to the wells. Following a wash to remove any unbound avidin-enzyme reagent, a substrate solution was added to the wells and colour developed in proportion to the amount of Gln or Glut bound in the initial step. The colour development was then stopped and the intensity of the colour was measured. The minimum detectable dose was typically less than 19.5pmol/ml and 3.12nmol/ml for Gln and Glut respectively.

Statistical Analysis: The data were analyzed using the statistical package for the social sciences (SPSS, Chicago, IL, USA). The results were expressed as mean ± standard deviation of the mean (S.D). All statistical comparisons were performed using the one-way analysis of variance (ANOVA) test complemented with the Dunnett test for multiple comparisons. Significance was assigned at the level of P < 0.05. Receiver operating characteristics curve (ROC) analysis was performed. Area under the curve (AUC), cut off values, and degree of specificity and sensitivity were calculated. Pearson’s correlations were performed between the measured parameters.

RESULTS: Table 1 and Fig. 1 show the percentage change in addition with mean ± S.D of noradrenaline, dopamine, serotonin, IL-6, glutamine and glutamate in the brain homogenates of the four groups of rats. There was a significant depletion in the noradrenaline (67.51% and 85.42%), dopamine (85.42% and 85.42%), serotonin (85.42% and 85.42%) levels in the brain of the PA and Amp treated rat respectively compared to the control groups (P < 0.001). However, feeding with high lipid diet for 10 weeks post antibiotic treatment in group IV significantly reversed the Noradrenaline (98.06%), dopamine (109.44%), and serotonin (100.42%) back to normal levels compared to control. IL-6 was significantly higher in PA-treated group (130.07%, P < 0.001), while non-significant higher in Amp however IL6 activity was non-significantly decreased in those fed with lipid rich diet.

TABLE 1: MEAN ± S.D. OF THE MEASURED PARAMETERS IN THE FOUR STUDIED GROUPS

aP value between control group and each other group using Independent Samples T-Test. 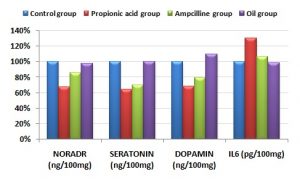 FIG. 1: PERCENTAGE CHANGE OF ALL PARAMETERS IN ALL GROUPS COMPARED TO CONTROL

Table 2 and Fig. 2 present Pearson’s correlations between the measured parameters.

** Correlation is significant at the 0.01 level. 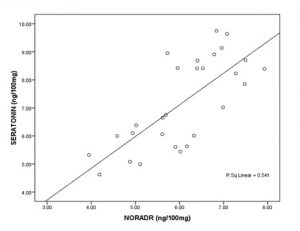 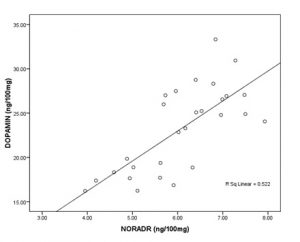 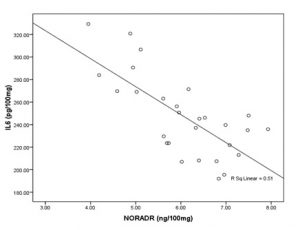 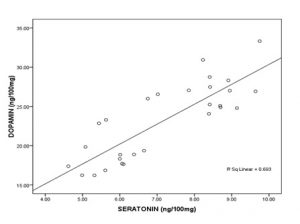 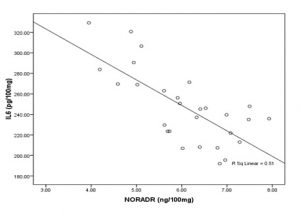 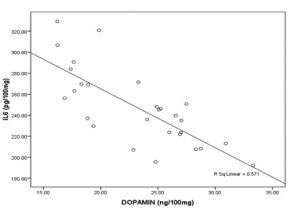 Receiver operating characteristics curves are collectively presented in Table 3 and Fig. 3 as curve A, B and C.

Area under the curve (AUC) cut off values; sensitivity and specificity are listed in Table 3.

TABLE 3: ROC-CURVE OF ALL PARAMETERS IN ALL GROUPS 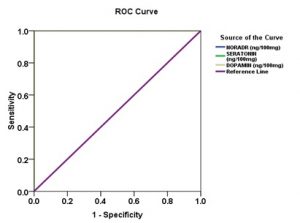 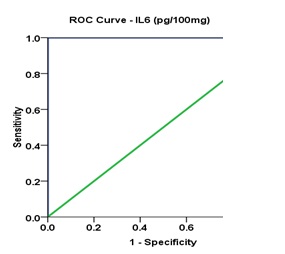 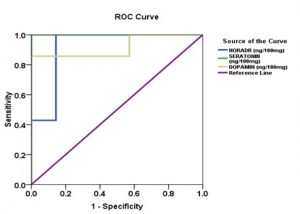 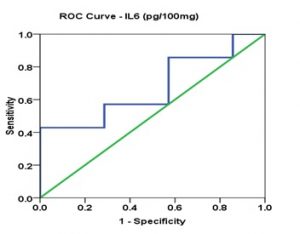 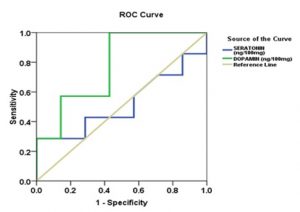 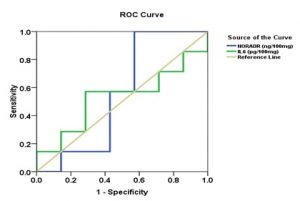 DISCUSSION: Our study evaluated the role of lipid diet in preventing the neurochemical alterations in brain caused by exposure to Amp (Table 1). As shown in Table 1, a significant decrease in noradrenaline, dopamine, serotonin glutamine levels and increase levels of IL6 shown in the brain of the Amp exposed mice was reversed by lipid rich diet, thus reducing some of the neurochemical changes which were induced by Amp exposure. PA has recently been reported to induce persistent biochemical and behavioural autistic features in rat pups thus the effect of Amp exposure was compared with the PA model of autism. The results of the present experiments demonstrated that Amp treatment for three weeks has affected the neurotransmitter levels in brain of rats which was almost the same as that found in PA model of autism. Amp treatment along with lipid rich diet induced satisfactory improvement of neurotransmitter levels in brain tissue.

Amp-induced neurotoxicity may perhaps be amid the etiologies of late-onset autism due to alterations in gut microbiota and the induction of propioni bacteria 11. Disturbances in the gut flora can induce oxidative stress which in turn can increase the neurotoxic effect of the drug and can remarkably affects the brain in rodent models of autism 12. Several recent studies have shown that dietary factors alter the microbial community resulting in biological changes to the host and overall, dietary changes could explain 57% of the total structural variation in gut microbiota whereas changes in genetics accounted for no more than 12% 18.

In a recent study it was found that high-fat diet fed to rats caused specific microbial alterations in microbiota such as enriched populations of Lactobacillus spp. and Enterococcus spp. and depleted Bacteroides spp. and Prevotella spp. 19. Bacteria have the capacity to generate many neurotransmitters and neuromodulators. For example, certain Lactobacillus produce gamma-amino butyric acid (GABA) and acetylcholine; Escherichia, Bacillus and Saccharomyces spp. produce norepinephrine (NE); 5HT; dopamine (DA) 20. This may be the reason for enhancing the neurotransmitter levels back to normal in brain tissue with the post lipid rich diet treatment with Amp in group four.