ABSTRACT: Aim: To investigate the antiparkinsonism activity of hydro alcoholic root extract of P. zeylanica L (PZE) alone and its combination with aqueous extract of C. sinensis leaves (AECS) in reserpine induced model. Materials and methods: Parkinsonism (PD) was induced by sub cutaneous administration of reserpine (1 mg/kg) for 5 days. The extracts/drugs being tested were administered orally (p.o) 60 min prior to the administration of the reserpine for five days. Behavior parameters were analyzed using catalepsy, open field and stepping test. Result: Repeated administration of reserpine (1 mg/kg; s.c) for a period of 5 days significantly increased catalepsy and decreased the locomotor activity as compared to normal animal. All the groups ie L-dopa + carbidopa (syndopa), PZE alone and its combination with C. sinensis showed significant (P<0.001) reduction in catalepsy, akinesia and increase in locomotor performance.Conclusion: It is concluded that P. zeylanica alone and its combination with C. sinensis have a protective effect against PD, while bi-herbal extracts showed more significant protective effect. Hence may offer a safer therapeutic approach to the treatment of PD and drug induced dyskinesia.

INTRODUCTION: Parkinson’s disease (PD) is an idiopathic, slowly progressive, and chronic neurodegenerative disorder characterized by the selective and progressive loss of the dopaminergic (DAergic) neurons in the substantia nigra pars compacta. The degeneration of dopaminergic neurons results in threshold reduction of approximately 80% dopamine in the striatum, which lead to the emergence of neuromuscular executive dysfunction, learning problems and mood disorders.1 PD has four cardinal features: bradykinesia (slowness and poverty of movement), muscular rigidity, resting tremor and impairment of postural balance leading to disturbances of gait and falling.1-2

DAergic neurons leading to depletion of DA in striatum.3 Therefore, the compounds that have properties, such as mitochondrial function enhancement and antioxidant ability may provide the neuroprotective effect.4 The pharmacotherapy of PD was limited mostly to symptomatic treatments none of them prevent disease from progressing.2 Levodopa has been considered the gold standard drug therapy for Parkinson’s disease, but it is limited only to relief symptoms and long term use may cause serious side effects that include involuntary movements (dyskinesia). The side effects of allopathic medicines for PD are highly alarming hence the current research is now focusing on herbal medicines and alternative systems of medicine. In addition to several synthetic agents modulating various pathways, certain plant constituents like polyphenols, flavonoids also exhibited some activity against experimentally induced PD. 4 More over herbal medicines are used to treat PD in ancient medical systems in Asian countries such as India, China, Japan and Korea based on their own anecdotal or experience-based theories. Mucuna pruriens commonly known as velvet beans or cow itch are used in case of spasms associated with Parkinsonism.5 Viciafaba (Broad beans) is an herb used for PD and possess higher degree of antiparkinsonism activity compared with L-dopa. 6

The current study envisages in evaluating the antiparkinsonian effect of hydro alcoholic root extract of Plumbago zeylanica alone and its combination with Camellia sinensis in reserpine model of PD. The studies suggest that free radicals have a key role in neurodegenerative disorders, including Parkinsonism. Free radicals induce lipid peroxidation that leads to neuronal death. This may be due to reduced level of antioxidant such as glutathione that may lead Parkinsonism patient more vulnerable to oxidative stress. 7 P. Zeylanic8 and C. Sinensis 9 have potent antioxidant activity; which may reduce the degeneration of neurons associated with PD. These plants contain compounds classified into alkaloids, flavonoid, polyphenols, catechol, terpenes which are the most promising candidate for the treatment of PD.4

The root of P. zeylanica contains several bioactive constituent like L-dopa, plumbagin, droseron, chitranone, triterpinoid, anthraquinone. 10 L-dopa present in the herbal drugs reported to provide antiparkinsonism activity without producing drug induced dyskinesia, which is the main side effect of synthetic drugs. 5 The dried root extract of P. zeylanica may ameliorate Parkinsonism without developing side effects. P. zeylanica shown to have a number of actions in the central nervous system (CNS) including stimulatory 11 and nootropic action 12. Neuroprotective mechanism ascribed to P. zeylanica in these studies may also claim to have beneficial effect in PD.

L-dopa is inactive by itself because it does not cross blood brain barrier, but is the immediate precursor of dopamine. L-dopa is decarboxylated to dopamine by the enzymes mono amine oxidase and catechol- o-methyl transferase (COMT). About 1-2% of orally administered L-dopa crosses the blood brain barrier, is taken up by the surviving dopaminergic neurons, converted to dopamine, which is stored and released.

In modern practice L-dopa is administered with peripheral decarboxylase inhibitors which prevent peripheral decarboxylation of L-dopa and increase the availability of dopamine in the brain. This not only reduces the dose but also the peripheral side effects of L-dopa. 13 Vast epidemiology data indicated that green tea consumption reduces the occurrence of neurodegenerative disorders such as Parkinsonism and Alzheimer’s disease. 14 Various studies suggested that EGCG may inhibit COMT-catalyzed methylation of endogenous and exogenous compounds. 15

We assumed that C. sinensis may prevent the metabolism of dopamine present in the P. zeylanica root extract by inhibiting the enzyme COMT and allows maximum L-dopa to reach the CNS. COMT inhibition may also preserve dopamine formed in the striatum. The synergistic action of C. sinensis extract may reduce the dose and peripheral side effect of L-dopa.

The study protocol was approved by the Institutional Animal Ethical Committee (IAEC) of UCP bearing IAEC no: [012/MPH/UCP/CVR/13]. All the animals were housed in polypropylene cages, maintained under standard husbandry conditions (12h light and dark cycles, room temperature (27+2oc) and 45-55% relative humidity. The rats were provided with standard pellet diet and water ad libitum throughout the course of the study.

Reserpine induces depletion of central catecholamine stores. The sedative effect can be observed in rats shortly after injection, followed by signs of eyelid ptosis, hypokinesia, rigidity, catatonia, and immobility. These phenomena can be antagonized by dopamine agonists. The behavioral parameters including the motor activity were assessed after continuous treatment of Reserpine for a period of 5 days at a concentration of 1 mg/kg.

Open field apparatus consist of squares (61×61) were used for the study. Blue lines were drawn on the floor with a marker. The lines divided floor into sixteen squares. A central square was drawn on the middle of open field.  The rats were centrally placed in the open field apparatus and were allowed to walk without restraint inside the area for 5 min and following behavioral aspects were noted:

i). Ambulation: this was measured in terms of the number of squares crossed by the animal;

iv). Activity in Central Square: number of central squares crossed by the animal. Two consecutive days animals were exposed to the apparatus for habituation. The open field was cleaned with a 5% water-alcohol solution before behavioral testing to eradicate possible bias due to smells left by previous rats.

Akinesia means loss or impairment of voluntary activity. The level of akinesia was assessed by stepping test. The rat were allowed to stand its forelimbs and allowed to move while its hind limbs were lifted and the number of steps taken with both forelimbs was recorded for 30s.

The catalepsy was assessed by placing the animal’s forepaws on a horizontal bar positioned at 9 cm above the bench surface. The duration of catalepsy, which was defined as an immobile posture, keeping both forepaws on the bar, was measured up to a maximum of 180s.

The preliminary phytochemical studies were performed for testing different phytochemical constituents present in hydro-alcoholic root extract of P. zeylanica L and aqueous extract of C. sinensisleaves. The observation indicates the presence ofalkaloids, phenolic compounds, flavonoids, phytosterols and terpenoids in both PZE and AECS leaves. In addition to this PZE showed the presence of tannins and proteins Table 1.

The open field test was done in order to determine the effect of administration of P. Zeylanica and its combination with C.sinensis upon spontaneous locomotor activity. Locomotor parameters were significantly enhanced in Syndopa, PZE alone and bi-herbal extracts treated group when compared with Reserpine group. The combination of extract has more significant activity on ambulation (P<0.01), rearing (P<0.001), grooming (P<0.05) and activity in centre (P<0.05) as compared to PZE alone Figure 2. 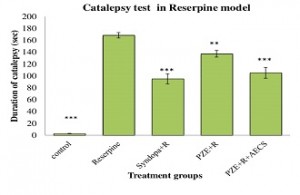 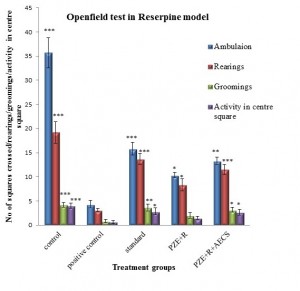 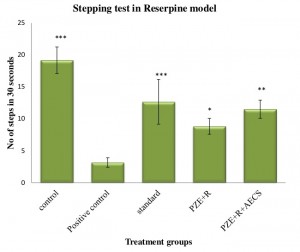 Hydro-alcoholic extract of P.zeylanica and aqueous extract of C.sinensiswere administered orally to male wistar albino rats and number of steps in 30 seconds was measured. The number of steps in 30 seconds was significantly enhanced on 5th day in Syndopa (P<0.001), PZE alone (P<0.05) and its combination with AECS (P<0.01) treated groups as compared to Reserpine induced Parkinsonism group Figure 3.

DISCUSSION: Reserpine, an alkaloid extracted from the roots of an Indian plant, Rauwolfia serpentina, blocks the ability of aminergic transmitter vesicles to take up and store biogenic amines probably by interfering with an uptake mechanism that depends on Mg2+ and ATP. 19 In reserpine induced model of PD, catecholamine stores were depleted and motor syndrome characterized by decreased initiation and speed of voluntary movements, rigidity, and a hunched posture was observed.

These symptoms bear many similarities to those seen in Parkinson’s disease and are ameliorated by dopaminergic anti-parkinsonian drugs. Thus, the reserpine-treated rodent provides a useful model of Parkinson’s disease.20 The animals exhibited a debilitating phenotype that was confirmed by behavior analysis like catalepsy, open field and stepping test. The study revealed bradykinesia and increased muscular rigidity in rats exposed to repetitive administration of reserpine Figure 1- 3.

Repeated administration of reserpine (1 mg/kg; s.c) for a period of 5 days significantly increased catalepsy and decreased the locomotor activity as compared to normal animal. All the groups ie L-dopa + carbidopa (syndopa), PZE alone and its combination with C. sinensis showed significant (P<0.001) reduction in catalepsy, akinesia and increase in locomotor performance.

The mechanism due to amelioration take place may attribute to one or more pharmacological mechanism. Protective effects against reserpine induced behavioral changes suggest that these plant extracts has influence on aminergic pathway.  Reserpine binds tightly to adrenergic vesicles in central and peripheral adrenergic neurons and remains bound for a prolonged period of time. The interaction inhibits the vesicular catecholamine transporter that facilitates the vesicular storage. Catecholamine leaks into the cytoplasm, where they are metabolized through the interneuronal monoamine oxidase, and lead to the formation of 3, 4- dihydroxy phenyl acetic acid (DOPAC) and hydrogen peroxide.

The antiparkinsonism effect of PZE and AECS are produced possibly by acting as a free radical scavenger or by the presence of natural L-dopa in P. zeylanica roots or by inhibition of COMT by EGCG in green tea extract leading to increase in dopaminergic neurotransmission and decrease in DA metabolites thereby decreasing the formation of ROS. These findings suggested a possible protective role of plant extracts in oxidative stress-induced neurodegeneration and may be beneficial adjuvant or an alternative agent in the treatment or prevention of Parkinsonism and related disorders.

CONCLUSION: It is concluded that P. zeylanica alone and its combination with C. sinensis have a protective effect against reserpine induced PD, while bi-herbal extracts exhibited  more significant activity than single administration. Hence may offer a safer therapeutic approach to the treatment of Parkinson’s disease. Being a neuroprotectant it could be used as an effective adjunct to L-dopa for the treatment of neuroleptic-induced extrapyramidal side effects (management of drug induced dyskinesia). These may be valuable for identifying lead compounds for anti-parkinsonism drugs, keeping in mind the side effects of presently used drugs. The standardization of the extracts, identification and isolation of active principles along with pharmacological and mechanism based studies of these principles may be the future aspect for further detail studies.