EFFECT OF HYDROPHILIC SOLVENTS ON ENHANCING TRANSDERMAL DELIVERY OF ALBUMIN

EFFECT OF HYDROPHILIC SOLVENTS ON ENHANCING TRANSDERMAL DELIVERY OF ALBUMIN

Objectives: Transdermal drug delivery suggests several advantages and has been vastly investigated over last decades.Chemical enhancers improve the quantity of drug penetration through the skin. In this study, hydrophilic solvents have been used as enhancers to promote dermal penetration of albumin.

Methods: 20 different formulations containing albumin and hydrophilic solvents were prepared. Transdermal absorption experiments for each formulation were performed using a diffusion cell and a slice of chicken skin as model at 32°C for 3 hours. Samples from the medium were withdrawn and analyzed for albumin concentration. Cumulative amounts of albumin were plotted for each formulation.

Conclusion: PG, EA and glycerolcould act as enhancers for transdermal delivery of albumin. Such delivery was increased using 4 mL of them instead of 2 mL and using exposure time of 3 hours instead of 1.5 hours. The most effective enhancer was found glycerol, showing a maximum albumin permeation of 98.0 mg. Therefore, the study suggested using glycerol as enhancer for transdermal delivery of albumin or other similar proteins in cosmeceutical products.

The main barrier for transdermal drug delivery, is the skin’s horny layer or stratum corneum (SC). This layer must be altered for passage of drugs through the skin. This has been the subject of research for pharmaceutical scientists during the two latest decades 2. Extensive research on chemical enhancers has been performed over the last 20 years which form the main strategy of formulation-design approaches for transdermal drug delivery 3. It is now believed that formulation components can improve the quantity and rate of transdermal absorption 4. Permeation of a drug through the skin in the presence of an enhancer is related to physico-chemical characteristics of the enhancer and the drug 5-7.

Several enhancers have been used to enhance different drugs skin permeation. Such enhancers include aliphatic acids, fatty acids, esters, alcohols, oils and terpens1 and also variety of nanoparticle including elemental or polymeric nanoparticles 7-15.

Albumin is a hydrophilic polypeptide with molecular weight of 67 kDa. It binds water, cations (such as Ca2+, Na+ and K+), fatty acids, etc. Albumin and other nutrient proteins have been used in many cosmetic products and albumin is sometimes used as a surfactant 16-20. Also we considered the albumin as a model protein.

In this study, we aimed to deliver the albumin through the skin. Certain hydrophilic solvents were used to enhance the albumin transdermal penetration. The solvents include deionized water (DW), acetic acid, ethyl acetate (EA), methanol, ethanol, 2-propanol, isopropyl alcohol (IPA), glycerol, ethylene glycol (EG) and propylene glycol (PG). All the solvents have been widely used in different cosmetic products for their various advantages 21.

Albumin skin permeation was determined using a diffusion cell (ex-vivo method) using a piece of chicken skin. The use of in vitro models is also supported by the fact that SC, the principle site of enhancer action, presents similar behavior in vivo and in vitro 17.

Preparation of formulations: Every formulation (formulations 1-20) were prepared  mixing evenly 500 mg of albumin (as active ingredient) with 2 or 4 mL of each solvent of table 1 and 2 (as enhancers), to make a lotion, using mechanical overhead mixer (Heidolph, RZR 2020, Germany) at 3000 rpm for 20 minutes.

Permeation test: The transdermal penetration of albumin was determined by a diffusion cell with an effective diffusional area of 10 cm2 with a glass cap. Its 30 mL volume receiver chamber was filled with DW. An isolated piece of skin of a 3 months old chicken was fixed between two chambers as the diffusional membrane, making an almost stretched condition of the skin. Isolated skins were carefully selected in order to have low underlying fat tissue. They were accurately selected in order to be completely similar in terms of thickness of fat tissue and the number of hair follicles. Each formulation (lotion) of tables 1 and 2, was placed and spread on the skin.

Then the cap (donor chamber) was placed and fixed on that to avoid evaporation. The cell was placed in a shaker-incubator (Heidolph incubator 1000, Heidolph co., Germany) with a temperature of 32°C for 3 hours 3, 21. Every 15 minutes the cap was taken away and the lotion was rubbed evenly by a swab to help the albumin penetration. 3 ml of DW was taken after 1.5 and 3 hours and analyzed for the concentration of albumin at 278 nm using a UV-Vs spectrophotometer (Perkin-Elmer-Lambda 25, USA) 22, 23. Each time 3 ml of fresh DW was replaced to keep the sink condition. Cumulative quantities of permeated albumin (mg) were plotted for the related formulations.

Statistical analysis: Each formulation was tested 3 times for albumin permeation and the reported data was the mean±SD (n=3). One-way analysis of variance (ANOVA) was used for comparing the mean differences. SPSS for Windows (release 11.5.0) was employed for statistical analysis. p-value <0.05 was considered to be significant.

In addition, the permeated albumin for the formulations of the second group were calculated as significant from those for the third group (p<0.05). Furthermore, the difference between permeated albumin after 1.5 and after 3 hours related to a certain formulation, was calculated as significant (p<0.05), for the formulations 5-6 and 10-20, revealing more permeation after 3 hours than that after 1.5 hours.

Moreover, similar significancies were existed for a certain enhancer (formulation) when used 2 mL and 4 mL (p<0.05), (except for DW and acetic acid solution), proving the positive effect of using higher concentrations of enhancers on the permeation. 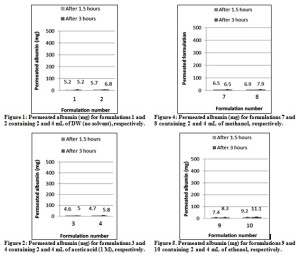 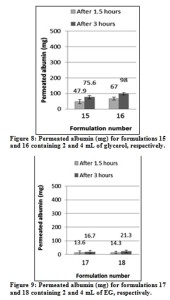 DISCUSSION: According to the results (and several existed literature), in the absence of enhancers, albumin did not considerably permeate the skin. That was due to its hydrophilicity and high molecular weight (67 kDa). Increase in water content (comparing formulations 1 and 2), did not change the albumin permeation. Using acetic acid (1M) instead of DW as a skin permeability enhancer, almost did not change the albumin permeation.

Increase in the amount of acetic acid caused no more change in the permeation. Therefore, acetic acid (1M) was not recognized as an enhancer for albumin permeation. That was because of the fast evaporation of the acetic acid content and the low concentration of the acetic acid solution (1M) which could not be increased to avoid its harmful effects on skin. Methanol increased the permeation very slightly more than acetic acid (1M) and no difference was generated by increased amount of methanol. Ethanol showed albumin enhanced permeation even (slightly) more than that for methanol. Such effect was almost not higher for increased amount of ethanol. The reason of such slight effects is that methanol and ethanol can barely dissolve lipids of skin layers which are the main barrier for the penetration of albumin. Albumin permeation after 3 hours, approximately showed no difference from that after 1.5 hours, for formulations containing DW, acetic acid, methanol and ethanol, confirming the weak or absence of enhancing effect of these solvents.

2-propanol, IPA and EG each caused an enhancement of albumin permeation more than what caused by DW, acetic acid (1M), methanol or ethanol. Therefore, they were recognized as acceptable but weak enhancers for skin permeation of albumin. Among these three, the most enhancing effect was related to IPA, the moderate was related to 2-propanol and the least was related to EG. Although increase in amount of each of the three enhancers lead to an increase in albumin permeation (larger than those for DW, acetic acid (1M), methanol and ethanol), but such increase occurred mostly for IPA and then for 2-propanol in relation to EG.

It means that IPA not only showed more enhancing effect but also presented more enhancing effect at a high concentration. In contrast to the above solvents (first group), increase in exposure time (from 1.5 to 3 hours), generated increased amount of permeated albumin for each of the IPA, 2-propanol and EG. Such enhancing effect of these three enhancers is attributed to their weak to moderate ability for dissolving the skin lipids promoting the albumin permeation. That is why they could not make an outstanding permeation improvement.

Ultimately, the most permeation was occurred using glycerol which was introduced as the most effective enhancer with improved enhancement by increase in both exposure time and enhancer concentration. It also presented a higher speed of action compared to EA. The enhancing effect of EA, PG and glycerol are due to their powerful ability to dissolve skin lipids.

In addition, PG and glycerol can absorb and retain water which strongly helped the permeation of albumin. Moreover, glycerol interact well with albumin leading to dissolve it in water content of the skin, concluding in a massive transfer of albumin across the skin layers.

For the formulations containing 4 mLs of the enhancers, the permeated amounts of albumin were plotted for both exposure times, 1.5 hours (Figure 11) and 3 hours (Figure 12). For most of the formulations (enhancers) the maximum permeation of albumin was occurred at 3 hours exposure time and when the enhancer was 4 mL (Figure 12). Thus Figure 12 presents a complete comparison between maximum permeations obtained for all formulations. As it is observed in figure 11, EA, PG and glycerol most effectively improved the permeation of albumin. The maximum permeated albumin was obtained using glycerol as enhancer (4 mL) with exposure time of 3 hours, although still a huge amount of albumin (402 mg) did not permeate the skin. Comparing Figures 11 and 12, also demonstrates that despite the more total permeated albumin for PG compared to EA (Figure 12), EA possessed a significant more rapid enhancing action compared to PG (Figure 11). In case of speed of enhancing, again glycerol possessed the highest of all the enhancers.

Although a few methods have been published for the transdermal delivery of albumin24,25, the method introduced in this study, i.e. using the enhancers, is an easier and less harmful way.

CONCLUSION: Among the hydrophilic solvents used in this study, Glycerol was found as the most potent enhancer for transdermal delivery of albumin and PG and EA were classified as the second order, while IPA, propanol and EG revealed weaker effects. Moreover, glycerol and EA could act more rapid than others. Such enhancers can effectively be used in topical products for improvement of skin permeation of albumin or other similar proteins.

ACKNOWLEDGEMENTS: The research was supported by Hamedan University of Medical Sciences.

Conflict of interest: The authors report there are no conflicts of interests.