ABSTRACT: Usage of incense smoke has aesthetic importance. But, studies have shown that incense smoke has oxides of carbon, nitrogen, sulphur, which has ill effects on human health. Polyphenol analysis showed the presence of phenol-like compounds in the water extracts of the incense. This study was conducted to understand the impact of exposure of cells to these types of smokes by performing viability test using squamous epithelial cells. Different methods followed to confirm the results, and the results of these studies showed that 80% of the squamous epithelial cells survived when exposed to smoke as compared to controls (no smoke treatment). Further studies were extended on the cell lines BEAS-2B (normal lung cells) and cancerous cells EB-3 cells. Results based on the catalase assay and microscopic studies show that incense smokes have a lethal effect on the normal cells while not showing any harmful effects on cancerous cells and these studies reproduced using trypan blue assay.

INTRODUCTION: Incense is an aromatic natural material that releases fragrant smoke when burned. Incense is used for aesthetic reasons, meditation and ceremony. Certain aromatic materials considered to be typically plant-based include the bark, various resins, flowers, etc. The specific ingredients used in incense can vary by region and manufacturer. The gas products from burning incense include CO, CO₂, NO₂, SO₂, and others. Incense burning also produces volatile organic compounds such as benzene, toluene, and polycyclic aromatic hydrocarbons (PAHs). The above components might induce respiratory dysfunction when inhaled.

The actual basis of this work comes lined after some interesting articles based on the impact of Auramine O, an incense smoke ingredient, promotes lung cancer malignancy 1. Consistently, incense smoke condensates are found to have mutagenic and genotoxicity 2.

The saying “Prevention is better than Cure” makes it important to forecast this research work which gives knowledge about the impact of incense smoke on the cell lines. As it is seen around the country, incense sticks are used widely in temples and homes every day. Thus, it becomes very important to understand the harmful effect of smokes on human health. In this line, the study was designed to impart awareness among the human community regarding their usage and effects. It is believed that only natural ingredients have been used for the preparation of incense sticks, but it’s also important to know the adverse effects of exposure to the smoke for a long time.

It is already known that smoke consists of several harmful gases and compounds, among which the aerosol forms 70 and 88% of the total pollution.

Phenol Estimation: Polyphenols in extracts react with specific redox reagents (Folin-Ciocalteu reagent) to form a blue complex that can be quantified by visible-light spectrophotometry. The reaction forms a blue chromophore constituted by a phosphotungstic-phosphomolybdenum complex, where the maximum absorption of the chromophores depends on the alkaline solution and the concentration of the phenolic compound. Extracts of polyphenols were prepared for this study 3. A known mass of incense powder was prepared and added with a known volume of dimethyl sulphoxide (DMSO). Further, for the studies mg/ml concentration was maintained.

MTT Assay: Viability assays are used to measure the proportion of viable cells after a potentially traumatic procedure, such as primary disaggre-gation, cell separation or cryo-storage. MTT assay checks the viability of the cell subjected to the study of its potentiality against the extracts, possibly is cytotoxic. Cells here are squamous epithelial cells in the exponential phase of growth are exposed to smokes of Black and Brown stick incense. The number of surviving cells is then determined indirectly by MTT dye reduction. The amount of MTT-formazan produced can be determined spectrophotometrically once the MTT formazan has been dissolved in a suitable solvent (DMSO) 4.

Cell Line Study: BEAS-2B the normal lung epithelial cells were obtained from CEMR, JSS Medical College, JSSAHER. The cells (BEAS-2B) were maintained in DMEM with Ham’s F-12 medium containing FBS, Glutamine, and Pen/Strip. The cells were grown in t-25 flask and subcultured at regular intervals. EB-3 Cancer cell line is used in this study to interpret the effects of smoke on cancerous cells. EB-3 is a human lymphoma cell that grows as a suspension culture. These cells are grown in the RPMI medium along with an antibiotic (streptomycin) and FBS (10%).

Induction of Incense Smoke to the Cells: The incense sticks were surface sterilized by wiping with 70% ethanol and subjected to UV radiation for 30 min. The cells in the flasks were then exposed to the smoke of black and brown sticks for a period of 5 min. Control is maintained, which is not exposed to the smoke. The exposed cells and the controls were observed for any morphological changes for a period of 24 h and 48 h.

Trypan Blue Exclusion Assay: The Trypan Blue exclusion test is used to determine the number of viable cells present in a cell suspension. It is based on the principle that living cells possess intact cell membranes that exclude the trypan blue dye, whereas dead cells do not exclude thus appear blue in color when observed under a microscope. The cells exposed to smoke and controls were trypsinized and collected along with the floating cells. The suspension was later centrifuged, and the pellet collected was Re-suspended in 1ml of PBS. 10μl of each (control, Black, brown incense) was mixed with 20μl dye and then examined under microscope. As explained above, a viable cell will have a clear cytoplasm, whereas a nonviable cell will have a blue cytoplasm5.

Catalase Assay: Catalase is an antioxidant enzyme that is present in most aerobic cells. It serves as one of the body’s defense systems against H2O2, a strong oxidant that can cause intracellular damage. It is found in high concentrations in Red Blood Cells and the liver, while lower concentrations are found in skeletal muscle, brain, and heart.

Each unit of catalase decomposes 1μM of H2O2, per minute at 25°C and pH 7.0. Catalase assay adds to the family of antioxidant biomarkers and provides another useful tool for oxidative stress investigations. Catalase reacts with a known quantity of H2O2. The reaction is stopped after exactly one minute with a catalase inhibitor.

In the presence of peroxidase, the mixture is prepared by adding 10μl of the sample with 30% H2O2 (9.8M) and sodium phosphate buffer (pH-7). The reaction at every 30 sec is recorded by spectro-photometric readings with decreasing values 6.

Phenol Estimation: The concentration of phenols is 16μg/ml and 38μg/ml, as indicated in the graph below. Both black incense and brown incense have concentrations indicating the presence of considerably moderate levels of polyphenols which on burning can lead to the formation of oxides of carbon, nitrogen, etc. 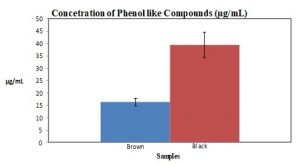 FIG. 1: PHENOL LIKE COMPOUND ESTIMATION FOR WATER EXTRACTS OF BROWN AND BLACK INCENSE STICKS. Y-AXIS CORRESPONDS TO CONCENTRATION IN µG AS GALLIC ACID EQUIVALENT /mL. BROWN AND BLACK WITH 16 AND 38 µg/mL

MTT Assay: It is essential to study cytotoxicity and to understand the sustainability of the cells. According to the assay, cells show less viability as that of control which is 100% viable. This indicates that smokes of brown and black incense marginally harm the cells and are required to study the stability of DNA. The exposed cells and the controls were applied for the study after a period of 24 h. 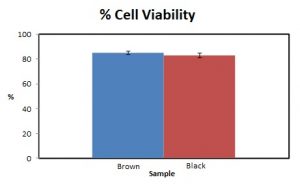 Catalase Assay: Now, when the antioxidant activities have been known, the study proceeds with accountancy of extracts subjected to the analysis of catalytic activity. There is a decrease in the values evaluating the lower catalytic activity with an increase in the oxidative stress, which may be stimuli to the cancerous conditions.

When the cells were treated with 30μl of 30% H2O2 the cells show decreasing catalytic activity due to cell instability. Therefore, the cells experience increased levels of oxidative stress. Results show that brown incense stick smokes are more harmful to the cells. In the study, catalase was quantified by finding the concentration of peroxide using spectrophotometer. Results have shown that BEAS-2B has higher leftover peroxide, and EB-3 has less leftover peroxide. This may be due to the less viable cells in the BEAS-2B and the high amount of viable cells with respect to EB-3 cells. 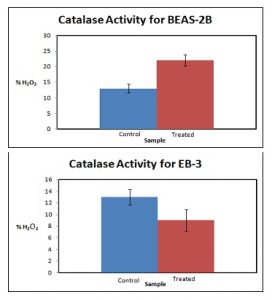 FIG. 3: CATALASE ACTIVITY STUDIES FOR THE CELL LINES AFTER THE TREATMENT WITH THE SMOKES OF INCENSE STICKS. BEAS-2B HAS SHOWN MORE HYDROGEN PEROXIDE LEFTOVER (24%) COMPARED TO EB-3 CELLS (9%)

Microscopic Study: For the study equal number cells were taken and were treated with the smoke. Results show that BEAS-2B cell lines were adversely affected by the incense smoke while the EB-3 cells multiplied vigorously when subjected to treatment.

A microscopic image shows a decrease in the BEAS-2B and an increase in the EB-3 cells with respect to the same volume. 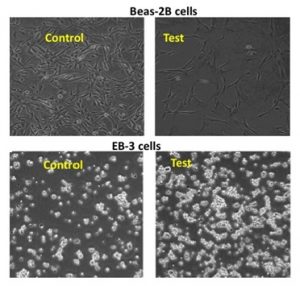 FIG. 4: EFFECT OF SMOKE ON BEAS-2B AND EB-3 CELLS AFTER EXPOSURE OF CELLS FOR 5 MINUTES FOR TWO DAYS

Trypan Blue Assay: For an accurate determination, the total number of cells overlying 1 mm2 in the hemocytometer should be between 20-50 cells/square.

FIG. 5: VIABILITY OF THE CELL LINES AFTER THE TREATMENT WITH THE SMOKES OF INCENSE STICKS. BEAS-2B HAS SHOWN DECREASE IN THE VIABILITY (65%). EB-3 CELLS HAVE NO EFFECT OF SMOKE ON ITS VIABILITY

Our result is in contrast with the work of Jian-Chen T et al., 1, which showed no effect on the BEAS-2B when a carcinogenic compound auramine O from incense sticks was exposed. But, another study on the animals have shown that the composition of the incense sticks have a carcinogenic effect by causing DNA damage and can also lead to cardiovascular problem 7.

As discussed earlier, incenses contain a mixture of natural and unnatural ingredients that create small, inhalable particulate matter. Based on the study, some of this particulate matter as carcinogenic, meaning it could cause cancer 8. This study also found an association between higher cancer risk and incense use. Most of these cancers were upper respiratory tract carcinomas or lung carcinomas.

CONCLUSION: According to the studies, the chemical components in the incense can cause risk to the respiratory system, and hence care should be taken to ventilate tremendously the house or the place around. It is put forward specifying for more time needed to obtain further conclusive results. Meanwhile, it is a good practice to keep the room well ventilated when burning incense. It will effectively dilute the indoor air pollutants and hence reduce the risk of exposure.

ACKNOWLEDGEMENT: Authors would like to thank Dr. C. K. Renukarya, Director, Pooja Bhagavat Education Centre, Post Graduate Wing of Mahajana First Grade College, for facilitating the above works. It will be a pleasure to thank, management of Mahajana Education Society for providing all the financial and lab facilities for the work to carry out successfully. The authors would also like to thank CEMR, JSS Medical College, JSSAHER for providing BEAS-2B and EB-3 cell lines. It is our duty to thank Dr. Jyothibala Chauhan, Professor and Head, Department of Life Scinence, Pooja Bhagavat Memorial Mahajana Education Centre, Post Graduate Wing of SBRR Mahajana First Grade College for all the supports provided in fulfilling the work.