ABSTRACT: Dental biofilms are majorly developed by Streptococcus mutans, a cariogenic microorganism and are one of the major effects of glucosyltransferases (Gtf) produced by it. This study was conducted to determine the antagonistic potential of probiotic bacteria against S. mutans biofilm formation. We studied the anti-biofilm formation ability of three Lactobacillus species viz L. rhamnosus, L. acidophilus and L. plantarum. Inhibition of biofilm formation was checked on a cell culture cluster. The samples with robust inhibitory activity were selected to check their effect on Gtf activity by estimating the changes in the amount of glucan synthesized, the Gtf catalyzed reaction product. The results showed that, the cell free broth of L. plantarum and L. acidophilus has significant inhibitory and displacement activity on biofilm formation by the cariogenic organism when employed individually and in combination. Further, the interference (80% reduction) in glucan synthesis observed by applying these lactic acid bacteria (LAB) samples suggested their possible role in inhibition of glucosyltransferase (insoluble) [Gtf-I]. In conclusion, our studies demonstrated repressive activities of two LAB species, on the expression of S. mutans virulence genes to reduce its biofilm formation which may be associated with Gtf-I enzyme. Thus the observations would help to develop a potent strategy to combat dental plaque.

INTRODUCTION: Regardless of all the advancements in oral health sciences, one of the worst global health concerns affecting humans of all ages (especially children) is that of plaque related and caries related diseases. Dental caries is an annihilation of the dental hard tissues. Their uncritical quality and omnipresence have decreased their importance in the overall human health. Nonetheless the global encumbrance regarding the care of these dental issues can be astounding.

Cariogenic bacteria, fermentable carbohydrates, a susceptible tooth and host and time are the predominant etiologic agents. The most potent and highly caries-associated bacteria were found to be Streptococcus mutans 1. Fermentable carbohydrates, especially sucrose 2, are utilized by S. mutans and other cariogenic organisms. This leads to the excessive production of acids. With the accumulation of acids, only cariogenic organisms prevail on the dentine surface decreasing the occurrence of other bacteria and thus leading to the formation of a protective biofilm. Therefore a diseased condition persists on the tooth surface until the biofilms are either mechanically or chemically treated for. One important feature of S. mutans is its possession of gtf-B, that codes for Glucosyltransferase (insoluble)

[Gtf-I]. This particular enzyme is required for the production of insoluble glucans, which is one of the most important exo-polysaccharides involved in dental biofilms, and hence mediating the firm adherence of S. mutans to the tooth surface 3, 4.

Thus Gtf-I is considered as the fundamental virulence factor of S. mutans 5. Besides this, gtf-D codes for glucosyltrasferase (soluble) [Gtf-S] and gtf-C codes for Gtf-I and Gtf-S enzymes together 3. Gtf-S catalyzes a reaction, of which the end product is soluble glucan, which has the ability to decrease the production of biofilms 6.

Some important mechanisms involved in protection of microbes within biofilms are antibiotic resistance, quorum sensing, latency during inhospitable conditions 7, exo-polysaccharides of the biofilms, altered micro-environment within the biofilm, altered gene expression by organisms within a biofilm etc 8. Most of the available therapeutic agents are directed towards the inhibition of growth of cariogenic organism, but they are usually ineffective due to the biofilms formed. Besides, traditional therapeutic agents that may directly destroy the resident oral microflora and thus suppress even the beneficial aspects of those microbes. Hence application of agents that can affect the activity of Gtf enzymes thereby preventing the production of insoluble glucans seem to be much more appealing for prevention of dental plaque formation. Hence the option of the use of natural therapeutic agents (plant-derived substances, like polyphenols, including extracts of miswak 9, tea tree oil 10, green tea 11, manuka honey 12, etc) is of prime importance.

Among the natural inhibitors, probiotics are comparatively less studied for their beneficial effects on oral health. They are living microorganisms, principally bacteria that are safe for human consumption and when ingested in sufficient quantities, have beneficial effects on human health, beyond basic nutrition as defined by the United Nation’s Food and Agricultural Organization (FAO) and the World Health Organization (WHO) 13, 14. They exhibit various mechanisms of activity in the oral cavity such as – prevention of pathogen adhesion on dentine surfaces, modulation of the oral environmental conditions, production of agents that inhibit the growth of cariogenic organisms, involvement in the substrate metabolism, etc 15, 16. These mechanisms are mainly attributable to the antimicrobial agents reported from lactic acid bacteria (LAB) that principally include organic acids, peptides, hydrogen peroxide, bacteriocins, adhesion inhibitors, etc 17. Considering this, the present study is focused on the evaluation of anti-biofilm activity of LAB and the possible mechanism thereof.

Media, Chemicals and Reagents: Brain Heart Infusion (BHI) agar was used for cultivation and maintenance of S. mutans, whereas, deMan, Rogarosa, Sharpe (MRS) agar was used for the culture and maintenance of all LAB cultures.  A Special Medium was used for the initial growth of S. mutans before the Gtf assay 18. All media were purchased from Himedia, India. Other chemicals and reagents were purchased from Merck, India and are of AR grade.

Culture, Purity testing and Maintenance of bacterial strains: For all experiments S. mutans was cultured in BHI broth aerobically at 37 0C for 48h, while the LAB species were cultured in MRS broth at 37 0C for 24h. The cultures were stored on respective media at 4 0C until use. Sub-culturing of the cultures was done once in two weeks.  In the whole study, each LAB culture (OD600=1) was divided into two parts – (a) a cell free supernatant (CFB), and (b) neutralized (pH 7.0) cell free supernatant (N-CFB). These are prepared fresh, just prior to each experiment and filtered through 0.4μ millipore filter (Himedia, India).

Biofilm formation assay: S. mutans culture was used in the assay for the formation of biofilms as per the method described by Loo et al 19, using BHI with 2mM sucrose. Absorbance was measured at 575nm after 0, 12, 24, 36 and 48h of incubation using ELISA plate reader (BioTek, USA). A negative control of the media alone was set..

Inhibition of biofilm formation: Assay for inhibition of the formation of biofilm was carried out as per the method described by Ahn et al., 20 with certain modifications. The CFB and N-CFB of the LAB cultures were added to 0, 12, 24, 36 and 48h old biofilms of S. mutans individually or in combinations (L. acidophilus and L plantarum, L. plantarum and L. rhamnosus, L. rhamnosus and L. acidophilus or all the three together – in equal proportion). The samples were incubated for 48h after this addition and the absorbance was measured as described above. The LAB samples exhibiting favorable results were chosen to examine their effect on glucan synthesis.

The precipitate was dissolved in 0.2M phosphate buffer (pH 6.0) [crude enzyme solution] and then used for further analysis. To 1ml of this sample 0.1% sucrose was added and the reaction mixture was incubated for 48h at 370C 22. The concentration of polysaccharide formed was estimated using phenol sulphuric acid method 23. A negative control of Staphylococcus aureus was used.

Inhibition of Glucan Synthesis: The LAB samples selected on the basis of the results obtained in anti-biofim activity assay were used to examine their effect on glucan synthesis. The samples were added at concentrations of 5, 10, 20 and 30% (v/v) to the crude enzyme solution and the assay was performed as described previously.

Statistical Analysis: One-way ANOVA and two-way ANOVA were performed on the obtained data to confirm their statistical significance. Multiple comparisons were made at a level of P < 0.05.

Bacterial strains and maintenance: The bacterial cultures were maintained on respective media and incubated for 48h and 24h respectively for S. mutans and LAB species. 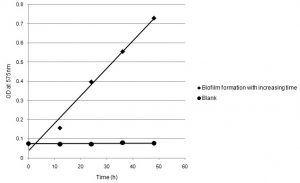 Inhibition of biofilm formation: In order to examine the inhibitory effect of LAB on S. mutans biofilm formation, the CFB and N-CFB of each LAB culture were tested individually and in combination as mentioned earlier. We observed inhibitory property when the CFB of the LAB cultures were added to growing biofilms (P < 0.05; two-way ANOVA). The effect was significant in the case of L. plantarum and L. acidophilus individually and also in combination (P < 0.05; one-way ANOVA) (Fig. 2 and Fig. 3). 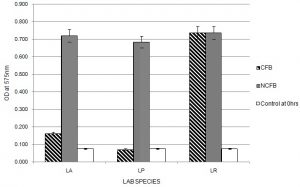 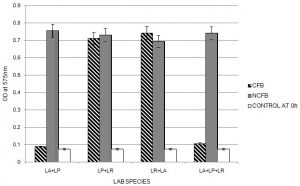 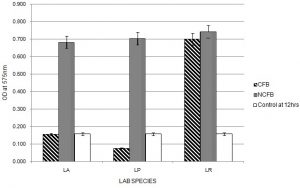 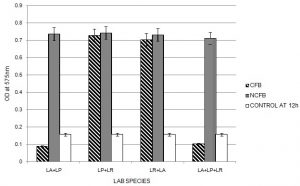 Glucan Synthesis: The amount of insoluble glucan formed was measured using the phenol sulphuric acid method using glucose as standard. The resultant amount of glucan obtained was considered as 100% for further analysis. The inhibitory effect of LAB on glucan synthesis was checked by incubating the crude enzyme solution in the presence of the selected LAB samples. The amount of glucan synthesized was found to decrease with increase in concentration of LAB samples up to 20% (P < 0.05; two-way ANOVA). Maximum reduction (80%) in insoluble glucan synthesized was observed when the CFB of L. plantarum and L. acidophilus were used in combination at a concentration of 20% (v/v). This was followed by 73% reduction in glucan synthesis using CFB of L. plantarum (73%) (Fig.  6). 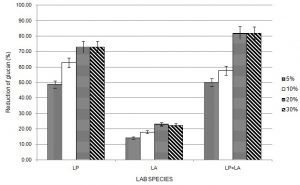 DISCUSSION: Anti-biofilm activity of certain phytochemicals 24 and other bacterial metabolites 25 had been reported against S. mutans. However we came across very few studies on the effect of LAB on the biofilm formation of S. mutans and the pertinent mechanism thereof. Therefore our work focused on this aspect using L. acidophilus, L. plantarum and L. rhamnosus is significant.

Some of the  in vitro studies on  S. mutans include i) antibacterial activity of certain fluoride compounds and herbal toothpastes against S. mutans 26, ii) inhibition of adherence on saliva treated beads using ginkgoneolic acid 27 and probiotic lactobacilli 28,   iii) anti-biofilm activity of L. acidophilus 29. iv) inhibitory effect of L. salivarius on S. mutans in a contact independent manner 30.

We have observed significant anti-biofilm activity of the cell free broth of L. plantarum, followed by L. acidophilus. Absence of inhibitory activity during the use of neutralized CFB indicated acidic pH might be one of the contributory factors for the inhibition of the formation of biofilms and/or for the destruction of the established biofilms. Further studies on other contributory factors are necessary.

It is well known that the exo-polysaccharides produced by S. mutans play a key role in biofilm formation 31. The polysaccharides mainly comprise of insoluble glucans 3, 5 and Gtf-I is identified as the key enzyme for glucan synthesis.

However, to our knowledge correlation between anti-biofilm activity and interference in glucan synthesis owing to its effect on Gtf-I activity is rarely documented in literature. Apigenin, a natural product derived from certain plants, exhibited the ability to reduce the amount of insoluble glucans and enhance the soluble glucan content of the polysaccharide matrix – thus inhibiting the activity of Gtf-I in vitro 6. Our experiments to affirm the role of Gtf-I as a key enzyme for glucan synthesis are in line with the previous reports 18. Effect of LAB individually and/or in combination showed decrease in glucan synthesis up to 80% which may be due to inhibition of Gtf-I activity.

CONCLUSION: From this study it can be concluded that L. plantarum and L. acidophilus are the best probiotic candidates with respect to biofilm inhibitory activity of S. mutans. More studies on Gtf-S enzyme that produces soluble glucans and thus directly decrease the biofilm formation are under way. Further, in vivo studies to evaluate the exact effect of probiotic peptides on the biofilm formation capability of S. mutans and the exo-polysaccharides involved in real-time caries would help to develop a safe product for good oral health.