EFFECT OF LEAD TOXICITY ON DEVELOPING TESTIS OF MICE

EFFECT OF LEAD TOXICITY ON DEVELOPING TESTIS OF MICE

Lead is a ubiquitous environmental and industrial pollutant that may have its toxic effects on the male. The present experimental animal study was designed to observe the changes in the testis due to excessive use of lead. Developmental effects were monitored in the male offspring of Swiss mice from Postnatal Day (PND) 1 till PND 21. Lead acetate reduced the number of pups per litter, percentage of live offspring, and pups weight. Testicular morphology was severely affected in mice exposed to Lead acetate. Therefore, exposure during gestation and lactation adversely affects the reproductive system of male mice. In present study lead toxicity induced histological alterations in the various components of the testis. It is observed in present investigation that lead acetate given in high dose (640mg/kg/days) caused decreased body weight as compared to control males during developing period of pups. The microscopic examination revealed that lead induced apparent damage and reduction in the number of seminiferous tubules and primordial germ cells. Oral exposure of lead acetate changed the arrangement and shape of spermatogonia cells and reduced the number of sertoli cells. It also diminished the development of Leydig cells. We can conclude from our findings that lead acetate adversely affects developing testis of Swiss mice.

INTRODUCTION: During the past 50 years, thousands of metals and chemicals have been released into the general environment 1. Oral exposure of these metals causes severe damage in male reproductive health. In fact, many metals have become essential to various biological processes. Essentiality goes hand-in-hand with intentional accumulation and safe transport, storage and usage mechanisms. Nonetheless, even essential metals will become toxic with increasing exposure. It is often the case that the nonessential toxicant metals mimic essential metals and thereby gain access to and potentially disrupt key cellular functions. Due to the rapid industrialization and overgrowing urbanization, effects of metals on male reproductive system have become major health concern 2, 3. This can also account for bioaccumulation of toxic metals 4, 5. It is undeniable that good quality semen is essential for reproductive success. This quality appears to have been directly affected in recent years. Since 1990s, various authors have reaffirmed the possible significant drop in sperm quality and consequently an increase in male infertility rates 6, 7, 8.

From the findings of the present study, we reviewed that metals have been reported to produce significant toxicity in male reproductive system. Lead can be found in water pipes, insecticides, lining of equipment where corrosion resistance and pliability are required, in petroleum refining, in construction, bullets of gun, x-ray and atomic radiation protection and is a major industrial by-product. The manipulation of lead for these uses has caused lead contamination of air, dust, and soil.

The present experimental study has been undertaken on Swiss mice to investigate the chronic effects of lead acetate on reproductive system which is responsible for male fertility.

MATERIALS AND METHODS: Swiss albino female mice procured from Department of Zoology, Science College MLSU, Udaipur (India) were acclimatized to laboratory condition for 2 weeks before subjected to experimentation. Animals were housed in polyvinyl chloride cages (290 × 320 × 390 mm) and maintained under standard laboratory conditions. The animals had free access to food (mice feed) and water. The maintenance and handling of the animals were done according to the guidelines of the Committee for the Purpose of Control and Supervision of Experimental Animals, Ministry of Environment and Forests, Government of India. The experimental protocols were approved by the Institutional Animal Ethical Committee of the University NO.CS/Res/07/759.

Experimental design: Female and male mice in the ratio of 4:1 were kept in cages and the day on which sperm was detected in the vaginal smear was counted as day 1 of pregnancy. Group I was the control, group II was 16mg/animal (532mg/kg/bw), respectively. Lead acetate was administrated via oral gavaging on every day from GD 10 day to PND 21. Group l mothers were gavaged with equal volume of distilled water. The pups from each of the groups were randomly selected and were sacrificed on PND 7, 14, 21 days. Body weight was monitored on weekly basis for the mothers as well as for the postnatal pups until they were sacrificed.

Observation: Changes in body weight after lead acetate administration at a dose of 16mg/kg body wt' values are mean ± SD (n = 8). All the mice in control group ‘A’ were remained active and healthy with normal feeding behaviour. Their mean body weight (m.bw.) at the end of experiment was 12.16gm as shown in table 1. In group-B mice treated with 16mg Lead acetate were lethargic and more irritable and lost their body weight. Data regarding changes in body weight, at different days of developing period with lead acetate are represented in Table 1 and graphically represented by Fig. 1. Results of the present study indicated dose dependent significant decrease in body weight after administration of lead acetate, as compared to controls.

n=Total numbers of mice used; Mean ± S.D; Students ‘t’ test: *= P<0.05. All significance has been calculated with respect to control group A 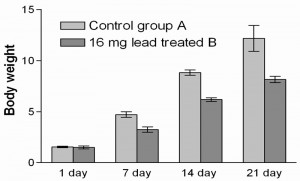 In the present investigation, the histopathological alterations in the testis of Swiss mice caused by lead exposure were observed. In control testis well developed seminiferous tubules and regular distribution of cells was apparent (Fig. 1A). Sertoli cells and spermatogonial cells were located near the basement membrane of the seminiferous epithelium. Spermatogonia arranged in layers with round shape and surrounded by single germ layer besides the sertoli cells. These spermatogonia further differentiate into another type of spermatogonia and intermediate spermatogonia. The precursors of the developing Leydig cells were present in between the seminiferous tubules (Fig. 3B).

Lead altered the regular shape of seminiferous tubules and their arrangements (Fig. 2A). Lead acetate reduced the germ cells and spermatogonia and disarranged their distribution. Spermatogonia which were embedded at the side margins of sertoli cells got detached from these cells and scattered all around and inside the developing seminiferous tubules. At day 7 PND there was distinct lumen visible in the centre of the tubules. But in lead treated testis this lumen was totally obliterated by cell debris (Fig. 4B).

In the control testis of 21 day the seminiferous tubules were arranged in regular manner (Fig. 3C). The spermatogonia and intermediate spermatogonia and primary spermatocytes in various phases of development were observed. These cells were arranged in single and double layers, parallel to the layers of spermatogonia. These undifferentiated cells possessed an ovular round nucleus and single or double nucleoli. Sertoli cells were clearly detected near the seminiferous epithelium.

Sometimes they appeared near the periphery of the tubules. Their cytoplasm was well stained (Fig. 4D). Lead acetate affected the developing seminiferous tubules and changed their shape and size and decreased the size of tubules. The numbers of blood vessels in the seminiferous tubules were reduced by lead acetate.  In treated group the hexagonal shape of tubules and large gaps were detected between tubules than in control (Fig. 3C). Many spermatogonial cells disarranged and sertoli cells became shrinked and the lumen of seminiferous tubules obliterated by cell debris. The precursors of developing Leydig cells dispersed and they were rarely seen in groups (Fig. 4D).

All these alterations were due to toxic effects of lead acetate on the developing testis depending upon dose and duration of the treatment. At the end we concluded that lead acetate affects the developing spermatogonial cells, Leydig cells and sertoli cells. 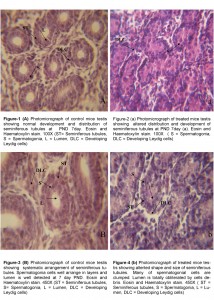 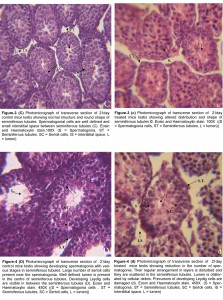 Following 60 days of exposure to 0.1% Pb Ac in drinking water, the histopathological results revealed a degeneration of germinal epithelium with sloughing of germ cells into the lumen of seminiferous tubules, by Yasser Said El-Sayed and Mahmoud Shaban El-Neweshy 13.

Moreover, the interstitial space in adult testis was filled out with overgrowth of Leydig cells. This increase of Leydig and Blood cell was not caused by the reduction of the size of the seminiferous tubules but by enhanced mitotic activity of Leydig cells reported by Kissel et al., 19.

CONCLUSIONS: In conclusion, the present study indicates that lead adversely affects body weight and histological parameters in male reproductive system of Swiss mice. Dose dependent significant decrease in body weight was observed after administration of lead acetate. The findings may be beneficial for those who are regularly and occupationally exposed to lead at their work places.