EFFECT OF MAGNESIUM STEARATE ON MUCOADHESIVE MICROSPHERES OF REPAGLINIDE

EFFECT OF MAGNESIUM STEARATE ON MUCOADHESIVE MICROSPHERES OF REPAGLINIDE

In this study, an attempt was made to prepare Mucoadhesive microspheres of Repaglinide using various Mucoadhesive polymers designed for oral controlled release. Microspheres containing the Mucoadhesive polymer chitosan hydrochloride, with matrix polymer Eudragit RS 100, Repaglinide as a model drug and agglomeration preventing agent magnesium stearate were prepared by the Emulsification solvent evaporation method. The amount of magnesium stearate is varied and the following methods were used for microspheres evaluation: drug content, dissolution determination, scanning electron microscopy and FTIR spectroscopy.  The microspheres were evaluated for surface morphology and particle shape by scanning electron microscope.  The microspheres were also evaluated for their microencapsulation efficiency, in vitro wash-off mucoadhesion test, and in vitro drug release. The microspheres were found to be spherical and free flowing. The microencapsulation efficiency was in the range of 61.44±1.16 to 78.90±1.17and microspheres exhibited good mucoadhesive property in the in vitro wash off test. The drug-polymer concentration of dispersed phase influences the particle size and drug release properties.

INTRODUCTION: Microencapsulation by various polymers and its applications are described in standard textbooks 4, 14. Microspheres are a frequently used drug delivery system and may also possess Mucoadhesive properties. Due to their micrometer size they may applied to mucosa, where the larger size of some other dosage forms, e.g., tablet, would represent a problem 3-6. The most suitable internal structure of microparticles for the adhesion on the mucosa surface is the matrix system with a Mucoadhesive polymer dispersed inside the particle. The objective of this study is to develop, characterize, and evaluate mucoadhesive microspheres of repaglinide employing mucoadhesive polymers for prolonged gastro- intestinal absorption. Repaglinide, an effective antidiabetic that requires controlled release owing to its short biological half-life 13 of 1±2 hours, was used as the core in microencapsulation. The mucoadhesive microspheres were evaluated by in vitro methods for controlled release. Repaglinide, a fast and short-acting meglitinide analog was chosen as the drug candidate since it is indicated for the development of a dosage form with increased GRT (Gastric Residence Time). It has a very short half-life (1 h), low bioavailability (50%) and poor absorption in the upper intestinal tract 13.

Method of Preparation of Formulation: Microspheres were prepared by the solvent evaporation method using the solvents liquid paraffin/acetone. Different amounts of magnesium stearate were added to prevent agglomeration of microspheres. Eudragit RS-100 was first dissolved in acetone and adds chitosan hydrochloride powder. Repaglinide and different amounts of magnesium stearate were dispersed separately in acetone and added to the Eudragit RS-100 and chitosan hydrochloride dispersion. The mixture was emulsified in liquid paraffin. The emulsion was stirred at 1000 rpm, at 400C for 40 min. The emulsion of microspheres was filtered, washed with n-hexane and dried in a vacuum at room temperature overnight.

Formulation Development: Various formulations were developed by changing the ratio of chitosan, Eudragit RS-100, solvent ratio, magnesium stearate and respective coded is given in the table 1.

Estimation of Repaglinide: Repaglinide was estimated by ultraviolet visible (UV/Vis) spectrophotometric method (Shimadzu UV-1700) based on the measurement of absorbance at 242.5 nm in 0.1 N HCl, pH 1.2. The method obeys Beer’s law in the concentration range of 1 to10 µg/ml.

Determination of Drug Entrapment Efficiency: 10 mg of dried microspheres were weighted accurately and drug was extracted from microspheres by digesting for 24 hours in 10 ml of 6.8 pH phosphate buffer solution. During this period the suspension was agitated. After 24 hrs the suspension was centrifuged at 2000 rpm for about 3 minutes. The supernatant obtained was assayed spectrophotometrically for drug contents. The drug entrapment efficiency (DEE) was determined as:

Production Yield: The percentage of production yield was calculated from the weight of dried Microspheres (W1) and the sum of initial dry weight of starting materials (W2) as the following formula: 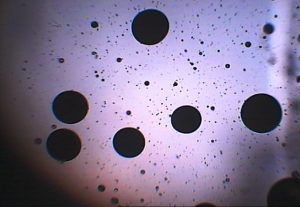 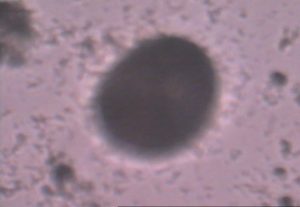 In-vitro drug release: The release rate of Repaglinide from mucoadhesive microspheres was determined using dissolution testing apparatus 2 (paddle type). The dissolution test was performed using 900 mL of 0.1N HCl, at 37± 0.50C and 50 rpm. A sample (10 mL) of the solution was withdrawn from the dissolution apparatus hourly for 24 hrs, and the sample were replaced with fresh dissolution medium to maintain the sick condition. The samples were filtered through a membrane filter and diluted to a suitable concentration with 0.1 N HCl. Absorbance of these solutions was measured at 242nm using a model 1700 Shimadzu, double-beam spectrophotometer. Cumulative percentage drug release was calculated using an equation obtained from a standard curve and same studies were performed in 6.8 pH phosphate buffer solutions. The drug release experiments were conducted in triplicate (n = 3).

In-vitro mucoadhesivity: The mucoadhesive property of microspheres was evaluated by in-vitro wash off test for mucoadhesion. Pieces of intestinal mucosa (3cm×2cm) were mounted onto glass slides using cyanoacrylate glue. About 200 mg of microspheres were spread onto each wet rinsed tissue specimen and immediately thereafter the support was hung onto the arm of USP disintegration apparatus. By operating the disintegration test machine, the tissue specimen was given a regular up and down movement in 0.1 N HCl/ PBS pH 6.8 at 370C taken in a 1 liter vessel of the machine. At the end of 30 minutes, 1 hour and then at hourly intervals, the machine was stopped and the microspheres adhering to the tissue, 0.1 N HCl/PBS was centrifuged dried and weight. The mucoadhesiveness of these microspheres was calculated.

RESULT AND DISCUSSION: Mucoadhesive Microspheres of Repaglinide consisting of chitosan hydrochloride powder in various combinations could be prepared by solvent evaporation of emulsification process. Microspheres with a coat of mucoadhesive polymer alone could not be prepared because of water insoluble nature of the polymers. The purity of drug sample was identified by scanning the drug sample on IR spectrophotometer. The peaks of the IR spectra of drug sample were found to be similar with the standard IR spectra of pure repaglinide as reported. Fig. 3 shows the I.R. spectra of Repaglinide. The I.R. spectra of mixture of drug and polymer indicated no incompatibility between drug and polymers, hence Eudragit RS-100, chitosan hydrochloride were chosen as polymers for further investigations. 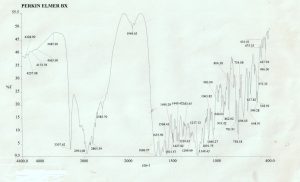 Surface morphology of the mucoadhesive microspheres was examined by scanning electron microscopy. The SEM showed that the microspheres were found roughly spherical and uniform in size. The size ranged from 48µm - 78µm.

Mucoadhesive microspheres of Repaglinide consisting of chitosan as a mucoadhesive polymers exhibited good mucoadhesive properties in the in-vitro wash off test for mucoadhesion. The wash off effect was slow in case of microspheres containing Eudragit RS-100 formulations containing chitosan showed better mucoadhesive properties. The wash off effect was faster at intestinal pH than at gastric pH. The rapid wash off effect observed at intestinal pH was due to ionization of carboxyl and other functional groups in the polymers at this pH which increases their solubility and also reduces adhesive strength. The strong interaction between chitosan microspheres and mucous glycoprotein and/or mucosal surfaces was found to be dependent upon the polymer concentration. As polymer concentration increases, the % mucoadhesion also increased as shown in table 4 & 5. The more amounts of polymer results in higher amounts of free -NH2 -groups, which are responsible for binding with sialic acid groups in mucous membrane and this result in increase the mucoadhesive properties. In group RM5, % mucoadhesion was found to be 61.4% after 4 hours, this formulation showing better mucoadhesive property, which was useful for drug release for longer period of time. 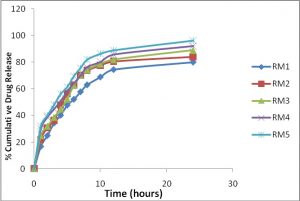 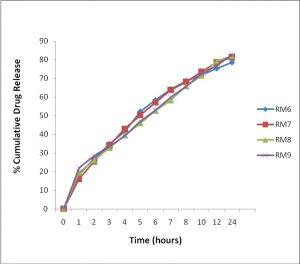 CONCLUSION: The initial drug release significantly increased with an increase in the ratio of drug/polymer. An initial high release is observed due to the dissolution of surface adhered drug, where as the latter drug is due to the diffusion process, which is much slower when, compared to the initial release. Formulation RM5 was found to be the best among all the formulations since it showed good mucoadhesive properties, fair entrapment efficiency and could prolong the release for a longer duration of time.  Bulk density and flow property shows that most of the microspheres having well to excellent flow property. The ratio of drug/polymer also had effect on the release of the microspheres. The in-vivo study demonstrated significant blood glucose reducing activity of mucoadhesive microspheres of repaglinide.

Microspheres of different size and drug content could be obtained by varying the formulation variables like polymer ratio, magnesium stearate ratio and solvent ratio. The multi-unit mucoadhesive repaglinide delivery system is accepted to provide clinician with a new choice of an economical, safe and more bio-available formulation in the management of moderate to severe diabetes mellitus. Therefore it may be concluded that drug loaded mucoadhesive microspheres are suitable delivery system for repaglinide.

ACKNOWLEDGEMENT: We are thankful to Sun Pharma Mumbai for providing generous gift of Repaglinide and Birbal Sahni Institute of Paleobotany, Lucknow for providing Scanning Electron Facility (SEM). We also thank Head and Guide, Institute of Pharmacy, Bundelkhand University, Jhansi for providing Infrastructure facility for the work.