Conclusion: Thus it may be concluded that ketotifen exerts ameliorative effect in diabetic nephropathy possibly by inhibiting degranulation of mast cells and reducing oxidative stress.

INTRODUCTION: Diabetes mellitus is a metabolic disorder of multiple etiologies characterized by chronic hyperglycemia with disturbances of carbohydrate, fat, and protein metabolism resulting from deficiency in insulin or insulin resistance or both 1. Long term hyperglycemia often results in microvascular and macrovascular complications such as nephropathy, retinopathy, neuropathy, peripheral vascular disease and cerebrovascular disease 1. Diabetic nephropathy is a multistage clinical syndrome characterized by thickening of glomerular basement membrane and mesangial expansion with progression into glomerulosclerosis, tubular necrosis and interstitial fibrosis, which ultimately result in renal failure 2, 3, 4. Inflammation followed by degranulation of mast cells has been reported in pathological conditions such as respiration disorders, CNS disorders, CVS disorders. Mast cells are reported to be infiltrated in the inflamed kidney and degranulated during renal diseases 5. The degranulation of mast cells release various pathological mediators like transforming growth factor-β (TGF-β), chymase, tryptase, cathepsin G, histamine and various inflammatory cytokines 6, 7, 8, 9.

These cells have been noted to contribute to renal deterioration by inducing chronic renal injury and glomerular nephritis 10. The detrimental role of renal mast cells has been further confirmed in a recent study in which the mast cell density was noted to be increased significantly in the renal interstitium of diabetic kidney, which is correlated with relative interstitial volume, serum creatinine and urea in patients with diabetic nephropathy 11. Recently, it has been reported that mast cells infiltrate kidney by pathological stimulus, followed by its degranulation and inflammation. Ketotifen is a mast cell stabilizer agent that prevents mast cell degranulation by averting transmembrane influx of calcium ions. Thus, the present study is designed to investigate the effect of Ketotifen, a mast cell stabilizer in diabetic nephropathy.

Animals: Male Wistar rats of body weight, 200 to 250 gm were used in the present study. All animals were maintained in standard 12 hour light/dark cycle with free access to standard rat chow diet and water ad libitum. The animals were housed in metabolic cages. The experimental protocol was approved by Institution animal ethical Committee in accordance to CPCSEA guidelines (Ref No.- ISF/IAEC/17/10).

Collection of Samples: At the end of the experimental protocol (8 weeks after administration of STZ) each rat was individually placed in metabolic cage and its urine was collected for 24 hours. Animals were denied water during the 24 hour period of study. Blood samples from rats were collected from retro-orbital sinus and allowed to clot. The eppendorff tubes were kept at 4ºC for 30 min and centrifuged at 1500 g for 10 min to obtain serum. Further, rats were sacrificed by cervical dislocation and kidney is removed and homogenized.

Induction and assessment of Diabetes Mellitus: Experimental diabetes mellitus was induced in rats by single injection of streptozotocin (STZ) (50 mg/kg i.p.) dissolved in freshly prepared ice cold citrate buffer of pH 4.5. The blood sugar level was monitored after one of administration of STZ and rats with glucose level (>120 mg/dl) were selected and maintained for 7 weeks. The serum glucose concentration was estimated by glucose oxidase peroxidase (GOD-POD) method 17.

Estimation of Serum Creatinine: Alkaline picrate reacts with creatinine to form the orange colored complex and this was assessed at 520nm spectrophoto- metrically. 2.0 ml of picric acid reagent was added to 0.2ml of serum for deproteinization of specimen, which was mixed well and centrifuged at 3000 rpm to obtain a clear supernatant 18.

Estimation of Blood Urea Nitrogen: Urease catalyses the conversion of urea to ammonia and carbon dioxide. Ammonia thus released reacts with a mixture of salicylate, hypochlorite and nitroprusside to yield a blue green colored compound (indophenols).

The intensity of color produced is directly proportional to the concentration of urea in the sample.1000 µl of working reagent-I containing urease reagent, and a mixture of salicylate, hypochlorite and nitroprusside was added to 10µl of serum, 10µl of standard urea (40mg/ml) and 10µl of purified water to prepare test, standard and blank, respectively 19.

Estimation of Protein Urea: When the pyrogallol red-molybdate complex binds to basic amino groups of protein molecules, there is a shift reagent absorbance. The absorbance is directly proportional to protein concentration present in the sample.1000µl of reagent (pyrogallol dye) was added to 10 µl of urine sample, 10µlof standard and blank, respectively 20.

Estimation of Total Renal Collagen Content: Hydroxyproline values was converted to collagen content by multiplying by a factor of 6.94 (as hydroxyproline represents approximately 14.4% of the amino acid composition of collagen) and expressed further as mg collagen per gram of wet tissue 20.

Estimation of Serum Malonaldehyde (MDA) Concentration: MDA concentration was measured by estimating thiobarbituric acid reactive substances (TBARS) (Liu et al., 1995). TBARS ASSAY forms a colored product (absorption maximum, 532nm) which can be measured by spectrophotometric assay. The primary TBARS chromogen is a reaction product of thiobarbituric acid and Malonaldehyde (MDA), which is generated during the analytical procedure from the decomposition of lipid hydroperoxides in the sample. Absorbance was noted spectrophotometrically (DU 640 B Spectrophotometer, Beckman Coulter Inc. CA, USA) at 532 nm against prepared blank solution. A standard curve using 1, 1, 3, 3-tetraethoxypropane was plotted to calculate the concentration of TBARS 21.

Reduced Glutathione: The concentration of endogenous reduced glutathione (GSH) level was estimated following the method described by Ellaman 22. In this method, 0.2 mL of supernatant was mixed with Tris buffer with EDTA. Then DTNB was added to mixture and absorbance was noted at 412 nm ((DU 640 B Spectrophotometer, Beckman Coulter Inc. CA, USA)

Histopathology Studies: The kidney was excised and immediately immersed in 10% formalin. The kidney was dehydrated in graded concentrations of alcohol, immersed in xylene and then embedded in paraffin. From the paraffin blocks, sections of 5μm in thickness were made and stained with hematoxylin and eosin 10.

Toluidine Blue Staining for Mast Cells: The hydrated sections were treated with 0.05% aqueous solution of toluidine blue for 30min. The slides were washed with water and counterstained with 0.01% aqueous solution of eosin for 1 min. Again washing was done with water to remove excess of eosin followed by washing with absolute alcohol to dehydrate the sections and sections were mounted on balsam as mounting agent. Mast cell density was quantified by counting number of toluidine blue positive mast cells per field at 100 fold magnification. At least 15 fields were included from each slide for counting and the mean mast cell density was calculated 11.

Statistical Analysis: All values were expressed as mean ± S.D. Data was statistically analyzed using one way ANOVA followed by Tukey's multiple comparison tests. The p value of less than 0.05 was considered to be statistically significant.

Effect of Ketotifen and Lisinopril on Serum Glucose Level: The marked increase in serum glucose level was noted in diabetic and compound 48/80 administered rats as compared to normal rats. Treatment with ketotifen (1mg/kg/day) and lisinopril (1mg/kg, p.o.) for 7 weeks did not produce any marked effect on serum glucose level in normal rats (Table 1).

Effect of Pharmacological Interventions on Proteinuria: The marked elevation in proteinuria was noted in diabetic and compound 48/80 administered diabetic rats as compared to normal one. Treatment with Ketotifen (1mg/kg/day) and lisinopril (1mg/kg, p.o.) partially but significantly reduced the incidence of proteinuria in diabetic rats however treatment with lisinopril (1mg/kg, p.o.) markedly reduced the diabetes -induced elevation in proteinuria (Table 1).

TABLE 1: EFFECT OF KETOTIFEN, LISINOPRIL AND COMPOUND 48/80 ON VARIOUS PARAMETERS IN RATS 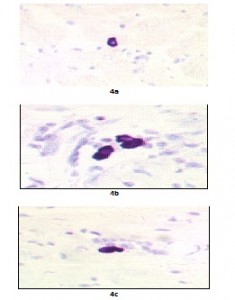 DISCUSSION: In the present study diabetes mellitus was induced by administrating streptozotocin (STZ). STZ causes partial degeneration of pancreatic beta cells that leads to decrease in insulin secretion and hence diabetes mellitus. It was confirmed in our study by assessing serum glucose concentration (>120mg/dl). Diabetes has been reported to cause progressive vascular dysfunction that leads to nephropathy in 7-8 weeks in rats.  Serum Creatinine, blood urea nitrogen, proteinuria and oxidative stress have been documented to be an index of renal dysfunction in nephropathy 14.

The elevated levels of serum creatinine, blood urea nitrogen & proteinuria in diabetic rats noted in present study after 7 weeks of diabetes shows that rats have developed nephropathy. Moreover, the diabetic rats also showed marked renal structural changes with increased collagen content and tubular injury. Hyperglycemia has been reported to produce detrimental changes in kidneys and oxidative stress plays prominent role. The increase in lipid peroxidation and decrease in GSH have been documented to be an index of oxidative stress 15. The lipid peroxidation assessed in terms of measuring TBARS has been noted to increased, which was accompanied with consequent decreased in Reduced GSH in diabetic rats with nephropathy.

Moreover, hyperglycemia also causes degranulation of mast cells that releases inflammatory mediators such as histamine, cytokines (IL-1, IL-2, IL-6 and TNF-α and TGF-β, that augment the reactive oxygen species production and inflammation. The tubular injury and glomerular inflammation was observed by Hematoxylin eosin staining and infiltration of mast cells was assessed by toluidine blue staining that shows increase in mast cells followed by inflammation and pathological changes in diabetic kidneys.

Lisinopril is employed as a standard drug, as lisinopril is a well reported inhibitor of angiotensin converting enzyme (ACE). Moreover lisinopril is used clinically as a protective agent for chronic conditions of renal diseases and dysfunction .In the experimental model used lisinopril has shown significant improvement in parameters employed. Ketotifen was employed as a mast cell stabilizer, as ketotifen is a orally active agent in comparison to sodium chromoglycate  that is another mast cell stabilizer but not orally active. Ketotifen causes the inhibition of calcium influx that leads to stabilization of mast cells and prevents there degranulation. Administration of ketotifen has shown significant improvement in the renal function assessed in terms of renal collagen content, urinary protein, creatinine clearance and blood urea nitrogen furthermore ketotifen also decreased the renal lipid peroxidation, increased antioxidant enzyme reduced glutathione in renal tissue and improve the integrity of kidney.

Furthermore, to confirm the involvement of mast cells, specific and well reported mast cell degranulator compound 48/80 has been employed. Compound 48/80 (1.5mg/kg) has been reported to degranulate the mast cell in normal rats administered continuously for three days. Thus, in the present study compound 48/80 has been administered in the diabetic rats for 3 days and the above said parameters are assessed after 8 weeks. Compound 48/80 significantly increased renal dysfunction (serum creatinine, collagen content, TBARS level) in comparison to diabetic group that further confirms the involvement of mast cells in diabetic nephropathy.

Another important  fact is the infiltration of mast cells can be detected by toluidine blue staining however degranulated mast are not identified that may be the possible reason that less mast cell density are observed in compound 48/80 treated diabetic rats. Thus, it may be concluded that mast cells are involved in diabetic nephropathy and ketotifen ameliorates the condition, possibly by stabilization of mast cells and thus, mast cell stabilizers may be implicated in therapeutics of pathological conditions associated with diabetic nephropathy.