Categories Menu
Home » EFFECT OF MEDICINAL PLANT EXTRACTS ON THE ANTIMICROBIAL ACTIVITY OF AMOXYCLAVE AND ERYTHROMYCIN AGAINST E. COLI AND S. AUREUS

EFFECT OF MEDICINAL PLANT EXTRACTS ON THE ANTIMICROBIAL ACTIVITY OF AMOXYCLAVE AND ERYTHROMYCIN AGAINST E. COLI AND S. AUREUS

EFFECT OF MEDICINAL PLANT EXTRACTS ON THE ANTIMICROBIAL ACTIVITY OF AMOXYCLAVE AND ERYTHROMYCIN AGAINST E. COLI AND S. AUREUS

INTRODUCTION: The use of antibiotics for the treatment of infectious diseases was the first choice since the discovery of Penicillin by Alexander Fleming in 1928, but still infectious diseases have remained a major cause of death in the history of mankind.

Infectious diseases like cholera, tuberculosis, influenza, cryptosporidiosis, hepatitis, HIV/AIDS, meningitis is caused by bacteria, fungi and viruses that account for almost 1/3 of all the deaths in the World 1.

Meanwhile, the extensive use of antibiotics in healthcare has led to the co-evolutionary emergence of dangerous pathogens that are resistant to traditional antibiotics, as well as the re-emergence of some old infectious diseases. One of the major breakthroughs was the discovery of methicillin-resistant Staphylococcus aureus (MRSA) and became a problem for nosocomial infections in 1990. The other observation was vancomycin-resistant S. aureus (VRSA). The resistance of Psuedomonas aeruginosa to many antimicrobial agents such as carbapenems, quinolones and aminoglycosides, is the topic of worry nowdays 2. Therefore, increased antimicrobial resistance in pathogens has led scientists to think for other alternatives.

Since, medicinal plants have been used in many forms over the years to treat, manage or control infections 3 for centuries and their use in combination with drugs has led new scope. It has been observed that secondary metabolites of medicinal plants such as alkaloids, essential oils, fatty oils, resins, mucilages, tannins, gums etc. possess the antimicrobial activity 4. For example, Taxol, derived from the bark of Taxus brevifolia, has been used to cure cancer of various types 5. Picroliv, isolated from rhizome of Picrorhiza kurroa, showed hepatoprotective activity 6 and phenol glycoside androsin isolated from this plant was observed to be antiasthmatic 7. But in contrasts to them, the combination of active biomolecules with known antimicrobial agents has proven to be beneficial. The compound (piperine) isolated from P. nigrum, in combination with rifampicin and isoniazid showed synergistic effect against M. tuberculosis, the new drug formulation against tuberculosis named as ‘resorine’ which contains reduced dose (200mg) of rifampicin + isoniazid (300mg) + piperine (10mg) 8.

However, the mechanism of plant extracts to potentiate antibiotics is not understood yet. In addition, the chemical diversity in plants with potential in improving the clinical efficacy of antibiotics still remains largely un-investigated. Thus, the aim of present study is to explore the medicinal plant diversity of Himachal Pradesh to potentiate the antimicrobial activity of traditional antibiotics, against resistant microbes. The screening of 71 medicinal plants of this region was performed to get best synergistic combinations with erythromycin and amoxyclave against S. aureus and E. coli.

Microbial strains: The strain of Escherichia coli (MTCC-739) was procured from Institute of Microbial Technology (IMTECH), Chandigarh. Erythromycin resistant strain of Staphylococcus aureus (ATCC-43300) was obtained from Post Graduate Institute of Medical Education and Research (PGIMER), Chandigarh and stored on nutrient agar plates and slants at 4°C. Bacterial strains were grown for 12 h in nutrient broth (NB) for 12 h at 37° C and 250 rpm. Muller Hinton (MH) agar medium 9 was used to study the antimicrobial activity by agar well diffusion assay 10 by incubating assay plates at 37°C for 14 h. The concentration of agar was 0.7 % for soft agar and 2% for hard agar. The culture media used in this study were purchased from HiMedia Labs, India. Erythromycin powder was purchased from MP Biomedicals, Inc. USA. Erythromycin (15 µg) and Amoxyclave (30 µg) discs (HiMedia Labs, India) were used as positive control.

Collection of Plant Material and extracts preparation: The plant material used in this study was collected during September- December, 2012 from Solan (altitude 1350 m, temp 20-30°C, humidity 55-68%) and Shimla (altitude 2202 m, temp 12-25°C, humidity 62-80%) district of Himachal Pradesh. The identity of medicinal plants was verified from the herbarium of Dr Y.S Parmar University of Horticulture and Forestry, Nauni, Himachal Pradesh. Plants and their parts used in the study are listed in the Table 1. The collected plant material was thoroughly washed under the running tap water, followed by surface sterilization with 1% H2O2 and then washed with autoclaved distilled water. The surface sterilized plant material were dried in oven at 40° C for 5 days or until they were dried completely. Dried plant material was ground in mixer grinder to make fine powder. The fine powder (5g) was extracted in Soxhlet apparatus 11 using ethanol as solvent. The extracts were evaporated in rota- evaporator at 40° C. The dried extract was stored at -20° C refrigerator until further use. Antimicrobial assay was performed by dissolving the dried extract in ethanol to a final concentration of 1mg/ml prior to use.

Antimicrobial assay: Antimicrobial activity was measured by using agar well diffusion method method 10. Antibacterial activity was tested against drug resistant S. aureus and E. coli. Inoculums of each bacterium i.e. 2× 108 cells (measuring the A600 = 1) were mixed with the 0.7 % Muller Hinton agar (soft agar), which was overlaid on the 2% M.H agar (hard agar). The wells were punched with the cork borer (8 mm) in the soft agar and the plant extract each of 40 µg was loaded in the wells. After the incubation of 12 h at 37º C, the zone of inhibition was measured. In the case of disc diffusion assay, discs of Whatman filter no.1 were punched and autoclaved filter discs were loaded with the extracts and placed in the wells.

To assay the bactericidal or bacteriostatic activity of extracts/ antibiotics, cells were carefully taken from the zone of clearance around the well and streaked on nutrient agar plates and observed for the growth after 24 h of incubation at 37°C. Appearance of growth was considered as bacteriostatic, whereas no growth was considered as bactericidal effect.

Analysis of phytochemicals and their derivatives by biophysical techniques: 50 mg of methanolic leaf extract of C. oppositifolia was re- suspended in 5 ml luke warm water to make suspension. The mixture was transferred into a separating funnel. 100 ml chloroform was added to the separating funnel, followed by gentle shaking and chloroform fraction was collected. Same procedure of fractionation was repeated for n-butanol and ethyl acetate solvents to obtain fractions of different polarity.

RESULTS: The selected 72 medicinal plants (Table 1) were studied for the antimicrobial activity or synergistic effect either in the combination with erythromycin or amoxyclave. The dried powders of plant extracts were suspended in ethanol in the ratio of 1 mg/ml and 40 µl of the plant extract was loaded for antimicrobial activity against S. aureus and E. coli. Where, erythromycin (50 µg) was used as positive control. The synergistic effect was studied by the combination of 40 µg of plant extract and 50 µg of erythromycin. After the incubation of 12 h, zone of inhibition was measured (mm). In which erythromycin (50 µg) showed bacteriostatic effect against S. aureus and E. coli. From the list of 73 medicinal plants (Table 1), 17 plants were categorized under three classes of synergism as; 1) Class I- increased zone of inhibition; 2) Class II- zone of inhibition same but making drug bactericidal; 3) Class III- zone of inhibition was decreased in combination, but making drug bactericidal (Table 2).

Nd- no zone of inhibition detected, Bc- bactericidal, Bs- bacteriostatic

Minus (-) indicates absence and plus (+) indicates presence of synergistic activity 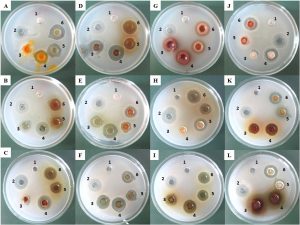 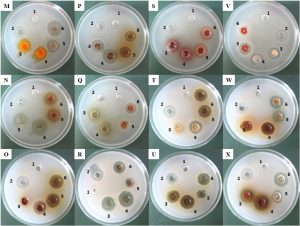 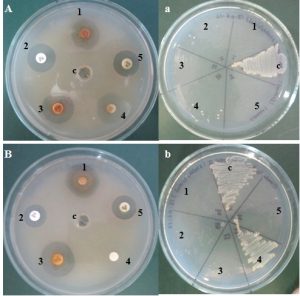 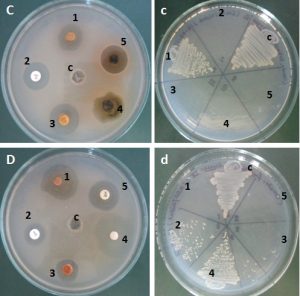 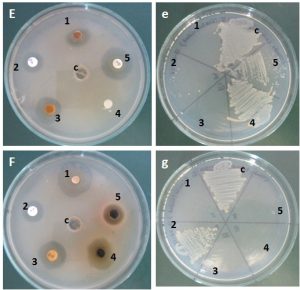 activity against E. coli. Class II synergism was shown by n- butanol and ethyl acetate fraction, in which both of these fractions enhances the toxicity of erythromycin by making it bactericidal against both the tested pathogens (Tables 4 and 5).

DISCUSSION: The mode of action of antibiotics comprise of inhibiton of crucial life sustaining processes in the organism i.e synthesis of cell wall material, DNA, RNA, ribosomes and proteins. Herbal medicine and plant-derived therapeutic products in various forms have been available since years for the treatment of diseases in both Eastern and Western cultures. Herbs have been used in under traditional systems of medicine like Ayurveda, Sidha and Unani. In the traditional background of medicine, India needs to increase its share in the world market 12.

In the modern era the treatment of diseases have been done by different medicinal plant formulations alone and in combination therapy with antibiotics or other plant formulations. The main idea of development of this combination therapy is to formulate less toxic drug with low dosage, classified as synergism. Ethanolic leaf extract of Vangueria spinosa in combination with doxycycline and ofloxacin was reported as synergist against S. aureus, E. coli, K. pneumonia and P. aeruginosa 13. The extracts of Psidium guajava, Rosmarinus officinalis, Salvia fruticosa, Majorana syriaca, Ocimum basilucum, Syzygium aromaticum, Laurus nobilis and Rosa damascena were observed to be enhancing the activity of antimicrobial agents of different mechanisms 14. Betoni et al (2006) 15 observed synergism in Rhus coriaria, Psidium guajava, Lawsonia inermis, and Sacropoterium spinosum with oxytetracyclin HCl, enrofloxacin, gentamicin sulphate and sulphadimethoxin against Staphylococcus aureus. Some formulations are based upon the complete herbal combinations 16.

The synergistic effect of traditional medicinal plants of Solan and Shimla were discussed in combination with erythromycin, amoxyclave against S. aureus and E. coli. The best synergistic plants of current study are listed in Table 2. C. citrates (oil) and Z. officinale (rhizome) has shown class I synergism against S. aureus and E. coli with erythromycin. The class I synergistic effect was observed by S. aromaticum (flower bud) against E. coli, whereas against S. aureus the class II synergism was observed. C. citrates, S. aromaticum and Z. officinale has been reported earlier as synergist for various antimicrobial drugs 15, 17.

T. cordifolia (stem) has shown the class I synergism against S. aureus and E. coli, whereas in A. marmelos (fruit) was observed class I synergist against S. aureus. But to the best of our knowledge, no synergistic activity of A. marmelos is reported in literature, whereas the synergistic effect of leaf extracts of Tinospora cordifolia with nalidixic acid was observed against K. pneumoniae and B. cereus 18. The class I synergism was shown by flower extract of P. granatum against E. coli and S. aureus in combination with erythromycin. The compound extracted from Punica granatum in combination with fluconazole showed a synergistic interaction against Candida albicansandCandida parapsilosis 19. Also synergistic interaction between Punica granatum extract and antibiotics (chloramphenicol, gentamicin, ampicillin, tetracycline and oxacillin) against 30 clinical isolates of methicillin-resistant and sensitive Staphylococcus aureus was reported by Braga et al. (2005) 20. In present study the class I synergistic activity was also observed in C. longa (rhizome) against S. aureus and E. coli. In previous study C. longa (rhizome) was reported synergistic to clotrimoxazole, ampicillin,  cloxacillin, chloramphenicol 21.

In contrast to our observations, there are earlier reports which supports our observation e.g. in T. arjuna (bark), we observed class III synergism against S. aureus and has been reported by Pathania et al. (2013). A. cepa (bulb), M. fragrans (fruit) and C. tamala (bark) have shown the class I synergism against S. aureus and E. coli. The synergistic effect of A. cepa (oil) with ketoconazole against Trichophyton species have been studied by Pyun and Shin, (2006) 22.

The synergistic effect observed in present study may be due to complex formation of phytocompounds/ extracts with antibiotics which leads to the more effective for particular species of microorganisms by inhibiting the crucial life sustaining processes and causing its lyses or death. Synergistic study in herbal medicine may lead to improved traditional formulations. It would the challenge to formulate new improved drugs with globally demanded drugs of Indian medicinal plants so that India can lead the world market of herbal drugs.