ABSTRACT: The present work was planned to study the effect of methyl parathion an organophosphate compound (OP) on biochemical contents of fresh water cat fish Heteropneustis fossilis. The exposure of fish to the sub-lethal concentrations of the toxicant methyl parathion was investigated and the variations were observed in biochemical contents in different tissues of the fish i.e. gill, liver, intestine, muscle and brain. The quantitative variations were observed in proteins, carbohydrates and ninhydrine positive substances at different time intervals i.e. 24, 48, 72 and 96 h. The results revealed that the components of proteins, carbohydrates and ninhydrine positive substances were found to be decreased significantly at different time intervals of methyl parathion exposure to different tissues of fish compared to control. The maximum decrease in proteins followed by ninhydrine positive substances (free amino acids) and carbohydrates was observed at 72 h and 96 h compared to 24 h and 48 h in different tissues of the fish H. fossils. Thus, our present investigation reports that the changes observed were depending on period of exposure of fish to the concentration of methyl parathion.

INTRODUCTION: Pesticides are used worldwide in aquaculture and agriculture to control the insects, pests and other vectors 1, which ultimately find their way into aquatic habitats like rivers, lakes and ponds. The environmental quality is determined by the assessing to toxicity of different chemicals to fish and other aquatic organisms. They ultimately enter the organisms through food webs and also through contact in water 2, 3. Most of the chemicals used as pesticides are acutely toxic to many non-target organisms such as invertebrates, birds, mammals and fishes especially those inhibiting the marine environment 4, 5, 6.

Some of the pesticides have been reported to persists the environment and tend to bio-accumulation in organisms 7. It has been reported that pesticides can be actively toxic to fish 8, 9, 10, 11, 12, 13, 14. Pesticide toxicity to fish has been investigated in several studies 15, 16. Usage of pesticides in the ecosystem leads to development of various types of morphological, physiological, biochemical and behavioral changes in individual 17.

Hence it is necessary to study the immediate effect of pesticides on fish which forms a part of human diet. Among these pesticides, organophosphate compounds (OP’s) are commonly used insecticides, which maintain less toxicity, persistence and also rapid biodegradability in the environment 18. Methyl Parathion (0, 0 -di methyl-0-4 nitro phenyl phosphoro thioate)-Bayer (Germany) is a synthetic Organophosporous pesticide, known to be toxic to fish 19 and insects 20 and applied abundantly in agriculture 21.

Fishes are very sensitive to a variety of toxicants in water, which uptake and accumulate many toxicants such as pesticides 22, 23. However pesticide exposure causes severe alternations in the tissue biochemistry of fishes. In general the toxic effects will be more when two (or) more toxicants act together in a synergistic manner 24, 25, 26, 27, 28. The present study has been carried out to investigate the effect of methyl parathion (an Organophosphate) on biochemical contents of fresh water cat fish Heteropneustes fossilis (Bloch).

The fresh water fish H. fossilis (ranging in weight 70 to 100 gm and in length 25 cm to 35 cm) were brought from local fresh water tanks located within the radius of 15 km from the Kakatiya University, Warangal, Telangana State, India to the laboratory in well aerated polythene bag and acclimatized to the ambient room temperature (28 ± 2 ºC) in large plastic containers. During the period of acclimatization they were fed with oil cake mixed with rice flour. The period of acclimatization lasted for 15 days.

At the end of each exposure period, fishes were scarified and the tissues such as gill, liver, intestine, muscle and brain were dissected out and stored on ice-jacketed container for biochemical studies. The tissues were weighed to the nearest milligram and processed for further analysis.

The tissues were homogenized (10%) in 10% Tri Chloro Acetic Acid (TCA) centrifuged at 2000 rpm for 15 min and clear supernatant and sediment was used for the analysis of total proteins, carbohydrates and ninhydrine positive substances (FAA). The protein sediment and supernatant (TCA precipitated and soluble proteins) was dissolved in 1N NaOH and protein content was determined through the method 30 described by Schacterle and Pollack (1973) 31. Ninhydrine positive substances were estimated by the method of Lee and Takahashi (1966) 32 and the total carbohydrate content in the tissues were estimated by the method of Carroll et al., (1956) 33.

Statistical Analysis: Statistical analysis was performed by one-way analysis of variance ANOVA to compare the results between the tissue components.

RESULTS: The results obtained from the quantitative estimates on the effect of Methyl parathion on biochemical contents of various tissues of fresh water cat fish H. fossilis are presented in Table 1, 2, 3, 4 and Fig. 1, 2, 3, 4 respectively. In this study when the fish tissues i.e. gill, liver, intestine, muscle and brain after treatment with different concentrations of the test chemical methyl parathion at different time intervals a drastic reduction was observed total biochemical content of different tissues of H. fossilis compared to control. The results presented shows that the protein content was significantly decreased in the gill of fish exposed to methyl parathion (Table 1, 2 and Fig. 1, 2). 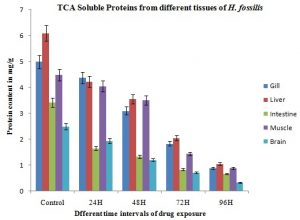 FIG. 1: TCA SOLUBLE PROTEINS IN VARIOUS TISSUES OF H. FOSSILIS AND THE VALUES ARE EXPRESSED AS MEAN ± SE mg/gm OF WET WEIGHT OF TISSUE 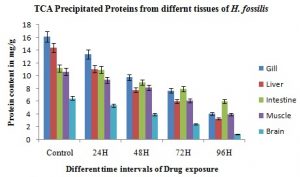 FIG. 2: TCA PRECIPITATED PROTEINS IN VARIOUS TISSUES OF H. FOSSILIS AND THE VALUES ARE EXPRESSED AS MEAN ± SE mg/gm OF WET WEIGHT OF TISSUE

It was observed that the TCA soluble proteins were decreased and is more pronounced in the gill at 48, 72, 96 h exposure gill, liver, intestine, muscle and brain estimated greater reduction in TCA soluble proteins (Table 1 and Fig. 1). Whereas in TCA precipitated protein contents were significantly decreased at 24, 48, 72 and 96 h of exposure of methyl parathion (Table 2 and Fig. 2). 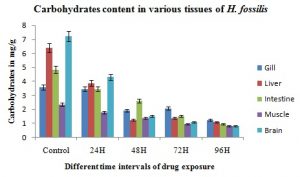 FIG. 3: CARBOHYDRATE CONTENT IN VARIOUS TISSUES OF H. FOSSILIS AND THE VALUES ARE EXPRESSED AS MEAN ± SE mg/gm OF WET WEIGHT OF TISSUE 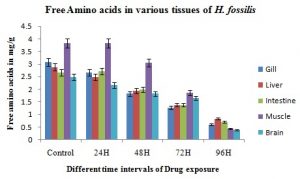 FIG. 4: NINHYDRINE POSITIVE SUBSTANCES IN VARIOUS TISSUES OF H. FOSSILIS AND THE VALUES ARE EXPRESSED AS MEAN ± SE mg/gm OF WET WEIGHT OF TISSUE

DISCUSSION: Organophosphates are non-persistent in nature and their degradation is rapid 34. These are short lived and highly toxic when compared to a number of other pesticides for example organophosphate pesticide is found to be more toxic to fish than organochlorine 35, 36, 37. Therefore, organophosphates can affect the organisms exposed even for a very short period.

The degree of toxicity produced by the poisonous substances is dose dependent upon environmental conditions such as temperature, pH, O2 concentration and presence of residual molecules 38. Due to Methyl parathion in toxification, the normal functioning of cells with the resultant alterations in the fundamental biochemical mechanisms in test fish was noticed. Similar results were also noticed in freshwater Labeo rohita upon chronic exposure to the pesticide methyl parathion 39. In our present investigation, the effect of methyl parathion on biochemical constituents of fresh water fish H. fossilis showed a considerable variation in different tissues of fish H. fossilis 40. Findings were correlated on pesticide treated mollusks.

In the present study methyl parathion caused reduction in the total structural and soluble protein content in various tissues of H. fossilis i.e., gill, liver, intestine, and muscle brain were found to be declined during the exposure period of 24, 48, 72 and 96 h. The studies on Methyl parathion toxicity cause metabolic dysfunction in fish 41, 42, 43. Carbohydrates are less sensitive as compared to proteins towards the OP compounds. The results of the present findings showed a significant decrease in carbohydrate content in all the tissues.

CONCLUSION: From the present study it is concluded that the Methyl parathion exposure has a strong potential to alter the biochemical constituents in various tissues of H. fossilis. Further research has to be focused to evaluate the effect of alternative pesticides and related chemicals to reduce the adverse effects on physiological and biochemical aspects of fish. Therefore, the use of pesticides in the field may be a threat to a human, fauna and flora of the environment.

ACKNOWLEDGEMENT: The author expresses their deep gratitude to the Head of the Department of Zoology, Kakatiya University for providing logistic Support.

CONFLICT OF INTEREST: The authors declare that there is no conflict of interest that would prejudice the impartiality of this scientific work.