ABSTRACT:  Over production of oxygen free radicals, which is mainly mediated by super oxide, occurs in human atherosclerosis. Metoprolol and atorvastatin are the drugs which found to be more prescribed drugs for cardiovascular patients. In the present study, an attempt has been made to evaluate the levels of serum Glutathione, Total anti-oxidant status, lipid peroxidation (malondialdehide) and liver function parameters like serum glutamate oxaloacetate transaminase and serum glutamate pyruvate transaminase. Total 68 subjects were selected for study. Out of 68 subjects 26 were normal healthy volunteers and 42 subjects were patients who are untreated with cardiovascular diseases. The patients both male and female within the age group of 20-70 years were selected. Glutathione, total anti oxidant status, lipid peroxidation, serum glutamate oxaloacetate transaminase and serum glutamate pyruvate transaminase levels in plasma were estimated by using reported methods. Individual methods were standardized first and standard graphs were plotted and the parameters were measured significantly decreased values of glutathione, total anti oxidant status and malondialdehide were observed (p<0.001) in untreated cardiovascular patients as compared with normal healthy volunteers. After therapy there was significant (p<0.001) increase in the glutathione, total oxidant status and malondialdehide as compared with untreated patients. The results indicate that further extensive studies are required to understand the molecular level mechanism of atorvastatin and metoprolol in oxidative stress in cardiovascular patients.

High blood pressure (BP) is an important public health problem in India 1. Production of reactive oxygen species is a particularly destructive aspect of oxidative stress. Such species include free radicals and peroxides 2. Oxidative stress is mediated by Reactive Oxygen Species (ROS) and Reactive Nitrogen Species (RNS) is a primary or secondary cause of many chronic diseases including hypertension. Over production of oxygen free radicals, which is mainly mediated by super oxide, occurs in human cardiovascular diseases 3. The reaction product between super oxide and NO, peroxynitrite, constitutes a strong oxidant molecule, which is able to oxidize proteins, lipids and nucleic acids, causing cell damage, these pathological process are associated with cardiovascular because they contribute to the narrowing of arterial lumen, consequently to increase peripheral resistance and increase blood pressure (BP), in addition to mitochondrial sources of ROS, superoxide can be derived from xanthine oxidase, NADPH oxidase, cyclooxygenase, lipooxygenases and uncoupled NOS(Nitrous Oxide Systems) 4. Superoxide levels are controlled through endogenous antioxidant systems. Superoxide dismutase is the primary antioxidant in the vascular system 5, which is often associated with endothelial dysfunction and hypertension.

Metoprolol (100 mg once daily) is comparatively long-acting members of cardio selective beta blockers. Following oral administration peak plasma concentration of metoprolol are reached within 10 hours 6. The extent of absorption is at least 40-50%, not influenced by the presence of food in the GIT. Atorvastatin is a 3‐hydroxy‐3‐methylglutaryl (HMG) coenzyme A (CoA) reductase inhibitor that efficiently and dose‐dependently lowers both cholesterol 7 and triglyceride levels in hyperlipidemic patients.

The above facts are saying that the oxidative stress parameters like GSH, TAS and MDA plays very important role in the pathophysiology of the cardiovascular diseases. By considering the facts, we have studied the status of the oxidative stress in hypertensive patients before and after treatment compare to the normal healthy persons.

The present study was carried out in the Department of Pharmacology, University College of Pharmaceutical Sciences (UCPSc), Kakatiya University; Mahatma Gandhi Memorial (MGM) hospital, Warangal (AP, India), in the year 2013.

Male patients with normal blood sugar levels, patients with only cardiovascular disease without any prior drug therapy. Twenty six healthy volunteers having no history of smoking, alcoholism, any type of diseases were considered as controls. The subjects having age less than 20 years and above 70 years, secondary diabetic patients and patients suffering from renal disease were excluded from the study. The patients were treated with either atorvastatin 40 mg or metoprolol 100mg for at least 10 days.

After 10 days of treatment by taking the prior consent, venous blood was collected from the subjects under aseptic condition by venipuncture using 5 ml sterile disposable syringe and needle. About 3-4 ml of blood was collected. Serum was separated by centrifugation at 3000 rpm for 10 min at room temperature. The samples were stored at -20°C before analysis and all the samples were analyzed on the same day of collection (Naidu et al)

Blood Pressure (BP): The patient should be sitting or lying at ease. Both the systolic and diastolic blood pressure was measured by using the digital B.P apparatus which is purchased from Omron, USA.

SGOT and SGPT: Both SGOT and SGPT in human serum or plasma are usually assayed by Xing JH et al 13 colorimetric method.

Statistical analysis: Each group comprised of 21 hypertensives (n = 21). All the values were expressed as Mean±SD. The data was analyzed using ANOVA followed by Student Newman Kuel method. In tests, the criteria for statistical significance was *p<0.05, **p<0.01 and ***p<0.001.

Demographic parameters like Age, weight, height, were not significantly different among the three groups (Table 1).

Blood pressure: The mean±SD levels of BP are shown in Table 2, significant decrease in BP is observed in metoprolol group as compared to pretreatment values. Metoprolol (p<0.01) reduced BP more effectively (p<0.05). It was observed that the both drug treatment groups having the BP values higher than the NHVs/control group.

TABLE: 2 EFFECT OF METOPROLOL ON THE BLOOD PRESSURE OF HYPERTENSIVE PATIENTS

Glutathione: The mean±SD levels of glutathione expressed as μM are shown in Fig. 1. GSH levels were significantly increased in both Metoprolol (p<0.001) and atorvastatin (p<0.05) treatment 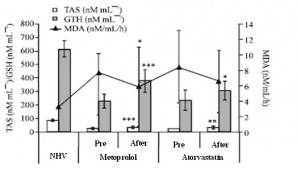 FIG. 1: EFFECT OF METOPROLOL AND ATORVASTATIN ON THE OXIDATIVE STRESS PARAMETERS OF  CARDIOVASCULAR PATIENTS.

SGOT and SGPT: No significant changes in SGOT and SGPT were observed in both metoprolol and atorvastatin group as compared with control group (Table 3).

TABLE: 3 EFFECT OF METOPROLOL AND ATORVASTATIN ON THE SGOT AND SGPT OF CARDIOVASCULAR PATIENTS

High blood pressure (BP) is one of the important public health problems in India and worldwide 1. Oxidative stress mediated by free radicals ROS, RNS is a primary or secondary cause of many chronic diseases 15, heart failure, stroke, coronary heart disease along with consequences and the impairment of renal function . The serious complications are not only the consequences of increased blood pressure but are also related to the arterial endothelial dysfunction, abnormal endothelial dysfunction and accelerate the process of cardiovascular.

The results of the present study showing that the systolic BP levels were significantly higher (Table 2) in hypertensive patients without Antihypertensive treatment compared with healthy subjects. Metoprolol significantly reduced SBP due to its antioxidant property and dual mode of action by release of NO.

Diastolic BP is controlled by the peripheral resistance. In the overall population mean DBP increases progressively throughout adult life in men and women. Throughout the adult life men have a slightly higher mean DBP than women.

Antioxidants decrease the incidence of diseases however more human studies are required to establish the efficacy and safety of these agents in various chronic or acute oxidative stress-related diseases 16 e.g., cardiovascular diseases (CVDs). The role of antioxidants in CVDs is based on the premise that free radicals can injure arteries, can induce atherosclerosis by inducing fatty streaks resulting in atheroma.

By oxidation of LDL can injure myocardium during reperfusion in MI, hypertension occurs due to deregulating of nitric oxide production. The antioxidants can prevent most of these above processes. Several factors such as low food intake, nutrients malabsorption and inadequate nutrient release from the liver, acute phase response and infection and an inadequate availability of carrier molecules may influence circulating antioxidant concentrations 17. Metoprolol protects the vascular endothelium against free radical induced functional injury. 18

Glutathione peroxidase appears to have a major role in the prevention of oxidative stress; it may also be an important antiatherogenic antioxidant. Glutathione (GSH) is a tripeptide comprised of glutamate, cysteine and glyceine. GSH is present in mast cells, where it functions as an antioxidant protecting cells from toxic effects of ROS 19.

Glutathione peroxidase deficiency has endothelial dysfunction combined with structural vascular abnormalities, such as increased periadventitial inflammation and collagen deposition surrounding the coronary arteries. Glutathione has been regulated by immune cell function. Glutathione peroxidase with 5-lipoxygenase might constitute a protective function of the enzyme, in addition to its antioxidant activity. In present study Glutathione levels were significantly low in all hypertensive patients, the decreased was more pronounced in untreated hypertensives (Fig.1)

Hypertension is a state of increased free-radical activity which oxidatively stresses or injuries the endothelium conjugated dienes and lipid peroxides are by products of the lipid Peroxidation of cellular structures inducted by free radicals and can be conveniently measured as thiobarbituric-acid-reactive substances 20. In the our study the MDA levels were found to be higher in all hypertensive patients (Fig.1) without antihypertensive treatment compared with healthy subjects, MDA levels have been decreased with Metoprolol treatment as compared to atorvastatin treatment. It may result in its beneficial effects on the restoration of no bioavailability and endothelial function.

SGOT is an enzyme found in heart muscle, liver cells, skeletal muscle and kidneys. Injury to these tissues results in the release of the enzyme in blood. No significant changes were observed in both the treated groups. SGPT is found in a variety of tissues but is mainly found in liver, increased levels are found in hepatitis, cirrhosis obstructive jaundice and other hepatic diseases. In the present study no significant change in SGOT and SGPT was observed with the both of the drugs (Table 2)

In this study it was observed that the glutathione and total anti-oxidant status (both enzymatic and non enzymatic) was significantly decreased in cardiovascular patients as compared to healthy volunteers indicate that patients are unable to produce sufficient amounts of anti-oxidants to cope up with the increased oxidative stress in them. The decrease was more pronounced in untreated patients indicating that the anti-oxidants were nearly completely utilized to scavenge the superoxide free radicals and the increase in the anti-oxidants was due to the prevention of the free radical production after the drug treatment.

CONCLUSION: The strength of the present work lies in the fact that alterations in the levels of GSH, TAS and MDA before and after treatment. From the results it was clear that there was significant decrease in GSH and TAS in untreated patients and significant increase in the same after treatment. Hence, it appears that suitable anti oxidant supplementation is warranted to protect from free radical attack in cardiovascular patients and the drugs like Metoprolol and Atorvastatin were having the significant protection against oxidative stress in cardiac patients.

ACKNOWLEDGMENTS: The authors acknowledge the considerable efforts of the University Grants Commission (UGC), New Delhi for providing the grant to do this work.