ABSTRACT: Curcumin, a hydrophobic polyphenolic compound derived from the rhizome of the herb Curcuma longa, possesses a wide range of biological applications including anti-cancer. Nanocurcumin particles were prepared by top-down method as its can improve hydrophilic and increase bioavailability. As a result, curcumin concentration was yielded up to 10% (w/w), and the particle size was defined less than 1,000 nm in diameter. The particles were characterized by scanning electron microscope (SEM), transmission electron microscope (TEM), dynamic laser light scattering (DLS), and X-ray diffraction (XRD). The acute oral toxicity was done with a dose up to 500 mg per kg of body weight and no dead mice were found indicating the nanocurcumin particles are safe for long-term use. The model of hepatic fibrosis mice was induced by intraperitoneal (i.p) injection of 0.8 mL of carbon tetrachloride (CCl4) in olive oil (1:3 v/v) per kg of body weight. Nanocurcumin particles (15 mg/kg of body weight) were orally administered to hepatic fibrosismouse model in 4 weeks to evaluate the therapeutic potential in comparison to other groups. The results indicate that nanocurcumin have significant effects on reducing levels of serum alanine aminotransferase (ALT) and aspartate aminotransferase (AST) in CCl4-induced hepatic fibrosis mice. Histological examination shows that hepaticfibrotic livers of mice treated with nanocurcumin particles were recovered after 4 weeks

INTRODUCTION:According to the National Nanotechnology Initiative (2006), “Nanotechnology is the understanding and control of matter at dimensions of roughly 1-100 nm 1”. However, this definition of nanoparticle size was established for chemistry, physics and electronics; in the fields of nano food and herb research, the particle size of interest is 1–1,000 nm.

Nanotechnology is a multidisciplinary scientific undertaking, involves creation and utilization of materials, devices, or systems on the nanometer scale. Nanoparticles represent a promising drug delivery system of controlled and targeted release.

On the other hand, polymeric nanoparticles offer some specific advantages over liposome. For instance, they help to increase the stability of drugs/proteins and possess useful controlled release properties 2.

Nanoparticles are easier to pass through cell membranes in organisms and get interacted rapidly with biological systems 3.

It is an active constituent of the perennial herb Curcuma longa (C. longa). Curcumin consists of three principal yellow pigmented components: the coloring principle (1E, 6E)-1, 7-bis-(4-hydroxy-3-methoxyphenyl)-hepta-1, 6-diene-3, 5-dione and its desmethoxy- and bis-desmethoxy-derivatives. Regarding the therapeutic effects of curcumin in the human body, it is unlikely that substantial concentrations of curcumin occur in the body after ingestion at doses up to 12,000 mg/person 9, equivalent to 200 mg per kg of body weight for a 60 kg person. Major reasons contributing to the low plasma and tissue levels of curcumin appear to be due to poor absorption, intestinal metabolism, hepatic metabolism and rapid systemic clearance 10.

Nanocurcumin has been scientifically proven to provide an opportunity to expand the clinical repertoire of this efficacious agent by enabling easier aqueous dispersion. Thus, this study aimed to prepare nanocurcumin particles with the size ranging from 500 to 1,000 nm by top-down method. The biological activities of nanocurcumin were assayed in CCl4-induced hepatic fibrosis mice.

FIGURE 1: PROCEDURE FOR THE PREPARATION OF NANOCURCUMIN BY TOP-DOWN METHOD

The Swiss mice (16 – 28g) were obtained from Pasteur Institute of Ho Chi Minh City and kept in an environmentally controlled room (23 ± 2C, 55 ± 10% humidity) with a 12h light/ dark cycle and allowed free access to food and water.

Experimental animals: The Swiss mice (16 – 28g) were obtained from Pasteur Institute of Ho Chi Minh City and kept in an environmentally controlled room (23 ± 2oC, 55 ± 10% humidity) with a 12h light/ dark cycle and allowed free access to food and water.

Establishment of CCl4-induced hepatic fibrosis mouse model and grouping animals: Experiments were performed on male Swiss mice (30.09 ± 0.27 g), housed in stainless steel cages. The model of hepatic fibrosis mice was induced by intraperitoneal (i.p) injection of 0.8 mL of carbon tetrachloride (CCl4) in olive oil (1:3 v/v) per kg of body weight11,12. The mice were divided into five groups of eight mice per group which received different treatments as described below:

The curcumin dose was selected based on previous studies, in which a dose of 15 mg per kg of body weight was effective against the hepatic fibrosis 13, 14.

Histological examination: The harvested liver tissues were fixed in 10% formaldehyde 11 and stained with haematoxylin and Eosin (H&E) and Masson’s Trichrome 15 according to standard procedures provided by Nhi Dong 1 Hospital of Ho Chi Minh City. The samples were observed under a microscope Olympus BX51 (U25ND6 – Japan). 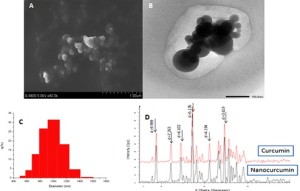 Testing the acute oral toxicity: The body weight of mice increased slightly (Table 1), mice were orally administrated with a dose up to 500 mg of nanocurcumin per kg of body weight and no dead mice were observed during the experiment. These results support the safe of nanocurcumin for long-term oral consumption. Throughout the study, no unusual behavior or differences between groups were observed, including hard breathing, moving difficulties, hunching or unusual interactions with caged mates.

TABLE 1: BODY WEIGHT AND MORTALITY DURING THE 48 HOURS OF THE ACUTE ORAL TOXICITY TEST WITH NANOCURCUMIN FROM 25 TO 500 MG PER KGOF BODY WEIGHT. DATA ARE MEAN ± SE VALUES

Establishment of CCl4-induced hepatic fibrosis mouse model: The mice administered of CCl4 in 2 weeks showed extremely high serum levels of aspartate aminotransferase (AST) (2,653.6 U/L) and alanine aminotransferase (ALT) (3,957.8 U/L), both of which are biological markers of hepatocellular damage as compared to those of mice administered vehicle (olive oil) alone and normal mice (Figure 3(D & E). Prolonged CCl4 treatment induced the formation of necrotic areas in the livers, with significantly enhanced infiltration of inflammatory cells into areas surrounding the centrilobular veins of the livers.

The tiny nodules appeared on the surface of liver cells (Figure 3A) in the CCl4-injected group. The surface of livers looked rough and lost smoothness in comparison to that of olive oil group and normal group. The livers of the CCl4-injected group were stained with H&E. At the initial stage, hepatic fibrosis might develop within or around portal tracts (portal or periportal fibrosis) or around the central vein, or fibrous tissue might be deposited directly within the sinusoids around single or multiple hepatocytes (pericellular fibrosis). With time, fibrous strands linked regions of the liver (portal to portal, portal to central, central to central), a process called bridging fibrosis in zone 1 of Figure 3B. Besides, accumulation of fat droplets within hepatocytes was known as steatosis (zone 7 of Figure 3C). Hepatocytes were swelling and necrosis in the zone 2 of Figure 3B. Necrosis referred to dead cell that, under the microscope, appeared as a mass of formless debris with no nuclei present.

Fibrous tissue was stained blue by the Masson’s Trichrome stain (zone 6 of Figure 3C). Fibrous tissue was formed in response to inflammation or direct toxic insult to the liver. Deposition of collagen had lasting consequences on hepatic patterns of blood flow and perfusion of hepatocytes. In the normal group, the harvested liver cells were smooth. Liver tissue from normal group was found to contain some damage of liver cells and centrilobular congestion with no infiltration of inflammatory cells. The histological structure of mouse livers from normal group was examined within a normal limitation (zone 9 of Figure 3C) but presented some clump of lymphocytes (zone 5 of Figure 3B). In the olive oil-treated group, mice were steatosis mild. The hepatic cells were stained and observed under the microscopy to appear a hepatic dysfunction without overting necrosis. There were some injuries surrounding the portal tracts of the liver (zone 3 of Figure 3B and zone 8 of Figure 3C) but no fibrosis. The portal tracts (zone 4 of Figure 3B) contained branches of the portal vein (PV), hepatic artery (HA), and the bile duct (BD) system. 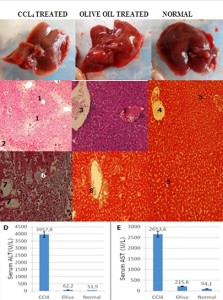 Effect of nanocurcumin on the CCl4-induced hepatic fibrosis mice: CCl4-induced hepatic fibrosis mice were then treated with nanocurcumin (15 mg per kg of body weight per day). After 4 weeks of treatment, mice were examined through serum ALT and AST levels and staining H&E and Masson Trichome. On examinations, livers became pale and changed in shape. Its surface was not smooth and tiny yellow spots were found in the PBS group (Figure 4D) while tiny red spots occurred in the curcumin group (Figure 4E). Figures 4A, B and C were observed without significant difference in the appearance. The surface of livers was smooth after 4-week treatment with a dose of 15 mg of nanocurcumin per kg of body weight (Figure 4C). Besides, the control group injected with olive oil (Figure 4A) and the other group received olive oil + 15 mg of nanocurcumin per kg of body weight (Figure 4B) showed livers with a normal shape and red color. Olive oil-injected group treated by nanocurcumin with a dose of 15 mg per kg of body weight showed the livers into the recovery phase as can be seen from the H&E staining, but also some congestion around portal tracts (zone 1 of Figure 5A). Serum ALT and AST levels had a trend to reduce after 4-week treatment with the values of 45.82 and 98.67 U/L, respectively. 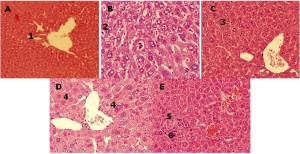 CCl4-induced hepatic fibrosis mice were orally treated by nanocurcumin showed significant decrease of serum ALT (Figure 6A) and AST (Figure 6B) levels from week 1 to week 4, notably, decreased sharply in week 3. The histological structure of the livers presented hepatic cells that contained two nuclei dispersedly (zone 3 of Figure 5C). It confirmed that the livers had recovered and the serum ALT and AST levels returned to normal range. However, serum ALT and AST levels of CCl4-treated mice and received 15 mg of curcumin per kg of body weight declined after 4 weeks with ALT and AST levels of 90.62 and 140.92 U/L, respectively, higher than those of group received nanocurcumin (29.42 and 59.82 U/L, respectively) (Figure 6A & B).

Although the liver were recovering in the hepatic fibrotic mice treated by curcumin, the H&E staining showed the presence of the granulomatous inflammatory (zone 5 of Figure 5E) and hepatic necrosis (zone 6 of Figure 5E). An important feature of granulomas is whether or not they contain necrosis. Granulomatous inflammation means characterized by granulomas known as macrophages. Macrophages are responsible for cleaning up dead cells or substances that it perceives as foreigners but is unable to eliminate. Besides, the hepatic fibrosis mice treated with PBS were still necrosis cell (zone 4 of Figure 5D) dispersedly, and serum ALT and AST values were obtained with the highest values of 370.87 and 472.07 U/L, respectively) in comparison to other groups (Figure 6A & B). 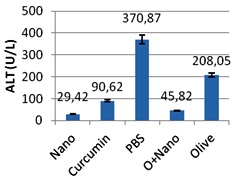 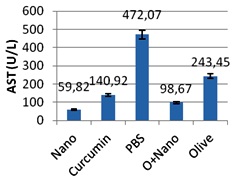 FIGURE 6: (A, B) SERUM ALT AND AST LEVELS IN CONTROL MICE AND HEPATIC FIBROSIS MICE TREATED WITH NANOCURCUMIN, CURCUMIN AND PBS. VALUES WITH THE SAME SYMBOL WITHIN EACH BAR ARE NOT SIGNIFICANTLY DIFFERENT AT THE 5% LEVEL OF PROBABILITY (N = 7/GROUP)

Results of serum ALT and AST levels from the olive oil-injected group received no treatment after 4 weeks fluctuated and reached a maximum value in week 3. Moreover, a result of H&E staining showed that there were inflammatory cells scattering everywhere (zone 2 of Figure 5B). In general, considering the whole trial, these results suggest that nanocurcumin particles certainly have effects on recovering damaged liver caused by CCl4 and suppression of fibrogenesis in the mouse model.

CONCLUSION: Nanocurcumin particles were successfully prepared by the top-down method with the particle size under 1,000 nm. The concentration of nanocurcumin could be achieved up to 10% (w/w) in aqueous solution.

Nanocurcumin can be safely consumed for a long time with a dose of up to 500 mg of nanocurcumin per kg of body weight. Our findings demonstrated that nanocurcumin particles were effectively against CCl4-induced hepatic fibrosis mice as compared to that of curcumin and PBS.

The nanocurcumin might approach the targeted organs with the effective dose, thus reducing serum ALT and AST concentrations and enhancing cell division in response to inflammation or direct toxic insult to the liver.