FDTs are designed to disintegrate rapidly on contact with saliva and enables oral administration without water or chewing, these formulations offer increased convenience and ease of administration with the potential to improve patient compliance, particularly in certain populations, where swallowing of conventional solid oral dosage forms presents difficulties. In the present study, the effect of a natural superdisintegrant Fenugreek and synthetic superdisintegrants sodium starch glycolate (SSG) was compared in the formulations of fast dissolving tablets (FDT). FDTs of Diclofenac (model drug) were prepared by direct compression method. These tablets were evaluated for weight variation, hardness, thickness, disintegration time, water absorption ratio, friability and dissolution. Swelling index was also investigated with an aim to compare the swelling property of Fenugreek with Sodium starch glycolate (SSG). Fenugreek showed higher swelling index than SSG. Hence, the present study revealed that this natural superdisintegrants showed better disintegrating property than the most widely used synthetic superdisintegrants like SSG.

INTRODUCTION: A vast variety of pharmaceutical research is directed at developing new dosage forms for oral administration. Most of these efforts have focused on either formulating novel drug delivery systems or increasing the patient compliance. Among the dosage forms developed for facilitating ease of medication, the orally disintegrating systems have been the favorite of product development scientists. In similar fashion the oral cavity is highly acceptable by patients due to mucosa being relatively permeable with rich blood supply and also virtual lack of langerhans cells makes oral mucosa tolerant to potential allergens 1. Fast dissolving dosage forms can be disintegrated, dissolved, or suspended by saliva in the mouth. They are useful in patients, like pediatric, geriatric, bedridden, or mentally disabled, who may face difficulty in swallowing conventional tablets or capsules leading to ineffective therapy, with persistent nausea, sudden episodes of allergic attacks, or coughing for those who have an active life style. Fast dissolving tablets are also applicable when local action in the mouth is desirable such as local anesthetic for toothaches, oral ulcers, cold sores, or teething, and to those who cannot swallow intact sustained action tablets/capsules 2.

They provide the convenience of a tablet formulation and also allow the ease of swallowing provided by a liquid formulation 3. FDTs offer the luxury of much more accurate dosing than the primary alternative, oral liquids. This segment of formulation is especially designed for dysphagic, geriatric, pediatric, bed-ridden, travelling and psychotic patients who are unable to swallow or refuse to swallow conventional oral formulations 4.

As they dissolve/disintegrate very fast when placed in the mouth, FDTs are the most convenient dosage forms for dysphagic, pediatric and geriatric patients with swallowing problem 5. They do not require water for administration, thus are good alternative for travelers and for bed ridden patients 6. They simply vanish when placed in the mouth, so cannot be hidden in mouth by psychotic patients.

Over the decade, the demand for the development of ODTs has enormously increased as it has notable impact on the patient compliance 7 US Food and Drug Administration Center for Drug Evaluation and Research (CDER) defines, in the ‘Orange Book’, an ODT as “a solid dosage form containing medicinal substances, which disintegrates rapidly, usually within a matter of seconds.

Many substances like microcrystalline cellulose, crosspovidone, croscarmellose sodium, sodium starch glycolate have been widely used as superdisintegrant in the formulation of Fdt. Similarly various natural substances like gum karaya, modified starch and agar have been used in the formulation of Fdt. Mucilage of natural origin is preferred over semi-synthetic and synthetic substances because they are comparatively cheaper, abundantly available, non-irritating and non-toxic in nature 8.

Fenugreek is an erect, strongly scented, robust, annual herb, about 30-80cm high (Fig. 1A) . It has compound leaves of light green color, 2-2.5cm long with yellow flowers and pointed pods. The seeds are brownish yellow and have peculiar odor (Fig. 1B). It has been used since ancient times both as food and medicine by the people living on the shores of Mediterranean and across Asia 9. 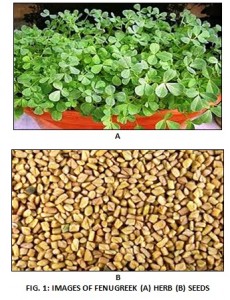 Hence in the present study, Fenugreek seed powder was used to develop FDTs of selected model drug Diclofenac. The disintegration, dissolution and swelling properties of FDT were compared with most widely used superdisintegrant SSG (Sodium starch glycolate). Diclofenac, a non-steroidal anti-inflammatory drug was selected as the model drug as it was widely used in the treatment of pain and inflammation.

MATERIALS AND METHODS: Seeds of Fenugreek were purchased from the local market Khari bawli of Chandni chowk, New Delhi and Diclofenac was made available in my college (Lloyd Institute of Management & Technology). Other materials used in study were of pharmaceutical grade.

Preparation of Fenugreek seeds powder: The dried fenugreek seeds were collected and size reduction was done in the grinder then sieved through mesh no. 80 and stored in desiccator.

The superdisintegrants SSG (5%, 10%, 15%) and Fenugreek (5%, 10%, 15%) were used in different proportion and in different combination. All the ingredients were passed through sieve # 60 and kept in hot air oven at 60ºC to make anhydrous and accurately weighed. The Drug, superdisintegrant, MCC, Mannitol were mixed to improve drug distribution and content uniformity and triturated well in a mortar. Then, Mg Stearate and Talc was passed through sieve # 80, mixed and blended well with the initial mixture. The mixed blend of Drug and Excipient was compressed using single Punching Machine to produce tablet weighing 200 mg having diameter 4.5mm, following the procedure six batches of MDT of Diclofenac Na in different ratio of superdisintegrant were prepared.

(Vb) was taken. Bulk density of the granules was calculated using following formula.

Tapped density 11, 12: Blend was tapped for a fixed (500) number of taps. The minimum volume (Vt) occupied in the cylinder and the weight (M) of the blend was measured. The tapped density (Electro Lab ETD 1020) (ρt) was calculated using following formula.

Carr's Index (CI) 13: Tapped and bulk density measurements can be used to estimate the carr's index of a material. Carr’s index was determined by,

Angle of repose: Angle of repose (α) was determined using funnel method. The blend was poured through a funnel that can be raised vertically until a maximum cone height (h) was obtained. The radius of the heap (r) was measured and angle of repose was calculated.

Evaluation of Fast Dissolving Tablets: QC tests for FDTs of all formulations were performed, and the average values were calculated. All the tablets were evaluated for different parameters as appearance, weight variation, hardness, Thickness, friability, wetting time, water absorption ratio, Disintegration time, and In vitro dissolution study (Table 3 and Table 4-7).

RESULT AND DISCUSSION: All the tablets were prepared under similar conditions to avoid processing variables. For each designed formulation, blend of drug and excipients was prepared and evaluated for micromeritic properties shown in Table 2. Bulk density was found to be between 0.42 and 0.631 gm/cm3 and tapped density between 0.521 and 0.621 gm/cm3 for all Formulations. Angle of repose was found to be in the range of 21.55 and 28.31. Hausner ratio was found below 1.40. All the formulation shows the good blend properties for direct compression and hence tablets were prepared by using direct compression technology.

As the tablet powder mixture was free flowing, tablets produced were of Hardness (4.54±0.24 kg/cm2) and friability loss (0.340 %) indicated that tablets had a good mechanical strength. All the formulations disintegrated within 30-60 min. (Table 3) Fenugreek is a natural substance used as disintegrant.

It contains mucilage which is present in the epidermis of the seeds. Fenugreek seeds powder has high swellability and gives uniform and slightly viscous solution hence, it is used as thickening and suspending agent.

Disintegration time for tablets prepared with Fenugreek was greater to that prepared with SSG indicating that the Fenugreek had good disintegrating property (Table 3). This rapid disintegration of the FDTs was due to the penetration of saliva into the pores of the tablet, which lead to the swelling of superdisintegrants to create enough hydrodynamic pressure for quick and complete disintegration of the tablet. Fenugreek was effective at concentration, i.e. 15 %. In vitro dissolution study shown in Table 6 and Table 7 revealed that (AF6) is an optimized formulation that releases more than 90% of drug within 60min as compared to the formulations of Sodium starch glycolate shown in Fig. 4 and Fig. 5.

TABLE 6: COMPARATIVE DISSOLUTION BETWEEN OPTIMIZED BATCHES  AS3 AND AF6

TABLE 7:  IN-VITRO DISSOLUTION STUDY OF BATCHES AS1 TO AF6 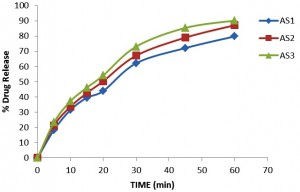 FIG. 2: COMPARISON OF DISSOLUTION PROFILE OF AS1, AS2, AS3 FORMULATION 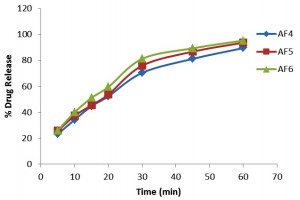 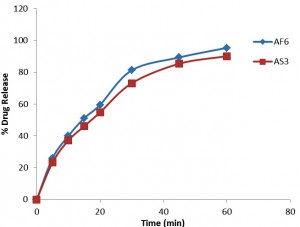 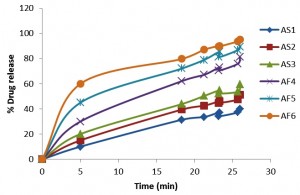 CONCLUSION: From the present study, it can be concluded that natural superdisintegrants like Fenugreek showed better disintegrating property than the most widely used synthetic superdisintegrant like SSG (Sodium starch glycolate).

ACKNOWLEDGEMENT: The author is thankful to Prof. Vandana Arora (Lloyd Institute of Management & Technology) for her guidance, valuable support and providing necessary facilities to carry out research work.