ABSTRACT: The present study is to investigate the cytotoxicity properties and haematological indices of synthesized molecules (S1-S4) in comparison to the standard drug 5 fluorouracil which reflects the anticancer potentials of the above molecules. Cytotoxicity studies were performed by in vitro MTT (3-(4, 5-dimethylthiazol-2-yl)-2, 5- diphenyl teterazolium bromide) assay. Haematological studies were done by drawing blood in the drug and synthesized molecules administered animals by retroorbital method. Haemoglobin, RBC, WBC, lymphocytes, Monocytes and Granulocytes counts were measured. All the above experiments were performed against Ehrlich ascites carcinoma (EAC) in Swiss albino mice. The percentage cytotoxicity and percentage viable cell counts revealed anticancer properties of the synthesized molecules. RBC count indicated protection of cell membrane from destruction and the WBC counts along with lymphocytes, Monocytes and granulocytes also show the immunoprotective characteristics of the novel molecules. Thus it has been concluded that the synthesized molecules (S1-S4) if supported by further molecular studies may have a promising role to play as anticancer agents.

INTRODUCTION: Cancer is one of the most devastating disease affecting humans, and the second most fatal disease after cardiac problems. Occurrence, development and decline of cancer cells are closely related. The current era beckons more efficient and safer therapeutic medications for amelioration of cancer. Synthetic derivatives have been known to play an important role in designing new drugs that prevent the onset of Cancer 1. Thus there is an increasing interest in the biomedical and pharmacological investigation of synthetic molecules and their derivatives

The Hematological indices like red blood cells (RBC), white blood cells (WBC) and hemoglobin were measured 4, 5. Cytotoxic analysis was performed by in vitro MTT assay 6. MTT assay is known to be an important in vitro cytotoxic study to measure chemosensitvity in human cancer cell lines 7.

Line bred female Swiss albino mice, 6-8 weeks old, weighing 20-25g were used for the present study. They were housed in standard environmental condition like, ambient temperature (25oC ± 1oC), relative humidity (55±5%), and 24hr light dark cycle. Animals had free access to standard pellet diet and water ad libitum. All animal experiments were carried out in accordance with the guidelines of CPCSEA. The institute animal ethical committee has given the approval for the animals and the studies on them (approval No. HSK CP/IAEC/12013-14/121).

The dose selection was done out according to safe dose calculation as indicated in acute toxicity studies (OECD TG420) for the drug and samples S1 to S4. Acute toxicity studies gave similar results like that of anticancer drug. With this basis, we selected the dose 20 mg/kg for further studies.

Male Swiss albino mice were divided in to 6 groups containing 12 animals in each group. The entire groups were injected with EAC cells (1X106cells/mouse) intraperitonealy.

In vitro anticancer activity was conducted by MTT (3-(4, 5-dimethylthiazol-2-yl) - 2, 5- diphenyl teterazolium bromide) assay.  Cells were grown in RPMI- 1640 medium at 37ºC and incubated at 5% CO2 in a humified incubator for 6-7hrs. Cells were harvested, counted (3×104cells/ml), and transferred into a 24 well plate, and incubated for 24hrs. Prior to the addition of test compound. Serial dilutions of test samples were prepared by dissolving compounds in DMSO followed by dilution with RPMI-1640 medium to give final concentration at 20μg /ml. Stock solutions of samples were prepared. Sample at 10μl and cell lines at 90μl were incubated for 72hrs.

MTT solution at 5mg/ml was dissolved in 1ml of Phosphate Buffer Solution (PBS), and 10μl of it was added to each of the 24wells. The wells were wrapped with aluminum foil and incubated at 37ºC for 4hrs. The solution in each well containing media, unbound MTT and dead cells were removed by suction and 150μl of DMSO was added to each well. Then the plants were shaken and optical density was recorded using a microplate reader (spectrophotometer) at 595nm. Taking DMSO as blank, controls and samples were assayed and replicated for each concentration. After 24h incubation of the mononuclear cells with synthesized derivatives, the cytotoxicity on the cancer cell lines was evaluated using MTT assay. The cytotoxicity was obtained by comparing the absorbance between the samples and control. Cell viability (%) = Mean OD/Control OD x 100

Blood was drawn from each mouse by the retroorbital plexus method and the white blood cells (WBC), red blood cells (RBC) and hemoglobin and determined.

All values were expressed as mean ± SEM. Statistical analysis was performed with one way analysis of variance (ANOVA) followed by DMRT. P value<0.05 was considered as significant when compared to control. 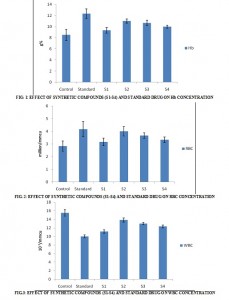 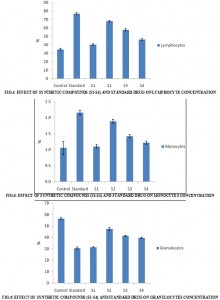 CONCLUSION: Based on the above results we can conclude that synthesized molecules (S1-S4), particularly S2 and S3 have shown comparable results to that of standard drug 5 fluorouracil thus exhibiting cytoprotective properties. Haematological studies also indicate anticancer properties when investigated against EAC in Swiss albino mice. However higher experimental models are required to further investigate their anticancer potential which may lead to design new anticancer drugs.