The objective of the paper is to study the effect of a permeation enhancer, sodium taurocholate on permeation of Ondansetron HCl from bioadhesive buccal tablet formulation by performing ex-vivo permeation experiments using porcine buccal mucosa. Optimized formulation has selected based on in-vitro drug release studies of bilayered bioadhesive buccal tablets. To the optimized formulation, 10mM sodium taurocholate was added to increase the permeation of poorly permeable ondansetron HCl. It is well known that natural surfactants like bile salts increase the permeability of drugs by perturbation of intercellular lipids. The results indicated that, from pure drug solution (5 mg/mL) about 88.63% cumulative percentage of drug permeated across porcine buccal mucosa with flux of 0.0235 mg.h-1cm-2. However, the optimized formulation with sodium taurocholate increased flux (0.0523 mg.h-1cm-2) and cumulative amount of drug permeated (65.44%) in comparison to formulation without permeation enhancer (38.45%, 0.0186 mg.h-1cm-2) with enhancement ratio of 2.81.

Buccal route offers several advantages which include avoidance of first pass metabolism by direct entry into systemic circulation (through the internal jugular vein), ease of administration, low enzymatic activity in oral cavity, possibility for the termination of delivery when required 1 and can be used for local as well as for systemic effect 2. However, some challenges which limit the utility of buccal administration include small area for absorption, low permeability of the buccal membrane compared to sublingual membrane and continuous secretion of saliva (0.5-2 L/day) which leads to dilution of drug 3-4.

Therefore, all these factors imply that the bioavailability of drug from buccal route is low. The barrier properties of oral mucosa are partly because of its natural structure (with thickness of 500-600 μm) and partly due to the inherent physico-chemical properties of drug.

Moreover, they should be pharmacologically and chemically inert. To enhance permeation, various physical approaches and chemical permeation enhancers are available.

These chemical permeation enhancers can increase the permeation by different mechanisms such as increasing the fluidity of lipid bilayer membrane or acting on components at tight junctions or by overcoming enzymatic barrier or increasing thermodynamic activity of drugs or surfactants like bile salts increases the permeability of drugs by perturbation of intercellular lipids. Moreover, the chemical permeation enhancers can be directly incorporated in to the formulation.

In this study, ondansetron HCl (ODN) was selected as a model drug; is a selective serotonin 5-HT3 receptor blocking agent. It is a potent antiemetic drug used in the treatment of chemotherapy or radiotherapy induced emesis and also used in the early onset of alcoholism 9. Although, it is well absorbed in the gastrointestinal tract; ODN undergoes first pass-metabolism resulting in low bioavailability. The physicochemical and pharmacologiacal properties of ODN like half-life (3-5 h), low dose (8 mg), and low molecular weight (365.86 Da) make it as a suitable candidate for buccal delivery.  It has been classified as BCS Class III drug owing to its low permeability and high solubility.  Therefore, it was excogitated to use permeation enhancer in delivering ODN through buccal mucosa.

Solubility studies: The solubility studies were conducted using pH 6.6 and pH 7.4 phosphate buffers which simulate the average pH values of oral cavity and blood respectively. An excess amount of drug was taken in 50 mL conical flasks containing 20 mL of phosphate buffers (pH 6.6 and pH 7.4) and closed with aluminum foil and constantly agitated at room temperature for 24 h using rotary shaker. After 24h, the solution filtered through 0.45 μm whatman filter paper. The amount of drug solubilized was then estimated by measuring the absorbance using UV spectrophotometer 13.

Buccal Tissue Preparation: Porcine buccal mucosa was obtained from a local slaughterhouse and used within 2 h of slaughter. Upon collection, the tissue was stored in Krebs buffer at 4°C. Underlying connective tissue was further removed using a scalpel blade and the remaining buccal mucosa carefully trimmed using surgical scissors to a thickness of about 300–400 μm. Thus prepared buccal tissues were placed in phosphate buffer with pH of 6.6 for 1 h prior to use 7.

The receptor compartment was filled with phosphate buffer pH 7.4 and donor compartment contained mixture of 5 mL phosphate buffer pH 6.6 in which 5 mg of drug was dissolved 14. Samples were collected after every one hour intervals up to 8 h and the amount of drug permeated through the buccal mucosa was then determined by measuring the absorbance values at 310 nm using a UV spectrophotometer. The experiments were performed in triplicate (n = 3) and mean values were used to calculate flux (J).

Preparation of Bilayered Buccal Tablets: Bilayered buccal tablets of ODN were prepared by direct compression method. All excipients and ODN were screened through sieve no. 40 and thoroughly blended in a polybag for 15 min excluding the lubricant. After sufficient mixing, lubricant was added and the blend was mixed for additional 2-3 min in a polybag.

The tablet preparation involved two separate steps; in the first step, the lubricated blend was compressed using 8 mm flat faced punch on 16 station rotary tablet compression machine. In the second step, upper punch was raised and ethyl cellulose (backing layer) was placed on above compact. Compression of both the layers resulting in formation of a bilayered buccal tablet 15. Composition of the prepared bioadhesive buccal tablet formulations of ODN are given in Table 1.

Ratios indicating that amount of CP to HPC

In-vitro drug Release: The USP XXIII rotating paddle method was used to study the drug release from the buccal tablets. Dissolution medium consisted of 200 mL of phosphate buffer with pH 6.6. Drug release was performed at 37oC±0.5oC, with agitation speed of 50 rpm 16. The backing layer of buccal tablet was attached to the glass slide with cyanoacrylate glue. The slide was placed in to the bottom of the dissolution vessel. Samples (5 mL) were withdrawn at pre-determined time intervals and replaced with pre-warmed fresh medium. The samples were filtered through 0.45 μm Whatman filter paper and analyzed by UV spectrophotometer at 310 nm.

Ex vivo permeation of Buccal Tablets: Ex vivo permeation study of buccal tablets (optimized formulation with and without permeation enhancer) through the porcine buccal mucosa was performed using Franz-type diffusion cell at 50 rpm and 37°C±0.2°C. The isolated buccal epithelium was carefully mounted between two compartments. The receptor chamber was filled with phosphate buffer of pH 7.4 and epithelium was allowed to stabilize for a period of 30 min 17.

After stabilization, the tablet with 8 mm diameter (0.502 cm2 area) was placed into the donor compartment and was wetted with 1mL of phosphate buffer pH 6.6 18. Samples were collected at every one hour intervals up to 8 h and same volume of pre-warmed fresh medium was replaced. The amount of drug permeated through the buccal mucosa was then determined by measuring the absorbance at 310 nm using UV spectrophotometer.

Solubility: ODN is being a highly soluble drug; it is showing pH dependent solubility. The solubility of ODN decreased with increasing pH and the values were found to be 12.85±0.5 mg/mL, 2.9±0.2 mg/mL in pH 6.6 and pH 7.4 respectively.

Ex-vivo permeation of Drug Solution: The structure and composition of porcine buccal mucosa is similar to human 14, hence, it has been selected for ex-vivo permeation studies. The cumulative percent of ODN permeated in 8 h through buccal mucosa from solution form was found to be 88.63% with the flux value of 0.0235 mg.h-1cm-2.

In-vitro Drug Release: The in-vitro drug release profiles of all the bilayered buccal tablet formulations are shown in  Fig. 1. In- vitro drug release studies revealed that the release of ODN from different formulations varied with characteristics and concentration of hydrophilic and matrix forming polymers. The release rate of ODN decreased with increasing concentration of HPC in F2 (32.8±0.7%). These observations are in compliance with the ability of this cellulose derivative to form complex matrix network which leads to delay in release. 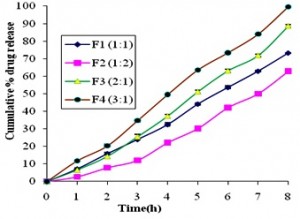 Ex vivo permeation of Buccal Tablets: Based on the in vitro drug release studies, formulation F4 was selected for the ex vivo permeation study. The drug permeation from buccal tablets through the porcine buccal mucosa was observed to steady and 38.45% of ODN permeated in 8 h with a flux of 0.0186 mg.h-1cm-2. Due to the low permeability of drug from the formulation, permeation enhancer (sodium taurocholate) was added in the concentration of 10 mM to the optimized formulation F4 to increase the permeability.

After addition, the flux and cumulative percent drug permeation was increased to 0.0523 mg.h-1cm-2 and 65.44% respectively with an enhancement ratio of 2.81 with respect when compared to formulation without permeation enhancer. Sodium taurocholate can extract lipids from the cell membranes, along with the extraction of mucosal lipid from the intercellular spaces by formation of micelles. This results in enhancing the passive diffusivity of the drug via transcellular (crossing the cell membranes and entering the cell) and paracellular routes 21.

It has been mentioned that sodium taurocholate could also cause the uncoiling and extension of the protein helices, which leads to opening the polar pathways for diffusion 22. Comparison of cumulative percent drug permeated from drug solution and formulations with and without enhancer was given in Fig. 2 and their flux values were given in Table 2. 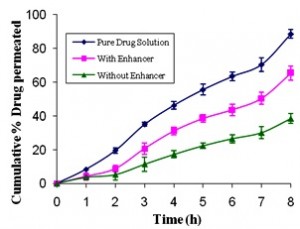 ACKNOWLEDGEMENT: The authors would like to thank the Department of Pharmaceutics, St. Peter’s institute of pharmaceutical sciences for providing research facilities.