ABSTRACT: A study was conducted to investigate the effect of different pH, on the growth and biopigment accumulation of a green alga Dunaliella salina isolates from Sambhar salt lake, Rajasthan (India). In order to monitor the impact of pH an algal samples of D. salina was exposed to different pH regimes (6 -10 pH) along with control (8.5 pH) over a period of 30 days. Set of experiments was conducted to study and evaluate the optimum growth and biopigment content for D.salina. The results of this experiment showed that optimum growth of D.salina was found at pH 8. Total chlorophyll content of the algal species decreases as the pH value was increased. While total carotenoids content of the algal species increases as the increases pH values and it was found that the green alga species changed its appearance from green to deep orange. The results indicate that algal species showed diverse response to pH stress.

INTRODUCTION: Algae are one of the earth’s most important natural resources that make up the lower phylogenetic echelons of the plant kingdom. Around 70% of earth’s surface is covered with water and the phytoplankton especially algae believed to contribute around 85-90% in photosynthesis. They are able to survive in diverse habitats and produce vast array of natural products including proteins, enzymes, bioactive compounds and carotenoids. Humans use algae as food, for production of useful compounds, as biofilters to remove nutrients and other pollutants from wastewaters, to improve water quality, as indicators of environmental change, in space technology, and as laboratory research system.

An alga is commercially cultivated for Pharmaceuticals, Cosmetics and Aquaculture purpose.

In the present era of biotechnology, scientists are investigating microalgae as a solution for the   problems that world is facing today. Microalgae are very diverse 1. They can create a range of useful   products, and there is a variety of ways in which they can be cultivated, manipulated, harvested and   utilized 2. Spirulina is now being commercial produced as a food supplement which is very rich in protein content. Many microalgae are being investigated for biofuel production.

In particular, some species have been identified as promising producers of useful lipids for biofuel production. Dunaliella salina is one such species, which shows lipid accumulation. D.salina is a unicellular species with no cell wall 3. Dunaliella have some advantages such as disruption of cells is much easier than that in other algae because of its cell wall less nature, continuous culture in laboratory is easy and the growth rate is relatively high and resistance to various environmental conditions is higher than in other algae.

Dunaliella is recognized as the only eukaryotic and photosynthetic organism, which grows in wide range of salt concentration, ranging from 0.05M to saturation 5.0 M 4. This biflagellate unicellular alga is responsible for most of the primary production in hyper-saline environment worldwide 5. Dunaliella is unique in the absence of a rigid polysaccharide cell wall, and the cells are enclosed only within a thin plasma membrane, which are able to change rapidly their volume and shape in response to hypo or hyper osmotic changes 6. It does this by maintaining a steadily low intracellular ion concentration7 and by forming compatible solutes such as glycerol that maintain the structure and volume of the cell 8. This ability to adapt, and its high metabolic and physiological versatility, has led to its identification as a high potential for large-scale cultivation of beta carotene 9.

A number of studies have revealed that growth10 and pigment compositions 11 of this alga are affected by various stress conditions. It was found that the β-carotene to chlorophyll a ratio gradually increased with an increase in salinity, and as a result, the algae changed its appearance from green to deep orange 12. The halotolerant unicellular green algae Dunaliella salina have potential to accumulate carotenoids to as much as 13% of the dry weight when grown under growth limiting conditions13.

pH is the important factor for algal growth as it can affect the activity of different enzymes. In general, different algal species have diverse ranges of tolerance to pH. Variation in pH can affect algal growth in a number of ways. It can change the distribution of carbon- dioxide species and carbon availability, alter the availability of trace metals and essential nutrients, and at extreme pH levels potentially cause direct physiological effects. Although Dunaliella   species has a wide range of pH tolerance but for its optimum growth and biopigment content pH 8 was found optimum 14. It was reported that at higher pH, there is a risk of precipitation by calcium salts and flocculation of algal biomass 15. This can lead to reduction in algal growth and it is necessary to avoid an increase of pH above 9 in Dunaliella cultures. The objective  of this research study was to develop a procedure to optimum growth and biopigment content  locally isolated  D. salina, as a step towards to indicate enhancing carotenoids induction, and then for β-carotene extraction. This objective was achieved by evaluating the optimum growth and biopigment content of locally isolated D. salina under different pH regimes.

The present study was an attempt to observed the effect of different pH regimes on the growth, biomass and biopigment composition of D. salina. In this study cells of D.salina were transferred from 6pH to 10 pH along with the control (8.5pH) in the ASWM 16 (Artificial Sea Water Medium).

Microalgae Source: Dunaliella salina was isolated from the Sambhar salt lake, Rajasthan, which is located about 35 km. from Jaipur, (Rajasthan).

Experimental Set Up: To evaluate various pH values for the growth and biopigments of D.salina, five different pH values viz. pH 6, pH 7, pH 8, pH 9, pH 10 along the control (8.5pH) were experimented upon.

The inorganic media for the above experiment set up remain the same and it was Artificial Sea Water Media (ASWM).The inorganic media was sterilized in   autoclave at 121 °C for 20 min before inoculation. Conical flasks of 500 ml capacity were prepared containing 250 ml media and 50 ml sample culture (inoculum). The cultures were incubated at 25 °C in a thermo-statically controlled room, with a 12:12 h light: dark period and at a light intensity of 2,500 lux 17 - 18. Observations were carried out every week over a period of five weeks. Cultures were shaken manually thrice a day to avoid clumping and accelerate the growth process. Experiment for pH regimes was carried out in triplicates.

Growth Measurement: Growth was followed through optical density, dry weight, and growth rate. Biomass was determined by optical density of cultures at 670 nm using Shimadzu UV/VIS spectrophotometer. The dry weight against standard absorbance unit was followed throughout the experiment period. 50-100 ml sample of culture were filtered on whatman GF/C filters, rinsed with distilled water and weighed after drying for 24h at 80 °C.

Growth rate was calculated on dry weight basis according to the equation given below.

Biopigments Analysis: The Chlorophyll contents of samples were estimated by Parsons and Strickland method 20 and carotenoids by Jensen method 21.

Statistical Analysis: Effect of different salt concentration on growth and biopigment of D.salina were compared   by one way analysis of variance (ANOVA) 22. Statistical analysis of data was carried out using MS Office Excel analysis Tool Pak. The significance between pairs of variable means was analysed using least significant difference (LSD) test at 5% level of significance.

RESULTS AND DISCUSSION: The results yielded from this research show that a great variability in different pH regime of D.salina.

Effect on Growth: Growth analysis of D.salina in various pH values shows different growth patterns 23. As compare to the other pH values, the best growth of D.salina was calculated at 8 pH.

In comparison to all the pH regimes tested, pH 10 was found least effective in promoting the growth of D. salina. The optical density and dry weight results were calculated to increases 1.6 times and 3.46 times respectively than the initial values, at the end of experiment. The least growth rate of alga (i.e. 0.021 divisions/day) was recorded at this pH value. (Graph 1: A, B)

The results demonstrate that at higher stress condition, photosynthesis activity adversely affected, hence the chlorophyll contain was decreased with increase in pH and carotenoids are secondary metabolite, produced by the cell in stress condition as cell protecting process 24. When the pH values is increased it acts as stress that enhances carotenoids production. It was found that the carotenoids to chlorophyll ratio gradually increased with increases in pH regimes and as a result the alga changed its appearance from green to deep orange. However cells of D.salina adapt to the higher stress conditions due to the presence of glycerol as it has an ability to balance the extracellular   osmotic stress 25. 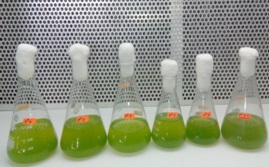 (a) D.SALINA GROWN IN DIFFERENT pH REGIMES (6 TO 10) INITIAL GREEN COLOUR OF ALGA 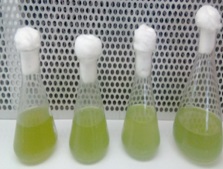 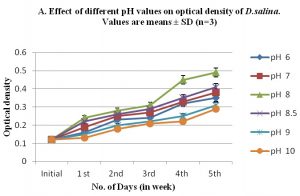 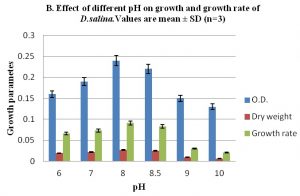 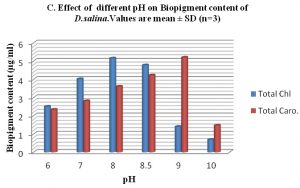 GRAPH A, B, C: EFFECT OF DIFFERENT pH REGIMES ON THE GROWTH, GROWTH RATE AND BIOPIGMENT CONTENT OF D. SALINA

CONCLUSION: On the basis of our findings we concluded that the maximum biomass production with high biopigment content (Chlorophyll) in Dunaliella salina were observed in cultures grown at pH 8. While highest Carotenoids accumulation calculated at pH 9.  D. salina has a wide range of pH tolerance from pH 6 to pH 11 with different growth rates. Growth and Chlorophyll content of the alga supported low pH values and total chlorophyll content of the algal species decreases as the pH value was increased. While Carotenoids accumulation in alga found at higher pH and total carotenoids content of the algal species increases as the increases pH values and it was found that the green alga species changed its appearance from green to deep orange. The alga Dunaliella includes many important scientific aspects and application on the biotechnology (β-carotene and glycerol production), physiology (osmoregulation), bioenergy (bioreactor and biofuel production) and pharmaceutical industries. The Sambhar Salt Lake is a natural habitat for D.salina and therefore it has a very promising potential as the site of biofuel and β-carotene production in the state of Rajasthan (India). The high salinity, hot climate, abundant sun light and the high temperature present at the lake provide nearly the ideal set of condition for biofuel production from Dunaliella salina.

ACKNOWLEDGEMENT: The work was gratefully supported by the Department of Botany, University of Rajasthan, Jaipur.