ABSTRACT: Pharmacists play a vital role in providing counseling to the hypertensive patients to understand disease, risk factors, medications, and non-pharmacological measures required in controlling Blood Pressure (BP). This study aims to evaluate the impact of pharmacist delivered counseling services on KAP levels and control of BP in hypertensive patients. A prospective, open-labeled, randomized control trial was conducted among hypertensive patients attending medical outpatient department of Non-governmental Organization (NGO) Hospital located in rural settings in Anantapur district, Andhra Pradesh, India. The study was performed after getting ethical clearance from the Institutional Review Board with a registration number of RIPER/IRB/2018/038 and in accordance with ICH-GCP and CONSORT guidelines. The study was carried out for a period of one year from February 2018 to January 2019. The findings of the study reveal that there was a significant difference in the mean systolic and diastolic BP levels in intervention (138 ± 10.5, 82.3 ± 7.2) and control group (146.0 ± 8.2, 87.2 ± 5.4) at final follow-up visits. The mean percentage of knowledge, attitude, and practice towards hypertension management were significantly improved in the intervention group compared to control group. The study concludes that pharmacist is an integral part of the health care team to improve the health outcomes in hypertension. The study shows that patients had positive attitude levels regarding the management of hypertension. Due to lack of knowledge and awareness, the patients were under irrational practices. Finally, the pharmacist mediated counseling had significantly improved the KAP levels and BP control.

Globally, more than 1.39 billion (31% of all adults) people are affected by hypertension 2. Recently in India, an epidemiological study conducted by Gupta VK, et al., shown a prevalence of 27.1% 3.

There was a rapid rise in the prevalence of HTN among both urban and rural people in the country 4. In India, 42-89% of HTN patients have uncontrolled BP 5. The major reason for the uncontrolled HTN is medication non-adherence and lack of knowledge regarding medications, lifestyle changes and non-pharmacological measures available to control BP level 6.

The pharmacist plays a vital role in providing counseling to the hypertensive patients to understand disease, risk factors, medications, and non-pharmacological measures required in controlling BP. Patient’s Knowledge, Attitude, and Practices (KAP) towards hypertension management is a very important outcome measure used to check the effect of any educational intervention. This study aims to evaluate the impact of pharmacist delivered counseling on KAP levels and control of BP in the hypertensive patients from various regions of Anantapur district.

MATERIALS AND METHODS: A prospective, open-labeled, randomized control trial was conducted among hypertensive patients attending the medical outpatient department of Non-governmental Organization (NGO) Hospital located in rural settings in Anantapur district, Andhra Pradesh, India. The study was performed after getting ethical clearance from the Institutional Review Board with a registration number of RIPER/IRB/2018/038 and in accordance with ICH-GCP and CONSORT guidelines. The study was carried out for a period of one year from February 2018 to January 2019.

Study Criteria: All the patients aged more than or equal to 18 years, irrespective of the gender suffering from hypertension and having co-morbidities were recruited in the study. The patients who are not willing to participate and unable to respond to the Telugu/English version questionnaire were excluded from the study.

Sample Size Calculation: The number of participants included in the study was calculated by using Epi-Info software, by considering 5 mm of Hg of difference in systolic BP between intervention and control group, 80% power, and a 5% margin of error. After accounting 15% of dropouts (two-sided test) 200 (100 per group) number of participants are required.

Enrollment of the Subjects: A total of 1234 patients were eligible for the study after record screening, in which 634 subjects (un-willing = 380; No answer = 254) did not participate. Remaining 600 patients were called to the study site and screened for eligibility, in which 390 were excluded (Not meeting inclusion criteria = 210; absent or Cancellation = 180). Finally, 210 participants were randomized into test and control group by a simple randomization method. Verbal and written informed consent was obtained from the study participants after clear explanation about study objectives and outcomes. In test group 10 and in control group 8 participants were failed to attend follow-up visits. A total of 95 in the test group and 97 in the control group were subjected to analysis. The flowchart of the participants was shown in Fig. 1. 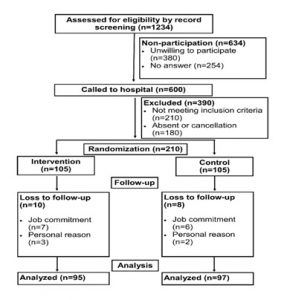 FIG. 1: FLOW CHART OF THE PARTICIPANTS

Data Collection: A suitably designed, pre-validated KAP questionnaire was used to collect the data from the study participants. The questionnaire comprises three parts. Part A collects information related to socio-demographic characteristics; Part B collects knowledge levels of patients concerning hypertension and its management strategies, Part C contains attitude and practices of patients in control of hypertension by using pharmacological and non-pharmacological measures.

A total of 14 questions were used in the questionnaire to obtain knowledge levels of study participants. Each question allotted ‘1’ score for the correct answer and ‘0’ for a wrong answer. A maximum of 14 and a minimum of zero will obtained from each participant for knowledge domain. The knowledge score of each participant was translated into percentage by using a formula called, obtained score divided by the maximum expected score, multiplied with 100. According to bloom’s cutoff criteria if a person scores 80% – 100%, considered as good knowledge, 60% - 70% scored, considered as moderate knowledge, and < 60%, considered as poor knowledge 8.

Attitude towards the management of hypertension was assessed by putting seven statements on 3 points Likert’s scale, the statement on Likert’s scale has positive and negative response ranges from agree 3, neither agree or nor disagree 2, and disagree 1. The maximum score expected was 21 and a minimum of 7. The attitude score of each participant was translated into percentage by using a formula called, obtained score divided by maximum expected score, multiplied with 100. If person scores ≥ 50%, considered as positive attitude and < 50%, considered as a negative attitude towards hypertension management.

Rational practice towards hypertension management was assessed by using eight questions. Each correct answer was given ‘1’ score and wrong answer as ‘0’. The total score of practice question ranges between ‘8’ and ‘zero’. The obtained score of each participant was translated into a percentage by using a formula called obtained score divided by maximum expected score, multiplied with 100. If the person scores ≥ 80%, considered as rational practice and < 80%, considered as an irrational practice towards hypertension management.

Study Procedure: At the baseline socio-demographic characteristics like age, gender, marital status, educational status, occupation, comorbidities, BMI, and Blood pressure levels were collected from both test and control group. Patients in the test group were provided face to face counseling by the pharmacist. The counseling focused on hypertension definition, regular monitoring of BP and body weight, Dietary approach to stop hypertension (DASH) diet, physical exercise, stress management, salt restriction, lifestyle changes (Smoking and alcohol), and regular intake of medications as per physician instructions. The participants in the control group will follow the usual care given by the physician.

Statistical Analysis: Epi-Info 7 for DOS version 3.5.1 software (Centers for Disease Control and Prevention, Clifton Road, Atlanta, USA) was used to analyze collected data from all study participants. The baseline demographic and clinical characteristics were represented as descriptive statistics like frequency, proportion, mean and standard deviation. Analytical statistics like chi-square and unpaired t-test were used to assess the significant effect of patient counseling on blood pressure and KAP percentage levels.  A P value less than 0.05 was considered a statistically significant result.

The participant’s correct responses towards knowledge, attitude, and practices inventories on hypertension management were high in the intervention group compared to the control group at final follow-up visits. The results were depicted in Tables 2 and 3.

TABLE 2: KNOWLEDGE ABOUT HYPERTENSION AND ITS MANAGEMENT AMONG STUDY PARTICIPANTS AT FINAL FOLLOW-UP

TABLE 3: ATTITUDE AND PRACTICE TOWARDS HYPERTENSION AND ITS MANAGEMENT AT FINAL FOLLOW-UP

TABLE 4: ADEQUACY OF KNOWLEDGE, ATTITUDE, AND PRACTICE REGARDING HYPERTENSION AND ITS MANAGEMENT AT BASELINE AND FOLLOW-UP VISITS

The mean percentage of knowledge, attitude, and practice towards hypertension management were significantly improved in the intervention group compared to the control group, as represented in Table 5.

DISCUSSION: Pharmacist plays a significant role in providing patient counseling services to patients suffering from chronic disorders 9. This study will generate evidence on role pharmacist mediated counseling in hypertension management. It is very difficult to control blood pressure with medication alone. So, a combination of non-pharmacological and pharmacological therapy will have a significant effect on blood pressure control in hypertension. The study findings reveal that there was a significant improvement in KAP and BP control in the intervention compared to the control group.

Most of the patients in the study were belongs to the male gender, which was similar to the study conducted in Guntur 10. The mean age of the study was 43.7 ± 9.11 years in the intervention and 43.8 ± 8.26 in control groups. These findings slightly contrast with a study conducted by Ramanth KV et al., where the majority of the persons belong to 50-70 years 11. All the socio-demographic and clinical characteristics of the study participants were equally distributed between intervention and control groups.

Strengths and Limitations: The study was conducted in out-patient department of hospitals located in rural settings in Anantapur district. So, the findings were not extrapolated to in-patients and critically ill patients. The study highlights and synthesizes the evidence relating to pharmacist role in the management of hypertension. Extending and utilizing the clinical pharmacist services in the chronic disorder management will improve the economic, clinical and humanistic outcomes 17.

CONCLUSION: The study concludes that pharmacist mediated patient counseling services were significantly improved the patient’s knowledge, attitude, and practice towards hypertension management. There was a significant reduction in both SBP and DBP levels in the intervention group compared to control group. The study suggests future researchers incorporate the patient reporting outcomes like quality of life into the study to evaluate the effectiveness of pharmacist intervention.

ACKNOWLEDGEMENT: The authors would like to thank all participants who are involved in this research study. We also thank Dr. Sudheer Kumar, Director, RDT Hospital, Anantapur for his support to conduct a study in hospital. All the authors are wholeheartedly thankful to the people who are directly or indirectly responsible for the completion of the work.