ABSTRACT: Tuberculosis is a global problem. The tuberculosis is the common cause of male infertility in developing countries due to the use of second-line anti-tuberculosis drugs (ATB). The experiments were conducted at Unique Bio diagnostic Enterprise Veterinary Pathology Laboratory Parel, Mumbai for chemiluminescence immunoassay to study the levels of testosterone in male Sprague-Dawley rats. The histological analysis was also carried out to confirm the study. From the study it was found that the body weights are inversely proportional to the weight of the testis. It was also found that Ethionamide administered rats showed lowest levels of testosterone, which may lead to infertility. To increase fertility potential we have administered Piper nigrum (Linn.) (PnS)  seed ethanolic extract in combination with Ethionamide (ETH) + Para aminosalicylic acid (PAS) drugs. From the above results it is found that Piper nigrum increases the level of testosterone by maintaining the fertility potential in male Sprague-Dawley rats, it is also confirmed that the histological reconciliation of testis was appreciably restored in Sprague-Dawley rats administered with Piper nigrum.

Therefore, it is necessary to monitor reproductive health during antituberculosis chemotherapy 2. Ethionamide (ETH) (eth eye on a mide) is most frequent drug used as an antimycobacterial function. ETH drug has been responsible for many cases of clinically illusive acute liver injury that arise in up to 5% of patients which can be fatal and malefic cases are also reported 3. Side effects associated with the use of this drug are gynecomastia, gastrointestinal upset, nausea, anorexia, diarrhea, metallic taste, depression, drowsiness, and fatigue. It causes teratogenicity and hence it is avoided in pregnancy 4.

Para-amino salicylic acid (PAS) is the first antibiotic found to be efficient in the treatment of tuberculosis in the 1940s 5. PAS enhances the activity of drug isoniazid and streptomycin and is extensively used in the combinations against Mycobacterium tuberculosis 6. PAS treatment is uncommon, and a highly drug-resistant strain seems to have limited resistance to this drug. Thus, PAS became the principle second-line agent for the treatment of MDR-TB 7. There are insufficient animal and human safety data on the use of PAS, and it is not used in pregnancy as there were reports on-ear and limb deformities 4.

The use of plants in medicine is an age-long practice in various parts of the globe for both prevention and curative purpose. Today, about 80% of the world population dependent on botanical agents as medicine to meet their health issues 8. In developing countries, traditional plant remedies are widely used to treat various ailments. Many varieties of plants have been used for treating different kinds of diseases including male fertility problems because of their androgenic and spermatogenic effects or potentials 9. Nowadays the dietary supplements and herbal remedies have increased the interest of researchers to treat different kinds of diseases.

Piper nigrum Linn. (family Piperaceae) is one of the most commonly used spices and considered as ’’The King of spices’’ among various spices. Piper nigrum is an effective anti- M. tuberculosis and is active against both drug-sensitive and resistant strains of TB 10. Piper nigrum, along with other phytoconstituents contains major pungent alkaloid Piperine, which is known to possess many interesting pharmacological actions. It is widely used in different traditional systems of medicine like Ayurvedic and Unani System of medicines 11, 12. Piperine exhibits diverse pharmacological activities like antihypertensive and antiplatelets 13, antioxidant, antitumor 14, antiasthmatics 15, antipyretic, analgesic, anti-inflammatory, anti-diarrheal, antispasmodic, anxiolytic, anti-depressants 16, hepato-protective 17, immuno-modulatory, antibacterial, antifungal, anti-thyroids, antiapoptotic, anti-metastatic, antimutagenic, anti-spermatogenic, anti Colon toxin, insecticidal and larvicidal activities etc.

Piperine has been found to enhance the therapeutic efficacy of many drugs, vaccines and nutrients by increasing oral bioavailability by inhibiting various metabolizing enzymes 18. It is also known to enhance cognitive action and fertility 19.

In view of the severe undesirable side effects of synthetic drugs, there is a need to focus on systematic research methodology and to study the scientific basis for the traditional herbal medicines that are claimed to show fertility potential. Therefore, because of the above literature survey it was found that ETH and PAS used as antituberculosis drugs, but at the same time these drugs are responsible for sterility in human beings leading to disturbances in androgenic hormonal balance. Therefore, in the present study, attention has been given on the aspects of enhancement of fertility potential due to Piper nigrum against ETH and PAS induced sterility in the Sprague-Dawley rats.

Collection of Sample: Fresh seeds of Piper nigrum were procured from the botanical garden of Kokan Krushi Vidyapeeth, Dapoli, Ratnagiri. The initial identification was made by referring related literature survey, and final identification and confirmation were done at the department of horticulture, Kokan Krushi Vidyapeeth, Dapoli, Ratnagiri before process the sample at the department of Zoology S. S. & L. S. Patkar College Goregaon (west), Mumbai India.

Extraction: The ethanolic extract of the seeds was carried out by Soxhlet extraction method. The sample was evaporated to dryness and powder was weighed and the yield so obtained was collected in a sterile container and kept at -20 ºC till further use. The weight of the powder was calculated based on weight of the seeds.

Experimental Design: Thirty (32) male Sprague- Dawley rats (average weight 150 - 240 g) were used for the experiment. They were purchased and procured from the National Toxicological Centre, APT Testing & Research Pvt. Ltd. (ATR) Pune. The experimental study was approved by Ethical committee at APT Research Foundation, Pune before the experimentation (CPCSEA NO. 40/PO/ReBi Rc/S/99/.11.03.2014) the animals were acclimatized, maintained and housed in APT laboratory for a week.

The dose-volume administered orally/per day to individual rat to 28 days. After 28 days of drugs and Piper nigurm administered rats were weighed for their body weight and blood of all the animals were withdrawn for hormonal assay prior to the scarification of the animals. The animals were dissected and absolute weight of testis was recorded before the histopathological analysis.

Hormonal Assay: Blood samples of the above groups were drawn after 28th day from cardiac puncture into heparinised bottles and was analyzed at the Unique Bio Diagnostics Enterprises (UBE) Veterinary Pathology Laboratory, B-20, Bhuvaneshwar, Dr. V. K. Valimbe Road, Near Gururani Nagkanya Chowk, Parel Village, Mumbai, for Chemiluminescence immunoassay of testosterone as proposed by 20, 21 by using Immulite 2000 immunoassay system, (Siemens).

Histological Analysis: Testes were removed and immersed in Bouins solution for fixation and processed until the embedded in paraffin for histological analysis. Five micron thick sections were prepared using microtome and staining using Hematoxylin and Eosin (H&E) method as proposed by Davidson, 22 and histological specimens were examined under the Biological digital microscope-Motic B1 Series.

TABLE 1: THE EFFECT OF P. NIGRUM ADMINISTRATION ON INFERTILITY INDUCED BY ETHIONAMIDE AND PARA AMINO SALICYLIC ACID IN MALE RATS

TABLE 3: TESTES WEIGHTS IS EXPRESSED AS MEAN WHERE N=4 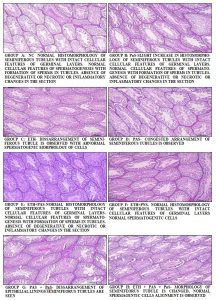 The rare case study carried by, 24 studied the effect of ETH on human being and they recorded a decreased level of testosterone in male. Our results are in agreement with the results of Sharma and Bansal. Here above our, results are also correlated with histological architecture of male rats it is clearly found that the group administered with ETH showed disarrangement of seminiferous tubules with abnormal spermatogenic morphology. From the above results we found that after administration of Piper nigrum in combination with ETH and PAS, the morphology of seminiferous tubules has changed and showed normal spermatogenic cell alignment which confirms that Piper nigrum has fertility potential.

The study carried out by 25 concluded that Piper nigrum is dose-dependent and they have also shown the decreased weight of organs. Our study is in agreement with the study carried out by Mishra. In our study, we found that the body weights are inversely proportional to the weight of testis. In addition to body weights we also found the reversal changes in the histological architecture of the reproductive organs. Our study is also is in the agreement with the study carried by 26 where they have given the clear cut evidence that Piper nigrum enhances the reproductive functioning in male mice by significantly increasing testosterone. Piper nigrum contains a verity of nutrients including zinc has been reported by many authors. These nutrients are responsible for numerous physiological processes in organisms 27, 28.  Zinc supplementation can improve the antioxidative status in goats and proved to increased serum levels of sex hormones including testosterone in rats 29, 30.

In the present investigation, the increased level of testosterone may be because of zinc and anti-oxidant property of Piper nigrum, which may also be responsible for the improvement of histological architecture of the testis of rats.

CONCLUSION: In the present investigation we have examined the role of Piper nigrum against infertility induced by ETH and PAS in male Sprague-Dawley rats. In our study it is found that body weights are inversely proportional to the weight of the testis. It is also found that Piper nigrum enhances the reproductive functioning in male Sprague-Dawley rats by significantly increasing weight of testosterone. The results of the above study are also correlated with histological architecture of male Sprague-Dawley rats it is clearly found that the group administered with ETH showed disarrangement of seminiferous tubules with abnormal spermatogenic morphology. We found that after administration of Piper nigrum in combination with ETH and PAS, the morphology of seminiferous tubules has changed towards normal spermatogenic cell alignment, which confirms that P. nigrum has fertility potential. The combined dose of (ETH + PnS) recovered the animals by increasing the level of testosterone to maintain fertility of male rats.

This study suggests that the antituberculosis drugs in combination with Piper nigrum are effective to cure the disease and to maintain the fertility in rats. The study further suggests that clinical investigations are needed to find the active component in Piper nigrum, which is responsible for the enhancement of testosterone in male rats.

CONFLICT OF INTEREST: There is no conflict of interest in the present work.