INTRODUCTION: Sustained release systems include any drug delivery system achieves release of drug over an extended period of time, which not depends on time. Hydrophilic polymer matrix is widely used for formulating a Sustained dosage form. The role of ideal drug delivery system is to provide proper amount of drug at regular time interval & at right site of action to maintain therapeutic range of drug in blood plasma.1

Controlled release: It includes any drug delivery system which releases the drug pre determined rate over an extended period time.

Pelletization is an agglomeration process that converts fine powders or granules of bulk drugs and excipients into small, free flowing, spherical or semi spherical units, referred to as pellets. Pellets range in size, typically, between 0.5 – 1.5 mm, though other sizes could be prepared. Pellets can be prepared by many methods, the compaction and drug-layering techniques being the most widely used today. Regardless of which manufacturing process is used, pellets have to meet the following requirements.

These delivery systems are mainly reservoir type of oral dosage forms having multiplicity of small distinct units, each having some preferred characteristics. In these types of drug delivery systems, the dosage of the drug substances is separated on a plurality of subunit. Multiparticulate dosage form is pharmaceutical formulations where the active substance is in the form of number of small independent subunits. They give many advantages over single-unit systems due to their small size. Drug safety may also be augmented by using multiparticulate dosage forms, mainly for modified release systems. To deliver the projected entire dose, these subunits are packed into a capsule or compressed with added excipients to form a tablet.6, 7

The required quantity of sugar spheres (16/20#) were weighed and transferred into a fluidized bed processor and required quantity of Triethyl citrate or acetyl tri butyl citrate and Polysorbate – 80 were dissolved in specified volume of water. Required volume of Aqua coat ECD (FMC Bio Polymer.) was added to above solution under continuous stirring. Later required quantity of Budesonide was dispersed in above suspension by stirring. This suspension was sprayed on sugar spheres by bottom spray technique. This drug and polymer matrix layered pellets were used for enteric coating. Composition of drug and polymer matrix coated pellets for formulation trails were given in Table 1 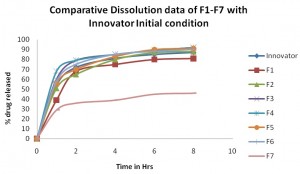 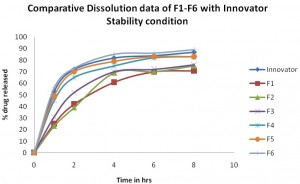 CONCLUSION: The main aim of the study was to investigate the effect of two different types of plasticizers, i.e., Triethyl citrate (TEC) and Acetyl tri butyl citrate on the in vitro release kinetics of Budesonide from sustained-release multi unit pellets during initial and stability conditions.

The drug Budesonide is corticosteroid and used for the treatment of Crohn’s disease. Before going to develop the formulation, a detail product literature review was carried out to know about the Innovator’s (type of dosage form available in market, weights, all other parameters and excipients used) product and the patent status of the drug. Preformulation study involving drug excipients compatibility was done initially and results indicated the compatibility with all the tested excipients. The study was carried out by suspension matrix layering method. In this method first drug and polymer solutions were mixed, coating was done on the sugar spheres; further enteric coating was done on polymer matrix coated pellets.

Different trials were conducted with two different types of plasticizers like Acetyl tri butyl citrate and Tri ethyl citrate and at different concentrations from 10% to 30 % w/w of Aqua coat ECD 30. Trails from F1-F3 were planned with Acetyl tri butyl citrate as a plasticizer among them F1 (10% w/w Plasticizer) data was not matching with innovator, F2 & F3 (20% & 30w/w Plasticizer) dissolution data were matching with innovator in initial condition but in accelerated stability condition  dissolution data was found to reducing compared with innovator.

ACKNOWLEDGEMENTS: The authors are grateful for support from the Hetero Labs Ltd, Hyderabad.