ABSTRACT: This study was carried out to evaluate the effect of boiling on amino acids contents of the fruits of four species of the family Cucurbitaceae which were Cucurbita maxima D, Cucurbita pepo L, Cucurbita moschata and Lagenaria siceraria variety supreme court. In this study, fresh fruit of the four species were subjected to conventional processing technique which is boiling as well as drying. The dry and boiled fruits were evaluated for essential and nonessential amino acids content as well as total amino acids. Amino acids profile of boiled and dry fruits showed the presence of eight essential and nine non essential amino acids. The four species recorded a considerable amount of proline as follows: L. s. uncooked (370 mg/100gm), C. mo. uncooked (318 mg/100gm) L. s. cooked (258.8 mg/100gm), C. p. uncooked (232mg/100gm) and C. p. cooked (208mg/100gm). The highest total amount of amino acids of boiled fruits was recorded in Lagenaria siceraria (4977.6mg/100gm) followed by Cucurbita pepo (2870.1mg/100gm) where as the lowest was recorded in Cucurbita maxima (1427mg/100gm).  Glutamic acid was the most abundant amino acid in the four species, the highest amount of this amino acid (1367mg/100gm) was recorded by Cucurbita pepo untreated fruits.  In general all Cucurbita species recorded a decrease in amino acids of treated fruits except proline in C. ma. and alanine in C. p. whereas in L. s. there was an increase in six amino acids which were aspartic acid, threonine, serine, glutamic acid, glycine and lysine.

INTRODUCTION: Family Cucurbitaceae is a wonderful family comprises members in all field of medicine as well as their nutritional value. The usefulness of the most member of Cucurbitaceae is due to the presence of bioactive constituents such as alkaloids, tannins, flavonoids and phenolic compounds. These chemicals are known to carry out vital medicinal roles in human body1.

Three of the studied species which were Cucurbita maxima, Cucurbita pepo, Cucurbita moschata belonging to the genus Cucurbita which consists of 15 species whereof 10 are wild species and five cultivated species 3, members of this genus are monoecious annual or perennial scandent herbs 4, the three species are well known in Sudan as edible species; the fruits were cooked in different ways whereas the seeds were roasted as well as traditionally using in expelling intestinal parasite. Lagenaria siceraria belonging to the genus Lagenaria which covers five perennial wild species 3. In Sudan Lagenaria siceraria has not been known as a vegetable crop, the existing subspecies has been known as siceraria3 with a bitter fruit and hard shell used as domestic utensils like bottles, bowls, milk pots and containers of several types made out of the dried shells.

Heating can be both beneficial and detrimental to nutrient content of foods. It generally improves the digestibility of foods, making some nutrients more available. A typical example is the protein in legumes, which is made more digestible by heating because of the inactivation of anti-nutrients such as trypsin inhibitors5. The main aim of this study is to find out through scientific bases, the effect of processing on amino acids profile of four species of Cucurbitaceae widely used throughout the world.

Detection of the amino acids:

The content of amino acids was determined by the techniques of 6. 200 mg of finely ground fruit was taken in a hydrolysis tube, then 5 ml of 6N HCl was added and the tube was closed tightly. The closed tube was incubated at 110oC for 24 hours. After incubation, the solution was filtered. 200 µL of the filtrate was taken and evaporated at 140o C for about 1 hour.1ml of a sample diluting buffer was added to the dried filtrate. Note that for the exact pH value adjustment, hydrochloric acid has to be dosed individually. The quantity of amino acid in each fraction was estimated using Amino Acid Analyzer (Syknm S 7130 Germany).

TABLE 1: ESSENTIAL AMINO ACIDS OF THE FRUITS OF THE FOUR SPECIES OF CUCURBITS CONDUCTED in mg/100gm DRY WEIGHT 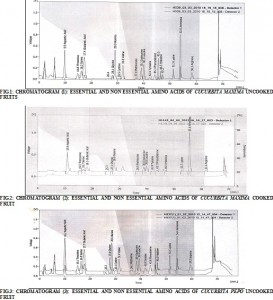 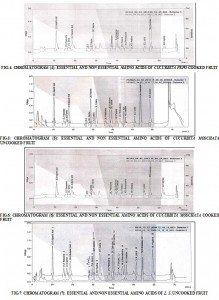 Comparing amino acids in treated and untreated fruits, all Cucurbita species recorded a decrease in amino acids of treated fruits except proline in C. ma. and alanine in C. p. whereas in L. s. there was an increase in six amino acids which were aspartic acid, threonine, serine, glutamic acid, glycine and lysine. The decrease in the amount of proline, isolucine, histidine and tyrosine is agreed with the finding of 2-4, 5b, 12 who investigated effect of cooking method on amino acid composition and nutritional parameters of Persian sturgeon (Acipenser persicus). They recorded that the losses of some amino acids such as lysine in grilled and fried samples can be due to the formation of different Millard product during heating. Lysine is the most susceptible amino acid in intact proteins because it has a free amino group at the epsilon carbon unit that is readily available to react with reducing sugars 13, 14. Free lysine is even more reactive because it has two free amino groups.

ACKNOWLEDGEMENT: The authors are grateful to Omdurman Islamic University and Ministry of Science and Technology for financial support to his work.