ABSTRACT: Nanobiotechnology in contemporary society is novel and has enhanced utility for size, distribution and morphology determination of various biomolecules. To prepare nano particles the used metals are gold, silver, mercury and platinum for significant applications in electronics, magnetics, optoelectronics and information storage. For our study we selected the sliver, since it is widely been used from ancient time for the treatment of bacteria, microbes, infections and serious burns as medicine or cosmetics and lotions in an emergence of new therapeutic agents. Plants are considered as environment friendly and efficient to produce in large-scale synthesis. So we selected the Trichodesma indicum for our study with combination of silver nitrate for silver ingredient in synthesis of silver nanoparticles (AgNPs) and their anti venom activity was studied. The properties of AgNPs of T. indicum were submitted to another journal had spherical particles of sizes 21 - 25 nm with active functional moieties of amino, carboxy, alcoholic and aromatics which contained the zeta potential of 30.9V. These properties of stem extract particles found to inhibit enzymes of cobra venom at 10 and 20 µg/ml. However the fluorescent microscopy analysis of these two concentrations has revealed that the stem extract when compared to leaf extract formation of some cell clumps were even not found. Therefore AgNPs at 10µg/ml having various shapes and sizes inhibit the venom activities of cobra in blood systems. Thus in our work the activity studies of T. indicum against the cobra venom has confirmed inhibitory effects in in vitro models. This might be due to secondary metabolites that are present in T. indicum plant, which are active and might explain the bioactivity of the extract. However more of additional in vivo inhibitory studies are required in identifying the metabolites for the requirement of human beings.

INTRODUCTION: Nanobiotechnology is one of the dynamic disciplines of research in contemporary material sciences. Where the medicinal plants and different plant products are finding an imperative use in the synthesis of nanoparticles (NPs).

It is the novel and enhanced characteristics such as size, distribution and morphology have been revealed by these particles in comparison to the larger particles of the mass material that they have been prepared from NPs 1.

The nano particles are well recognized metals like gold, silver, mercury and platinum to have significant applications in electronics, magnetic, optoelectronics and information storage 2. The production of nanoparticles is mainly through three methods i.e., Chemical, physical and biological. Biological methods of nanoparticles synthesis using microorganisms, enzymes, and plant or plant extract have been suggested as possible ecofriendly alternatives to chemical and physical methods 3. They are also broadly applied in shampoos, soaps, detergents, cosmetics, toothpastes, medical and pharmaceutical products and are hence directly encountered in daily uses by human systems 4. India is a rich source for variety of medicinal plants growing under different geographical and ecological conditions have reported the medicinal values. The humans have depended on nature for their fundamental needs namely food, clothing, medicines, and natural healing remedies. This reliance led to the people living in synchronization with nature to develop a system of knowledge about plants, which play several important functions in human life 5. Snakebites represent a severe medical, social, and economic challenge in many parts of the world, mainly in tropical and subtropical nations. Majority of the world’s dangerous snakes are found in developing countries, where access to treatment is limited 6. Snakebite is declared as a “Neglected Tropical Disease” by the World Health Organization. This result, may be considered as a matter of global health concern for the people in general and the rural communities of the developing countries 7.

In addition to rich plant sources India is also a rich assortment of snake fauna, of which only 242 species have been identified including 57 poisonous or harmful species. The four major species of snakes in India known as “Big four” are considered responsible for life-threatening envenomation around the country. These include Indian cobra (Naja naja), the common krait (Bungarus caeruleus), the Russell’s viper (Daboia russelii) and the sawscaled viper (Echis carinatus). Although many other species of venomous snakes, for example, Indian Banded Krait (Bungarus fasciatus), Naja kaouthia, N. oxiana, N. sagittifera, Echis sochureki, Hypnale hypnale, are also responsible for fatal and or mild envenomation in different parts of India 8. Snake venoms are complex mixture of enzymatic and toxic proteins, which include phospholipase A2 (PLA2s), myotoxins, hemorrhagic metalloproteinases and other proteolytic enzymes, coagulant components, cardiotoxins, cytotoxins and neurotoxins 9.

In our study we had selected one of the medicinal plant i.e., Trichodesma indicum R. Br. belongs to the family Boraginaceae. It is commonly known as Adhapushpi. This is a perennial medicinal herb distributed in tropical and subtropical Asia, Africa and Australia. The whole plant traditionally used as a carminative, laxative, diuretic, depurative and febrifuge. Flowers are sudorific and pectoral, and Leaves depurative. Leaves and flowers are edible 10. The leaves and roots are effective against snake bites, urinary diseases and used as diuretic. The leaf paste of T. indicum is used to treat stomach disorders, intestinal worms in cattle, the treatment of mastitis and for uterine prolapse 11.

Collection, Preparation and AgNP Synthesis of the Extract: The Indian medicinal plant, Trichodesma indicum, was collected from Sri Venkateswara University campus Tirupathi, India. It was authenticated by Taxonomist, Department of Botany, S. V. University, Tirupati. The voucher no. 0214 and specimen kept in Department. Fresh and healthy plants were collected and rinsed thoroughly with tap water followed by distilled water to remove all the dust and unwanted visible particles.

Each part of the plant separated, like, stem, root, flower etc. and were cut into small fine pieces and shade dried at room temperature. About each of these finely incised leaves and stem of the plant type were weighed separately and transferred into beakers containing 1000 mL of distilled water and boiled for about 20 min. The extracts were then filtered thrice through Whatman No. 1 filter paper to remove particulate matter and to get clear solutions which were then refrigerated (4 °C) for further experiments.

In the typical synthesis of silver nanoparticles, 100 mL of leaf and stem extracts “10 mg” were treated with 900 mL of 1 mM silver nitrate solution and then stored at room temperature. The reactions were carried out in darkness (to avoid photoactivation of AgNO3). Subsequently the synthesis of silver nanoparticles was initially identified by brown colour formation and further monitored by measuring UV-Vis spectra of the reaction mixture 12.

Prepartion of RBC Cells from Human Blood: Human blood was collected in glass tubes containing citrate as anticoagulant. The blood samples were centrifuged at 800 rpm for 10mins and plasma was carefully removed. The pellet of red blood cells were washed thrice using PBS buffer (0.15M NaCl,10 mM phosphate buffer pH 7.0) and then suspended in a fresh PBS buffer at a density of 1.2 × 109 cells / mL monitored by a Neubauer chamber. To this 1% of egg albumin was added 13, 14 and the resultant mixture was considered as substrate to snake venom PLA2s in the haemolytic assay.

Blood Agar Diffusion Method: Petriplates and other requirements were wrapped in paper and autoclaved to maintain sterile sources before to the experimentation. The blood cells prepared above was added to the nutrient agar after autoclaving and cooling to 45 ºC, and poured in to the plates in laminar air flow and allowed to solidify. After solidification, wells were made by using sterilized glass tube. The wells were loaded separately with the venom in one plate, PBS as control in one plate, plant extracts of leaf and stem on each plate to observe protective action of plant extract against venom, in one plate. The zones formed after 24 hrs were measured for each plate and recorded.

Haemolytic Activity: The venom was pre-incubated with various concentrations of extracts for 1hour at 37 ºC. Hemolytic inhibition was determined as Boman and Kaletta, 1957 15, with slight modifications of Gopi et al., 2016 16.

Hemolytic Inhibition: Snake bite causes haemolysis which is one of the important contributing factors of snake poison. The enzyme PLA2 present in venom acts on the human red blood cells (HRBC) membrane associated phospholipids in liberating lysolecithin and causes haemolysis 17.

Enzymatic inhibition studies revealed that the T. indicum extract of the AgNP was able to inhibit, phospholipase A2 Table 1 and hemolytic enzymes present in the cobra venoms. The active principles present in extract is able to inhibit these toxic enzymes in venoms at 10 μg/mL concentration. Our study, further demonstrated capability of the T. indicum extract, to stabilize red blood cell membrane, which is an indication ability to prevent rupture, or haemolysis in hypotonic-stress induced condition. The plant secondary metabolites such as flavonoids, quinonoids, xanthenes, polyphenols and terpenoids, which posesses protein binding and enzyme inhibiting properties can inhibit snake venom PLA2 18. The in vivo screened active methanolic extract was further tested for direct inhibitory activity on Naja naja snake venom major enzymes like; acetyl cholinesterase, hyaluronidase, ATPase, protease, and hemolytic activities 19.

Again the another medicinal plant Azadirachta indica leaf methanolic extract (Meliaceae) shows the inhibition against the Naja naja 20. The N. naja venom has been found to have a higher hyaluronidase activity when compared to Russell venom 21.

Blood Diffusion: To analyze blood cell hemolysis by venom agar plate diffusion studies were conducted. From the Fig. 1 it is clear that cobra venom has showed the activity which is known to form the zones of lysed blood in blood agar medium. In this assay the three different concentrations i.e., 10, 20 and 30 μg / ml were tested. The inhibition for cobra was found for leaf and stem extract at 10 μg/ml and 20 μl concentrations. The zone of diameter was measured in different concentrations, among all the concentrations stem and leaf showed the protection from venom. Earlier studies of Yingprasertchai et al., 2003 22 has revealed the presence of myotoxic PLA2 and other cardiotoxins in N. naja venom that cause cellular necrosis, cytotoxicity and cardiac arrests. These are inhibited by the aqueous leaf extract of Witlania somnifera. It is due to the glycoprotein as responsible for this activity 23.

The blood discs which had been impregnated with a series of leaf and stem extracts were placed on agar surface. The agar plate was then incubated at 37 °C for 18 to 24 h. After the incubation, the plates were examined for inhibition zone. The inhibition zone was then measured. The test was repeated three times to ensure reliability. Then the blood agar plates were taken for fluorescent microscopy and observed the changes with which was taken with Naja naja and T. indicum plants Fig. 2. The absence of dye and the changes were observed under the fluorescence which was seen in blood agar slides Fig. 2 and 3. 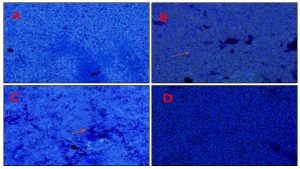 A) Control: Cells are intact and not lysed as that of venom

B) Cobra venom + leaf extract: The arrows represents the grouping of cells

D) Cobra venom + stem extract: The cells of the stem extract treated sample lost their shape and has become as Oval. 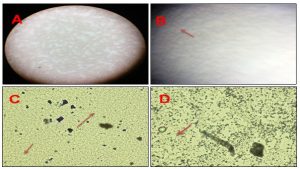 FIG. 3: MICROSCOPY OF RBC IN THE ABSENCE OF DYE AND FLUORESCENCE

A) Control: cells were normal and intact in freshly prepared slide

C) Cobra venom + leaf extract: the arrow mark represents that the cells were lysed and ellipsoid

CONCLUSION: The present study concluded that the sliver nanoparticles prepared biologically  from T. indicum against cobra venom were studied using SEM, FTIR and DLS. The neutralization parameters of snake venom have shown positive results with respect to T. indicum nanoparticle. More findings on this plant  would be helpful for  finding alternative treatment for potential inhibitors of toxins.