INTRODUCTION: In developing countries, microorganisms are frequently a cause of prevailing diseases, presenting a serious public health issue in a significant segment of the population as uncovered by either private or official health care systems. Infectious diseases or transmissible diseases comprise clinically evident illnesses which are of characteristic medical signs and or symptoms of disease resulting from the infection, presence and growth of pathogenic biological agents in an individual host organism.

Infectious diseases that are especially infective are sometimes called contagious and can be easily transmitted by contact with an ill person or their reactions. Infectious disease results from the interplay between those few pathogens and the defences of the host they infect 1. Medicinal plants contain physiologically active principles that over the years have been exploited in traditional medicine for the treatment of various ailments 2. Indigenous herbal remedies are widely used against many infectious diseases, but only few of them have been scientifically investigated with their active components isolated and characterized 3. In modern medicinal practice, the alarming world wide evidences of antibiotic resistance causes and increasing need for new compounds that can act either by inhibiting resistance mechanism of microorganisms of medical importance 4. Bacterial resistance is beyond doubt the consequence of years of widespread indiscriminate use, incessant misuse and abuse of antibiotics 5.

The most common side effects from antibiotics are diarrhoea, nausea, vomiting. Fungal infections of the mouth, digestive tract and vagina can also occur with antibiotics because they destroy the protective good bacteria in the body as well as the bad ones responsible for the infection being treated. Medicinal plant products when compared with their synthetic counterparts minimize the adverse side effects. The global interest in therapeutic potential of phytochemicals during the last few decades is therefore quite obvious. Plants have a great potential for producing new drugs for human benefit. There is a continuous development of resistant strains which pose the need for the search and development of new drug to cure diseases 6.  Systematic screening of them may result in the discovery of novel effective antimicrobial compounds 7. Ethnobotanical and ubiquitous plants serve as a rich resource of natural drugs for research and development 8. Secondary metabolites are frequently accumulated by plants in smaller quantities than primary metabolites.

The present study states that the use of locally and commercially available medicinal plants such as Acalypha indica, Adhatoda vasica, Azadirachta indica, Cynodon dactylon and Withania somnifera to analyse their effect on pathogenic bacterial organisms. These plants are considerably useful and economically essential. They contain active components that are used in the treatment of many human diseases9. There is a high level of positive correlation between the traditional medicinal use off the plants and the current therapeutic use of the chemical extracted from the plant. Numerous studies have been conducted with the extracts of various plants, screening of antimicrobial activity as well as for the discovery of new antimicrobial compounds 10.

Extraction: The medicinal herbal plant leaves and root extracts were obtained by Soxhlet’s apparatus. For this extraction ethanol solvent was used. After extraction, the solvent was removed by condensation of the extracts.

Collection of Biosamples: 25 biosamples were collected from clinically suspected patients of various Hospitals, Medical Colleges and Social Welfare Centres of Thanjavur. All the patients were thoroughly evaluated by detailed history, clinical examination and biochemical parameters. All the strains were confirmed by cultural characteristics and maintained in slants for further use.

Antibacterial susceptibility test: Agar well diffusion assay is used widely to determine the antibacterial activity of   crude extract containing unknown components. Nutrient agar was prepared and poured in petridishes. 24 hours growing culture such as Bacillus subtilis, Escherichia coli, Klebsiella pneumoniae, Pseudomonas aeruginosa and Staphylococcus aureus were swabbed on it. The wells about 8mm in diameter were made by using cork borer. The different concentrations (10µl, 25µl and 50µl) of the crude extract were loaded in the wells. The plates were then incubated at 37o for 24 hours. The diameter of inhibition zones was measured.

The results of the phytochemical analysis shown in Table 2 represented that the medicinal plants showed positive results for saponins, flavonoids, glycosides, phenolic compounds, fixed oils and fats, alkaloids and protein and amino acids. 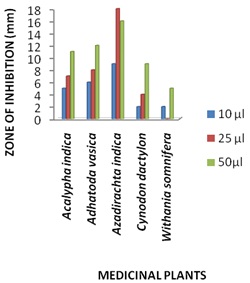 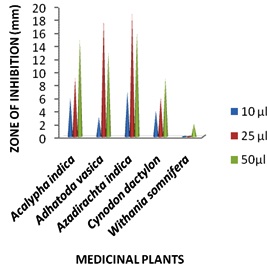 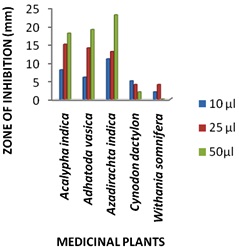 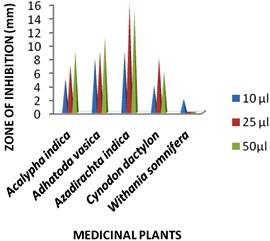 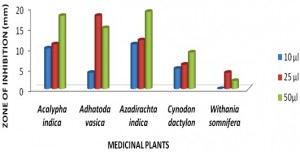 Many antibiotics are used nowadays to control the diseases. The increased awareness of the environmental problems associated with these antibiotics has led the search for nonconventional chemicals of biological origin, for the management of disease. Bactericides of plant origin can be one approach to disease management because of the eco-friendly nature 13. Screening is important not only for therapeutic efficacy of the medicinal plants, but also for the validation of their historical utilization by traditional healers and herbalists.

The present study is an attempt to evaluate plans as source of potential chemotherapeutic agents and antimicrobial activity 14. The search of novel bioactive compounds including antimicrobial ones continues.  This is largely so because some pathogens have developed resistance to certain currently used drugs and some disease have yet to be treated chemotherapeutically 15. Such screening of various natural organic compounds and identification of active agents is the need of the hour because successful prediction of lead molecule at the onset of drug discovery will pay off later in drug development. Medicinal plants are necessity for the scientific point of view, to establish a rational relationship between chemical biological and therapeutical activities of folklore medicine 16.

Our study stated that the antimicrobial activities of A. calamus due to the presence of the following phytochemicals namely, Tannins, Saponins, flavonoids, anthraquinones, fixed oils and fats, Alkaloids, carbohydrates, protein and amino acids and phytosterols. The potential of antimicrobial properties of plants are related to their ability to synthesize compounds by the secondary metabolism 17. A. vasica showed that the presence of tannins, saponins, flavonoids, phenolic compounds, fixed oils and fats, alkaloids and carbohydrates, protein and amino acids in the leaves of A.  vasica.

It has also been shown that tannins are biologically active, against E. coli, S. aureus, S. paratyphi and C. albicans 18. These classes of compounds in the bark extracts are known to show curative effects against several pathogens. The principal active medicinals are asclepin and mudarin. The antimicrobial activities of methanolic extracts of C. procera showed highest antimicrobial activity against various phytopathogens 19.

The main constituents of Ashwagandha are alkaloids and steroidal lactones. Among the various alkaloids, withanine is the main constituent. The other alkaloids are somnifera, somnine, somniferinine, withananine, pseudo-withanine, tropine, pseudotropine, cuscohygrine, anferine and anhydrine. Two acyl steryl glucoside viz. sitoindoside VII and sitoindoside VIII have been isolated from root. The leaves contain steroidal lactones, which are commonly called withanolides. Studies also reveal ashwagandha to be a potential antimicrobial agent, with antifungal activity and moderate antibacterial activity against S. aureus and P. aeruginosa 21.

CONCLUSION: To conclude that, this study would definitely create awareness among the infectious patients for taking control or preventive measures based on herbal plants against the common infectious bacterial pathogens. However, due to changing pattern of infections depending upon the degree of immunosuppression, constant monitoring of infections in HIV positive population is important for better management and to improve the quality of life of such patients. Alternative to antibiotics, the patients should be recommended to take the herbal based medicines surely minimize the bacterial related infections and increase the life span of the patients. Thus, this study is a scientific validation for the therapeutic use of these plants and it suggests that the synergistic studies can be further extended to other plant sources to enhance their curative properties.