ABSTRACT: Launaea taraxacifolia is a leaf vegetable consumed in several African countries including Nigeria, Ghana and Benin. It is eaten as salad, sauce and infusion to fight against certain diseases including liver diseases, diabetes and hypertension. The hydroethanolic extract of Launaea taraxacifolia leaves is rich in polyphenols (phenolic acids, flavonoids and tannins catechists) and would have antioxidant and hypolipidaemic activities. In this work we studied the effect of the hydroethanolic extract of the plant on blood sugar, cholesterol and triglycerides levels in Wistar rats. We also examined the effect of treatment on liver and kidney histology of treated rats to detect possible cytotoxic effects. Three groups of five Wistar rats were used for daily treatment during 15 days. The first group of control rats received water, the second group received 300mg per kg of body weight of extract and the third group received 500mg per kg of body weight. Our results showed that the doses of the extract used have no effect on blood glucose in rats. By cons we note a significant lowering effect on cholesterol and triglycerides levels by comparing the blood lipids levels in the control and treated rats. The hepatic and renal histology showed no visible atypia. Considering the direct link between cholesterol, triglycerides and heart diseases, regular consumption of Launaea taraxacifolia leaves may help to prevent cardiovascular diseases.

INTRODUCTION: Launaea taraxacifolia (L. taraxacifolia) is a leafy vegetable of the family Asteraceae (Compositae) that is present in several African countries including Ghana, Senegal, Benin and Nigeria.

Apart from their use as a food, L. taraxacifolia leaves are widely used in the form of infusion for the treatment of several diseases including liver diseases, dyslipidemia, diabetes, high blood pressure 1, 2, 3. Our previous works as well as others researches have shown that L. taraxacifolia leaves extracts contain as major metabolites polyphenols (phenolic acids, flavonoids and tannins catechists) 4, 5. Our research has also demonstrated significant antioxidant and lipid-lowering activities which are confirmed by previous work 4, 6. These antioxidant and lipid-lowering activities would be due to the presence of polyphenols and sterols in the leaves of Launaea taraxacifolia. The radical scavenging activity of phenolic acids and flavonoids has been reported in several studies 7, 8, 9, 10. Oxidative stress is responsible for the onset or complication of several non-communicable diseases including cardiovascular diseases, diabetes and cancer. It is the unbalance between reactive oxygen species (ROS) and antioxidant molecules which leads to cell disorder via the attack of macromolecules such as proteins, nucleic acids and lipids 11. Free radicals oxidize LDL, which are swallowed by macrophages which turn into foam cells that are the basis for the formation of atherosclerotic plates in blood vessels. These plates induce the onset of cerebral vascular events and heart attacks 12, 13, 14. Free radicals can induce on nucleic acids, oxidative and mutagenic effects or stop replication. They act by causing bases alterations, DNA-protein bypass and strand breaks causing serious diseases including cancer 15.

In diabetics, oxidative stress causes the phenomenon of glyco-oxidation contributing to the fragility of their vascular walls and their retina inducing vision problems and cardiovascular accidents 16. Hypercholesterolemia is characterized by an increased number of circulating small dense LDL particles 17, 18, themselves are associated with the development of the atheromatous plate (since these particles have highly atherogenic properties) that directly leads to cardiovascular complications 19. Indeed, small dense LDL particles remain longer in circulation, infiltrate more easily in the membrane of the endothelial wall, adhere to the adhesion molecules, are more susceptible to oxidation and bind to receptors  " scavengers "of macrophages. The direct link between a high rate of triglycerides in the blood and cardiovascular diseases has also been demonstrated 20, 21.

The hypolipidaemic and the antioxidant activities of hydroethanolic extracts of Launaea taraxacifolia leaves could play a fundamental role in the prevention and the cure of non-communicable diseases such as cardiovascular diseases, diabetes and cancer. The results obtained on cell lines therefore need to be confirmed in vivo. That is why we have undertaken to study hypoglycaemic and hypolipidaemic activities of plant extracts on Wistar rats.

Collection of L. taraxacifolia plants: L. taraxacifoliaplantswere collected in the month of May, 2015 from Dassa Zoume a small city in center of Benin. A specimen was deposited in the National Herbarium of the Department of Botany, Abomey-Calavi University. Samples were dried in shade at roomtemperature (25°C) until stabilization of their mass and then pulverized into coarse powder.

Animal Material: The experimental animals are male and female Wistar rats weighing between 150 and 250 g. All animals have health status of SPF (specific pathogen Exempt). Work on wistar rats were authorized by the national committee of ethics of Benin science Academy. Upon receipt, the rats were randomly placed in groups of five (5) in standard cages for a period of acclimatization (2 weeks) before being used in various experiments. During this period the animals had free access to food and water and remained kept at constant temperature (22 ± 2) ° C. They were subjected to a light / dark cycle 12h / 12h. The dark phase of the cycle begins at 12h and different experiences have always been held from 11AM to 6 PM due to the nocturnal activity (active phase) of rats.

taraxacifolia leaves extraction: All samples were ground in a commercial coffee grinder for extraction. The mixture ethanol-water 50% (v/v) was used as extraction solvent. The extract was concentrated in vacuo using a rota vapor and the yield (Y) was calculated by the formula below:

Blood sampling and rats weighing: Blood sampling and rats weighing took place on day = 0 and day = 15 before and after fifteen days treatment with hydroéthanolic extract of Launaea taraxacifolia. Regarding sampling, 2 ml of blood were taken with hematocrit tube through the retro-orbital sinus of rat eyes. Blood were collected in dry tubes and were immediately centrifuged at 4000 rpm for 10 minutes at 10°C for the analysis of biochemical parameters.

Determination of glucose concentration in the blood: It is a colorimetric assay following two coupled enzymatic reactions. A closely specific enzymatic reaction (glucose oxidase) oxidizes glucose present in the sample to gluconic acid and hydrogen peroxide. It serves as the substrate for the peroxidase in a coupled reaction resulting in the oxidation of o-dianisidine to a colored product. The intensity of the color is proportional to the glucose concentration. A capsule of enzymes (glucose oxidase-peroxidase) is dissolved in 100 ml of water followed by 1.6 ml of solution of o-dianisidine. The reagent is ready to use and can be kept several days in the refrigerator. We conducted a blank tube containing only distilled water (20μl), two standard tubes containing 20μl of glucose (1 g / l). And then we have prepared two tubes each containing 20μl of supernatant (blood plasma) for each sample. 2 ml of reagent was then added into each tube and all placed in an oven at 37 ° C for 10 minutes.

After steaming completed, the absorbance was measured by spectrophotometry at 470 nm, taking as zero the white tube. We kept the average of the two values for duplicate tubes when they are compatible. The glucose concentration is found with the following calculation: [G] = Do / Dsg x Csg,

Determination of triglycerides concentration in the blood: 22 The triglyceride samples were incubated with the lipoprotein lipase (LPL) and glycerol and fatty acids were released. Glycerol was converted to glycerol 3-phosphate (G3P) and adenosine-5-di phosphate (ADP) by glycerol kinase and ATP. Glycerol 3-phosphate (G3P) was then transformed with glycerol phosphate dehydrogenase (GPO) to dihydroxyacetone phosphate (DAP) and hydrogen peroxide (H2O2).  Hydrogen peroxide (H2O2) reacted with 4- amino-antipyrine (4-AP) and p-chlorophenol in the presence of peroxidase (POD) to give a red color. The intensity of the color formed is proportional to the amount of triglycerides contained in the serum sample. The absorbance was measured by spectrophotometry at 505 nm, triglycerides concentration is given by the formula:  Tryglycerides rate (g/l) = (DOD / DOE) x 2; DOD = absorbance of samples, DOE = absorbance of standard.

Rats liver and kidney histology: After the dissection, liver and kidney were removed, fixed in buffered formalin, and embedded in paraffin. The specimens sections (5 µm) were mounted on glass slides, deparaffinated, and hydrated. For histological analysis, sections were stained with hematoxylin and eosin (H&E), following a standard protocol 24. The pictures were taken at 40X magnification. 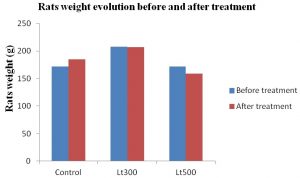 FIG. 1: AVERAGE WEIGHT OF RATS BEFORE AND AFTER TREATMENT 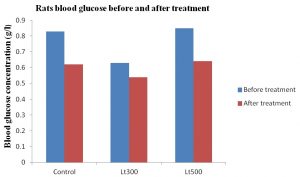 FIG. 2: WISTAR RATS BLOOD GLUCOSE CONCENTRATION BEFORE AND AFTER TREATMENT

Comparing blood glucose concentration of treated rats with control rats we noticed that there were no significant differences. We can deduce that the doses of extracts used have no effect on blood sugar levels in rats. These results are not consistent with those reported by some authors that showed hypoglycemic activity of Launaea taraxacifolia extracts 7, 27. However, even Launaea taraxacifolia extracts do not have a direct effect on the glucose level in the blood, the antioxidant activity due to the presence of polyphenols 28, 29 and lipid-lowering effect of the extracts, could help to prevent complications of diabetes and possibly prevent type 2 diabetes in subjects. The role of the accumulation of fat, dyslipidemia and oxidative stress in onset and complication of diabetes is well known 30, 31. 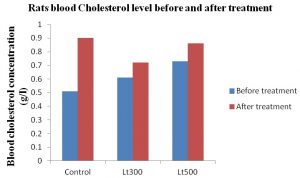 FIG. 3: WISTAR RATS BLOOD CHOLESTEROL CONCENTRATION BEFORE AND AFTER TREATMENT 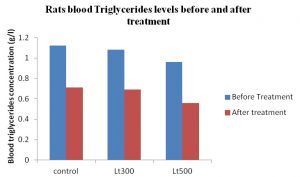 This result is consistent with our previous results that demonstrated lipid-lowering effect of hydroethanolic extracts of Launaea taraxacifolia leaves on HepG2 cells 4.

Liver histology: The treatment with 1 ml of L.taraxacifolia extract at 300 mg/Kg (Fig. 5B) or 1 ml of L.taraxacifolia at 500 mg / Kg (Fig. 5C) did not alter the liver parenchyma. Hepatocytes as in the control rats (Fig. 5A) are arranged in radial blades around the central vein. Sinusoids with typical appearance between the hepatocyte bays were visible. Cellular atypia were not observed. This result is similar to that obtained with Solanum macrocarpon Linn, a medicinal plant used in Benin to lower cholesterol 38 and is consistent with our previous results that has demonstrated that only a very high doses of L.taraxacifolia could be toxic 4.

In controls rats (Fig. 5A), hepatocytes were arranged in radial blades around the central vein (V). The sinusoids (S) have typical appearance. The parenchyma did not significantly change in rats treated with L.taraxacifolia extract at 300 mg/Kg (Fig.5B) or 500 mg /Kg (Fig.5C).

Kidney histology: The treatment with L.taraxacifolia extract at 300 mg / Kg (Fig. 6B) or 500 mg / Kg (Fig.6C) did not alter the cortical parenchyma. Just as in the control rats (Fig. 6A), the cortex has typical glomeruli, proximal and distal tubules. The parenchyma did not appear visible cellular atypia. It is the same for the renal medulla, which shows the same appearance for controls (Fig. 6D) and treated with low (Fig. 6E) or high dose (Fig. 6E). Collecting ducts are clearly identifiable. 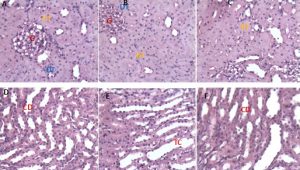 FIG. 6: A, B AND C: KIDNEY CORTEX OF CONTROL AND TREATED RATS. The renal cortex of control rats (Figure 6A), rats treated with 1 ml of 300 mg / Kg of L.taraxacifolia extract (Figure 6B) or with 1 ml of 500 mg / kg (Figure 6C) have the same characteristic architecture with glomeruli (G), proximal tubules (PT) and distal tubules (DT).

CONCLUSION: The leaves of Launaea taraxacifolia can be consumed to reduce cholesterol and triglycerides in the blood and thereby help to prevent obesity and cardiovascular diseases without risk of toxicity.

CONFLICT OF INTEREST: We certify that this manuscript is not under any conflict of interest