ABSTRACT: Background: Urinary tract infection is a common medical problem for women throughout their lifetime. Recurrence after urinary tract infection (rUTI) is common in adult women. The majority of recurrences are believed to be reinfection from extra urinary sources such as rectum or vagina. The treatment of recurrent urinary tract infection also inflicts an economic burden on the patient’s life. Hence, we must use an effective antibiotic that prevents the recurrence of UTI and improve the functional capacity and quality of life in women. This study aims to study the effectiveness of different antibiotics in increasing the functional capacity and reducing the economic burden in UTI women. Methodology: This is a prospective, observational study, conducted in a total of 50 patients at General Medicine Department of a tertiary care hospital in Coimbatore for a period of six months. The patient demographic details were collected from the medical records or direct patient interview. Urine analysis, urine culture and antibiotic sensitivity reports were also collected and entered in the data collection form. The functional capacity and quality of life scores before and after antibiotic administration were calculated using the Leicester Impact scale. Results: The study shows that the urinary tract infection mainly affects women between the ages 55 and 65 yrs. Escherichia coli is the principal microorganism that causes urinary tract infection the most and the major risk factor is menopause(24%) and the least risk factor is urosepsis (10%). Mostly prescribed antibiotic is combination of Cefoperazone and Sulbactam and its recurrence rate is 4%. Conclusion: From the study, it is concluded that amikacin is the most cost effective medication with no recurrence rate and with a mean number of days of hospital stay of four days

INTRODUCTION: Urinary tract infection (UTI) is the presence of greater than 105 bacteria per milliliter of urine. The organisms have potential to invade tissues of urinary tract. Infection may be limited to growth of bacteria in urine, which frequently may not produce symptoms.

Urinary tract infections (UTIs) present as several syndromes associated with an inflammatory response to microbial invasion and it ranges from asymptomatic bacteriuria to pyelonephritis with bacteremia and sepsis. UTIs are designated as uncomplicated or complicated.

Uncomplicated infections occur in individuals who lack structural or functional abnormalities of the urinary tract that interfere with the normal flow of urine or voiding mechanism. These infections occur in females of 15 to 45 yrs of age. Complicated UTIs are the result of a predisposing lesion of the urinary tract such as congenital abnormality or distortion of the urinary tract, a stone, prostatic hypertrophy, obstruction that interferes with the normal flow of urine and urinary tract defenses1. UTIs are the most common bacterial infection in any part of urinary system-kidneys, ureters, bladder and urethra and accounts for 8 million patient visits annually. Most infections involve the lower urinary tract-bladder and urethra 2. Women tend to get more bladder infections than men 3. This is because women have shorter urethra, so it is easier for the germs to move into the bladder. Having sex can make easier for germs to get into urethra and women will get infection if they do not drink enough fluids 3-4.

The prevalence of bacteriuria in females and males of this age group is 4.5% and 0.5% 7. Before puberty, the prevalence is approximately 1% with 5% of females reported to have significant bacteriuria prior to leaving high school. This percentage increases to 1% to 4% after puberty in non-pregnant females as a result of sexual activity. Approximately 1 in 5 women will suffer a symptomatic urinary tract infection 8. In elders, the ratio of bacteriuria in women and men is approximately equal. The rate of infection increases who are in nursing homes 9.

The Quality of life (QOL) of patients is evaluated with Leicester impact scale. It measures the impact of urinary symptoms. It is used to determine the impact of urinary problems on daily activities and on mood and behavior. The scale consists of 21 questions with a minimum score of 0 and maximum score of 2. The Leicester impact scale is divided into four ranges: 0-14, 15-20, 21-30 and 31-42. A score of >14 indicates that the patient had some degree of functional or social handicap (mild), a score of >21 indicates a major social or functional handicap (moderate) and a score of >31 indicates severe social and functional handicap (severe).

Escherichia coli (52%) is the particular microorganism which affects the urinary tract infection. Menopause (24%) is the major risk factor for urinary tract infection. Urgency (58%), burning micturition (50%), and suprapubic heaviness (34%) are the main symptoms of UTI. The first line treatment for UTI is combination of Cefoperazone and Sulbactam.

Management of women with frequent symptomatic recurrent UTI can be vexing for both patients and physicians. For the patients, each UTI recurrence is associated with days of urinary tract symptoms, general malaise, restrictions on everyday activities, therapy costs, and also a loss in the professional front too. The patients suffering from recurrent urinary tract infections can be treated safely and effectively with continuous antibiotic prophylaxis, post-coital therapy or self initiated therapy. Since recurrent urinary tract infection affects women in all fronts of their life, it is very essential to prevent the recurrence of UTI. The treatment of recurrent urinary tract infection also inflicts an economic burden on the patient’s life. Hence, we must use an effective antibiotic that prevents the recurrence of UTI and improve the functional capacity and QOL of the women. This study aims at studying the prescribing pattern of UTI in a tertiary care hospital and also to assess the effectiveness of antibiotics in improving functional capacity and quality of life in women.

This study is done as a prospective, observational study. The study was conducted after obtaining ethical approval from the Institutional Ethical Board of the terticary care hospital in which the study was conducted.  The study was carried out in the General Medicine Department for a period of six months. The patients were included into the study if they satisfy the inclusion criteiria – females greater than 15 years of age, dianosed with UTI, have positive urine culture, and is prescribed at least one antibiotic. Informed consent was obtained directly from the included patients or from their caretakers. The patient demographic details were collected from the medical records or from direct interview with the patient and was entered into the data collection form prepared exclusively for this study. Urine analysis, urine culture, and antibiotic sensitivity reports were collected. The functional capacity and QOL scores before and after antibiotic administration were calculated using the Leicester Impact scale.

Of 50 patients included in the study, majority of the patients belong to the age group of 55-65 years with mean age being 55. The following Fig.1 shows age wise distribution of the study subjects 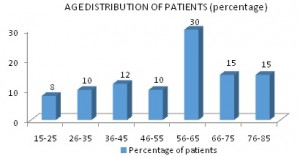 The most predominantly isolated pathogen from urine culture is found to be E. coli (52%) followed by Klebsiella pneumoniae (24%), Enterococcus species (8%) and Candida albicans species(4%). The following Fig.2 shows distribution of patients based on microorganism isolated from urine culture. 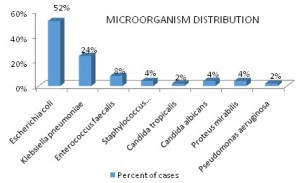 Based on risk factors, it was found that menopause was the most common risk factor for UTI with 24% of the patients with menopause getting UTI followed by diabetes mellitus (22%), catheterization (17%) and renal impairment (15%). Fig.3 shows distribution of patients on the basis of risk factors for UTI. 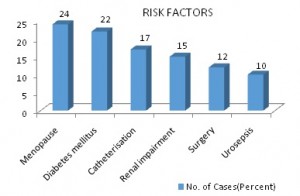 The following Fig.4 shows the information on where the UTI patients get the infection from. It shows that 70% of the UTI cases are acquired from the hospital.

FIG.4: UTI PATIENTS GET THE INFECTION

TABLE 3: MEAN FUNCTIONAL CAPACITY & QOL SCORES BEFORE AND AFTER DIFFERENT ANTIBIOTIC ADMINISTRATION AND THE MEAN DIFFERENCES

TABLE 5: NUMBER OF PRESCRIPTIONS AND THE RECURRENCE RATE OF THE ADMINISTERED ANTIBIOTICS

The antibiotics are selected based on the antibiotic sensitivity report. The recurrence rates are given in Table 5. The recurrence rates for the administered antibiotics are as follows: Cefoperazone + sulbactam (4%) which is followed by amoxicillin + clavulanate (2%), ofloxacin (2%), cefuroxime (2%), fluconazole (2%), linezolid (2%) and TMP/SFX (2%). The recurrence of UTI depends upon the uropathogen, its sensitivity to the administered antibiotic and also the resistance pattern and the risk factors of the patient. A study by Enrique Patricio Ubertazzi et al.,11 cited that 50% of women experience at least one UTI in their lifetime; 25% and 44% of these patients will suffer recurrence of infection within 6 months and 1 year respectively. Table 4 depicts the cost analysis of antibiotics used in the present study. Antibiotics of varying costs are administered.