ABSTRACT: The radioprotective effect of Aloe vera was studied in liver of Swiss albino mice. Animals were divided into three groups. Animals of group I administered double distilled water only, group-II Aloe vera (drug) and control set of group III were given radiation only where as animals experimental set of group III were administered by Aloe vera + Radiation. Animals were given Aloe vera leaf extract orally 1000 mg/kg body weight/day for 15 consecutive days before radiation exposure (4.5 GY gamma-radiation).Biochemical parameters such as LPO, GSH, protein, glycogen and cholesterol were assessed at different intervals of post-irradiation i.e. day 1 and 30. Radiation treatment showed decrease in GSH content and an increase of LPO, protein, glycogen and cholesterol observed in control set animals, however the animals of experimental group i.e. Aloe vera and radiation combined group showed a significant increase in GSH content and decrease in LPO, protein, glycogen and cholesterol but values remained below normal. Results suggest that Aloe vera modulate the radiation induced biochemical alterations in Swiss albino mice.

INTRODUCTION: In present time ionizing radiations are widely used for the treatment of cancer. Using of radiations is toxic for normal tissues because radiation produces free radicals. Radiation induced damage to normal tissues can be partially reduced by the use of radioprotectors that scavenge free radicals produced during irradiation 1. The potential application of radioprotective chemicals in the event of planned exposures or radiation accidents/incidents has been investigated 2, 3.

It has been considered possible that radiation therapy for cancer patients could be improved by the use of radioprotectors to protect normal tissues.

Photochemical including caffeine, genistein and melatoxin, have multiple physiological effects as well as antioxidant activity 4. Due to non toxic effects recently interest has increased in the development of potential drugs of plant origin for the protection against radiation effects.

In the past years different plant extracts and herbal preparations have been reported to have radio protective action such as garlic 5, ginseng 6, Podophyllum 7,Ocimum 8 and Mentha 9 have been found to have an advantage over the synthetic compounds in terms of low/no toxicity at the effective dose. Aloe vera belongs to Aloaceae family and it is a succulent plant species used medicinally for several thousands of years. It has antioxidant properties.  Latex and gel are the two important parts of Aloe vera. Latex contains potent laxatives and it is anthraquinone glycosides (Aloin, Aloe emodin) that are stronger than any other herb. It has a rich source of betacarotene, vitamin E, vitamin B complex, cyanocobalamine, SOD, proteins, iron, phosphorus, zinc, calcium, copper, magnesium, manganese, chromium, potassium, selenium, carbohydrates and essential fatty acids.

Liver plays a key role in removing excess calcium, magnesium and iron internally and also important in food digestion. Therefore, this study was undertaken to evaluate the value of nutritional supplementation of Aloe vera against the radiation induced damage on the liver of Swiss albino mice.

Male Swiss albino mice 6-8 weeks old 26±2g were used, they were given standard mice feed and water. The maintenance and handling of the animals were done according to the guidelines of the Committee for the Purpose of Control and Supervision of Experimental Animals, Ministry of Environment and Forests, Government of India. All the experimental work was approved by the institutional animal ethics committee.

Animal were treated with cobalt-60 source of radiation in radiotherapy Dept. SMS hospital, Jaipur. On exposure to radiation, animals were kept in a ventilated box and the radiation dose given to these animals were 4.5 Gy.

The Aloe vera leaf is collected locally. The specimen was placed at Herbarium, Dept. of Botany, University of Rajasthan, and Jaipur. The voucher number is RUBL-19886. Aloe vera extract is prepared by peeling, drying in powder form and these residue of Aloe vera extracted with ethyl alcohol double the volume of leaf extract and keeping at a room temperature for evaporation & this process is repeated for three times and finally kept in incubator at 37°C for complete evaporation at 24 hours, then the concentrated extract are ready for oral administration.

Animal were divided into three groups.

Group I: were administrated with double distilled water only (i.e. normal).

Lipid peroxidation (LPO): Radiation dose increase malanoaldehyde (MDA) formation, due to this level of LPO increases in control set and in experimental set Aloe vera decreases the MDA formation & provided the protection to cell membranes against free radical induce oxidative damage. So in the experimental set level of LPO is decrease as compare to control set. (Fig. 1)

In control set GSH decreases due to radiation but in experimental set it increases as compare to the control set due to Aloe vera scavenging properties. (Fig.2)

FIG. 1: LPO LEVEL (nm/mg) IN LIVER OF MICE EXPOSED TO GAMMA RADIATION WITH AND WITHOUT PRETREATED OF ALOE VERA

FIG. 2: GSH LEVEL (μM/gm) IN LIVER OF MICE EXPOSED TO GAMMA RADIATION WITH AND WITHOUT PRETREATED OF ALOE VERA

Protein: After radiation the protein increases in control set because the permeability of plasma membrane increases and amino acid transport is also extend. Treatment with Aloe vera before radiation exposure (Experimental set) provided protection to plasma membrane against free radicals. This induces alterations in its permeability, which inhibited amino acid transport and ultimately decreases the protein synthesis15 (Fig. 3) 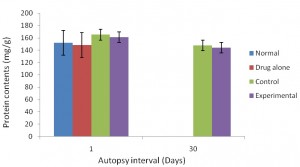 FIG. 3: PROTEIN CONTENTS (mg/g TISSUE WEIGHT) IN LIVER OF MICE EXPOSED TO GAMMA RADIATION WITH AND WITHOUT PRETREATED OF ALOE VERA

Glycogen: Increases in hepatic glycogen in control set is due to increased rate of protein catabolism & the release of substances from radiosensitive cells after radiation dose16. In experimental set Aloe vera protect the tissue proteins by disulphide formation, which in turn limit the breakdown products to enter into liver & prevent excessive glycogen synthesis. So that it is lesser as compare to control set. (Fig.4) 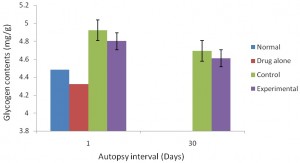 FIG. 4: GLYCOGEN CONTENTS (mg/g TISSUE WEIGHT) IN LIVER OF MICE EXPOSED TO GAMMA RADIATION WITH AND WITHOUT PRETREATED OF ALOE VERA 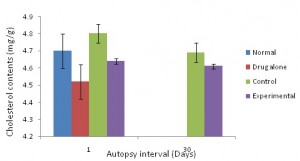 FIG. 5: CHOLESTEROL CONTENTS (mg/g TISSUE WEIGHT) IN LIVER OF MICE EXPOSED TO GAMMA RADIATION WITH AND WITHOUT PRETREATED OF ALOE VERA

DISCUSSION: Research proved that both direct and indirect radiation interactions damage the biomolecules structurally and functionally in a living system. Most of the damage is due to radiolysis of water molecules which caused by indirect action of ionizing radiation. ROS cause peroxidation of membrane lipid, oxidation of DNA, protein & several other important macromolecules in living system.

Earlier workers 18, 19, 20, 21, 22 have also reported elevated level of LPO in mice liver after whole body exposure to different doses of ionizing radiation. Thus, level of LPO gives an index of free radical activity. Antioxidants like vitamins A (β-carotene), C and E 23, glutathione peroxidase 24, several isozymes of superoxide dismutase 25, minerals such as zinc 23 and selenium 26 present in Aloe seem to be responsible for inhibiting lipid peroxidation level in liver. These results suggest that the basic cause of lipid peroxidation is not only the free radicals but also the low level of antioxidants in a biological system, which removes them.

Glutathione (GSH), a tripeptide of glutamic acid, cysteine and glycine and it is essential for protection of the cells against ROS and free radicals produced even in normal metabolism; it plays an important role in drug metabolism, radiation and cancer. In the present study GSH deplete and reach at minimum level at 1 day exposure to dose of gamma radiation. However it increases at 30 days autopsy interval in control set animal. GSH depletion does not have direct consequences in the form of acute toxicity but the cells became more susceptible to chemical or oxidative stress.

Although the level of GSH was increased in experimental set due to Aloe vera treatment before exposure to gamma radiation, which elevated the level of GSH and has important role in scavenging radiation induce free radicals & prevented suppression of GSH. GSH is essential for protection of the cells against ROS (Reactive Oxygen Species) and free radicals produced even in normal metabolism 27, it play important role in drug metabolism, radiation and cancer 28. Earlier workers have also reported that treatment with plant extracts like 29, 21, 30 to animals before exposure to different doses of ionizing radiation elevated the level of GSH.

A dose depended increase in glycogen contents was notice in liver with 4.5 Gy radiation at one day and the continuous decline was notice at 30 day autopsy but still remain higher than normal level in control set, this is due to the increase rate of protein catabolism & the release of substances from radiosensitive cells . In this study increase in glycogen contents also increased in intestine of Aloe vera treated 4.5 Gy irradiated mice at 1 day but it is significantly decreases at 30 day autopsy.

Aloe vera protected it by disulphide formation, which in turn limit the breakdown products to enter into intestine`& prevented excessive glycogen synthesis dose16. Boss and Ely (1959) suggested that glycogen deposition in liver after irradiation may be due to some more deep-seated effects, because this increase in glycogen occurs even after shielding of liver 34. They explained that general increase in rate of protein catabolism and the release of substances from radiosensitive cells are responsible for the increased hepatic glycogen synthesis after irradiation. Results of the control sets of this study are in agreement with the findings of Gould et al. (1956, 1959) who reported a decline in total cholesterol and rise in hepatic cholesterol biosynthesis after whole body irradiation. They postulated that irradiation resulted in a decrease in concentration of free cholesterol and that the decreased concentration then stimulates biosynthesis 34, 35.

In this study cholesterol increased in liver was observed at 1 day post irradiation (control set) & also in experimental set because the radiation dose enhance the activity of HMG CO-A reductase while increase was lesser in experimental set in comparison to control sets, but it decreases at 30 day autopsy because Aloe vera probably inhibited HMG CO-A reductase, which is a rate limiting enzyme of cholesterol synthesis17. So the present study suggested that the Aloe vera shows antioxidants and scavenging activity because it protected from radiation induced damage to liver of Swiss albino mice.

CONCLUSION: Results of the present study conclude that treatment of mice with Aloe extract for 15 consecutive days did not exhibit toxic effects in liver at biochemical levels and Aloe vera modulate the radiation induced biochemical alterations in Swiss albino mice.

ACKNOWLEDGEMENT: Author is thankful to the University of Rajasthan for providing research facilities and the Radiotherapy Department, SMS Medical College & Hospital, Jaipur, India for providing the irradiation facilities.