ABSTRACT: A brief study to analyze oxidative stress and antioxidant response of cadmium stress was carried out. The plant chosen Vigna radiata (var. SML-668) was hydroponically grown in 0, 50µM, 100µM and 150µM, cadmium chloride. The roots were taken from hydroponic culture at 6 days of growth for various enzymatic and metabolic esti­mations. Among the antioxidant enzymes, root catalase and ascorbate peroxidase decreased while guaiacol peroxidase and superoxide dismutase increased in response to cadmium. The lipid peroxidation and protein oxidation too increased probably due to production of active oxygen species by heavy metal stress which causes lipid peroxidation. So, Cd was definitely toxic to root system of V. radiata plants as indicated by consistent increase in peroxidation and protein oxidation. However, the plant was able to counter this partially by concomitant increase in SOD and guaiacol peroxidase. But, the other two antioxidant enzymes catalase and ascorbate peroxidase could not counter oxidative stress generated by Cd as they were decreased.

INTRODUCTION: Cadmium is a heavy and non-essential element which is released into the environment by power stations, heating systems, metal-working industries or urban traffic. Its high toxicity and large solubility in water has made it an important pol­lutant. 1 Plant Cd concentrations are between 0.05-0.2ppm, 2 but can be much higher in plants growing in contaminated soils. Heavy metals are generally involved in generation of reactive oxygen species (ROS).3  As an example, transition metals like Fe3+ and Cu2+ participate in the well-known Haber-Weiss cycle, pro­ducing HO·- from O2·- and H2O2 4.

Metals without redox capacity (such as Cd2+, Pb2+, and Hg2+) can enhance the prooxidant status by reducing the antioxidant glutathione (GSH) pool, activating calcium-de­pendent systems and affecting iron-mediated processes.1 These heavy metals can also disrupt the photosynthetic electron chain, lead­ing to O2·- and 1O2 production 5. So, hydroponic cultivation of Vigna radiata in 50/100/150 µM Cd stresses with lipid and protein peroxidation in cadmium stressed V. radiata roots were studied.

The certified seeds of Vigna radiata (cv. SML 668) were purchased from local market.

Fresh root tissue was homogenized (1:5, w/v) in ice-cold 0.1M potassium phosphate buffer of pH 7.5 and containing 3mM dithiothreitol, 1mM EDTA and 1% PVP. The mixture was centrifuged at 12000rpm for 15min at 4°C and supernatant used for enzyme assays.

Catalase (CAT) was estimated by the method of Vitoria et al (2001).7 The assay mixture was 0.1ml extract added to 1.9ml of 50mM potassium phosphate buffer (pH 7.0) containing 10mM H2O2. The decreases in absorption were noted at 240nm and quantified from extinction coefficient of 0.036 mM-1 cm-1 and activity expressed as µmol H2O2 reduced min-1 g-1 FW.

Guaiacol Peroxidase (GPX) was estimated with guaiacol as substrate according to the method of Vitoria et al (2001).7 The assay mixture was 0.1ml extract added to 1.9ml of 50mM potassium phosphate buffer (pH 7.0) containing 10mM H2O2 and 9mM guaiacol. The formation of tetraguaiacol was monitored by noting in­crease in absorbance at 470nm and quantified using the ex­tinction coef­ficient 26.6 mM-1 cm-1 and activity expressed as micro mol guaiacol oxidized min-1 g-1 FW.

Activity of Superoxide dismutase was done according to the modified method of Beauchamp and Fridovich (1971) by monitoring inhibition of photochemical reduction of nitroblue tetrazolium (NBT) to purple formazan at 560nm. The 3ml reaction mixture consisted of 2.9ml 50mM potassium phosphate buffer (pH 7.8) containing 10mM methionine, 168µM NBT, 0.025% Tri­ton X-100 and 1.17µM riboflavin, and 0.1ml enzyme. The amount of methionine-mediated formazan formed (At) was compared with amount of formazan formed in the absence of enzyme (Ac) and activity was finally reported as Units per min per mg FW. Ascorbate peroxidase was estimated by the method of Mishra et al (2006) by monitor­ing the rate of ascorbate oxidation (µ=2.8 mM-1 cm-1). The assay mixture was 0.1ml extract added to 1.9ml 50mM potassium phosphate buffer (pH 7.0) containing 0.1mM H2O2, 0.5mM ascorbate and 0.1mM EDTA. The change in absorbance was monitored at 290nm and activity expressed as µmol ascorbate oxidized min-1 g-1 FW.

Lipid Peroxidation: It was done by method of Zhang et al (2010).8 1g roots were homogenized in 5ml 0.1% trichloroacetic acid (TCA) and centrifuged at 10,000 rpm for 10 min at 4°C. To 2 ml supernatant, 2 ml of 20% TCA containing 0.67% TBA was added. The mixture was heated at 90°C for 30 min for formation of pink-colored 1:2 adduct between MDA & TBA and then quickly cooled on ice. After centrifugation at 10,000 rpm for 10 min, the absorbance of the su­pernatant at 532 nm was read, and the value for the non specific absorption at 600nm was subtracted. The concentration of MDA was calculated using an extinction coefficient of 155mM-1cm-1 and expressed as nmol g-1 FW.

Protein oxidation: The protein oxidation was assessed by estimation of carbonyl groups formed during the experiment (Mercier et al., 2004). For each sam­ple of homogenate, two equal aliquots of 0.5 ml were taken and proteins in both were precipitated by 10% trichloroacetic acid (w/v, final concentration) and centrifuged at 5000 g for 10 min. Pellet was mixed in 2ml 2N HCl and added 2mg 2,4-dinitrophenylhydrazine (DNPH) to 1ml from it. Both sam­ples were incubated for 1 h at room temperature and proteins of both sam­ples were reprecipitated with 10% TCA (w/v final concentration) by cen­trifugation at 5000 g for 10 min. The pellets were then washed twice with 1 ml of ethanol: ethyl acetate (1:1) to eliminate traces of DNPH and to solubi­lise residual lipids. Carbonyl concentration was calculated through extinction coefficient of 21.0 mM-1 cm-1 at 370 nm for protein hydrazones.

RESULTS: The plant systems face damage due to interference with uptake of many essential minerals, hampering the photosynthesis, causing oxidative stress i.e. rise in ROS (hydroxyl radicals, superoxide anions, nitric ox­ide and hydrogen peroxide) due to interference in activities of antioxidant enzymes. However, Cd stress effects germination of seeds also and manifestation of Cd stress is expected to occur as modulation of antioxidant enzymes. Higher plants can uptake Cd, depending on its availability and concentration, from soil or water; rather little is taken up directly from the atmosphere (Clemens, 2006).9 So, this study was conducted to carry out brief in vivo analysis of an­tioxidant enzymes’ behaviour in plant system.

Catalase: This enzyme from V. radiata root was suppressed with in­crease in exogenous Cd level and at all Cd levels (Fig. 1). In present study, it may be suggested that CAT activity was probably compensated by other isoperoxidases (Wu et al, 2003). 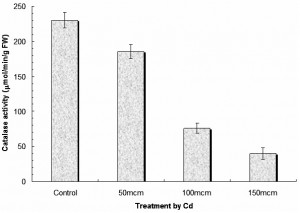 Guaiacol peroxidase: This enzyme from V. radiata root was stimu­lated by all the levels of Cd in external medium (Fig. 2). This was probably due to overproduction of AOS by Cd stress to reduce the harm­ful effect of Cd generate AOS. 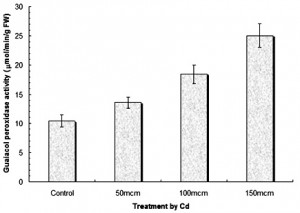 Superoxide dismutase: The superoxide dismutase of V. radiata root was stimulated by the Cd till 100µM but suppressed slightly by 150µM Cd in external medium (Fig. 3). This was probably due to that Cd has been shown to enhance lipid peroxidation (Halliwell and Gutteridge, 1989), which leads to AOS formation. 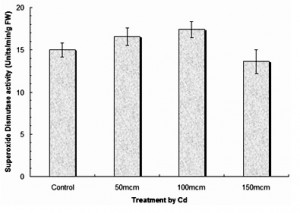 The ascorbate peroxidase was stimulated by only 50µM Cd but inhibited by the two higher levels (Fig. 4). It may be suggested that plant tolerance mechanism involve a system that remove free radicals, preventing the accumulation of O2*−, and therefore increas­ing the requirement of antioxidative peroxidases viz. ascorbate peroxi­dase. 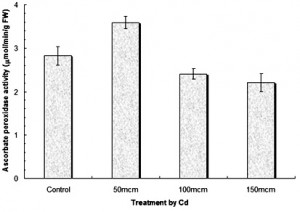 Lipid peroxidation: In present study level of lipid peroxidation con­tinuously increased with increase in exogenous Cd level throughout the studied range (Table 1). This was probably due to production of active oxygen species by heavy metal stress (Greger et al., 1995 and Lin et al., 2000).10, 11

CONCLUSION: Cd was definitely toxic to root system of V. radiata plants as indicated by consistent increase in peroxidation and protein oxidation. However the plant was able to counter it partially by concomitant increase in SOD and guaiacol peroxidase. The other two antioxidant enzymes catalase and ascorbate peroxidase could not counter oxidative stress generated by Cd as they were decreased.