INTRODUCTION: The pungent ingredient of red pepper, Capsaicin, is used topically in treatment of post-hepatic neuralgia, diabetic neuropathy and osteoarthritis 1. Capsaicin therapeutic effects are based on modification of sensory nerve endings. Capsaicin renders animals and man insensitive to further noxious stimuli after initial irritation 2. Examination of the function of sensory neurons specifically peripheral C-fibers can be mediated by capsaicin .it was found that capsaicin high doses cause desensitization to chemical stimuli, loss of neurogenic inflammation, and depletion of neuropeptides.

Analgesic (and anti-inflammatory) effects of capsaicin can be accounted for by a rapid degeneration/ destruction of sensory ganglion cell axons and/or peripheral and central axon terminals, these effects were suggested due to the rapid onset and the long duration of the antinociceptive effect of vanilloids 3, 4, 5, 6, 7.

Indeed, independent laboratories experimental data support the notion that capsaicin antinociceptive effects, administered through different routes, are associated with degenerative changes within the different domains of the nociceptive primary sensory neuron and the consequent loss of peripheral or central nociceptor specific macromolecules and receptors 4, 8. One of the most common chemo-therapeutic drugs used to treat various types of malignancies is   vincristine 9, 10. Its major dose-limiting side effect  is neurotoxicity that requires discontinuation of treatment and thus greatly affects  the survival of cancer patients 11, 12, 13 .

In this study, we investigate the degenerative effects of capsaicin on sciatic nerve by systemic repeated doses of capsaicin in vincristine induced neuropathy model through electrophysiological study and histo-pathological examination of sciatic nerve. 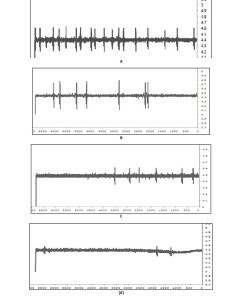 FIGURE 1: SPIKE DISCHARGES IN SCIATIC NERVE OF RAT IN RESPONSE TO :NORMAL SALINE (A), VINCRISTINE (B), CAPSAICIN (C), CAPSAICIN WITH DIRECT CAPSAICIN TITRATION ON THE NERVE (D) 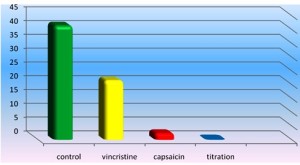 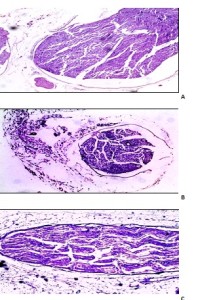 Our results were agree with 14 who found that treatment of vincristine (150µg/kg) resulted in significant decrease in sciatic nerve conduction velocity (P < 0:05, 23%) and sciatic nerve fibers with various degrees of axonal degeneration microscopically.

All of these finding showed the degenerative effect of capsaicin on sciatic nerve fibers in agree with 3, 4, 6, 7 who reported that the rapid onset and the long duration of the antinociceptive effect of vanilloids have led to the suggestion that the analgesic (and anti-inflammatory) effects of capsaicin may be accounted for by a rapid degeneration/ destruction of sensory ganglion cell axons and/or peripheral and central axon terminals.