Background: Hypertension is an immensely pervaded problem in today’s population and is a unanimous major risk factor for heart diseases. Various natural herbs have been found to control the hypertension exquisitely without causing any significant adverse effect. Eclipta alba (EA) and Boerhaavia diffusa (BD) are two herbaceous plants. EA is used to treat hepatic-dysfunction, hair diseases and anemia since ancient time. Similarly, BD is a great treatment-option for renal and urinary disorders. They have also been found quite effective in the safe treatment of hypertension. But studies in this respect are very scanty and confirmatory role of these herbs in hypertension is yet to be established. In the present study, effects of EA and BD on normal blood pressure (NBP) and hypertension were studied. Their antihypertensive activities were also compared with those of Amlodipine (Amlo).

Methods: Adult Wistar rats of both sexes, weighing 140-150 g were randomized equally to make 9 groups (6 rats/ group). First 6 groups were given high fat diet for 49 days to produce hypertension. Then drugs were given for next 45 days without stopping high fat diet. 7th, 8th & 9th groups were meant to see the effects of EA and BD on NBP; they were kept on normal diet and were given EA-200 mg/kg, BD-200 mg/kg, EA+BD (200 mg/kg of each) respectively for first 45 days. SBP (systolic blood pressure) was measured by ‘Tail-cuff method’ with the help of NIBP (non-invasive blood pressure measurement)-controller machine.

Conclusion: To conclude, EA and BD comprise significant antihypertensive activities with no harmful effects on (reduction in) NBP.

INTRODUCTION:Hypertension is a very serious and pervaded health problem in today’s population. Both clinical and epidemiologic studies have revealed that hypertension is undoubtedly a major risk factor for atherosclerosis and its complications, such as stroke and myocardial infarction. Apart from conventional allopathic measures, there must be meticulous search for alternative treatment; therefore it is evident to look for natural options & switch on to safer indigenous system of medicine like natural herbs. WHO (in 1980) has also recommended the evaluation of the effectiveness of plants in conditions where there are no safe modern drugs are available. Eclipta alba (or, Eclipta prostrata) is a perennial herbaceous plant (family Asteraceae). It grows usually in moist places as a weed throughout the world. Eclipta alba is reported to cause improvement in hair growth and color 1,  2.

This plant contains coumestans 3, i.e. wedelolactone (I) and demethylwedelolactone (II) etc. Coumestans have been found to comprise estrogenic activity. Wedelolactone has been found to express profound antihepatotoxic activity 4; it also acts as an antibacterial and anti-hemorrhagic. Eclipta alba also has traditional external uses; viz athlete foot, eczema and dermatitis. Some of its constituents have neutralized the toxicity and lessened the bleeding caused by snake venom 5 and mushroom toxins.

Boerhaavia Diffusa (Punarnava) is widely distributed in tropic and subtropic zones 6. “Punarnavine (an alkaloid)” is the active principle in its extract. It is exquisitely effective to cure renal problems 7, 8.

It is also useful in hepatitis, snake-bite, rheumatism, scabies, menorrhagia, angina, respiratory tract infections and as contraceptive. It is effective in the abdominal cancers 9. It also has antiviral activities 10, 11, 12, 13. These plants have been found to exert antihypertensive action also, but have got very scanty number of studies and references 14, 15.

Present study was done to observe the effects of these two herbs (separately and in combination) on normal and raised blood pressures; and to compare these effects with those of standard allopathic drug Amlodipine.

They were given food and water ad libitum and were kept in Institutional animal house under temperature, humidity and light & dark cycle-controlled environment [25 ± 2°C, 70%, 12 hrs’ cycle).

Dosage forms, doses and sources of Drugs: Drugs were given orally with the help of feeding cannula.

Standard Drug- Amlodipine (Amlo): This was given having been dissolved in distilled water (after pulverization of tablets). It  was purchased from market.

Test Drugs: EA (Eclipta alba) & BD (Boerhaavia diffusa)– dried crude forms had been procured from IITC/Organic India Pvt. Ltd., Lucknow, India. Then their extracts were prepared. Extracts were given having been dissolved in distilled water just before administration. Extracts were otherwise kept at 4°C. {Dose of EA - 200 mg/kg 17; Doses of BD- 200 mg/kg18 and 100 mg/kg}. To see the combined effect; EA & BD, each in a dose of 200mg/kg were given together.

The ethanolic extract was concentrated to dried residue by distillation (alcohol was allowed to evaporate). The thick paste thus obtained was stored at 4oC till further use.

Statistical Analysis: Data were summarized as mean ± SD. Groups were compared by ‘two factor (groups × days) analysis of variance (ANOVA)’ and the significance of mean difference within & among the groups was assessed by Tukey post hoc test. A two-sided (α=2) p<0.05 was considered statistically significant. Analyses were performed on STATISTICA 6.0 (software). 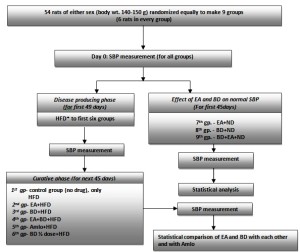 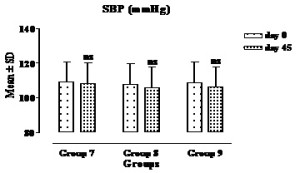 Among the groups, SBPs in all groups were found similar (p>0.05) at day 0 and day 45 (Table 2b and Fig. 2b). It indicates that the test drugs have not shown significant effect on SBPs of normal (healthy) rats (on normal diet). 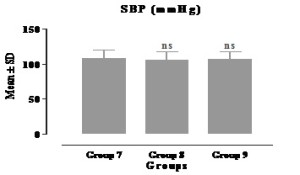 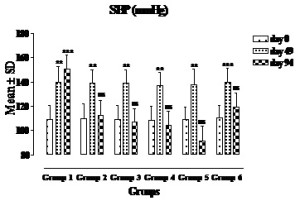 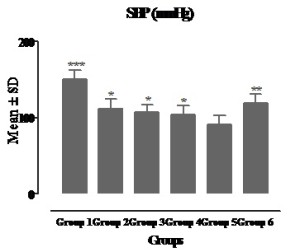 FIG. 4: GRAPHICAL RECORDING OF SBP OF A RAT AT DAY 0

Thus, Amlo was found to be most effective; followed by EA+BD, BD, EA and BD ½ dose; however, all drug-options produced significant improvement. EA and BD were found to be safe in a state of having normal BP. We chose two types of dose for BD because it seldom has previous studies on this topic. Amlo provides a therapeutic BP-steady state after a treatment for 6 weeks i.e., 42 days 23. Boerhaavia provides its appreciable effect in 30 days or so 18, 24. But, Eclipta alba has been found to establish its appropriate effect in 45-60 days 14, 17. Hence, we chose a period of 45 days for curative phase in our study. EAand its active constituent- culumbin, exhibit remarkable anti-hypertensive activity on anesthetized rats 25. EA is known to increase endothelium-dependent vaso-dilation in hypertensives 26. Diuretic effect, which contributes to its anti-hypertensive action, can be due to the potassium content of the leaves, as potassium is known to reduce BP through diuresis or increased sodium excretion 27.

In BD, Liridodendrin & Hypoxanthine are active antihypertensive agents and the former is Ca+2 channel antagonist; BD is diuretic by increasing renal blood flow, which contributes to its antihypertensive actions 15. Both the herbs are antihyperlipidaemic also, i.e., a property which helps in improvement of hypertension. Many of their other components may also play role separately or in combination against hypertension. Future works are undoubtedly needed to elucidate the concerned mechanisms.

Preclinical safety profile of EA and BD: In an acute toxicity study; it was found that alcoholic extract of EA was safe up to 5000 mg/kg p.o. (per oral) given to mice and no signs for behavioral as well as physical changes were found 28. On the other hand, decoction (which has activities almost equivalent to those of extract) of BD-leaves caused no signs of toxicity up to a dose of 5000 mg/kg (p.o.) in mice in another study 29.

In the present study, Amlo was found to be more efficacious than herbal drugs. This difference could be due to use of less-potent doses of EA and BD (i.e. 200 mg/kg of ethanolic extract), secondly due to short duration of treatment. Though, we started our test drugs with lower doses, but it is not so difficult to take these herbs in some greater amount, because these drugs are quite free from adverse or toxic effects even at much higher doses.  Longer duration is also not a major problem, because if the patient wants to compare, allopathic drugs are also taken for long period, sometimes lifelong; i.e. more studies with higher doses & longer durations are needed to be performed to evaluate our conclusions.

CONCLUSION: Study reveals that E. alba and B. diffusa are significantly effective remedies against hypertension. Also, if these herbs are taken together, greater benefit than any of the individual herbs was obtained in the study. These herbal drugs didn’t express any detrimental effects on experimental animals. Therefore, Eclipta alba and Boerhaavia diffusa, as a low-cost herbal therapy, offer an inexpensive, safe & effective measure to combat a major public health problem of hypertension.