INTRODUCTION: Aging is a biological process associated with a decrease in physiological, physical, and cognitive functions with the risk of neurodegeneration, metabolic syndrome and cancer 1. The most accepted theory is free radical theory of aging which states that excess free radicals cause adverse events and adds up to the process of aging and age-related pathological changes 2. D-galactose which is a reducing sugar when administered oral or subcutaneous to rats increases oxidative stress in mitochondria, and is an aging model for screening antiaging drugs. This aging model mimics the aging of humans and is characterized by telomere loss, altered telomerase activity in hippocampus 3, and also rise in thiobarbituric acid reacting

substances (TBARS) and low super oxide dismutase level in various tissues 4. Many evidences clarifies length of leukocyte telomere as one of the important biomarker in the process of aging 5, telomeres are present at the end of eukaryotic chromosomes as a continuous sequence of DNA and are essential for genomic stability and protective against DNA damage response 6.

Nutrition plays a key role in the prevention of aging onset diseases. PUFA is gaining attention as a supplement to combat aging. Eicosapentaenoic acid (EPA) and Docosa hexanoic acid( DHA)belongs to n-3 PUFA includes docosahexaenoic acid (DHA), which is present in avocado abundantly which are able to prevent or ameliorate many inflammatory conditions 7.

Wistar rats were housed in room temperature with free access to water and food. All procedures were approved by the Animal ethics committee and are in accordance with CPCSEA Guidelines.

Relative expression of the target gene in relation to beta-globin gene and samples were determined by the comparative Ct method 8, 9, 10.

DNA per reaction was used to construct the standard curve as instructed in the manual. 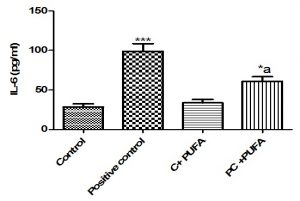 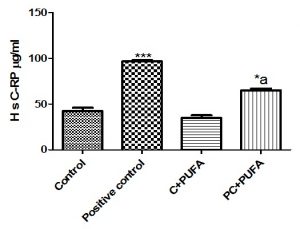 GRAPH 2: SHOWING RESULTS OF PLASMA HIGH SENSITIVE C-RP LEVELS IN GROUPS. N= 6 rats in each group, Values are expressed as Mean ± SD, One way ANOVA followed by Tukey’s test is used, ***p = 0.001 compared to control. *a p = 0.05 compared to control and positive control. p < 0.05 is considered as significant. 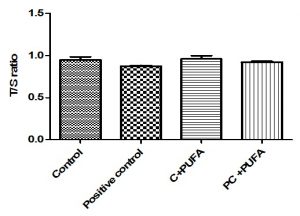 GRAPH 3: SHOWING RESULTS OF LENGTH OF LEUKOCYTE TELOMERE IN GROUPS. N= 6 rats in each group, Values are expressed as Mean ± SD, One way ANOVA followed by Tukey’s test is used, ***p = 0.001 compared to control, p < 0.05 is considered as significant.

PUFA has no Significant Effect on Telomere Length: From Graph 3 it is evident that PUFA had no significant impact on length of leukocyte telomere in treated and non treated groups.

DISCUSSION: In this study, the effect of PUFA on D-galactose induced aged male rats was evaluated using ELISA estimation of IL-6 and High sensitive C-RP levels in rat plasma. We demonstrated that PUFA due to its anti-inflammatory properties, has significant anti-aging effects.

Several studies has shown that Inflammation is one of the main cause for aging, since senescent cells release inflammatory markers and cause disruption of healthy functioning of normal cells leading to the cascade of aging process 11, 12, 13. In the present study PUFA significantly reduced plasma IL-6 and C- RP levels, this could be due to its role in improving antioxidant levels and also in balancing omega 6: omega 3 ratio, suggesting its potential role in ameliorating age related inflammations.

Telomeres are present at the end of chromosomes which are essential for genomic stability and is helpful in preventing the DNA damage response 14 although many evidences has pointed the role of length of leukocyte telomere in aging and age related diseases which is attributed as one of the important hallmark in aging 15. Naturally telomere length shortens as we age and excessive shortening is prevented by telomerase enzyme; thus homeostasis between telomere length and telomerase helps in maintaining division of cells appropriately, if fails leads to the development of cancer 16, 17, 18. On the contrary several cohorts suggesting the correlation between telomere length and aging; some studies also state that leukocyte telomere length may not serve as a true biomarker in aging since several infections tend to decrease telomere length like CMV and other infections.

Thus, CMV seropositivity and other cofounders must be ruled out before estimating telomere length. Recently a Newcastle study of 85+ showed no significant change in leukocyte telomere length and aging 19.

Interestingly in the present study, the length of leukocyte telomere was not significantly changed in any groups and also in the positive control; this could be due to the route of D-galactose administered since oral route administration has unpredictable bioavailability and also the duration of an experiment could also have been influenced since leukocyte telomere length is dependent on several factors 20. Thus, it has to be ruled out in future studies.

Thus, in the present study PUFA significantly reduced inflammation associated with aging in D-galactose treated Wistar albino rats and could be useful as a potential anti-aging drug. Further molecular studies and clinical trials are required to know its mode of action and efficacy.

ACKNOWLEDGEMENT: We would like to thank our Dean, Dr. P. S. Prakash KSHEMA, and all our colleagues Department of Pharmacology, for extending support and encouragement in conducting this study.

SOURCE OF FUNDING: Self