ABSTRACT: In the present study, the effort has been made to formulate the effervescent bioadhesive vaginal tablet of Metronidazole for localized treatment of Bacterial vaginosis. Among various bioadhesive polymers carbopol 934P, hydroxyl propyl methylcellulose K4M, methylcellulose, and sodium carboxymethyl cellulose were selected. Eight different formulations were made using a single polymer as well as a combination of two polymers in 1:1 ratio by direct compression technique. Formulations containing carbopol 934P alone (F4), carbopol 934P and sodium CMC in 1:1 ratio (F8) and carbopol 934P and hydroxypropyl methylcellulose K4Min 1:1ratio (F6) showed high, medium and low swelling behavior and bioadhesion property respectively and other formulations were found to disintegrate in 1 h time during swelling study as well as during dissolution study. In-vitro drug release was found to be 51.03% for F4, 42.98% for F8, and 34.87% for F6 at 12 h. F4 was found to release half of the total drug in 12 h. Based on swelling behavior, bioadhesion test, and in-vitro drug release, F4 was selected as the best formulation. In-vitro drug release data were fitted in various kinetic models in which drug release data were found to follow zero order kinetics and Korsmeyer-Peppas model. Stability study was conducted for F4 formulation as per ICH guidelines and showed no significant changes. From the research, it was found that the carbopol 934P can be used to prepare once a daily vaginal tablet for sustaining the localized release of metronidazole in Bacterial vaginosis.

INTRODUCTION: Bacterial vaginosis (BV) is the most common cause of vaginal symptoms, including vaginal discharge among women. The prevalence in the United States is estimated to be 21.2 million (29.2%) among women ages 14–49, based on a nationally representative sample of women who participated in NHANES 2001-2004 1. BV is caused by an overgrowth of various bacteria.

In case of no symptoms in BV sometimes physicians prefer to go for no treating option, however, it is always advised to have antibiotic treatment in case of pregnancy because of possible complications like early labor, miscarriage, having a low birth-weight baby or developing an infection of the uterus (womb) after childbirth.

A usual oral dose of 400-500 mg b.i.d. of Metronidazole for at least one week is prescribed in BV. However, oral dose has various side effects like nausea, vomiting, metallic taste, and risk associated with pregnancy and breastfeeding 2. Vaginal bioadhesive preparations are emerging as a new type of controlled-release dosage form for the treatment of both local and systemic diseases.

Vaginal bioadhesive delivery may offer several advantages over the other routes of administration for drugs which are susceptible to gut or hepatic metabolism or which cause GI side effects or those drugs which are systemically administered for the local vaginal condition. The greatest advantage of such dosage forms is the possibility of maintaining them in the vagina for extended periods thereby enabling lower dosing frequencies as well as possibility of decreasing the total drug utilized for the local condition of vagina 3. Among various possible bioadhesive polymers, carbopol 934P, hydroxyl propyl methylcellulose K4M (HPMC K4M), methylcellulose (MC) and sodium carboxy-methylcellulose (Sodium CMC) are frequently used candidates for bioadhesive preparations due to their characteristics of nontoxic, nonirritant, high bioadhesive strength and easy incorporation with the drugs 4, 5.

A study was done by Ferris DG et al. showed that oral Metronidazole 500 mg twice daily for 1 week and 0.75% Metronidazole vaginal gel 5 g (i.e., 37.5 mg of Metronidazole) twice daily for 5 days achieved nearly equivalent cure rates for the treatment of BV. Patients treated with these agents experienced similar rates of post-treatment vulvovaginal candidiasis, but those using the intravaginal products reported being more satisfied with the treatment 6. It is clearly shown that the vaginal gel is more effective with low dose; however; the gel is highly concerned with patient compliance due to its flow property and difficulty in administration.

Therefore, in this study, an attempt has been made to formulate the effervescent bioadhesive vaginal tablet of Metronidazole with reduced dose compared to oral tablet and which will also address the compliance problem associated with vaginal gel with the adhesive nature of the tablet. Citric acid and sodium bicarbonate was used in a 1:3 ratio for effervescent. HPMC K4M, carbopol 934P, sodium CMC, and MC were selected to prepare tablets, and the prepared tablets were evaluated for swelling behavior, bioadhesive strength, and in-vitro drug release profile. Bioadhesive tablets were prepared by direct compression method to reduce the production process and cost so that the therapy will become economical.

Pre-Formulation Study: Weighed quantities of all ingredients except magnesium stearate and talc were blended in glass mortar uniformly and were passed through 80 mesh to get fine particles. Finally, magnesium stearate and talc were added as lubricant and glidant, respectively, and the final powder mixture was analyzed for the flow property. FT-IR study was done to check the compatibility of Metronidazole with the selected polymer.

Evaluation of Tablets: The formulated tablets of each batch were evaluated for hardness using Monsanto Hardness tester. Friability test was done according to the process mentioned in USP 7. Weight variation test was done according to the process given in the Indian Pharmacopoeia 8. For drug content study, 10 tablets of each formulation were crushed to powder and powder equivalent to 100 mg of drug was taken and dissolved in 100 ml of citrate buffer 4.8 and kept overnight for complete dissolution. The above solution was filtrated, and 1 ml solution was taken and diluted to 100 ml with citrate buffer and assayed spectrophotometrically at 276 nm by UV-Spectrophotometer (UV – Pharmasec 1700, Shimadzu). The assay was done in triplicate.

Swelling Study: 9 The weight of the tablet of each formulation was taken before the study (W1) and was placed separately in a 25 ml beaker containing 5 ml citrate buffer pH 4.8 at room temperature. Tablets were removed at different time intervals (i.e., 15, 30, 60, 120, and 240 min), wiped with tissue paper, and reweighed (W2). Measurement of the swelling index was halted for different formulations at a different time when the erosion predominates the swelling process.

Ex-vivo Bio-adhesion Test: Various types of mucosa like rat intestine, pig oral, bovine sublingual, cow vaginal mucosa 10, 11 have been used as model biological tissues for the evaluation of bioadhesion. In this study, the fresh sheep vaginal mucosal membrane obtained from a local butcher shop has been used for the adhesion test. A simple apparatus was devised to measure the minimum detachment force Fig. 1. A fresh piece of sheep vaginal mucosal membrane (2.0 cm × 1.5 cm) obtained and was adhered to a piece of glass which was fixed in a plank, and the plank was assembled with a little crown block. After hydrating the mucosa with a drop of distilled water, the tablet was brought into contact with the mucosa by applying 200 g for 2 min. After the initial contact, the tablet was encircled by a firm plastic ring which fastened a light plastic beaker through the crown block. Then, little soil was dropped into the beaker at very slow rates until the tablet and mucosa were pulled apart by the gravity of soil. The beaker containing soil was weighed and the minimum detachment force was calculated 4. 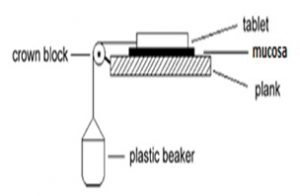 FIG. 1: THE SCHEME OF THE DEVICE USED IN THE BIOADHESION STUDY

In-vitro Release Study: The drug release rate was determined using USP dissolution apparatus II (Electro lab, TDT-08L). Tablet was attached to the 2 cm diameter glass disc and was kept in the bottom of the dissolution basket. 650 ml of Citrate buffer pH 4.8 was used as dissolution medium. The temperature was maintained at 37 ± 0.5 ºC, and RPM was set at 25.1 ml of sample was withdrawn every hour for 8 h and diluted to 10 ml with citrate buffer solution and 1 ml of fresh citrate buffer was replaced. The samples were assayed spectrophoto-metrically at 276 nm by UV-Spectrophotometer.

Accelerated Stability Study: Accelerated stability test of the best batch was carried out as per ICH guidelines, i.e. at 40 ± 2 °C / 75 ± 5% relative humidity for 3 months. At each month, tablets were taken and analyzed.

According to the angle of repose, all the formulation were showing flow property within the acceptable range 13 Table 2. From FT-IR study, it was found that Metronidazole was found compatible with the selected excipients.

All data are presented in average ± SD, n=3

Evaluation of Tablets: All the formulations passed the test for weight variation, friability, and drug content test as per IP14 Table 3. Formulations containing carbopol 934P were found having more hardness than other formulations. Hence, it was found that the level of hardness is directly affected by the amount of carbopol in the formulation.

Formulations without carbopol were found to disintegrate before one hour. From the study, it was found that the carbopol is showing better swelling behavior. 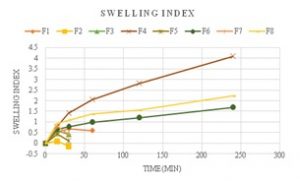 Ex-vivo Bio adhesion Test (Detachment Force Measurement): Formulations with carbopol were showing a high level of bio adhesion Fig. 3 due to the high level of swelling rate. The reason behind such proportional behavior might be explained by the availability of more surface area for bio adhesion after swelling or due to the interpenetration and entanglement of the bioadhesive polymer chains in largely swelled tablet and mucous polymer chains as supported by the diffusion theory 15. 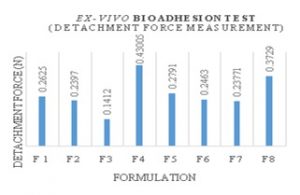 In-vitro Drug Release Study: The formulations F1, F2, F3, F5, and F7 were disintegrated within an hour time in the dissolution basket hence these formulations were excluded from the study as they do not satisfy the result objective. Only F4, F6, and F8 remained intact during the study hours without disintegration and release profile of these 3 formulations were examined. Drug release was 51.03%, 42.98% and 34.87% from F4, F8, and F6 respectively. The release rate of F8 and F6 was found to be slower than F4 Fig. 4.

F8 and F6 were not releasing the half of total drug within the 12 hours’ time; hence, may lead to the drug-retaining and dose dumping. The release profile was also found corresponding with the swelling rate. It was found that higher the swelling higher will be the release of the drug.

This can be explained by the presence of highly porous path and more fluid entrapment by the swelled tablet that enhance the drug release through the pores and fluid path as well as due to the erosion of the polymer chain after swelling as obtained from the kinetic study Fig. 5. 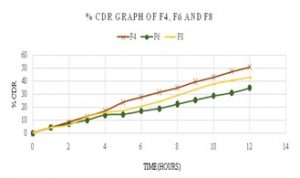 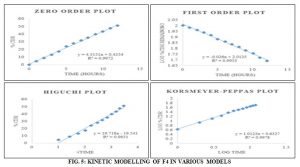 Accelerated Stability Study: The selected formulation F4 was subjected to accelerated stability test at 40 ± 2 °C / 75 ± 5% Relative Humidity for 3 months as per ICH guidelines. At each month, tablets were taken and analyzed for hardness, drug content, swelling, bio adhesion, and in-vitro drug release. From the study, it was found that the drug is stable, as the changes in the property of tablet were not statistically significant.

CONCLUSION: Various 8 formulations were prepared using 4 different polymers in single and combination. Pre-formulation parameters of all the formulations were found within the acceptable range. The post-compression parameters, like weight variation, hardness, friability, and drug content were within the prescribed limit. It was found that the carbopol 934P is vital in preparing vaginal tablet as the presence of carbopol 934P directly improves the hardness, swelling, bio adhesion, and in-vitro drug release from prepared tablets.

The study revealed that formulation F4 prepared with carbopol 934P alone was showing high swelling and high bio adhesion as well as better in-vitro release rate (51.03 % at the 12th hour) than other formulations prepared with single and combination of the polymer. The in-vitro drug release rate of F4 was found appropriate to release the total drug in 24 h. Therefore, carbopol 934P alone can be used to prepare once a daily bioadhesive vaginal tablet for sustaining the localized release of a reduced dose of metronidazole in Bacterial vaginosis.

ACKNOWLEDGEMENT: The authors are thankful to the Principal, The Oxford College of Pharmacy, Bangalore, for providing necessary facilities for research work. Authors are also thankful to Mrs. Amritha V. for her help during the study.