Categories Menu
Home » EFFICACY AND MECHANISMS OF MEDICINAL PLANTS AS IMMUNOTHERAPY IN TREATMENT OF ALLERGIC RHINITIS: A SYSTEMATIC REVIEW

EFFICACY AND MECHANISMS OF MEDICINAL PLANTS AS IMMUNOTHERAPY IN TREATMENT OF ALLERGIC RHINITIS: A SYSTEMATIC REVIEW

EFFICACY AND MECHANISMS OF MEDICINAL PLANTS AS IMMUNOTHERAPY IN TREATMENT OF ALLERGIC RHINITIS: A SYSTEMATIC REVIEW

ABSTRACT: Allergic rhinitis is a common disease of immune system that negatively affects general health, quality of life, and social relationships. In the recent years, many studies have been conducted to discover novel treatments for this disease particularly using natural products. Here, we review findings of recent studies that harness medicinal plants and phyto-therapies in oriental medicine that have effectively reduced allergic rhinitis complications. We also assess the use of medicinal plants and their derivatives in oriental medicine to treat allergic rhinitis. In addition, these agents have been reported to be used in combination with each other or separately as complementary therapies and even, in some cases, alternative therapies instead of chemical drugs. These plants display their anti-allergy effects through affecting immunoglobulin and inhibiting different cytokines and interleukins. Medicinal plants and traditional approaches can still offer new therapeutic alternatives to researchers and pharmacists so that these alternatives may further contribute to allergic rhinitis drug discovery.

INTRODUCTION: Allergic rhinitis, commonly are known as allergies or hay fever, is a type of inflammation in nose which occurs when the immune system overreacts to the allergens in the air. Allergy is the most common disorder of the immune system, and has affected around 20% of the population in US and Europe. The prevalence of allergy is growing worldwide.

Rhinitis influences quality of life due to associated complications 1, such as mucosal edema, runny nose, itchy nose, sneezing, coughing, shortness of breath, and wheezing 2. Rhinitis usually causes allergic conjunctivitis accompanied by itchy eyes. In addition to physical complications, certain psychiatric complications such as sleep disorders, anxiety, and cognitive disorders may develop due to rhinitis 3. Rhinitis is divided into two types: Allergic and nonallergic.

Despite availability of modern treatments, it is still common to trust the use of plants to treat rhinitis 7, 8. However, the mechanism of medicinal plants used to treat allergic rhinitis is unknown. Natural products such as medicinal plants are one of most important resources for discovering new drugs 9-15. Local people use them for prevention and treatment of various disorders 16-26. Also researchers have evaluated and confirmed their therapeutic properties 27-31. They can be used to produce more effective drugs if they are investigated in additional studies 32-36.  According to high prevalence of allergic rhinitis and its drug side effects and also growing use of plant-based compounds and drugs especially in East Asia, our aim is to investigate the findings of recent studies on the effects of medicinal plants and phyto-therapies in oriental medicine on immune system in treatments for allergic rhinitis.

Search strategy and Study design: As a main medical database in English language, Pubmed was searched using the following keywords: ethno-medicinal plants, ethnobotanical study, ethnopharmacology, phytotherapy, herbal treatments, and allergic rhinitis or respiratory allergy to retrieve relevant publications from 2010 until November, 2016. The data was collected independently by two authors. By using the above search terms, 546 articles, of which 58 articles were duplicates, were retrieved. After evaluation of the titles and abstracts of the retrieved articles, 35 articles that devoted to the effects of medicinal plants on allergic rhinitis were selected. Only articles with accessible full text in English language were selected for more evaluation. Accordingly, twenty-one articles were included in the final analysis.

The findings demonstrated that the symptoms and the rate of taking medications decreased after completion of treatment with this method 39. According to a method called Sanfu herbal patch, a collection of medicinal plants such as Semen sinapis, Radix kansui, Herbaasari, Rhizoma corydalis, and Ephedra sinica were applied to certain acupoints. Use of herbal patches, according to this method, was reported to be effective in treating allergic rhinitis because treatment with this method not only decreased nasal symptoms but also improved quality of life 40.

Scutellaria baicalensis and Eleutherococcus senticosus: Zhang et al., investigated S. baicalensis and E. senticosus for treatment of allergic rhinitis. After examining nasal mucosa tissues, they reported that these plants could modulate lipid mediators (PGD2, histamine, and IL-5). In addition, the synergistic effect of the two plants was greater than their effects when they were independently administered. Besides that, combination of the two plants inhibited pro-inflammatory, and Th1-, Th2-, and Th17-derived cytokines 41.

Nigella sativa: The effect of black cumin (Nigella sativa) essential oil, which is from family Ranunculaceae, was investigated on allergic rhinitis. This oil was found to decrease nasal mucosal eosinophil and exert optimal effects on stuffy, itchy, and runny nose. In addition, this plant can relieve sneezing attacks, turbinate hypertrophy, and mucosal pallor 42.

Silymarin: Silymarin is a flavonoid derived from the seed of a medicinal plant named Silybum marianum. Silymarin’s effects were investigated on human. A study on 94 patients with allergic rhinitis demonstrated that silymarin could reduce allergic indices (serum IgE, interferon-gamma, IL-4, and IL-5) and the severity of allergic rhinitis symptoms 44.

Phytoglycoprotein: Phytoglycoprotein is a derivative of Zanthoxylum piperitum DC fruit. This compound suppresses histamine (the most important mediator in incidence of Type 1 hypersensitivity), IL-4, and IgE. Phytoglycoprotein decreased degranulation of the mast cells as well as inflammation factors both in vitro and in mice with allergic rhinitis 45.

Biminne: This Chinese formulation consists of two active compounds to treat allergic rhinitis, namely icariin and astragalus saponin I. Investigating the effect of biminne on mice with allergic rhinitis indicated that this compound suppressed splenocyte proliferation and regulated the secretion of cytokines, IL-4, IL-5, and INF-gamma 46.

KOB extracts: KOB extracts is a polyherbal medicine consisting of Saposhnikovia divaricata, Atractylodes macrocephala, Astragalus membranaceus, Scutellaria baicalensis and Ostericum koreanum. A study demonstrated that combination of pseudoephedrine and KOB extracts could be a suitable treatment for allergic rhinitis 50.

KOB03: KOB03 is a herbal formulation consisting of Scutellariae radix, Osterici radix, Astragali radix, and Saposhnikoviae radix. This formulation was investigated in vivo and was found to decrease allergic rhinitis symptoms via suppressing certain cytokines such as TNF-a, IL-1b, IL-6 and IL-8 with anti-inflammatory effects 51.

A Chinese herbal formulation: This formulation consists of Xin-yi-san, Xiang-sha-liu- jun-zi-tang, and Xiao-qing-longtang that is used to treat allergic rhinitis and asthma. A study indicated that HLA-DR expression on dendritic cells was suppressed after treatment with this herbal formulation. In addition, CD4(+) T cells increased production of their IL10, and the production of TNF-alpha decreased 52.

BiRyuChe-bang (BRC): BRC is a Korean formulation that is used to treat allergic rhinitis. This blend is made by combining pine oil, lavender oil, and eucalyptus oil and can decrease the levels of IL-6 and TNF-alpha. Besides that, BRC suppresses histamine, mRNA expressions of TNF-alpha, IL-6, and IL8, and the activation of NF-kappaB in a human mast cell line (HMC-1). Therefore, this formulation can be used to treat mast cell-mediated allergic and inflammatory responses 53.

Xin-yi-san: This herbal formulation consists of roots of Asarum heterotropoieds rhizoma of Liqusticum sinense Oliv, Benth. et Hook, flower of Magnolia liliflora desr, dried roots of Angelica dahurica roots of Saposhnikovia divaricata chischk, rhizomas of Liqusticum wallichi Franch, dried rhizomas of Cimicifuga foetida L, rhizomas of Akebia quinata Decne and roots and rhizome of Glycyrrhiza uralensis Fisch. It was demonstrated that this herbal formulation could reduce the complications of perennial allergic rhinitis through exerting immunomodulatory effects such that it caused suppression of IgE and increased production of sICAM-1, IL-8, and IL-10 54.

According to the evidence, the medicinal plants, their derivatives, and several herbal formulations in oriental medicine are used to treat allergic rhinitis and, via different action mechanisms, lead to decrease in the symptoms or even treatment of this disease.

Action mechanisms: Allergic rhinitis is regarded due to an imbalanced Th1/Th2 cell-mediated response. Different parts of innate and adaptive immune system play part in the pathogenesis of allergic diseases particularly allergic rhinitis. The plants used to treat allergic rhinitis in oriental medicine can decrease allergic responses, through affecting most pathways involved in induction of  allergic responses, and therefore decrease the symptoms of allergic rhinitis and even display therapeutic properties (Table 1) such that the plants investigated in the cited studies were found to display anti-allergy properties through modulating the immune system reaction to allergens via inhibiting release or activity of mast cell mediators such as histamine, inhibiting inflammatory activity using their anti-inflammatory compounds, lowering and regulating IgE serum level, and lowering the activity of lymphocytes, particularly Th2 and TFH, and macrophages 32.

TABLE 1: THE ROLE OF PHYTOTHERAPY ON DIFFERENT CONSTITUENTS OF INNATE AND ADAPTIVE IMMUNE SYSTEM IN THE PATHOLOGICAL PROCESS OF ALLERGIC DISEASES

In addition, serum levels of eosinophile cationic protein 55 and OVA-specific IgG1 56, several interleukins, biogenic aminos, and interferon-gamma were reported to decrease after administration with medicinal plants or their compounds 44, 53. Besides that, anti-allergy medicinal plants affect chloride channel-3 and suppress secretion of MCP-1 and CIC-3, which play an important role in chemo attraction of the leukocytes to the sites of allergic responses and especially pathological process of allergic rhinitis, as well as VCAM-1 in the epithelial mucus and therefore controls inflammatory responses 56. Aside from the above mentioned, disturbing differentiation balance between Th2 lymphocyte and Th1 lymphocyte and their cytokines is one of the most important mechanisms of allergic diseases. Recovering such balance is one of the targets of new treatments for allergic rhinitis.

Investigating the action mechanisms of the plants used at acupoints indicated that acupoint herbal plaster improved allergic inflammation via maintaining an appropriate balance between Th1 and Th2 cells and therefore inhibited the secretion of cytokines GM-CSF, IL-3, IFN-γ, and IL-2 by Th1 cells and that of IL-3, GM-CSF, IL-13, IL-10, IL-5, and IL-4 by Th2 cells 57, 58. These cytokines contribute to activation of JAK-STAT (regulator of activity of histamine mediators). For example, IL-13, which is one of the lymphocytes of Th2 and produces ILC2, plays a key role in exacerbating inflammatory response such that humanized monoclonal antibody against the fixed part of IL-13 was found to be greatly effective in improving allergy. A study demonstrated that plant-based compounds induced anti-inflammatory and anti-allergy effects through down regulating IL-13 via JAK-STAT pathway 57. Actually medicinal plants through several mechanisms can prevent the allergic rhinitis (Fig. 1). 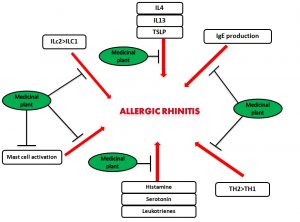 FIG. 1: THE MECHANISMS OF MEDICINAL PLANTS IN AMELIORATING ALLERGIC RHINITIS

CONCLUSION: Nowadays, with the raised level of public health, infectious diseases have declined but instead allergic diseases have become a main health issue of the community. Meanwhile, growing research is being conducted to develop new treatments based on a more in-depth understanding of the immunologic mechanisms of allergic diseases. Recovering hemostatic immune responses is the main feature of these treatments. In this regard, medicinal plants should not be disregarded because they are a rich source of compounds some of which have not yet been identified. The medicinal plants, used in oriental medicine and in different ways, induce anti-allergy effects through affecting immunoglobulins and inhibiting different cytokines and interleukins. These plants also prevent inflammation in nose and respiratory tract through exerting anti-inflammatory effects. The plants used in oriental medicine, especially Chinese medicine, can, in combination or separately, be used as complementary and even, in some cases, alternative treatment to chemical drugs. Altogether, this review confirms the value of a great number of medicinal plants used in oriental medicine to treat allergic rhinitis, which can represent a rich source for drug discovery in the future.