EFFICACY AND SAFETY OF AGOMELATINE IN TREATMENT OF MAJOR DEPRESSIVE DISORDER: A PILOT STUDY

EFFICACY AND SAFETY OF AGOMELATINE IN TREATMENT OF MAJOR DEPRESSIVE DISORDER: A PILOT STUDY

ABSTRACT: Back ground: Agomelatine is a novel antidepressant which acts through a combination of agonistic actions at MT1 and MT2 subtypes of  Mela­tonergic receptors and antagonistic actions at 5-HT2C subtype of serotonergic receptors. Objective: The study was carried out to evaluate the efficacy and safety of Agomelatine in the treatment of Major depressive disorder. Method: A prospective study  was conducted at outpatient department of Psychiatry, GSL Medical College & General hospital Rajahmundry, 76 outpatients between 18 to 65 yrs of age of either sex, who met DSM-IV-TR criteria for major depressive disorder and had a minimum depression score of  20 on HAM-D17 were assigned to 8weeks of treatment with Agomelatine (25-50 mg/day). The main efficacy outcome measured was HAM-D17 total score (change from baseline to last post-baseline assessment of 8 weeks). Secondary outcome measures were assessed on Clinical Global Impression- severity (CGI-S) and Clinical Global Impression–improvement (CGI-I) scales. Results: The study results showed that Agomelatine was effective in Major depressive disorder. HAM-D17 score reduced effectively from baseline to end of week 8 (p<0.05). The percentage of responders and remitters at end of week 8 were 56.57% and 26.31% respectively. The mean CGI-S and CGI-I scores improved from baseline to end of week 8 (P<0.05). Conclusion: Agomelatine as a novel agent with a unique pharmacological profile, showed good efficacy in reducing the symptoms of Major depressive disorder.

INTRODUCTION: Depression affects about 350 million people worldwide.1 According to World Health Organization (WHO) depression is the foremost cause of disability as measured by Years Lived with Disability (YLDs) and is the fourth principal contributor to the global burden of disease. By year 2020, depression is likely to reach the second place in terms of Disability Adjusted Life Years (DALYS) calculated for all ages.2

The lifetime prevalence of Major Depressive Disorder (MDD) is approximately16-17%. 3 In Indian context, a large sample survey conducted recently reported an overall prevalence of 15.9% for depression, which is similar to western world. Major depressive disorder is growing at an incredible rate. Studies done in primary healthcare settings in India have found depression in 21-84% of the cases. 4

In spite of advances in treatment, major depressive disorder is still a significant cause of morbidity and mortality, and is the chief cause of global disability. Present day antidepressants are failing to provide full remission, due to unfavorable side effects. In this scenario Agomelatine a new antidepressant with agonistic actions at MT1 and MT2 Melatonergic receptors and antagonistic actions at 5-HT2C serotonergic receptors 5 offers entirely a different approach in the treatment of depressive disorder. Central Drugs Standard Control Organization (CDSCO) approved the drug for marketing in India on 10th September 2012 for the treatment of major depression in adult patients aged between 18–65 years with normal liver functions. 6 Hence the present study was conducted to evaluate the clinical efficacy and safety profile of Agomelatine in the treatment of Major depressive disorder.

This is a prospective study of 18 months duration. Institutional Ethics Committee approval was obtained before initiating the study.

Inclusion criteria: Newly diagnosed male and female out patients aged 18 to 65 yrs who met DSM-IV TR7 criteria for Major Depressive Disorder (MDD), patients who had a minimum depression score of 20 on HAM-D17, single or recurrent Major Depressive Episode, without psychotic features were included in this study.

Depressive disorder due to general medical condition, marked suicidal risk, bipolar disorder, schizophrenia, OCD, anxiety, and any other axis –I and II disorders,  psychoactive substance abuse or dependence within one year prior to enrolment,  pregnant  and lactating mother, drug  allergy to Agomelatine and  patients with any organic disease were excluded. At screening, patients were subjected to detailed psychiatric and medical interview. The patients who met the inclusion criteria were explained in detail about the nature of the study, its purpose, procedure and follow-up, informed consent was taken from all the patients included in the study. Patients meeting the eligibility criteria were assigned to receive Agomelatine (25mg/once a day). The total duration of the medication was 8 weeks for each patient. The patients were advised to come for follow-up at the end of 2nd, 4th, 6th and 8th week of treatment initiation or earlier if needed. Patients who showed insufficient improvement of the depressive symptoms after 2weeks of treatment, the dose of Agomelatine was increased to 50mg/day. The efficacy of study medication was assessed by the investigator at every 2-weekly visit using the 17-item HAMD scale, 8 Clinical Global Impression-Severity (CGI-S) and Clinical Global Impression-Improvement (CGI-I) scores. 9 The efficacy was assessed by HAM-D17 total score, expressed as change from treatment initiation to the end of treatment period.

The score was used to check the intensity of the depressive disorder. The CGI-S was used to check the severity of the condition from baseline, while the CGI-I was to assess the improvement of depression after the end of 2nd week of treatment initiation.  Responders were defined as those showing a decrease of ≥ 50% in HAM-D17 total score from baseline and remitters were defined as those with a HAM-D17 total score less than 7. Laboratory investigations and ECGs were performed at baseline and at the endpoint of the study period. Adverse events reported by the patients, events observed during the study period or 6 days after last day of treatment were recorded.

RESULTS: Out of 90 patients enrolled, 76 completed the study and 14 lost to follow-up. Age of the treated patients ranged from 18 to 61 years and maximum number of patients were in the age group of 31 to 40 years (56.57%). The baseline demographic and clinical characteristics of the patients are shown in Table 1 and 2. The mean number of depressive episodes was 2.18 ±1.07. The median duration of the current episode was 4.5 months. 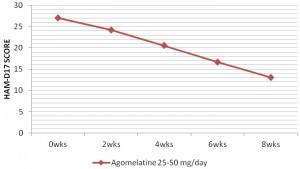 FIG.1: MEAN CHANGE OF HAM-D17 SCORE FROM BASELINE TO THE END OF THE 8TH WEEK IN TOTAL STUDY POPULATION. 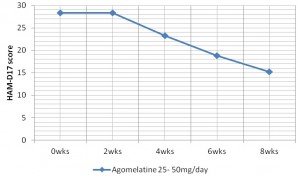 FIG.2: MEAN CHANGE OF HAM-D17 SCORE IN PATIENTS WHO RECEIVED A DOSE INCREASE AT THE END OF THE 2ND WEEK

Fig.1 Depicts that Agomelatine had a significantly (p<0.0001) lower mean HAM-D17 total score at the end of the 8th week as compared to the baseline in total study population. Fig.2 represents patients who received a increased dose; in them the mean HAM-D17 total score decreased significantly (p<0.0001) from the 2nd week of treatment initiation to the end of the 8th week. Table 3 represents proportion of responders and remitters after 8 weeks, and are 56.57% and 26.31% respectively. There was significant improvement in CGI-S and CGI-I scores from baseline to treatment end point in the total study population. The mean change of CGI-S was 2.73±0.7 which is found to be statistically significant (P<0.0001). After 2 weeks of treatment, the dose of Agomelatine was increased from 25 mg to 50 mg in those patients (34) who showed poor clinical response and this resulted in significant decrease in their scores (Table 4).

TABLE 4: EFFICACY OUTCOME OF AGOMELATINE IN PATIENTS WHO RECEIVED A DOSE INCREASE AT THE END OF THE 2ND WEEK

There were no serious adverse events reported by any patient during the entire study period. The most common adverse events noted in this study are nausea, headache and dizziness (Table 4). The laboratory investigations like biochemistry, blood picture and ECGs performed before and at end of therapy, did not show any significant change.

DISCUSSION: In this study of Agomelatine monotherapy in patients with Major Depressive Disorder, HAMD-17 scores and CGI-S scores decreased significantly. Biological rhythms have always been considered to be disrupted in depression.10 Agomelatine in a dose dependent manner inhibits the firing rate of SCN neurons (MT1) and directly resynchronizes and normalizes disturbances of circadian rhythm (MT2).11 Agomelatine also binds to 5HT2c receptors, albeit with substantially lower affinity than to the melatonin receptors. Nonetheless, it acts as an antagonist on these receptors, which contributes to its resynchronization of circadian rhythms, enhancement of dopaminergic and adrenergic input to the frontal cortex, induction of hippocampal neurogenesis, and ultimately, to its antidepressant effect.12, 13 The present study results found that the primary efficacy variable, ie total HAMD-17 score, improved considerably at the end of the 8th week of treatment compared with baseline (mean change of 13.3±9.2). This finding is consistent with Hale et al14 who noted a mean change of 17.3±7.3 in his study.

In the present study 44.74% of patients had a dose increase of Agomelatine from 25mg to 50 mg due to lack of clinical improvement. Kennedy SH et al15 study also had 37% poor responders, who improved after the increase of the dose of Agomelatine from 25mg to 50mg.  This study confirms that those who fail to show early improvement after receiving Agomelatine 25 mg for 2wks, responded well with 50 mg of study drug. The study findings are in line with other studies.15-17 Generally, the time taken for antidepressants to start showing a clinical effect is at least 2 weeks.18 This delayed onset of action is due to various factors, like the time needed for down regulation of several types of receptors and the time needed for neuroplasticity changes to occur, which are postponed because of a change in activity of receptors / transporters due to the action of different antidepressants. 19 Improvements in CGI-S and CGI-I scales were also noted in the study.

In Hale et al 14 study the percentage of responders are 71.7% and percentage of remitters were 32% at the end of study period.  Adverse effects are important causes for non-adherence to antidepressant treatment. In this study the common adverse events observed with both the doses were milder in severity and required no treatment discontinuation and all the study participants tolerated well. The most common side effects noted are nausea (23.68%) and dizziness (21.05%). Stahl SM et al 21 Montgomery S A et al 22 also stated that nausea, headache and dizziness as the most common adverse events of Agomelatine. There are certain limitations to this study. One such was lack of suitable active comparative agent and other was small sample size. Further studies with a larger sample size may throw more light in the evaluation of safety and efficacy of Agomelatine.