INTRODUCTION: Diabetes is a complex, chronic illness requiring continuous medical care with multifactorial risk-reduction strategies beyond glycemic control 1. Depending on the etiology of diabetes, factors contributing to hyperglycemia comprise reduced insulin secretion, decreased glucose utilization, and increased glucose production 2. Globally, 425 million people are affected with diabetes and Type 2 diabetes (type 2 DM) is also increasingly seen in younger adults nowadays. India is heading towards being the diabetes capital of the world indicating that every fifth diabetic in the world is an Indian 3.

Studies have shown that India has a potential epidemic of diabetes and by the year 2040, incidence of diabetes mellitus will increase 4. The treatment goal for diabetes is usually individualized based on patient preferences and disease factors 5. With the use of anti-diabetic agents in current therapeutic options, only 37% of the patients achieve a glycosylated hemoglobin (HbA1c) ≤7.0% 6.

Metformin is the first line therapy for type 2 DM but due to natural progression of the deterioration of beta cells additional therapies are often required to target various pathophysiological mechanisms. Sulfonylureas are the most common next therapeutic step when patients do not achieve or maintain glycemic control on metformin alone 7, 8, but they can cause hypoglycemia. Even the combination therapy may not be able to achieve glycemic control and insulin is often the subsequent choice.

Thiazolidinedione, which can be added to the therapy, may lead to edema and an increase in body weight. The risk of heart failure appears to be a class effect of the thiazolidinediones 9, 10.

Gliptins or dipeptidyl peptidase-4 (DPP-4) inhibitors are a relatively new class of orally administered glucose lowering agents for Type 2 DM. These drugs can augment the effect of incretin hormones, glucose dependent insulinotropic polypeptide and Glucagon like peptide-1. Compared to the other oral hypoglycemic agents, gliptins possess several clinical advantages like a negligible risk of hypoglycemia and weight neutrality 11.

Vildagliptin is an effective and well tolerated DPP-4 inhibitor and addition of it in uncontrolled patients on metformin monotherapy is associated with a significant improvement in the control of HbA1c 12.

Teneligliptin is another novel, highly selective DPP-4 inhibitor with long half-life, approved in Japan (2012) and in Korea (2014) to treat patients of type 2 DM. It is characterized by a considerably rigid structure formed by five consecutive rings 13, 14. Teneligliptin, 20mg/day as monotherapy and combination therapy in type 2 DM was shown to be effective in reducing HbA1c and fasting plasma glucose levels without any significant adverse events 15, 16. However the efficacy and safety of teneligliptin demonstrated so far is based on researches done over a short time period. Teneligliptin is currently marketed in India with limited number of available clinical studies and data comparing the efficacy and safety of the various DPP-4 inhibitors are very few.

Therefore, the present study was designed to assess the efficacy and safety of vildagliptin and teneligliptin in patients of type 2 DM.

METHODS: The present study was conducted in the Department of Pharmacology and Rajiv Gandhi Centre for Diabetes and Endocrinology, JN Medical College and Hospital, AMU Aligarh on the patients of Type 2 DM attending the OPD from March 2016 to September 2017. This was a randomized, prospective, open labelled and parallel group study. Eligible patients were randomized into two groups (Group 1 and Group 2) according to the table generated by random allocation software. The randomization was generated having 20 patients in each block.

Ethical clearance for the study protocol was obtained from the Institutional Ethics Committee (IEC) of J.N. Medical College and Hospital, AMU, Aligarh on 02.02.2016(D. No: 2249/FM).

Patients with type 2 DM having inadequate glycemic control on Metformin 500 mg twice daily were selected for the study. Patients on other oral antidiabetic agents and significant systemic illness were excluded from the study.

Informed and written consent was obtained from all patients before enrolling them in the study.

The patients were divided into two groups:

Group1: Vildagliptin (50 mg, twice a day) was administered as add-on therapy to all the patients of Group1 (n = 21) who were already receiving Metformin (500mg) twice a day

Group 2: Teneligliptin (20 mg, once a day) was administered as add-on therapy to all the patients of Group 2 (n = 19) who were already receiving Metformin (500 mg) twice a day.

The patients of all groups were followed up at 6, 12, 18 and 24 weeks. They were also advised to consult the endocrinologist / treating physician / investigator for any queries or adverse effect of medicines if occurring during the treatment period. All the patients were recommended to take diabetic diet as advised by the registered dietician of the hospital.

Flow Chart Showing the Distribution of Patients in the Study: 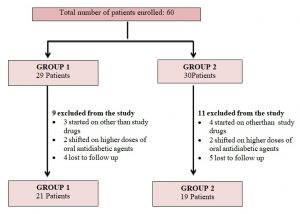 Efficacy Outcomes: The mean values of fasting plasma glucose (FPG) at 0 week (baseline) in Group 1 and Group 2 were statistically insignificant (p>0.05). The reduction in mean values of FPG, when compared to baseline, was significant, at all times points (at 6, 12, 18 and 24 weeks) within the groups (p < 0.001). However, the reduction in FPG in Group-1 and Group-2 at 6, 12, 18 and 24 weeks when compared with baseline values of two groups were found to be statistically insignificant (p>0.05) Table 1.

The values of HbA1c at 0 week (baseline) in Group-1 and Group-2 were statistically insignificant (p>0.05). The reduction in mean values of HbA1c, when compared to baseline, was significant, at all times points (at 12 weeks and 24 weeks) within the groups (p<0.001). However, the reduction in HbA1c in Group 1 and Group 2 at 12 and 24 weeks was found to be statistically insignificant (p>0.05) Table 3.

DISCUSSION: Metformin, the first line therapy for type 2 DM has been shown to delay the progression of diabetes patients by decreasing hepatic glucose synthesis and sensitizing peripheral tissues to insulin 20. However, the use of metformin may cause gastrointestinal disturbances, including diarrhea and nausea in almost 30% of patients 21, 22. Sulfonylureas often added to metfomin may cause hypoglycemia 23.

Gliptin when administered to patients inadequately controlled with metformin cause a considerable improvement in HbA1c (0.50–0.75%) with twice the number of patients achieving an HbA1c of <7% compared to metformin alone 24.

In the present study, vildagliptin (50 mg, twice a day) and teneligliptin (20 mg, once a day) were added in patients with type 2 DM inadequately controlled on stable doses of metformin (500 mg twice a day). Results showed a change in mean HbA1c-1.17% from the baseline in the Group 1 and -1.21% in Group 2 Table 3 at 24 weeks of study period. The vildagliptin as an add-on therapy with metformin have lower incidence of hypoglycemia compared to sulfonylurea group 27, 28.

Our study results showed adverse events similar in profile to the previous studies with no episode of hypoglycemia reported in either of the groups receiving vildagliptin or teneligliptin. The reduction in HbA1c, FPG, 2-h PPG was greater in the group receiving teneligliptin. This may be explained by the structural advantage of teneligliptin, which binds to the S2 extensive subsites via an ‘anchor lock domain’, and this interaction may be related to the increased strength of inhibition, the residual time for binding to DPP-4, and the long duration of action in-vivo 13.

Teneligliptin has a pharmacokinetic advantage of a longer half-life of 24.2 h and causes more than 90% inhibition of the DPP-4 activity even after a period of 24 h, which favors once a day regimen for this drug 14, 29.

Kadowaki K et al., (2015) reported that teneligliptin alone and in combination with sulfonylureas, metformin, the incidence of adverse events was similar in all groups except the combination with a sulfonylurea 28. There have been studies comparing gliptins to other classes of antidiabetic agents, but studies showing a comparison between the gliptins are very few. There are structural differences among the various gliptins and also in the manner they bind to the enzyme, DPP-4. These differences might be significant in terms of efficacy and safety.

CONCLUSION: Teneligliptin showed a reduction of mean HbA1c over a period of 24 weeks, which was comparable to that of vildagliptin when given with stable doses of metformin. Teneligliptin has a longer half-life and is administered once daily as compared to vildagliptin, which is administered twice daily. Patients in both the groups showed similar tolerability profile with no significant adverse event requiring a change in therapy. They cause lesser episodes of hypoglycemia and are weight neutral. However, long term safety and efficacy studies of Teneligliptin need to be done to establish its beneficial role in the management of type 2 DM.

CONFLICTS OF INTEREST: No conflicts of interest exist.