Conclusion: Although the active components were not isolated but antibacterial active plant principles such as flavonoids, alkaloids and tannins were observed in the extract. Methanolic extract of Desmodium triflorum possess effective antibacterial properties for (G+ve) bacteria

INTRODUCTION: Medicinal plants are a source of great economic value in the Indian subcontinent. Ancient wisdom has been the basis of modern medicine and will remain as one important source of future medicine as well as therapeutics.

The future of natural products drug discovery will be more holistic personalized; it involves wise use of ancient and modern therapeutic skills in a complementary manner so that maximum benefits can be accured to the community 1.Nature has bestowed on us a very rich botanical wealth and a large number of diverse types of plants grow in different parts of country.

India is rich in all three levels of biodiversity namely species diversity, genetic diversity and habitat diversity. Thousands of species are known to have medicinal value and the use of different parts of several medicinal plants to cure specific ailments has been in vogue since ancient times.

Herbal medicine is still mainstay of about 70-80 % of the whole population mainly in developing countries for primary health care because of better cultural acceptability, better compatibility with the human body and fewer side effects 2. However, the last few years have seen a major increase in their use in the developed world.

Nowadays multiple drug resistance has developed due to the indiscriminate use of commercial antimicrobial drugs commonly used in the treatment of infectious disease 3.In addition to this problem, antibiotics are sometimes associated with adverse effects on the host including hypersensitivity, immune-suppression and allergic reactions 4.This situation forced scientist to search for new antimicrobial substances. Due to the alarming incidence of antibiotic resistance in bacteria of medical importance, there is a constant need for new and effective therapeutic agents 5, 6.

Because of side effects and resistance that pathogenic microorganisms build against antibiotics, recently much attention has been paid to extracts thus biologically active compounds isolated from plant species used in herbal medicine. Plant based antimicrobials represent a vast untapped source of medicines and further exploration of plant antimicrobials needs to occur. Antimicrobials of plant origin have enormous therapeutic potential. They are effective in the treatment of infectious diseases while simultaneously mitigating many of the side effects that are often associated with synthetic antimicrobials 7. A successful chemotherapeutic agent must have selective toxicity. It must kill or inhibit the microbial pathogen while damaging the host as little as possible.

The degree of selective toxicity may be expressed in following terms:

Drugs vary considerably in their range of antimicrobial effectiveness 8. In over field survey the plant such as Desmodium triflorum is a small perennial trailing under shrub belonging to family Fabaceae (papilonaceae). Desmodium triflorum is found on wide range of soils most commonly in dry, distributed sites near the coast, on dry slops, lava flows also in lawns, pastures, waste places and along road sides.

Roots, leaves and whole plant are used traditionally. The leaves are galactagogue and grind with cow’s milk; they are given daily in the morning to children to treat diarrhoea due to indigestion as well as in convulsion. Roots are reputedly carminative, tonic, diuretic and used in bilious complaints 9.

Expressed juice from a well macerated plant, is applied to abcesses and wounds that do not heal readily. Its main actions include anti-spasmodic, sympathomimetic, central nervous system stimulation, curare-mimetic activity and diuretics. Crushed plant or a poultice of the leaves is externally applied on wounds, ulcers and for skin problems in general, apparently for its antiseptic properties. It is also used as forage, as a green manure and ground cover 10, 11, 12.

MATERIALS AND METHODS: The whole plant Desmodium triflorum was collected from the local dealer of medicinal herbs.   Plant was authenticated by National Botanical Research Institute, (CSIR) Lucknow- 226001, India and its authentication no. is LWG-008. Whole plant was washed properly to remove dirt, powdered well by grinding and avoiding the moisture contamination. This powdered drug passed through sieve for obtaining uniform particle size then powdered crude drug was dissolved in several solutions to determine their optimum solubility.

Preliminary Phytochemical Analysis: Aqueous and Methanolic extracts of whole plant of Desmodium triflorum were subjected to different chemical tests separately for the identification of various active constituents which are as follows:

The antibacterial activity of plant Desmodium triflorum was evaluated by agar disk diffusion method. Microorganisms were activated by inoculating a loopful of the strain in the nutrient broth and incubated at room temperature on a rotary shaker. Then 0.2 ml of inoculum (inoculum size was 108 cells/ml as per McFarland standard) was inoculated into the agar media and after proper homogenization it was poured into 100 mm disk. For the agar disk diffusion, the test compound was introduced onto the disc 7 mm disk and then allowed to dry. Thereafter, the disk was impregnated on the seeded agar plate. Experiment was performed 3 times under strict aseptic conditions. Microbial growth was determined by measuring the diameter of the zone of inhibition and the mean values were presented.

Successive isolation of botanical compounds from plant material is largely dependent on the type of solvent used in the extraction procedure. Traditional healers use primarily water as the solvent but we found in this study the plant extracts by methanol provided more consistent antimicrobial activity compared to those extracted by water. The results of antibacterial activity of plant Desmodium triflorum against the investigated bacterial strains are shown in Table 3 & 4. Methanolic extract produced incresed zones of inhibition comparative to aqueous extracts in the Kirby-Bauer analysis. This might have resulted from the lack of solubility of the active constituents in aqueous solutions while methanolic extracts showed some degree of antibacterial activity.

RESULTS & DISCUSSION: Desmodium species are commonly used for ethanomedicinal purposes. Number of herbal extracts described to have antibacterial activity. Herbal extracts usually used directly or indirectly for the preparation of many modern drugs 16.

This activity had compared with the Desmodum heterocarpon which showed weak antimicrobial activity showing ZOI of 8-9 mm using 400 µg/ml against (G+ve) bacteria 21 however Desmodium gyrans was found more active against (G+ve) bacteria having ZOI of 12-13 mm using 50 µl/disc 22. The Desmodium gangeticum had also showed high antibacterial potentiality with methanolic extract of whole plant 23. 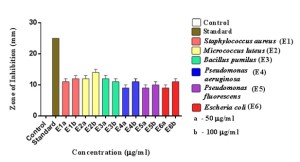 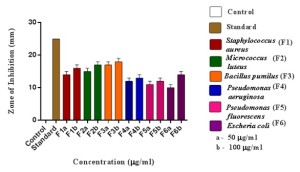