EFFICACY OF DRUGS IN DRUG-RESISTANT TUBERCULOSIS: A RETROSPECTIVE OBSERVATIONAL STUDY

EFFICACY OF DRUGS IN DRUG-RESISTANT TUBERCULOSIS: A RETROSPECTIVE OBSERVATIONAL STUDY

ABSTRACT: Introduction: Drug-resistant tuberculosis (DR-TB) emerged from the time anti-tuberculosis drugs were discovered and used. It has become a formidable obstacle in the eradication of tuberculosis. India is in second position after China with tuberculosis, where about 20% of patients with DR-TB were not treated due to inappropriate coordination and diagnostic facilities. Method and Materials: A retrospective observational study aimed to assess various resistance patterns, distribution among genders, and efficacy of DR-TB regimen (2016-2019). Institutional ethical clearance with approval from the state and district TB center were obtained, and a structured data collection form was created to collect patient details registered under Ernakulam district TB unit, Kerala, India. Data obtained were statistically analyzed with Mantel-Cox test using SPSS version 25. Results and Discussion: Study shows that rifampicin resistant tuberculosis (RR-TB) is most common form of DR-TB in newly diagnosed patients. In previously treated patients, both Multidrug Resistance and RR-TB were recorded as 38%. Rifampicin and isoniazid were drugs with high resistance and on comparing the efficacy, shorter regimen had higher efficacy than conventional regimen. High failure and death rates were observed with conventional regimen. Survival analysis showed a higher survival rate with shorter regimen. Conclusion: Resistance emergence was a very frequent obstacle to overcome with the existing established sensitive drug therapy against tuberculosis. The causes and factors remain unclear, but solution lies in innovative diagnostic approaches and individualized selection of drug regimens. Resistance, if continued to be unnoticed, could lead to a shortage of effective existing drugs, prompting the development of newer drugs.

INTRODUCTION: Drug resistance tuberculosis (DR-TB) has become an unavoidable obstacle in tuberculosis (TB) control and has emerged from the time anti-tuberculosis drugs were discovered and used 1. Increased number of resistances in patients and changing treatment regimens is a challenge in TB treatment.

Social habits like alcohol and tobacco smoking increase the existing risk of tuberculosis by a factor of 3.3 and 1.6 3. Due to the use of multiple drugs in TB treatment, patient adherence and corporation become a necessity. Along with these factors, the occurrence of side effects and adverse drug effects increase the burden of TB control.

Management and treatment of TB are strictly based on the drug susceptibility test (DST) and culture reports to provide appropriate treatment at the earliest. DR-TB is commonly seen in person with previous TB treatment history or treatment failure history, so a treatment regimen should be selected based on an appropriate diagnostic procedure. Inappropriate and irregular treatment facilities, cross-resistance, and bacterial mutations are the main reason for the spread of resistant strains in DR-TB patients 4.

Under the guidance of the revised national tuberculosis control program (RNTCP), a DOTS-plus strategy has been adopted to provide a customized treatment regimen for DR-TB patients based on DST reports. Depending on the duration of the initial phase, the treatment of DR-TB varies. It takes about 9-11 months for a shorter regimen and 24-27 months for a conventional regimen. Treatment of DR-TB becomes more challenging in special cases of pregnancy, children, HIV co-infection, renal and liver impairment, and other serious medical conditions 5.

There is an increased prevalence of MDR-TB cases in India, indicating the need for strict surveillance and treatment to provide a better clinical outcome 6. According to the Indian TB report 2019, there was a high risk of tuberculosis among working-age groups, which affects the development of the country. In the year 2018, an estimate of 58347 patients with MDR/RR-TB and 8809 patients with H mono/poly TB cases were diagnosed in India. Out of this, about 20% were not put on treatment due to inappropriate coordination and diagnostic facilities 7.

Following this, a study to assess various resistance patterns, efficacy, and safety of the DR-TB regimen was designed, which adds up a piece of new knowledge to society. Thus, the aim of the study was constructed to assess the variation in resistance pattern which had occurred in DR-TB cases, with special emphasis to identify which anti-TB regimen is more effective and safer in the treatment of drug-resistant tuberculosis.

Study Design and Study Settings: A retrospective observational study was conducted in the Ernakulam district of Kerala in India, under the district tuberculosis center (DTC), Ernakulam, which includes 8 TB units with 113 subunits.

Ethics, Privacy, and Confidentiality: The study protocol was approved by the Institutional Human Ethics Committee (IHEC), and the proposed plan of the study was approved by the State TB cell, District TB center (DTC), Operational Research (OR) committee, Directorate of health service, Kerala, India. Data was procured from medical records of registered patients and did not involve any kind of patient interaction; thus, the informed consent form was not applicable. Throughout the study, the privacy and confidentiality of patients and medical records were ensured under DTC.

Subject Recruitment and Study Participants: The study enrolled all patients registered under the Ernakulam district TB center under the norms of RNTCP during 2016-2019. The study excluded patients with HIV co-infection and those aged below 12 years due to privacy concerns. A total of 146 patients were included in the study after exclusion criteria.

Data Collection: The study recorded data using a collection form formulated based on RNTCP 8, and the data collection form included demographics details (age, sex), previous history, drug sensitivity pattern before and after treatment, the efficacy of treatment based on outcomes, etc. Each data was later cross-checked using district and concerned TB unit records.

Data Analysis: The recorded data were entered into excel 2016, and statistical analysis was performed using SPSS version 25 and G Power version 3.1.9.2. All data were expressed in frequency and percentage; the log-rank test was done to analyze the survival rate.

RESULTS: A total of 146 patients above 12 years of age were enrolled in the study. Many registered patients were not included as they were transferred to some other TB center or where sudden death occurred, even before the initiation of treatment. Out of the registered individuals, 78.76% of the patients were males, and 21.23% were females Table 1.

TABLE 2: DETAILS OF THE PREVIOUS HISTORY

On observing and comparing the type of resistance in patients with TB and comparing the sex with the type of TB in both males and females Fig. 1. It was found that the greatest number of cases were diagnosed with RR-TB (41.09%) and MDR-TB (40.4%). The middle line represents standard error. It was also estimated that the majority of patients who were newly diagnosed emerged with RRTB, whereas previously treated patients emerged mostly with MDR -TB Fig. 2. As previously treated patients are at high risk of developing resistance compared to others, a strict diagnosis and long-term treatment with more toxic anti-TB drugs have become essential. 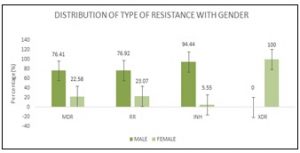 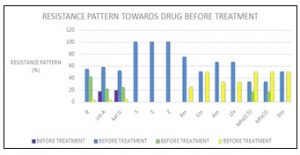 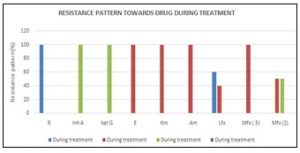 The data on the resistance pattern of tuberculosis towards each drug before the treatment and additional resistance that occurred during the treatment Fig. 3, 4 indicated that (excluding INH mono poly resistance), all patients are resistant to rifampicin (127). About 73.28% had isoniazid resistance because of Kat G or INH A.11.25% of the population have only resistance to the isoniazid. In total 26.02% had only rifampicin resistance. Resistance to other anti-TB drugs is quite low compared with Isoniazid and Rifampicin. One patient was identified with XDR TB. After R and INH, the drugs levofloxacin and ethambutol were observed with 6.84% & 5.47% of resistance, respectively. During treatment, many of them had additional resistance due to noncompliance and other individual factors.

In this study, the drugs with high resistance were INH and R, because being the main drugs in the standard regimen of TB treatment, their suboptimal administration may lead to high resistance.

According to Chien JY et al., 2015 and Basel K et al., 2019, the efficacy or positive outcome of INH monotherapy is 74% in Europe and 84% in China, but in this study, it was recorded as 60%. The probable reason was the chances of conversion to MDR are high, with low compliance to therapy and other confounding factors 11, 12.

Till now, only a few studies have executed a survival analysis of treatment regimens in DR-TB patients. In our study, the outcome of interest was to compare the survival analysis using Log-rank survival analysis of the four anti-TB regimens i.e., a shorter, conventional, INH mono and newer regimens. From the data obtained, the shorter regimen had a high survival rate and least with that of a newer regimen. Newer drugs such as Bedaquiline and Delamanid have reported serious adverse drug effects like QTcF prolongation which reduces the patient survival rate. More studies on the safety and efficacy of newer drugs are of great concern and require further analysis to establish safety.

These studies' main limitation was, being a retrospective study and thus did not obtain an opportunity for direct patient interaction and accurate patient follow up because of the longer duration of treatment in DR-TB patients and as many patients were still on treatment.

Only a Few studies till now have evaluated the resistance pattern, efficacy and survival analysis of the DR-TB regimen, which adds more strength to these findings.

CONCLUSION: The aim to wipe out TB is still a challenging task due to the emergence of resistance. So accurate diagnostic criteria and appropriate treatment regimen are the need of time. Resistance patterns should be studied carefully, and treatment modification to be promptly done with high effectiveness.

Our study concludes that while comparing to other regimens, a shorter regimen has high Efficacy and survival rate. RR-TB and MDR-TB being the most common form of DR-TB, INH and rifampin were the drugs with high resistance. The safety of newer drugs is under concern, and the exact efficacy of newer drugs in patients is not exactly found. More studies are required to conclude newer regimens such as Delamanid and Bedaquiline safety and effectiveness.

“Treatment without a cure is still a failure, so we must unite together to end tuberculosis.”

ACKNOWLEDGEMENT: We thank state and district Tuberculosis coordinators for their permission, support, and assistance given during the project period.

FUNDING: No funds were received by the authors.

ETHICS APPROVAL NO: Institutional ethical clearance was obtained (No:012/IHEC/10/2019/ NCP) along with permission from Kerala State TB cell No: 281/STC/DHS/2019