ABSTRACT: Background: Hypertension is one of the major risk factors for stroke, heart attack, heart failure, and kidney failure, thereby cause of deaths and disability worldwide. The most predominant type of HTN is essential hypertension (HTN). Unani scholars mentioned clinical manifestations and management of hypertension and have documented it under the context of ‘Imtila.’ The drug Sankhaholi (Evolvulus alsinoides Linn.) is one of the widely prescribed medicines for the management of essential hypertension in Unani medicine. Material and Method: Present clinical study was carried out to evaluate the efficacy and safety of Sankhaholi (Evolvulus alsinoides Linn.) in the management of stage-1 essential hypertension. Newly diagnosed 41 patients of Essential Hypertension (22 patients were in the test group and 19 patients in the control group) were enrolled and their clinical, as well as hematological parameters, were recorded at baseline, 21st day and 42nd day. All the patients in the test group were provided with the test drug 3 g powder of Sankhaholi which is to be taken twice a day for 6 weeks orally. Patients in the control group were given standard drug Ramipril 5 mg once a day for the same duration. Results: Both the test as well as the control drug had an extremely significant effect on the systolic blood pressure (p<0.001) while in diastolic blood pressure, control drug proved more effective (p<0.001) than test drug (p<0.01) comparatively. Also, affect the symptoms associated with hypertension. Conclusion: The test drug Sankhaholi (Evolvulus alsinoides Linn.) has substantial efficacy as an antihypertensive drug as demonstrated in patients of essential hypertension.

INTRODUCTION: Essential hypertension is a heterogeneous idiopathic disorder which accounts for about 90 to 95% of all cases of HTN 1. According to the World Health Organization (WHO), the prevalence of hypertension is 29.3% and 25.2% in Indian men and women respectively 2.

Antihypertensive drugs such as diuretics, beta blockers, calcium channel blockers, ACE inhibitors, vasodilators, etc. have been used in the allopathic system of medicine, but these agents may cause various adverse effects such as electrolyte imbalance, insomnia, bradycardia, and liver dysfunction. With these understanding, herbal drugs in Unani system of medicine mentioned in the literature for the management of hypertension could be tried for challenging the growing menace of hypertension.

Unani scholars were quite familiar with the clinical manifestations of hypertension under the entity ‘Imtila.’ The description of Imtila’ in which the body fluids are accumulated in different parts of the body particularly in the blood vessels, and could conceivably be referred to as “congestion” has been described to exhibit symptoms like headache, vertigo, epistaxis, etc. It has been further classified into “Imtila’ bi Hasbil Auiya and Imtila’ bi Hasbil Quwa” which are clinically observed in hypertension 5, 6. Generally, Imtila’ bi Hasbil Auiya (repletion regarding vessels) is the condition, where an increase in the blood volume occurs. Due to which the intra-arterial pressure is raised, the pulse gets hypervolemic and is hard to feel. Such patients develop the tendency of frequent epistaxis, headache, and visual disturbances and at times the rupture of vessels resulting in fatal complication 5.

Various single drugs, as well as formulations thereof, have been mentioned for the management of hypertension in Unani medicine with proven efficacy. The test drug Sankhaholi (Evolvulus alsinoides Linn.) has been used in the Unani system of medicine in various heart diseases like palpitation. Besides cardiovascular conditions, the drug has also been used for certain therapeutic actions like a diuretic, brain tonic, nervine tonic and as tranquilizer 7. The evidence put forth by researchers through preclinical studies as well as in the light of above, an opens, randomized, controlled clinical trial was carried out for evaluation of the efficacy and safety of Sankhaholi in the management of stage 1 essential hypertension. This study is intended to re-affirm the efficacy and safety of the Sankhaholi in the management of essential hypertension based on scientific parameters.

MATERIALS AND METHODS: The study was conducted throughout one year from October 2015 to September 2016 in Majeedia Unani Hospital, New Delhi. Before the execution of the study, the protocol was approved by the Institutional Ethics Committee of Jamia Hamdard on 19/08/2015 and was implemented by provisions of the Declaration of Helsinki and Good Clinical Practice (GCP) guidelines. A prior informed consent was obtained from each patient after providing the information sheet having the details regarding the nature of the study, the drugs to be used and the study procedure, etc.

It was a randomized, open, and standard controlled clinical study of duration one year while as, the duration of protocol therapy was for Six weeks (42 days) with the follow up at 2nd, 4th and 6th weeks. During the protocol therapy, patient in both the groups were asked to adhere to the diet according to the DASH eating criteria and daily brisk morning walk for 30 min. Patients of essential hypertension (Stage I hypertension based on JNC classification) has been enrolled.

Patients of both sexes within range of 18-60 years who are not taking any anti-hypertensive drugs were enrolled in the study. While the patients of stage II essential hypertension, secondary hypertension, diabetes mellitus, and other endocrine disorders, patients with systemic disorders like chronic liver, kidney or heart disease, etc., pregnant and lactating mothers and terminally ill patients with infectious diseases like AIDS and Tuberculosis, etc. were not included in the study. During the study if patients fail to follow up or sudden increase in blood pressure level more than >160/100 mm Hg was noticed, withdrawal from the study was done.

Out of 60 screened patients, 47 patients who fulfilled the inclusion criteria were randomized in to two groups test group A and controlled group B by computer generated randomization chart. Drug Sankhaholi was given in powder form in dosage of 3g twice daily after meal in test group A, while, the standard drug Ramipril in dosage of 5g was given once daily for the same duration in control group. Out of 47 patients, 41 completed the study and six patients dropped out. One subject out of six dropouts had systolic BP more than 160 mmHg at follow up, and the remaining five failed to follow up on specified time. 41 completed the trial with 22 patients in the test group and 19 patients in the control group.

Assessment of efficacy and safety was done on clinical and biochemical parameters before, at each follow-up and after the completion of protocol therapy as per the approved protocol. Haemogram, Liver function test, and kidney function test were conducted before and after the study to record the safety and tolerability of the drug.

Blood pressure measurement was taken with standard mercury sphygmomanometers in sitting position, where the patient's arm was fully bared and supported at the level of the heart. Cuff's bladder encircled 80 percent or more of the patient’s arm circumference. Mercury column was deflated at 2 to3 mm per second. The first and last audible sounds were recorded as systolic and diastolic pressure, respectively. For confirmation 2 sets of such readings on different occasions were recorded 8. Effect on both systolic as well as diastolic blood pressure was assessed at each visit and subjected to the comparison and analysis statically on 0 days, 21 days and 42 days.

TABLE 1: BASELINE CHARACTERISTICS OF THE PATIENTS 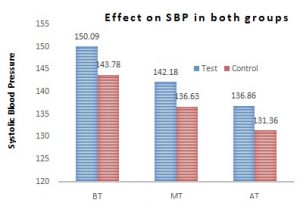 Assessment on the Symptoms of the Hypertension: 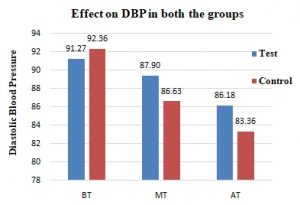 Headache: Headache is the main symptom in hypertensive patients, occurring especially in the morning. Before starting the treatment, 78% of patients in the test group and 77.27% patients in the control group complained of headache. For evaluation purpose headache was graded from zero (no headache) to grade 3 (severe headache) as per Visual Analogue Scale modified for the purpose. The percentage of improvement in the test group was 26.12% at mid treatment on 21st day and 73.97 % after completion of the protocol therapy on 42nd day, while in the control group it was 25.05 % on 21st day and 87.5 % on 42nd day respectively.

As for as the test drug is concerned apart from relieving headache due to its antihypertensive properties, also mentioned in classical literature too 7. The results in control group are obvious due to antihypertensive effect of the control drug.

Palpitation: Before treatment 78.4% patients complained of palpitation in the test group, while in the control group it was 72.72%. Palpitation was graded from zero (no palpitation) to grade 3 (severe palpitation) as per Visual Analogue Scale modified for the purpose. The improvement as indicated by percentage change in the test group was 28.61% on  21st day and 90.56% at the end of protocol therapy on 42nd day, while in the control group it was 46.19% on 21st day and 84.64% on 42nd day. These results indicate that the test drug was effective in curbing palpitation than the control drug. The improvement in palpitation in test group can be attributed due to Mofarreh and Moqawwi-e- qalb properties of Sankhaholi as mentioned by Scholars of Unani system of medicine 7, 9.

Breathlessness: Before starting the protocol therapy 31.81% patients complained of breathlessness in the test group and 15.78% in the control group.

For evaluation purpose, breathlessness was graded from zero (no breathlessness) to grade 3 (severe breathlessness) as per MRC Scale modified for the purpose. The improvement in breathlessness as indicated by percentage change in the test group was 24.04% on 21st day and 29.95% on 42nd day. In the control group it was 0% on 21nd day and 33.12% on 42nd day. These changes in the test group could be attributed to the fact that the test drug Sankhaholi (Evolvulus alsinoides Linn.) possesses antispasmodic action, and therefore it has been used therapeutically in several lung conditions traditionally 7.

Furthermore, contemporary research has also proven its effects as it controls the release of acetylcholine which at the level of mucosal glands and epithelial cells regulates mucus secretion via ciliary beat frequency and mucus clearance. Acetylcholine also modulates inflammation 10. 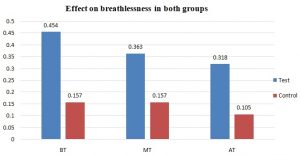 In a study, Evolvulus alsinoides inhibited 50% of AChE activity which otherwise inhibits the secretion of acetylcholine at concentrations of 100-150 microg/mL 11.

Hypertension was induced in nephrectomized rats by DOCA salt because of RAAS alteration. As DOCA salt induces reabsorption of salt and water leading to increased blood volume and hence blood pressure increased. There was also increased secretion of vasopressin leading to water retention and vasoconstriction. More potential effect is to alter the activity of Renin Angiotensin Aldosterone System (RAAS) leads to increased sympathetic activity by activating an ACE enzyme which converts angiotensin-I to angiotensin-II leads to vaso-constriction result in an increase in blood pressure. The results of this study suggested that the antihypertensive effect has been found due to ACE inhibitor mechanism of Evolvulus alsinoides Linn herb extract because the extracts lower the blood pressure as similar to enalapril which is an ACE enzyme inhibitor. (DOCA salt-induced hypertensive model) 3.

In addition to ACE inhibitor like activity, the test drug also has a controlling action on the secretion of acetylcholine which is known to cause smooth muscle relaxation and vasodilation of blood vessels which affect the blood pressure 10. On the safety parameters, the test dug did not exhibit any side effect. The test drug did not raise any significant safety issue during the study as no significant changes were observed in hematological parameters, liver function test, and kidney function test. Same was the case with the control group. Similar finding has been attributed to the test drug Evolvulus alsinoides Linn. viz. a safety profile by other researchers also 13, 14.